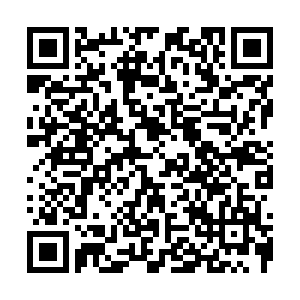 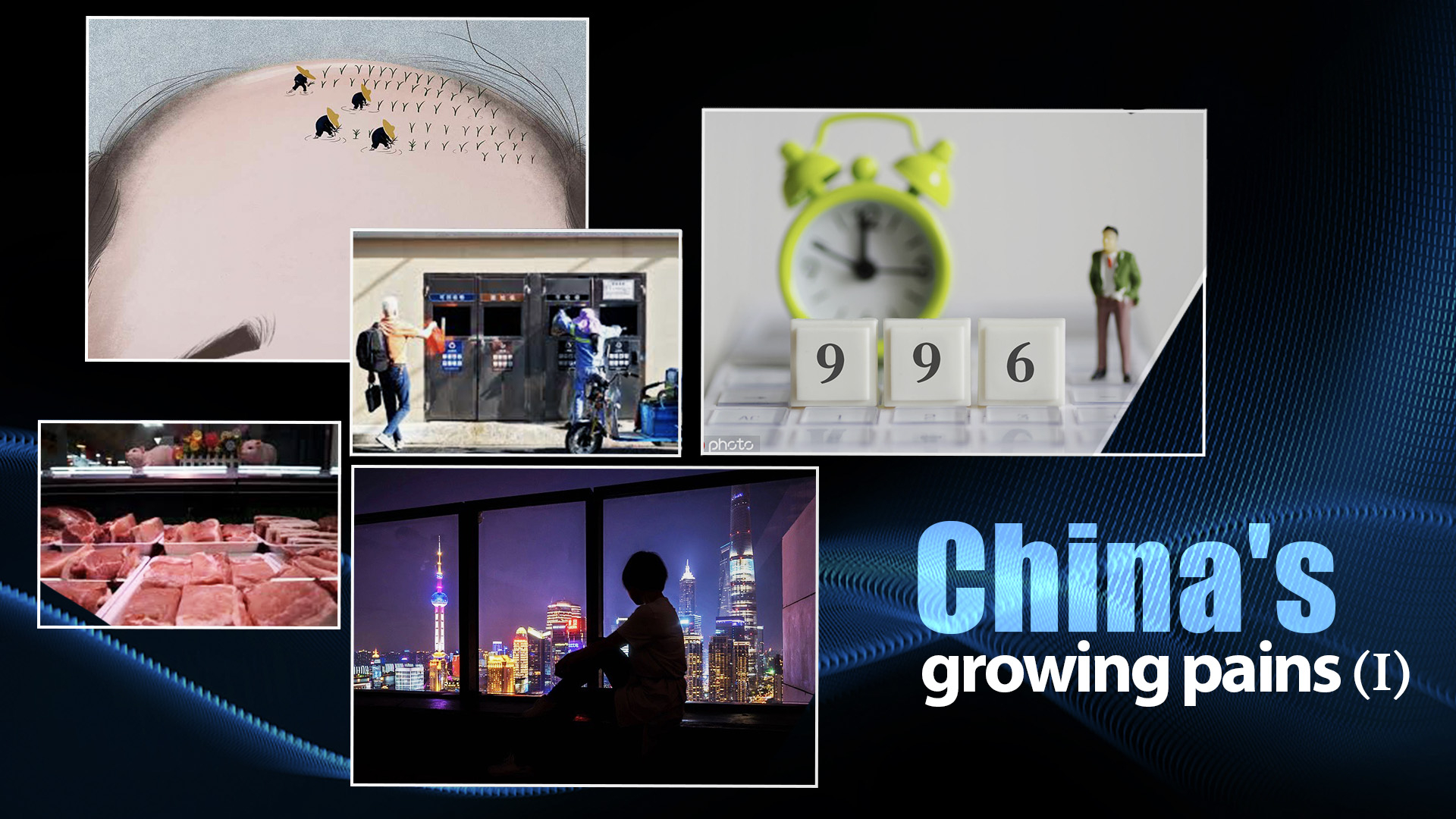 China's economic rise is the culmination of decades of astute planning, but problems resulting from such quick progress need to be addressed. As the year ends, let's rewind the phenomena that wove the social fabric and defined, in a way, the year of 2019.

The tech industry offers some of the most enviable salaries, but there's a catch: be prepared to work from 9 a.m. to 9 p.m., six days a week – a work schedule referred to as "996" in China.

China has a legal working week of 48 hours. However, there is an unspoken expectation within the tech industry for workers to work overtime almost regularly at the office, where they literally work till they drop.

The "996" lifestyle sparked heated public debate on office workers' well-being. "Developers' lives matter," said some from the Chinese tech community who created the GibHub campaign 996.ICU in April, suggesting that the grueling schedule could jeopardize workers' health and land them in the intensive care unit (ICU).

Public opinion is divided on whether this is acceptable. But China's prominent tech CEOs appear to be in agreement that it's a necessary sacrifice for success.

Alibaba's Jack Ma called the opportunity to work "996" hours a "blessing." "How do you achieve the success you want without paying extra effort and time?" he asked. On the other hand, Richard Liu, founder of JD.com, hit out at "slackers" who, he said, were not his "brothers".

The e-commerce tycoons' comments offered little consolation to the "996" workers, who rarely get paid for overtime.

After years of breakneck growth that produced multi-billionaires like Ma and Liu, China's tech sector has been showing signs of slowdown.

While those who made it during the boom swear by the "no pain, no gain" motto, newcomers in the saturated industry are expected to accept poor work-life balance as the norm and push their limits due to tough competition and less likelihood of rags-to-riches glory.

Read more: Behind '996' schedule: Work to a better life, not ICU 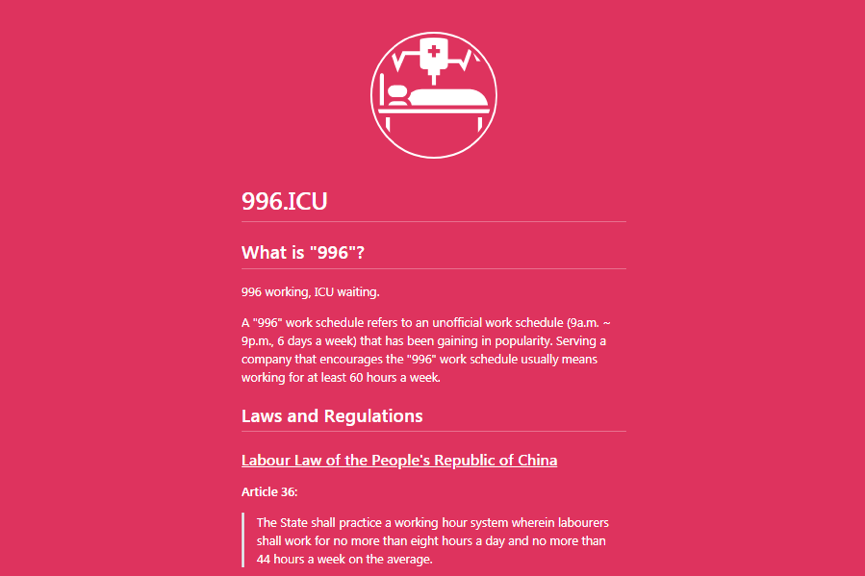 Screenshot of the 996.ICU Gibhub campaign.

Screenshot of the 996.ICU Gibhub campaign.

The contemporary Chinese youths have been bulk-buying Minoxidil as well as sesame snacks to ward off what should come much later in life: baldness. Over the past year, about 40 percent of all hair nutrition and restoration products sold online were bought by millennials, with hair loss concealers, hairline creators, hair building fiber and electric scalp massagers being the most popular products.

In 2019, the bald population in China reached an overwhelming 250 million, 60 percent of whom began losing hair at the age of 25 years. Apart from genetic and environmental reasons, hair loss among most millennials is increasingly due to anxiety. Many young people fretting about hair loss or gray hair are actually quite aware of the causes: irregular routines, staying up late, hectic schedules, and stress from messy interpersonal relationships and prohibitive living costs in metropolises.

Excessive anxiety interrupts the normal growth of hair, among many other symptoms, showing a state of being sub-healthy.

Perhaps the best way to bring your lush locks back is to take it easy. For many in the fast-paced modern workplace, it's simply a part of growing up.

Read more: The epidemic of hair loss for Chinese millennials 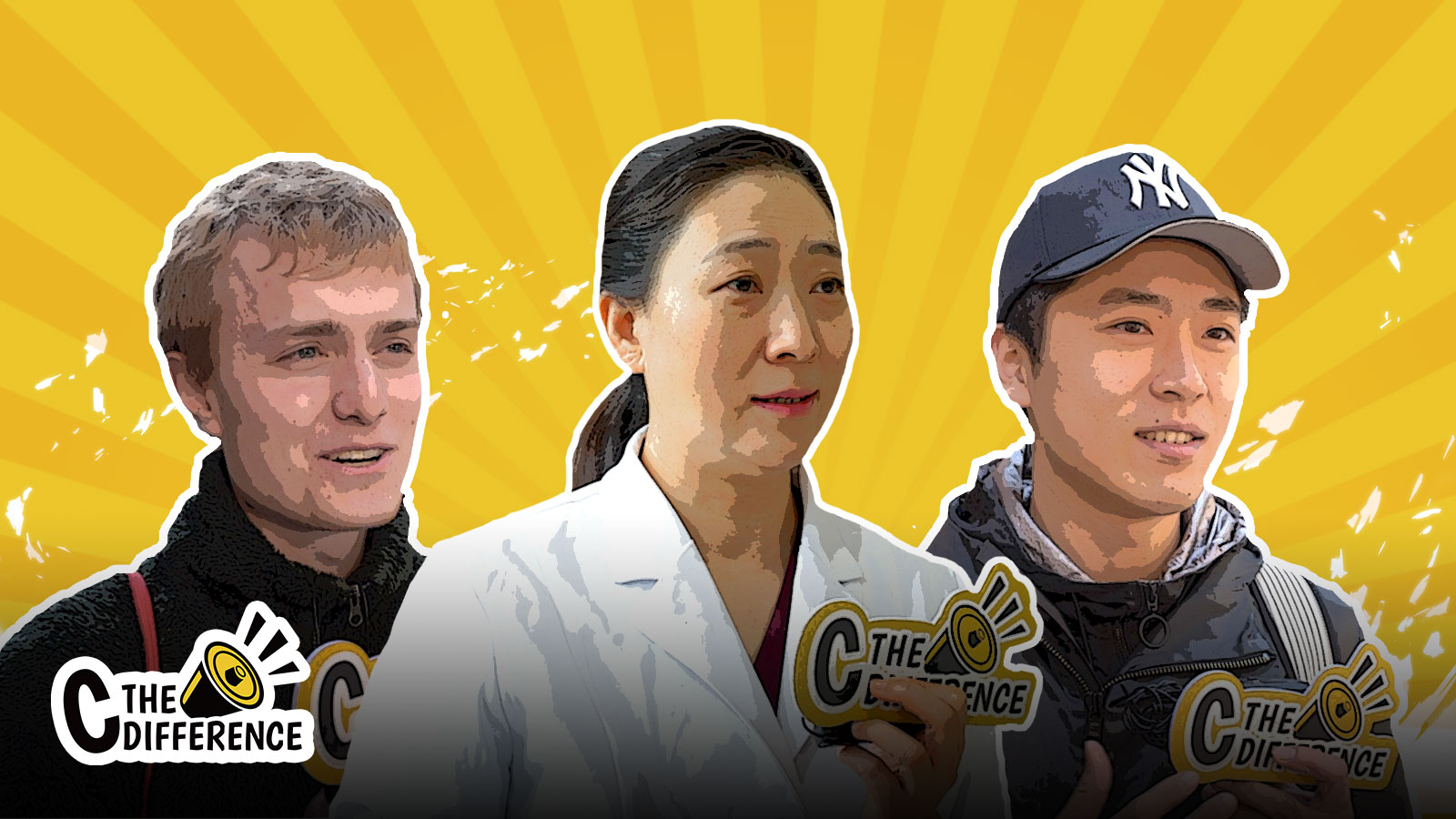 As China's burgeoning cities become more vibrant, their denizens are becoming islands unto themselves. Where interpersonal relationships are waning, certain industries are seeing growth. Many Chinese are now fueling the "loneliness economy," in which single-person karaoke booths and individual hot pot dining are all the rage.

The country is superseding Japan to become the new Asian capital of this trend. On the island country, the aging population has been linked to the rising feelings of loneliness – agencies even "loaned family members" to paying customers. China is also facing a growing elderly population, along with many working age migrants leaving their hometowns for the big cities.

Moreover, the elderly care business is becoming unsurprisingly big as traditional notions of children taking care of their parents in old age give way to nursing homes. Once considered desolate and "unfilial" accommodation, China's retirement homes are now providing hotel-level facilities, meal plans and around-the-clock staff – all at a price, of course.

Will China's development presage a future where individuals withdraw from the society, much like many youths in Japan, or one where the notion of community changes amid rapid urbanization? 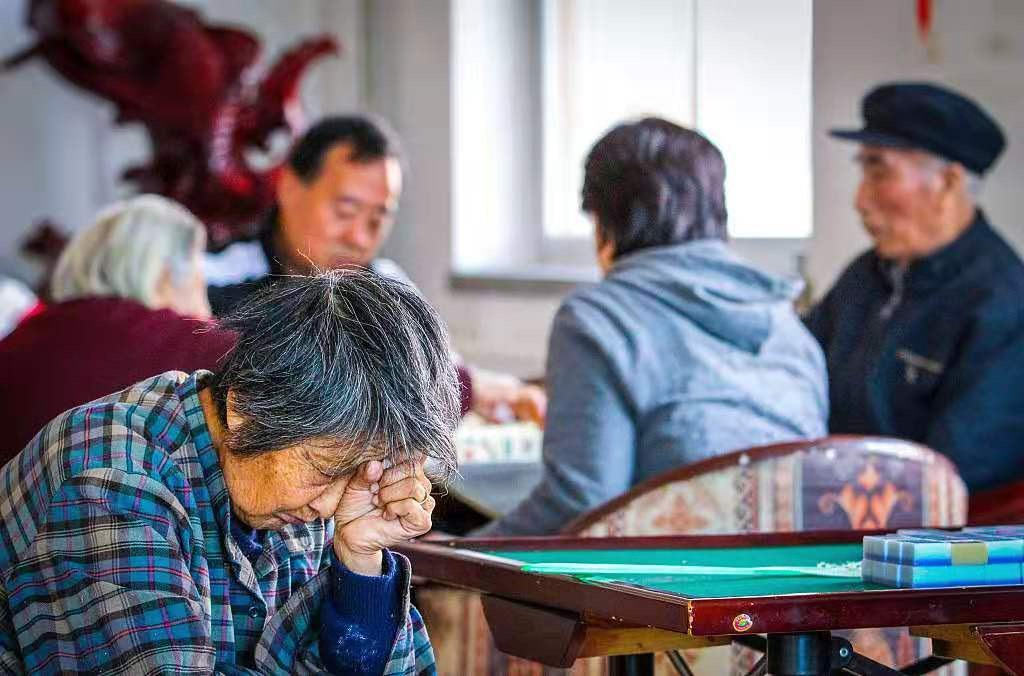 In 2017, the Ministry of Civil Affairs noted that the number of nursing homes in the country had tripled in five years.

In 2017, the Ministry of Civil Affairs noted that the number of nursing homes in the country had tripled in five years.

China was plagued by a huge pork shortage in the past 15 months, making the main staple food the new gold in the country. The deadly African Swine Fever cut China's hog herd almost in half, pushing the price of pork to a five-year high.

The spread of African Swine Fever has the effect of shaking up the domestic pork industry. Many small-scale farms, where half of China's pork production takes place, are about to be phased out of business due to damages done by the deadly disease. Large industrial-scale farms, which have the bio-security needed to prevent disease outbreaks, are expanding in scale. An industrial scale-up is likely to emerge out of the pork price crisis.

The skyrocketing prices risk putting pork out of reach of average consumers, especially low-income people. In a bid to curb pork prices, the Chinese government has taken measures ranging from releasing strategic frozen pork reserve to increasing pork imports. As many as 17 measures have been rolled out since the end of August to support hog production in China, including subsidies for building or expanding pig farms. China's pig herd is expected to recover to 80 percent of the pre-crisis level by 2020.

Read more: Pork the new gold in China due to deadly swine fever 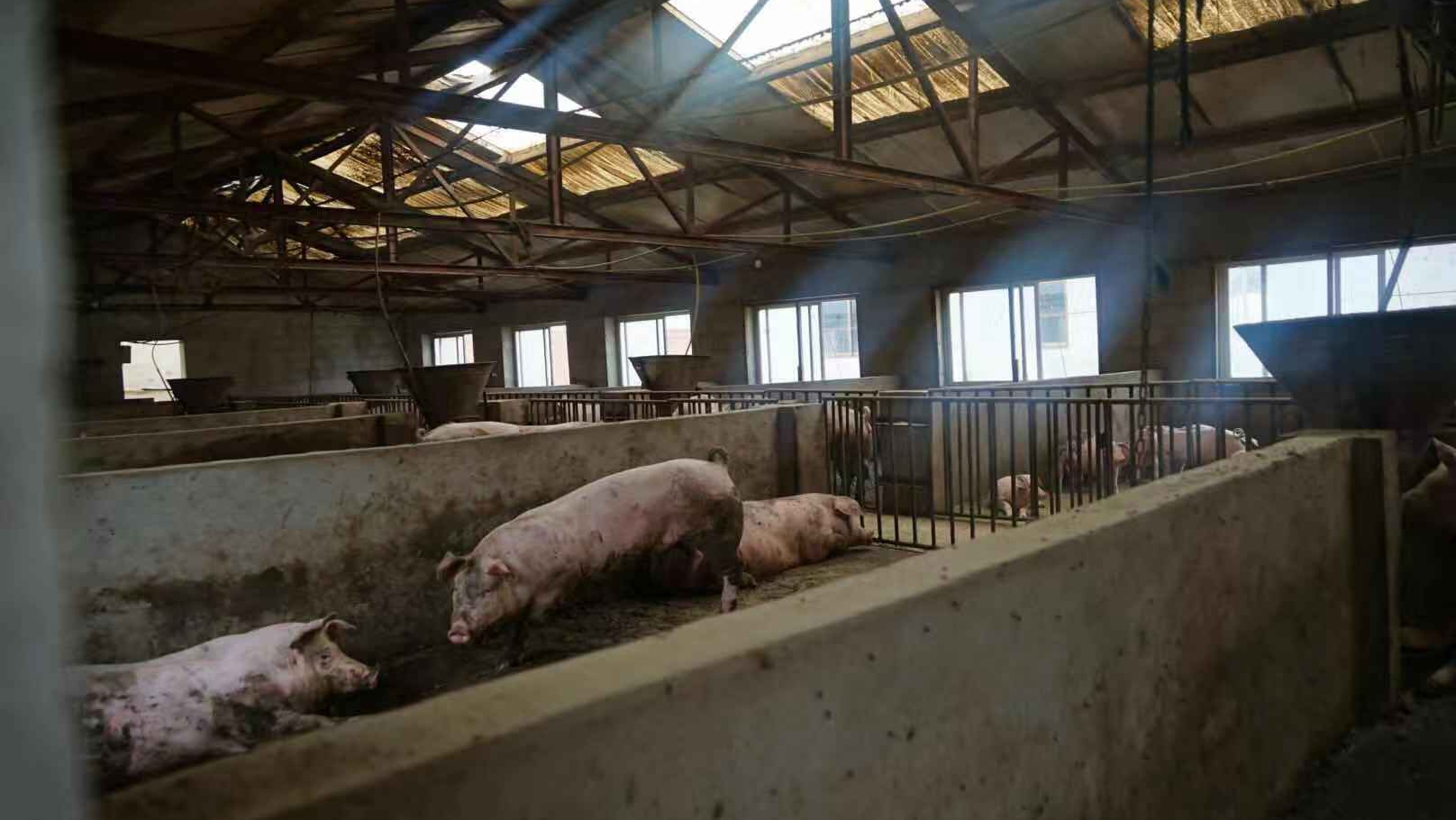 China gets serious with garbage sorting

For Shanghai's residents, 2019 will be remembered as the year of obsessing over trash, as the city led the way into an era of compulsory waste sorting in China.

In a nationwide drive to promote the development of ecological civilization, China's strictest-ever waste sorting and recycling regulations came into force in Shanghai, followed by dozens of other cities.

From July 1, Shanghai's 24 million residents are legally required to sort their household garbage into separate bins marked by four categories – dry garbage, wet garbage (kitchen waste), recyclables and hazardous waste. Failure to comply could result in a fine of up to 200 yuan (29 U.S. dollars) for individuals and as much as 50,000 yuan for companies.

The struggle was real in the beginning. Over the summer, Shanghai's new habit became talk of the country. The Chinese cyberspace was deluged with self-deprecating memes as people painstakingly tried to figure out which bin to dump their trash in.

With the garbage problem looming large in the public discourse also comes growing awareness of the human impact on environment.

An earlier scheme to encourage voluntary garbage sorting was introduced in 2000 in eight major Chinese cities. But it did little for China's recycling efforts over the past few years, and garbage was piling up faster than the country could handle. 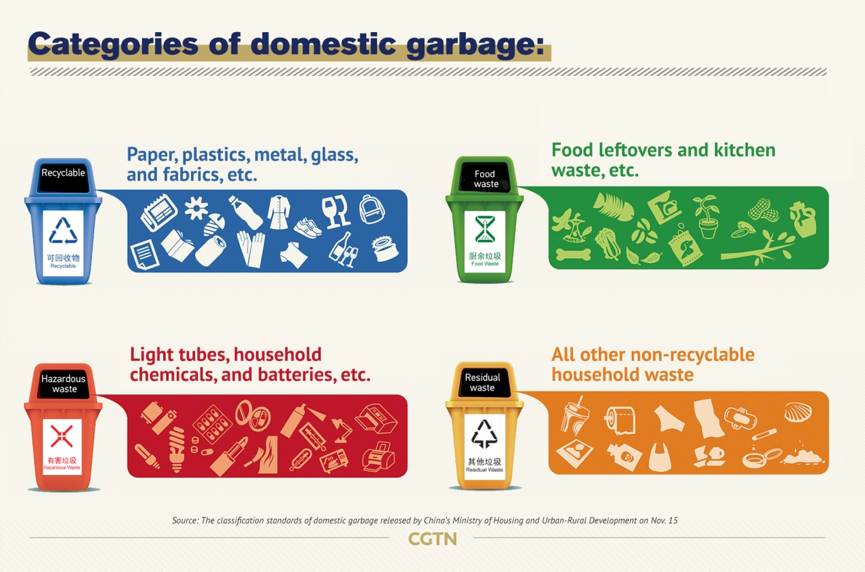 China generated 210 million tons of municipal solid waste in 2017, making it the world's second-largest waste producer after the United States, according to World Bank data.

Although the new rules can feel rigid and inconvenient at times, residents have expressed their willingness to learn and embrace a greener lifestyle.

Other cities including the capital Beijing have also begun managing their waste before wider implementation of the regulations in the coming year.