Battleground Iraq: Baghdad at the center of a U.S.-Iran proxy war
By Abhishek G Bhaya 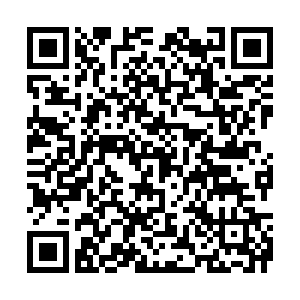 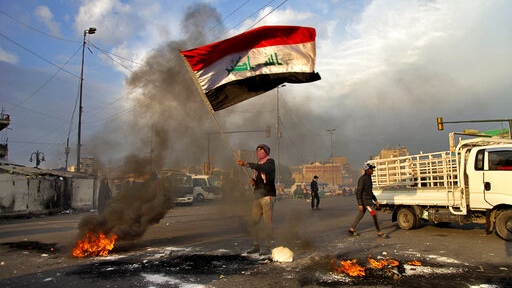 A protester waves the Iraqi national flag while demonstrators set fire to close streets near Tahrir Square during a demonstration to protest against rising escalation of Iran-U.S. tensions, in Baghdad, Iraq, January 8, 2020. /AP Photo

A protester waves the Iraqi national flag while demonstrators set fire to close streets near Tahrir Square during a demonstration to protest against rising escalation of Iran-U.S. tensions, in Baghdad, Iraq, January 8, 2020. /AP Photo

Iran on Wednesday fired more than a dozen ballistic missiles on two U.S. military bases inside Iraq. The retaliatory attack came just days after the head of Iran's elite Quds Force, General Qasem Soleimani, was assassinated near the international airport in the Iraqi capital Baghdad in a targeted drone strike authorized by U.S. President Donald Trump.

Ever since the U.S. and British forces invaded Iraq in 2003, Iraqis have feared being thrown at the center of the Iran-U.S. proxy war with many believing that the next all-out war between the two would be fought out in Iraq. The latest military escalation has not only made their worst fears come true but has also catapulted Iraq as the main battleground for a war that is increasingly looking more real than proxy following the recent turn of events.

While the decades-long hostility between the U.S., arguably the most powerful nation in the world, and Iran, home to one of the world's oldest civilizations, is all too well known, it is crucial to understand why Iraq is so pivotal for both Washington and Tehran in their struggle for influence in the Middle East.

Iraq and Iran are neighboring countries with a 1,500 kilometer-long border. The countries share historic and civilizational ties. Iraq was a province of Persia (old name for Iran) for centuries until the Arab conquest of Iran in the 7th century CE. Both Iran and Iraq are Shiite-majority countries. Shiites account for 90 percent of the Iranian population and 70 percent in Iraq, with most of the remaining population being Sunni.

In recent decades, both countries have had a tense and complicated relationship. In 1980, Iraqi President Saddam Hussain invaded Iran triggering an eight-year-long war in which thousands were killed. In 2003, Saddam's Sunni-dominated government was ousted in a U.S.-led invasion which resulted in the power balance shifting to Shiite-dominated political groups, some of which were allied with Iran.

Although opposed to Saddam's Baathist government, the U.S. supported Iraq during its war with Iran. However, after Saddam invaded Washington's ally Kuwait in 1990, the U.S. intervened and defeated Iraq in the Gulf War. Later in a 2002 speech, the then U.S. President George W. Bush's administration branded both Iraq and Iran as part of the "axis of evil," despite their contrarian positions.

After the 2003 invasion of Iraq, U.S. troops remained in the country purportedly to combat a violent insurgency. Ever since Saddam's ouster, Iran has steadily increased its presence within Iraq. Many experts believe Tehran has succeeded in outsmarting Washington within Iraq due to the politically dominant and majority Shiite community in Iraq who had looked to fellow Shiites in Iran for support.

The U.S. administration under former President Barack Obama withdrew American troops from Iraq in 2011 amid domestic political opposition but they were re-deployed in 2014 to fight the rise of Islamic State of Iraq and the Levant (ISIL) terrorist group.

While ISIL originated during the insurgency in Iraq in the aftermath of the 2003 invasion, it soon expanded to neighboring Syria and came to prominence around 2013. The self-proclaimed caliphate controlled a large swathe of territory from western Iraq to eastern Syria almost the size of the UK at its peak in late 2014. ISIL called for attacks on both Iranian and U.S. targets.

For both Iran and the U.S., who back opposing sides in the Syrian war, ISIL emerged as a more pressing problem at the time. A prolonged intervention by forces backed by Iran and Russia and sporadic spells of U.S-led airstrikes forced ISIL to cede its territory last year.

With Trump hardening Washington's position against Tehran since taking office in 2017, experts predicted that the collapse of ISIL increased the chance of a new conflict between Tehran and Washington.

Iraq was a fertile ground for Iran-U.S. escalation as it had troops and fighters from both camps inside its territory. About 5,000 American troops are deployed through military bases in Iraq, supposedly to aid Baghdad in its fight against ISIL.

Meanwhile, Iran had actively helped Iraq in the creation of Popular Mobilization Forces (PMF), a state-sponsored organization of some 40 mostly Shiite-dominated militias but also a small number of Sunni, Christian and Yazidi groups. The PMF was formed in 2014 and have fought in nearly every major battle against ISIL and successfully liberated lands held by the terrorist group.

Iran has long been suspected of running a network of proxies across the Middle East, which critics say allows Iran plausible deniability for anti-U.S. actions. In Iraq, Iran-backed Shiite militias have progressively raised their political clout winning nearly a third of the parliamentary seats in 2018 elections.

Tensions soared over the past year with frequent rocket attacks on bases used by U.S. troops in Iraq. On December 29, U.S. airstrikes killed about a dozen fighters of Iranian-backed Kataeb Hezbollah militia in western Iraq. The U.S. action came after it accused the militia for a rocket barrage at a military compound near Kirkuk, in northern Iraq.

After the strikes against Kataeb Hezbollah, a senior US State Department official emphasized the blame lay not just with Iran, but also with Iraq. "It is their responsibility to protect us, and they have not taken appropriate steps to do so," the official said.

Kataeb Hezbollah retaliated by dispatching a group of angry supporters to storm the U.S. Embassy in Baghdad's secure Green Zone on December 30. The apparent ease with which the Shiite militias were able to reach the U.S. Embassy surprised many observers.

Trump upped the ante further when he ordered the assassination of Soleimani last Friday, sending alarm bells across the world. Iran has retaliated by striking the U.S. bases in Iraq, escalating the conflict to a new high with many speculating if this is the beginning of another World War.

"This fits in perfectly with his desire for strategic redeployment in the Middle East to extract U.S. troops and civilians from the local hotspots and provide the Pentagon with greater freedom to act against its enemies. This means more drone attacks, Special Forces operations and guided missile strikes with minimum risk for U.S. personnel," Bishara elaborated.

While the American troops' pullout from Iraq certainly looks imminent at this stage, the analyst felt that it will remain "a far bigger deal for the U.S. after it invested billions of dollars and lost thousands of lives trying to keep hold of the country over the past 16 years."

Whether Iran can take advantage of the situation and further cement its influence in Iraq and the larger Middle East region, only time will tell. What is certain however is that Iraq will continue to face a violent future as the Iran-U.S. conflict escalates.

As the African proverb goes: "When elephants fight it is the grass that gets trampled."