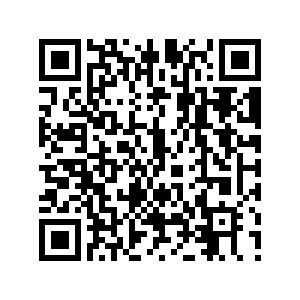 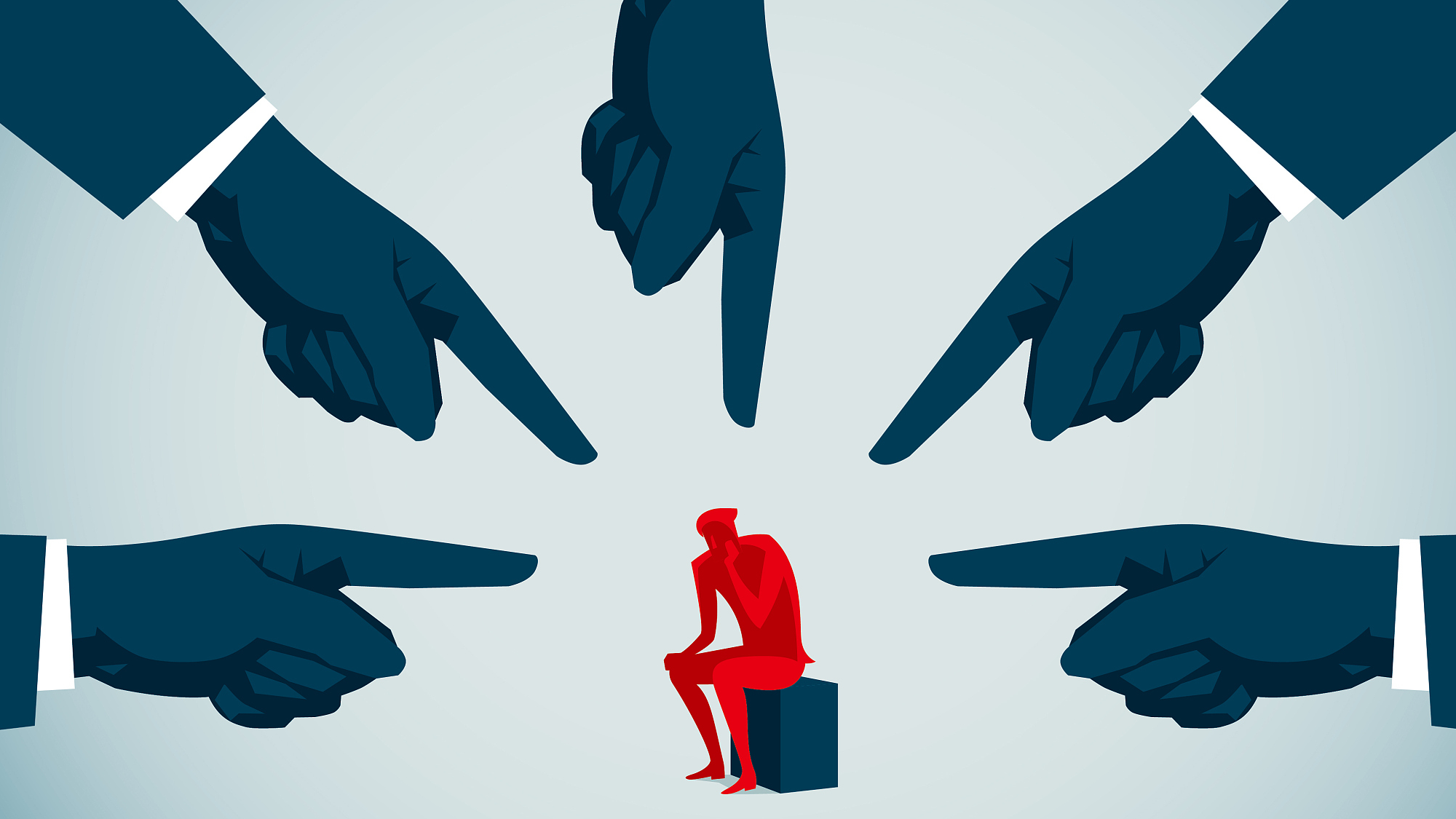 Editor's note: On April 10, longtime Shanghai resident John Darwin Van Fleet, who was in China through the 2002–2003 SARS epidemic, wrote this letter to his family in Los Angeles, his fourth to them in several weeks, updating them about the virus epidemic in Shanghai and around the country. (See the first three letters here, here and here.) Van Fleet is the director of corporate globalization at the Antai College of Economics and Management at Shanghai Jiao Tong University.

Hi all – it's been more than two months now since the Wuhan lockdown began. Looking back at my first letter to you, in early February, I can see that I was breathtakingly wrong about at least one idea I had: that this virus situation wouldn't become much more severe than the SARS epidemic had in 2003.

Our big neighborhood news is that the four-star hotel across the street has been turned into a quarantine center. While only PRC citizens and permanent residents are allowed to enter China now, all of them face a mandatory 14-day quarantine upon arrival.

At-home quarantine is permissible only for those who, for example, don't share kitchens or ventilation systems with others. The hotel across the street had been essentially vacant for two months, so it, and quite a few others around the city, have been repurposed. It is a bit of a win for the hotel operators in that they get at least some (discounted) room revenue.

The driveway on either side of the local quarantine center is now blocked, and you can see the folks in protective gear inside the door. The sign to the left says, "No Entry." When I tried to get a bit closer, I got yelled at by the guard, who also demanded that I delete all the pictures I'd taken. As you can see, I only pretended to do so! 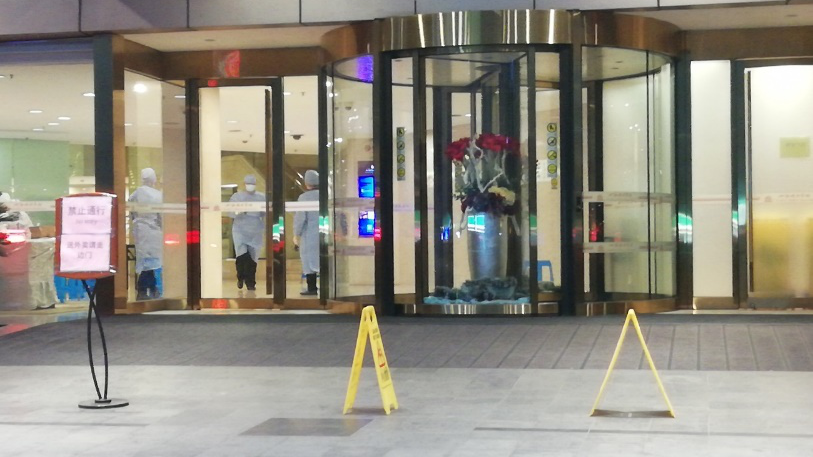 The city has, to me, reasonably determined that every city district should have centers for the returning residents of that district. And I conclude that this neighborhood is incrementally safer now, as every single person in the hotel has been tested and will be again – regularly – as are all the hotel staff.

And the place is sprayed or wiped incessantly, as are all the transport vehicles, etc.. But you may also easily imagine that there are plenty of NIMBY-type reactions to quarantine centers in neighborhoods – pointing the finger at 'outsiders,' the temporary neighbors.

I conclude that our risk is minimal in any event. Shanghai has a grand total of 500 cases, and no increase in weeks other than a few dozen imports, who are immediately taken to full-care isolation facilities. I guess the risk is ever-so-slightly greater at the baozi shop that's become my favorite indicator of local attitudes.

You can see in the photo below that not only is business back to normal, but any pretense of social distancing is gone. The sign exhorting such distancing, which was doing lonely and unheeded sentinel duty for about a week just to the right of the counter, has disappeared. 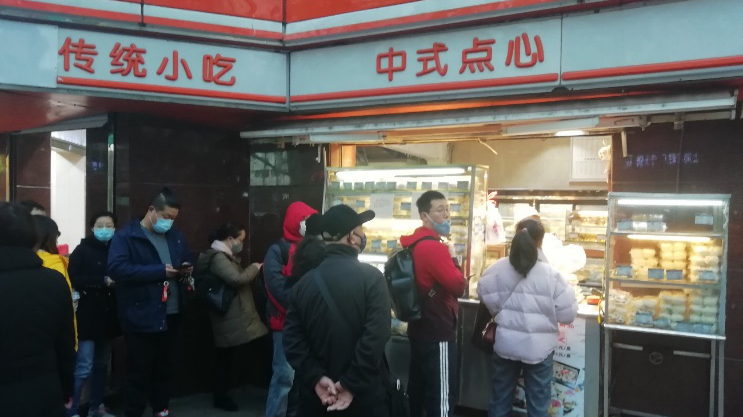 The baozi shop indicator says we're back to normal. Well, except for the masks. /John D. Van Fleet

The baozi shop indicator says we're back to normal. Well, except for the masks. /John D. Van Fleet

On a larger scale, schools are still closed, and large-scale events like concerts and sports events are also still suspended. But people are going out again. Here's a practice that's returning – in part because spring has come: 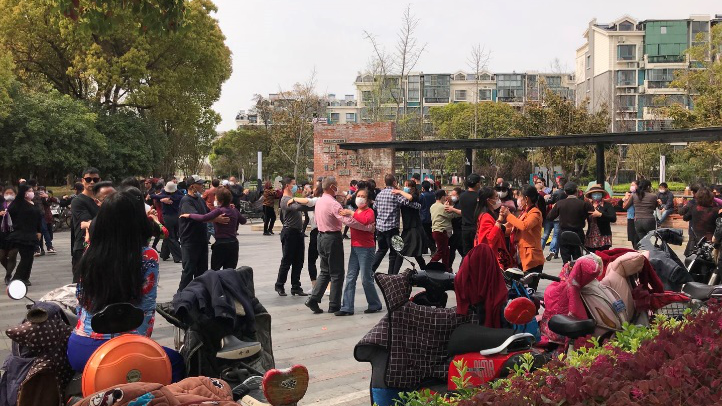 A western suburb of Shanghai last Sunday. /B Wang

A western suburb of Shanghai last Sunday. /B Wang

Public dancing in parks and such should be reasonably prudent, provided these folks aren't bumping into each other or swapping partners regularly! The Bund was also crowded last Sunday. 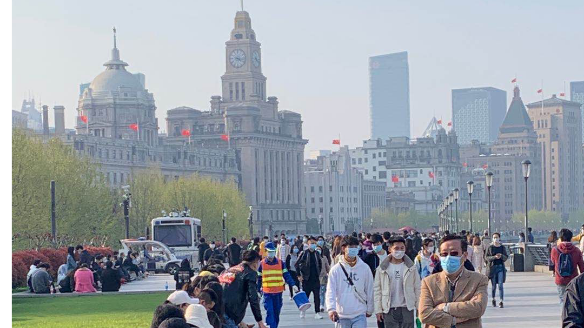 I guess if any fingers of blame are to be pointed in Shanghai these days, they should be aimed at these residents. What we see and hear instead is the fear of outsiders. In the past few days, the lockdowns in Wuhan and other Hubei Province cities have lifted, and there's a formidable amount of worried discussion on local social media about the risks that the hundreds of thousands who are leaving Hubei for various other parts of the country may be bringing with them.

I suspect that they are similar to the residents of the hotel across the street – among the safest folks in the country, as they've been in quarantine for two months, and many face an additional two weeks of quarantine at whatever destinations they have. Nonetheless, they're on the receiving end of some major-league finger-pointing.

Researchers will have to do a lot of work, over time, to answer questions as such as "how much enforced quarantining is optimal?" I'm guessing that we'll inevitably conclude that there's no one global answer – "horses for courses," as the eloquent British saying has it. But there's a Chinese joke bouncing around social media over here that's not only deliciously apt but also quite translatable, for humor.

I guess each society, even each city, must consider the balance between incremental degrees of safety versus economic damage and loss of rights. But one thing I hope all of us who are voting U.S. citizens will keep in mind is that finger-pointing is not merely an, er, pointless exercise, it's counter-productive.

I'm already seeing some media over there braying about "China should pay!" or "Cities are over/ undercounting!" I'm reminded of the – trite, but in this case with some merit – saying that when you point an index finger at someone else, three other curled fingers are pointed back at yourself.

South Korea's case should give us all finger-pointing pause. With a population 20 percent larger than California's but only a quarter of the landmass, it's far more densely populated. No one credible is accusing South Korea of under-reporting because they have long since adopted one of the best testings and tracing regimens on the planet. And they are vastly closer – geographically, culturally and economically – to China than California is.

All without draconian quarantine requirements a la Wuhan, or even what we're seeing in some U.S. cities now. The only finger-pointing we should be doing is at South Korea. While we're so pointing, we should be saying to our public health officials: "We want some of that!"

Our lives here in Shanghai are stable now, at least for the time being. You're in for another difficult few weeks over there. I hope for all our sake that your lives there will soon approach normal again.