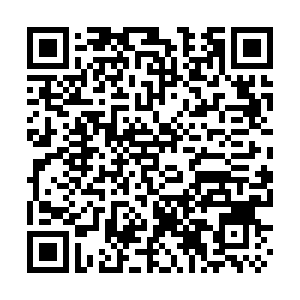 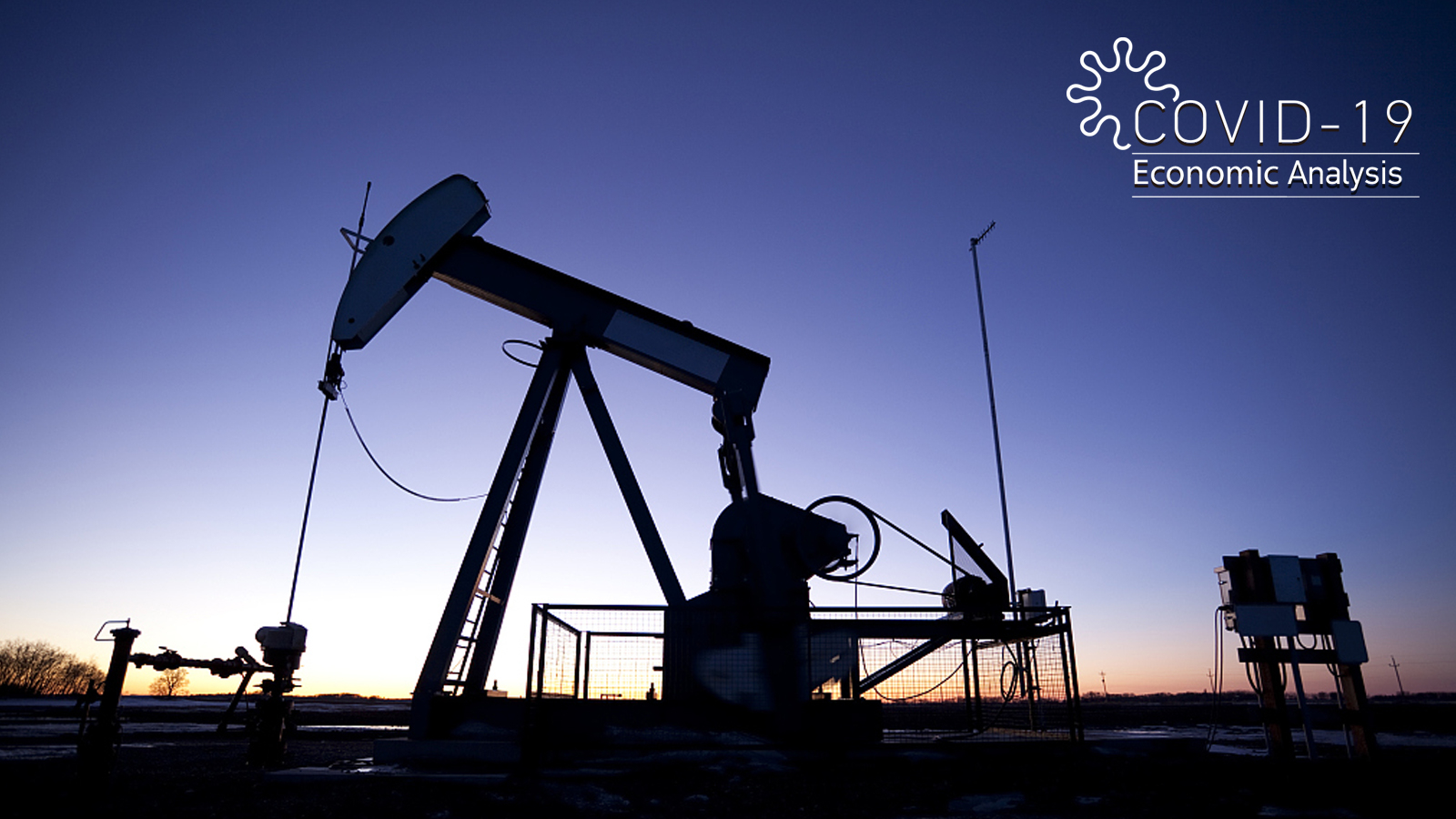 The negative U.S. oil futures were a preview of extreme situations and didn't reflect the real price, a global commodity expert said as the U.S. oil futures plunged below zero U.S. dollars a barrel on Monday for the first time in history. 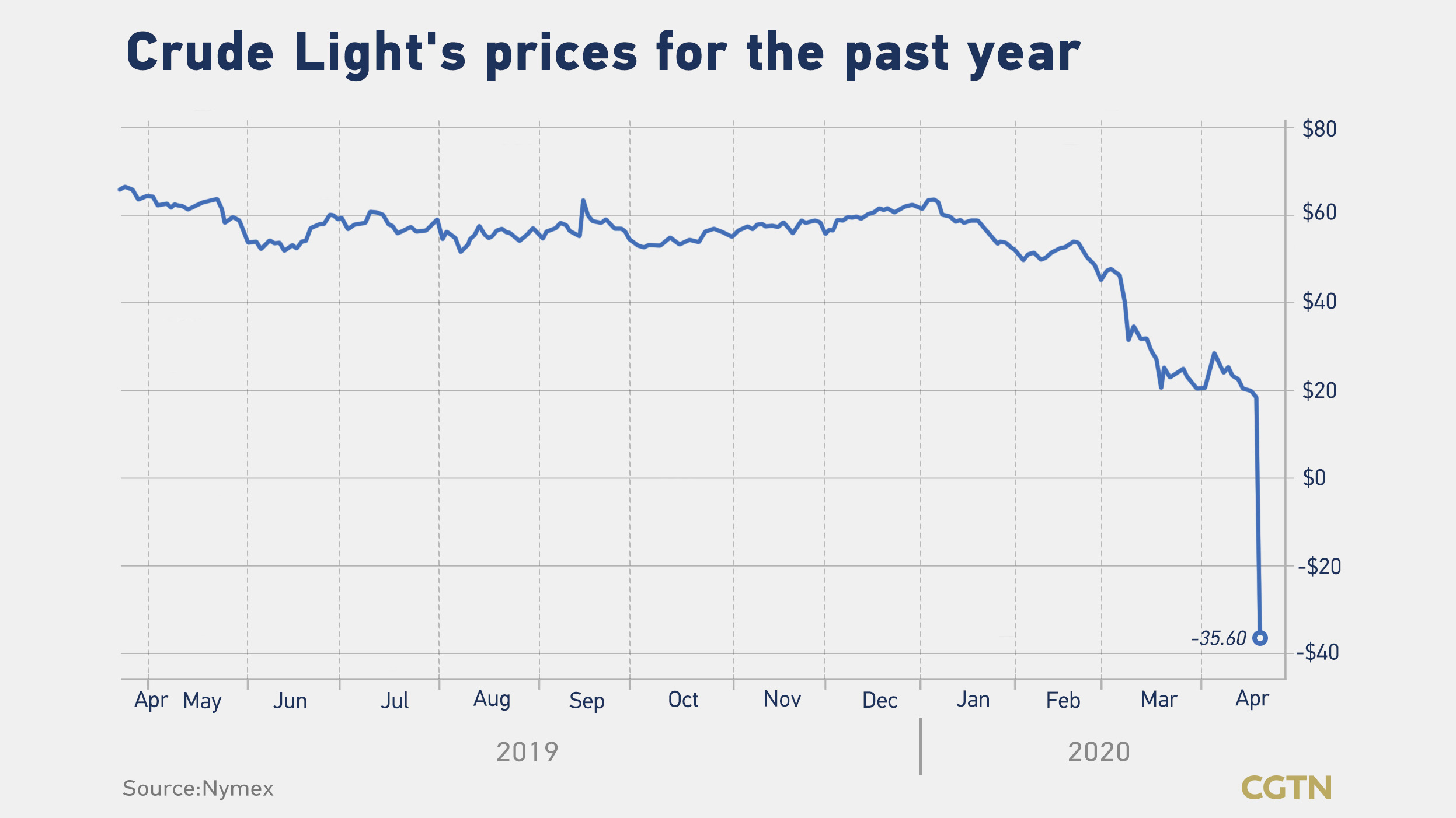 "Such an extreme case is attributed to the tight positions of the expiring contract and the amplification of programmatic trading," Li explained, adding that a collapse in oil demand from pandemic-driven lockdowns and storage facilities nearing their capacities also played a role.

The May contract were due to expire on Tuesday. "So buyers were eager to do reverse hedging transactions in order to stop losses as much as possible," Jimmy Zhu, the chief strategist at Singapore-based Fullerton Research told CGTN. Zhu also believed that technical things were the main reasons behind the negative oil futures.

Oil prices rebounded on Tuesday. The WTI crude for May delivery went up 38.73 U.S. dollars at 1.10 U.S. dollars a barrel by 0117 GMT. But gains were capped amid unresolved concerns over imbalance between supply and demand.

"The prices for June futures are still above 20 U.S. dollars a barrel, and this is the relatively real price," Li told CGTN.

This year, to date, the energy index has lost 45 percent, by far the worst performer among 11 sectors.

Financial crisis on the horizon?

Singapore-based Hin Leong Trading (Pte) Ltd, one of the largest fuel traders in Asia and an operator of a major tanker fleet, has admitted to 800 million U.S. dollars in undisclosed losses and filed for bankruptcy protection on Monday.

"I don't think there would be a banking crisis, as there have been no cases similar or related to Hin Leong till now," Li told CGTN, when asked whether fuel traders' bankruptcy will lead to a banking crisis or even a financial crisis.

"Oil companies are unlikely to go bankrupt one after another like 2008," Zhu agreed with Li. "Although the debt of oil players is relatively high, the chain reaction of default will be lower compared with banks and other financial institutions," he further explained.

"In the coming months, the global crude oil market will continue to ease, so the situation will improve when the June contract expires," Li told CGTN.

Where the June contract will go depends on the work resumption in Europe and America next month, Zhu said.

"As demand fell, we saw real pressure on oil storage. At least until next month, the oil price will continue to bear the stress," Zhu cited.

However, Liu Ying, Research Fellow of Chongyang Institute for Financial Studies at Renmin University of China disagrees, saying that the financial crisis is already taking place as the structural problems among U.S. stocks have not been resolved since 2008, and the epidemic is the last straw to break the camel's back.

"The liquidity crisis has emerged earlier, and the negative oil price brought about a debt crisis," Liu added. 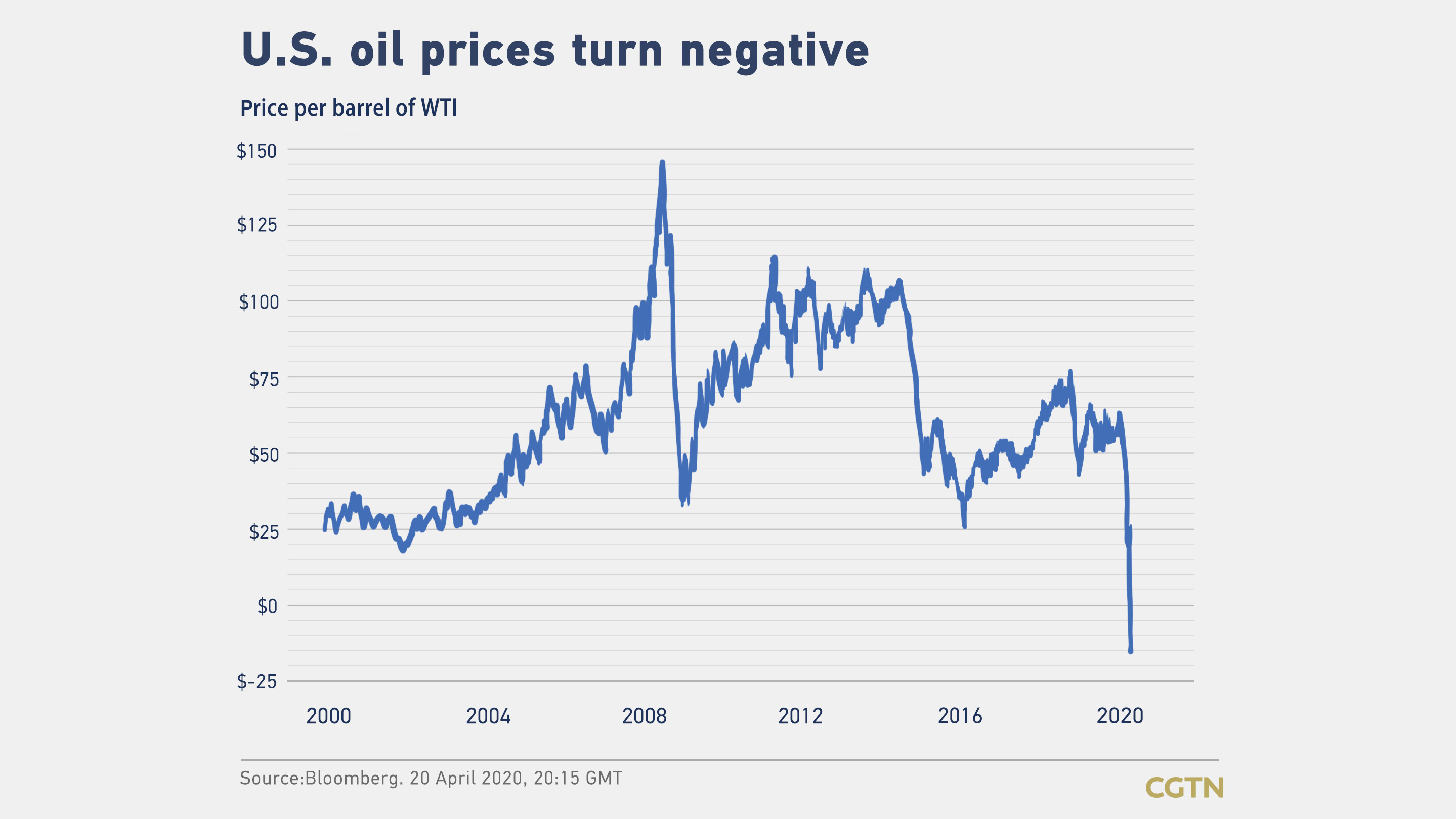 A collapse in oil demand

Monday's plunge is a troubling sign of an unprecedented global supply-demand imbalance in the first half of the year, as supply of crude oil has been far above demand since the coronavirus pandemic halted traveling and curbed economic activities.

"Efforts to curb the virus have made the industrial demand for oil drop to the lowest level in history," Zhu told CGTN. During the coronavirus outbreak, many factories are closed, with vehicles and airplanes standing still.

"The weak demand led to a weaker trading liquidity, finally resulting in a sharp decline in WTI prices and huge losses to hedgers," Zhu said.

A deal announced last week between OPEC and its peers would have slashed output by about 10 million barrels a day from May. However, both Li and Zhu believed that the record output cuts were still far from enough to balance the market.

The IEA forecasted that the loss of global oil demand in April and May will be 29 million barrels and 26 million barrels per day respectively. "Even if the reduction is implemented, it will only offset less than half of the loss in demand," Li said.

"Also, crude oil, which depends on pipeline transportation, is trading at a discount because it is nowhere to be placed and will often block the pipeline," Zhu told CGTN. 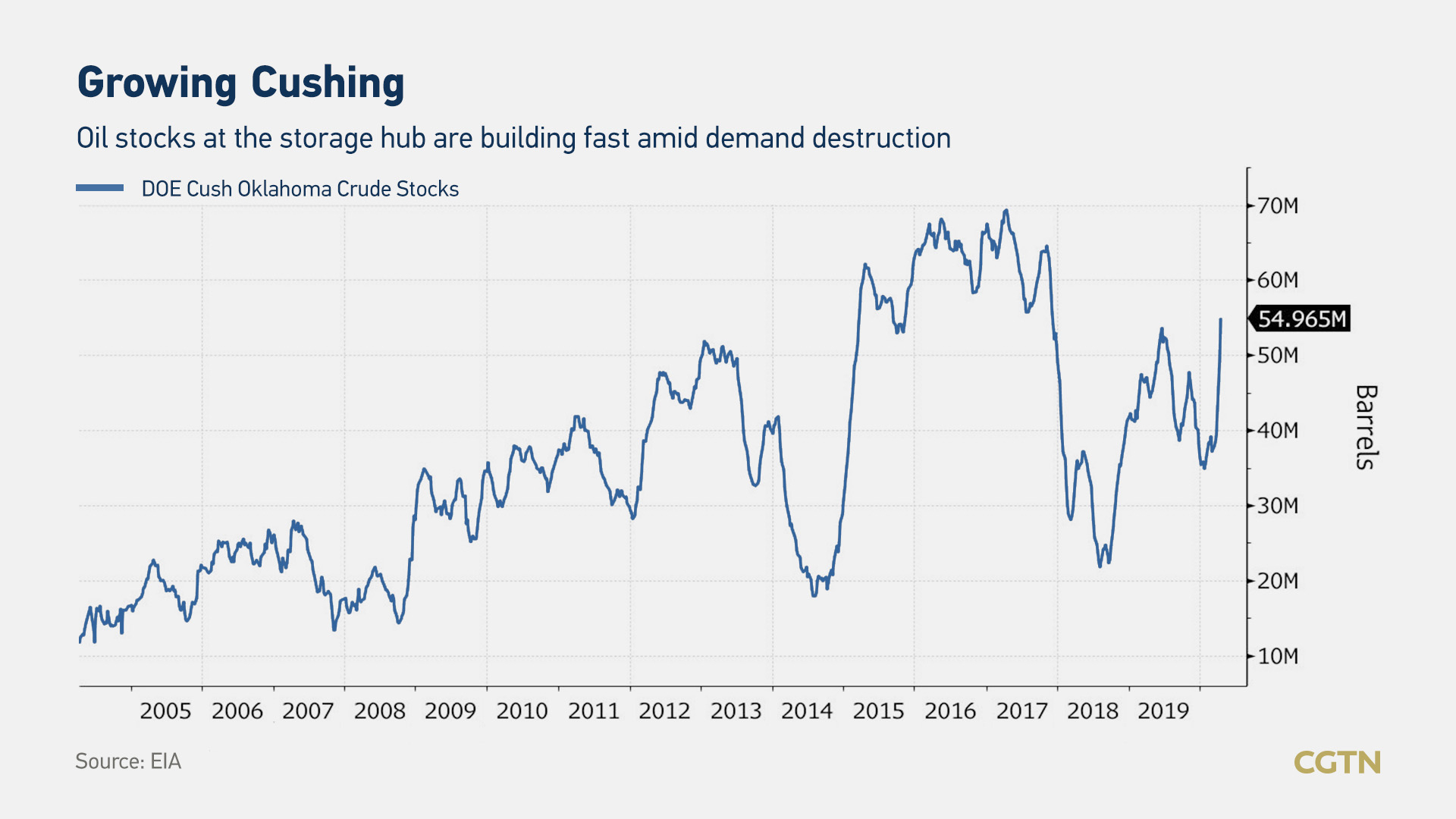 Crude stockpiles at Cushing in Oklahoma, which is the U.S. key storage hub and delivery point of the WTI contract, have jumped 48 percent to almost 55 million barrels since the end of February, according to Bloomberg.

U.S. crude inventories were expected to rise by about 16.1 million barrels in the week to April 17 after posting the biggest one-week build in history, according to Reuters. Analysts expected gasoline stocks to rise by 3.7 million barrels last week.

As oil storage facilities around the world are to be filled up, offshore oil storage has also increased significantly, where storage tanks will be full within 60 days, according to Morgan Stanley.

Concerned about the possible ripple effect from oil bankruptcies, the Trump Administration is proposing to pay oil drillers to keep their oil in the ground until prices recovered, so as to protect producers from immediate losses, according to Bloomberg.

"Oil reserves worldwide have been increased rapidly, and in areas where crude oil is difficult to transport due to traffic control, oil producers may soon be forced to pay for consumers, which actually undercut oil prices below zero," Zhu told CGTN.

Liu cautioned that the two pillars of oil and the U.S. dollar were severely damaged by the historical crash of U.S. crude oil prices.

She elaborated that the U.S. has just become the world's largest oil exporter before the WTI price turned negative, and the collapse brought huge reputation damage to the WTI international oil prices and petrodollar.

"As a major oil consumer and importer, the route China must take is to develop a Renminbi denominated oil futures market," said Liu.

She continued that in response to the novel coronavirus shock, the U.S. Fed has launched unlimited quantitative easing and unlimited currency swaps. Liu warned that even though the helicopter greenback is still favorable during the crisis, credibility of the dollar as a global currency has been severely damaged.