World Immunization Week: Vaccines, the most effective response to coronavirus
By Gao Yun 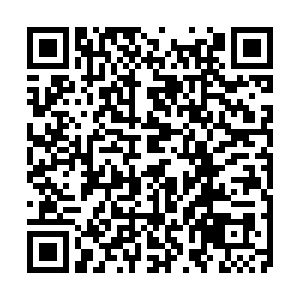 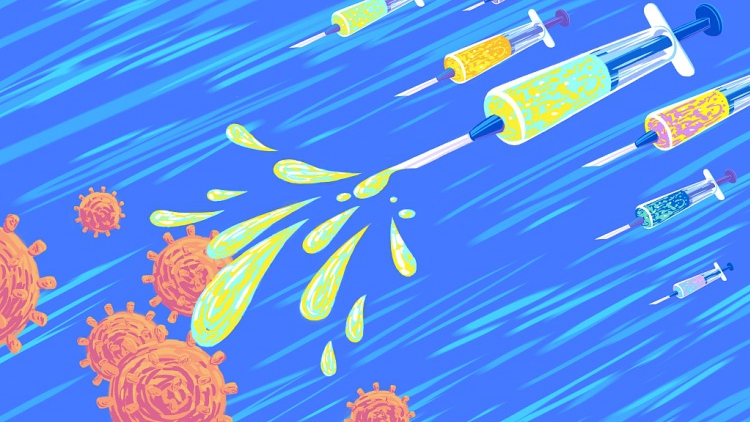 The novel coronavirus raging across the world has triggered global efforts in vaccine development. The actual way to halt the spread of COVID-19 is with a vaccine, while non-pharmaceutical interventions like social distancing and drugs can only help with containment.

"Ultimately, the development and delivery of a safe and effective vaccine will be needed to fully interrupt transmission," said TedrosAdhanom Ghebreyesus, director-general of the World Health Origination (WHO).

Richard Hatchett, CEO of the Coalition for Epidemic Preparedness Innovations, said, "Vaccines are our most powerful tool in fighting epidemic diseases."

The smallpox vaccine, the first vaccine to be developed successfully, was introduced by English physician Edward Jenner in 1796. Since then, infectious diseases including measles, polio, hepatitis B and others that once ravaged the world have been effectively controlled through vaccination.

Even being fast-tracked, none of the three phases of clinical trials can be omitted for the candidate vaccine, according to Wu Zunyou, chief epidemiologist at the Chinese Center for Disease Control and Prevention.

The safety testing in Phase I takes at least 20 days. The second phase is to test the effectiveness of the vaccine given to about 200 to 300 volunteers, which takes no less than a month. The third phase is a larger vaccination trial and assessment of side effects, taking at least three to five months.

Read more: Race against COVID-19, how fast can a vaccine be developed?

An Ebola vaccine program for example, was launched in late 2014 and proved effective in 2016, but it wasn't until November 2019 that the WHO first pre-qualified the Ebola vaccine made by Merck. In December 2019, it was approved for medical use in the United States.

WHO chief Tedros said in February that the first vaccines for the novel coronavirus could be available in 18 months, which would be an unprecedented speed if this is true.

The WHO has coordinated a group of experts with different backgrounds to work together for the development of vaccines against COVID-19.

The Declaration of experts with diverse backgrounds cooperating for the development of a vaccine for COVID-19. /WHO

The Declaration of experts with diverse backgrounds cooperating for the development of a vaccine for COVID-19. /WHO

As of April 23, six candidate vaccines have entered clinical evaluation with over 70 others in preclinical phases, according to the WHO.

Three China-developed vaccines have been approved for clinical trials, with two vaccines developed by the U.S. and one by the UK. 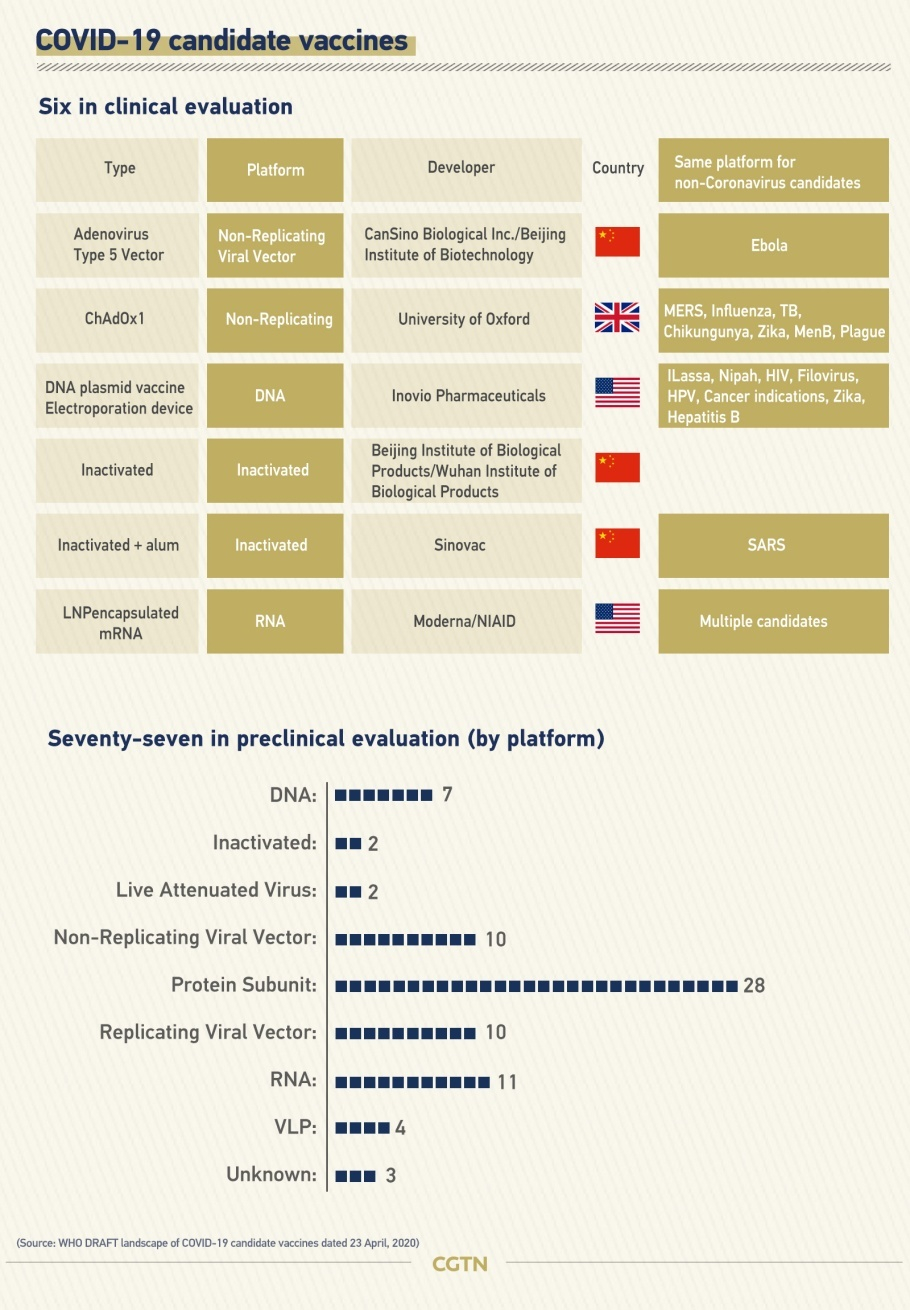 The WHO data also shows that teams around the world are racing against time to develop a vaccine with the most common type to be subunit vaccines.

Professor Chen Zhiwei from the Department of Microbiology, the University of Hong Kong sorted the main COVID-19 candidate vaccines into two categories.

One is the new vaccines that have not been approved before. This type refers to RNA and DNA vaccines, which introduce RNA or DNA fragments that encode antigenic proteins directly into human cells.

The other is traditional types of vaccines that have been already been widely used, including inactivated virus vaccines, subunit vaccines and viral vector vaccines. Most vaccines under development fall into this category.

China isolated and identified the virus strain soon after the outbreak in the country. It shared the genetic sequence of the novel coronavirus on January 12, which is "of great importance for other countries to use in developing specific diagnostic kits," said the WHO.

The Guardian also attributed global swift efforts in developing vaccines to China's contribution, saying "This unprecedented speed is thanks in large part to early Chinese efforts to sequence the genetic material of Sars-CoV-2, the virus that causes COVID-19."

Meanwhile, its scientists have published relevant researches and documents on international academic journals like The Lancet, for global peer exchanges, which have all played an indispensable role in promoting vaccine development worldwide.

Yet, vaccine development is restricted by objective conditions.

In general, clinical trials require enough patients and it is difficult to move forward without new subjects for clinical testing.

That's why the development of vaccine against severe acute respiratory syndrome (SARS) failed. The development entered the first phase of clinical trials in China when summer came and the virus disappeared. The lack of infected people could not support the follow-up clinical trials and became one of the reasons for the termination.

This is also the case with Middle East respiratory syndrome (MERS), the vaccine against which was shelved with the outbreak contained.

Also, two clinical trials of remdesivir were terminated in mid-April in China because the outbreak had been controlled in the country and no eligible patients were available to be enrolled, according to the ScienceNet.cn.

Read more: Graphics: How soon can we get a COVID-19 vaccine?