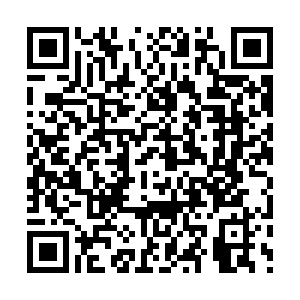 Editor's note: This is the 69th article in the COVID-19 Global Roundup series. Here is the previous one. 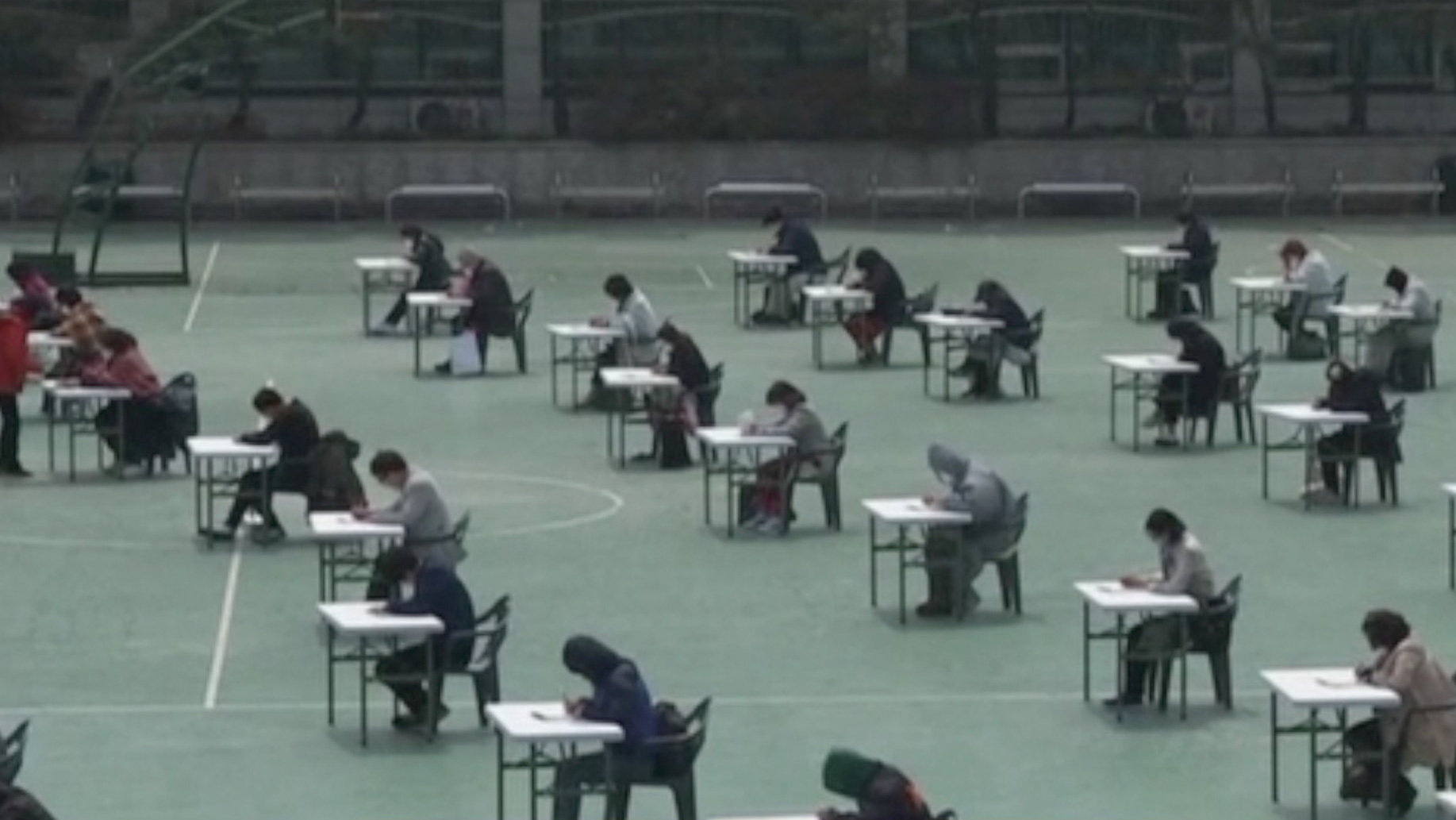 South Korea reported its biggest jump in coronavirus infections in seven weeks on Wednesday, driven by a new cluster at an e-commerce warehouse on Seoul's outskirts, as millions of more pupils went back to school.

Korea Centers for Disease Control & Prevention (KCDC) officials announced 40 new cases on Wednesday, which took its total to 11,265 – with most new infections from the densely populated Seoul metropolitan area.

It was the largest increase since 53 infections were announced on April 8.

The KCDC added that an outbreak at a warehouse of e-commerce form Coupang in Bucheon, west of Seoul, has seen 36 cases so far.

The country has been held up as a global model in how to curb the virus and has rushed to contain new infections as life returns to normal. South Korea endured one of the worst early outbreaks with several cluster infection cases, and it appears to have brought its outbreak under control thanks to an extensive "trace, test and treat" program.

More than two million students returned to classes on Wednesday, as part of the phased reopening of schools. Some high schools were forced to turn back pupils shortly after resuming classes last week over concerns of new virus cases in their neighborhood.

"It is suspected that the basic regulations were not enforced at the warehouse," said vice health minister Kim Gang-lip. "If quarantine rules are not implemented at workplaces, it could lead to a dreadful result of mass infection."

Social distancing rules have been relaxed in South Korea, and facilities such as museums and churches have reopened. At the same time, some professional sports – including baseball and soccer – started new seasons earlier this month, albeit behind closed doors. 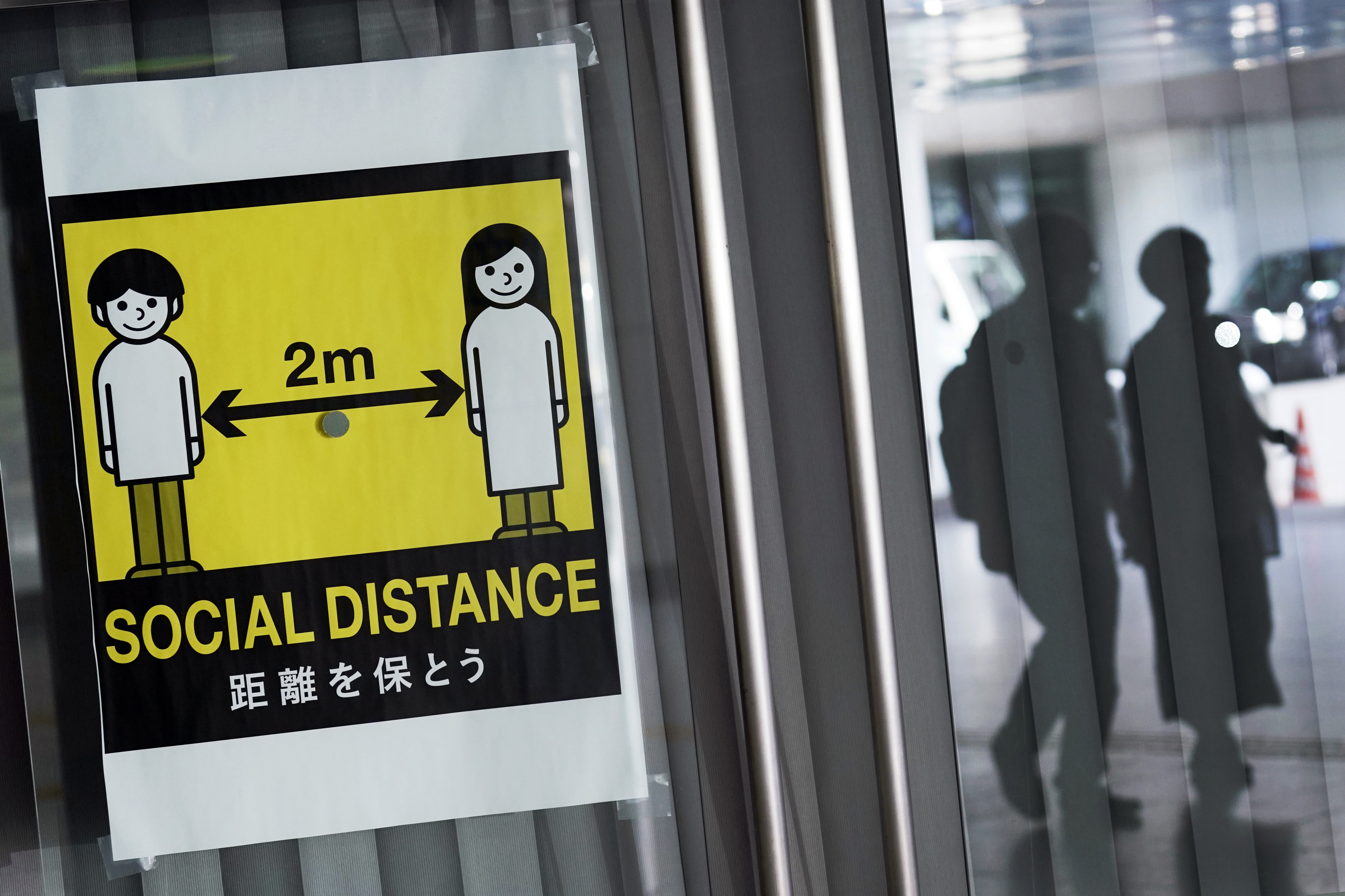 An official banner of social distance awareness is attached on a window where a man and a woman are reflected, in Tokyo, Japan, May 27, 2020. /AP

An official banner of social distance awareness is attached on a window where a man and a woman are reflected, in Tokyo, Japan, May 27, 2020. /AP

Meanwhile, a company is helping sports fans in Japan "return" to the stadium cautiously, with an app that allows fans to cheer remotely for their teams playing in empty stadiums.

Japan's Nippon Professional Baseball league is scheduled to resume on July 19, with J.League soccer expected to start a couple of weeks later. Still, no fans will be allowed into stadiums amid fears of new coronavirus infections.

The Remote Cheerer system lets fans watching matches on television in their living rooms cheer, or boo, the players on the pitch via their smartphones, sending either a pre-recorded shout-out or their own personal message.

The voices they send will reverberate around the stadium in real-time, transmitted by giant loudspeakers.

Yamaha Corporation, which has developed the app, recently tested the system at the 50,000 capacity Shizuoka Stadium ECOPA, which is mainly used for soccer, with two J.League clubs, Jubilo Iwata and Shimizu S-Pulse, taking part in the trial.

Fans watching on television were able to send their support through 58 speakers around the ground. Viewers can decide which speaker will broadcast their cheer.

"At one point during the system field test, I closed my eyes, and it felt like the cheering fans were right there in the stadium with me," said Keisuke Matsubayashi, an official with the stadium company.

"This system had the potential to cheer players on even in a stadium of this size." 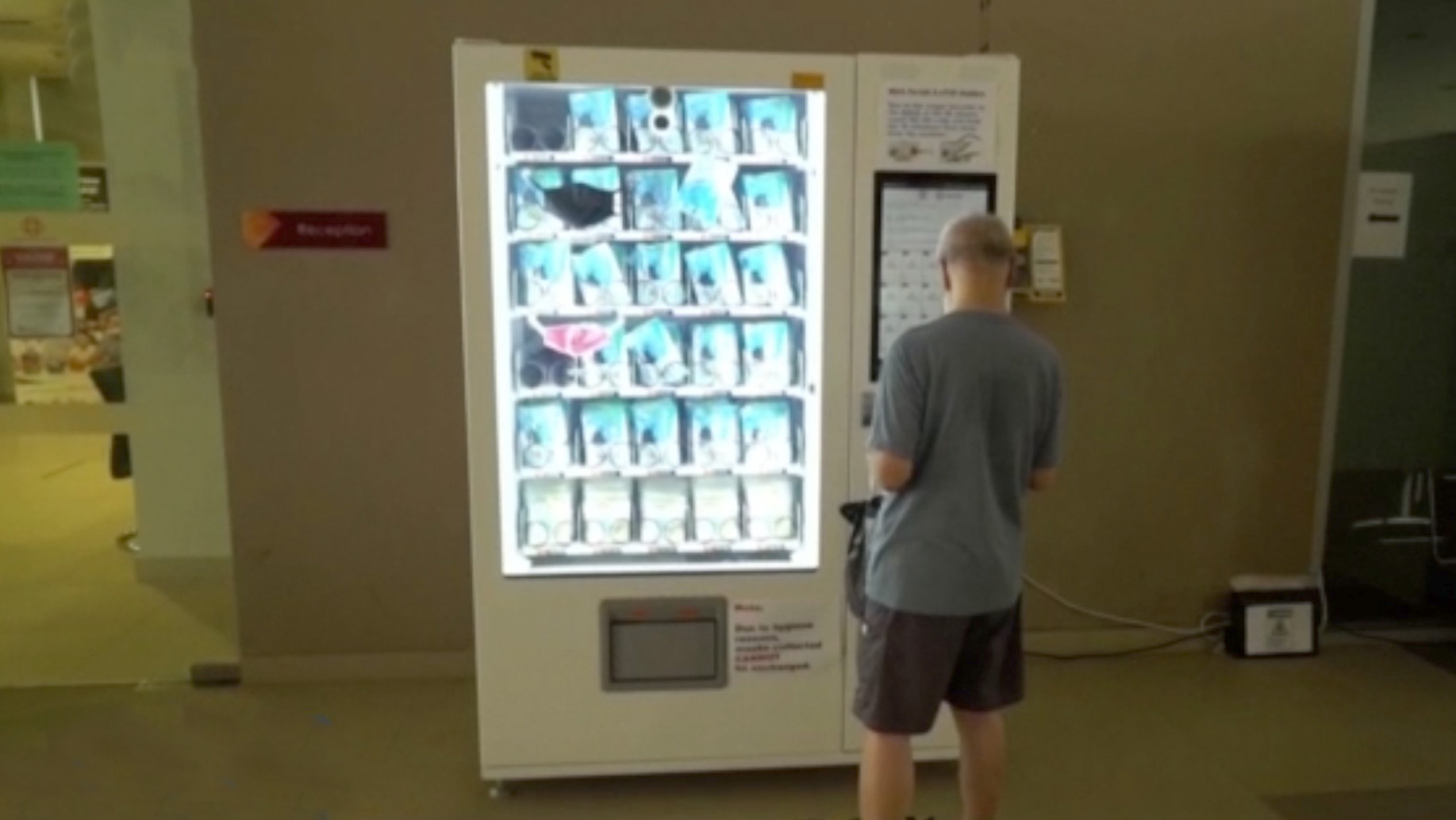 However, in early April, the country had only about 1,000 cases considered by the rest of the world as a success in containing the virus by harsh lockdown measures.

Now, it has more than 30,000 cases in the city state, most of which are migrant workers from South and Southeast Asian countries like Bangladesh and India, who were infected in crowded dormitories.

According to Minister of Manpower Josephine Teo, about 200,000 migrant workers in Singapore are packed in 43 over-crowded dormitories. The living condition makes it impossible for them to adopt effective social distancing rules.

The government's COVID-19 containment plan largely neglected this community before cluster infections started to break out in these dorms by 1,000 cases per day in April.

For recent weeks, the daily new cases have fallen to below 1,000, a small sign of progress since the peak of the clusters, hover between 500 to 900 a day.

"For the migrant worker situation, I anticipate it will take another three to four weeks to reduce significantly," Professor Teo Yik Yang, dean of the National University of Singapore's School of Public Health, told CNN. 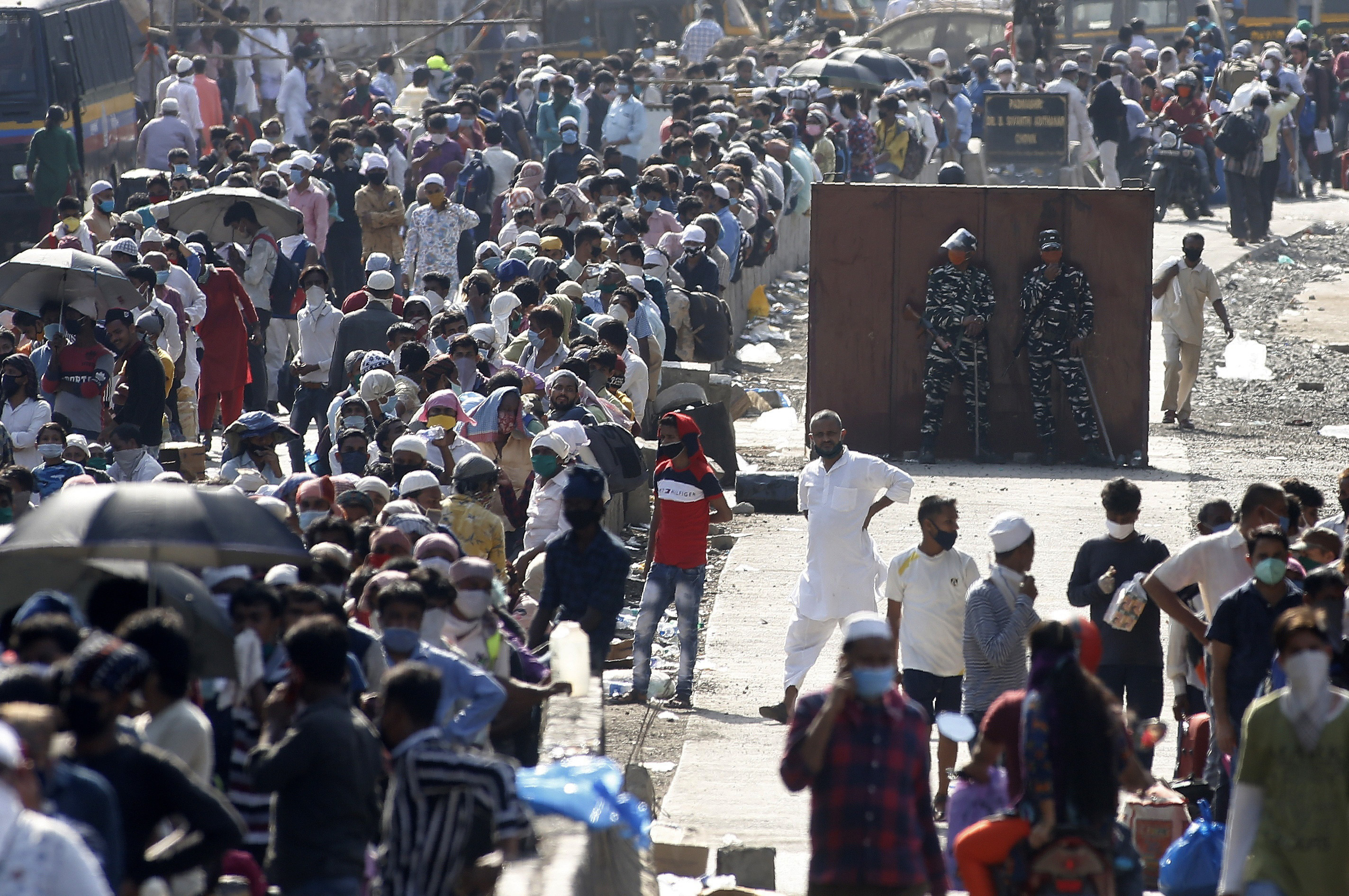 Migrant workers gather for transport to the railway station for their onward journey to their home states, at Dharavi slum in Mumbai, India, May 26, 2020. /AP

Migrant workers gather for transport to the railway station for their onward journey to their home states, at Dharavi slum in Mumbai, India, May 26, 2020. /AP

India's federal health ministry Wednesday morning said that the total number of coronavirus cases surpassed the 150,000-mark, reaching 151,767, while the latest death toll stood at 4,337, as the country seeing a severe heatwave over the week.

As many as 170 new deaths and 6,387 fresh infections were reported during the past 24 hours, it showed the ministry's data. So far, 64,426 people have been discharged from hospitals after showing improvement.

"As at 8:00 a.m. Wednesday, 4,337 deaths related to novel coronavirus have been recorded in the country," reads information released by the ministry.

"The number of active cases in the country right now is 83,004," reads the information.

Wednesday marks the 64th straight day of an ongoing lockdown across the country, which was announced on March 25 and extended for the third time on May 17 till May 31.

Meanwhile, the country's capital, Delhi, saw temperatures rise to 47.6 degrees Celsius on Tuesday and is likely to last until the weekend. Officials have warned people to stay indoors as far as possible.

"Super cyclone Amphan sucked out all the moisture from other parts of the country," Kuldeep Shrivastava, the head of the regional weather forecasting center, told the Hindustan Times newspaper.

The temperatures are the highest that the country has seen in decades for this time of the year. According to the global weather tracking website El Dorado, India was the hottest region in the world on Tuesday.