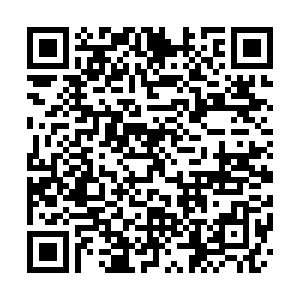 U.S. President Donald Trump on Thursday tweeted a copy of a letter that referred to the peaceful protesters who were dispersed from a park near the White House on Monday as "terrorists."

The letter was reportedly penned by former Trump lawyer John Dowd to former Defense Secretary Jim Mattis. In the letter, the writer denounced Mattis for criticizing the president's approach to protesters in front of the White House. 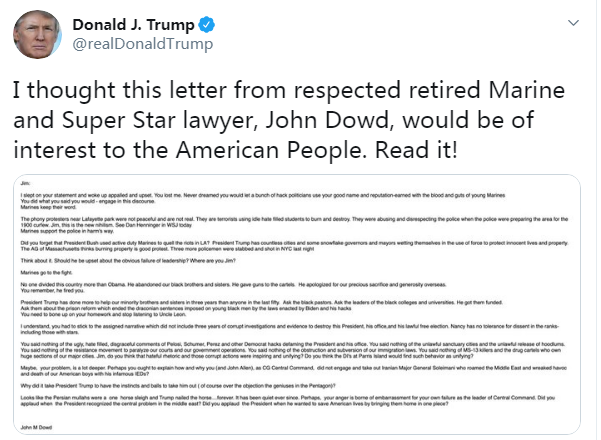 On Wednesday, Mattis issued a stinging condemnation of Trump, accusing the president of trying to "divide" America.

The retired four-star Marine general made the remarks as Trump was widely criticized for a visit on Monday to St. John's Episcopal Church.

Tear gas and flash grenades were used to clear what appeared to be peaceful protesters in Lafayette Park across the street from the White House and near St. John's Church.

"The phony protesters near Lafayette were not peaceful and are not real," read the letter, without giving any evidence.

"They are terrorists using idle hate filled students to burn and destroy. They were abusing and disrespecting the police when the police were preparing the area for the 1900 curfew," the letter further claimed.

Trump shared this letter on his Twitter, saying "I thought this letter from respected retired Marine and Super Star lawyer, John Dowd, would be of interest to the American People. Read it!"

Earlier on Wednesday, Trump also tweeted to criticize Mattis, calling him the world's "most overrated general" and swiped at his leadership capabilities, claiming that Mattis' strength was not his military prowess "but rather personal public relations."

(Cover image is a screenshot from video)