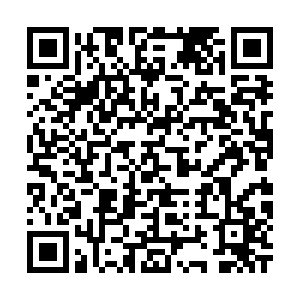 Experts who are dedicated to investment banking, securities analysis and IPO legal procedures said the recent "homecoming" cases are just the beginning of the story, adding that the trend will last for a couple of years due to continuous financial reform in China and external factors. 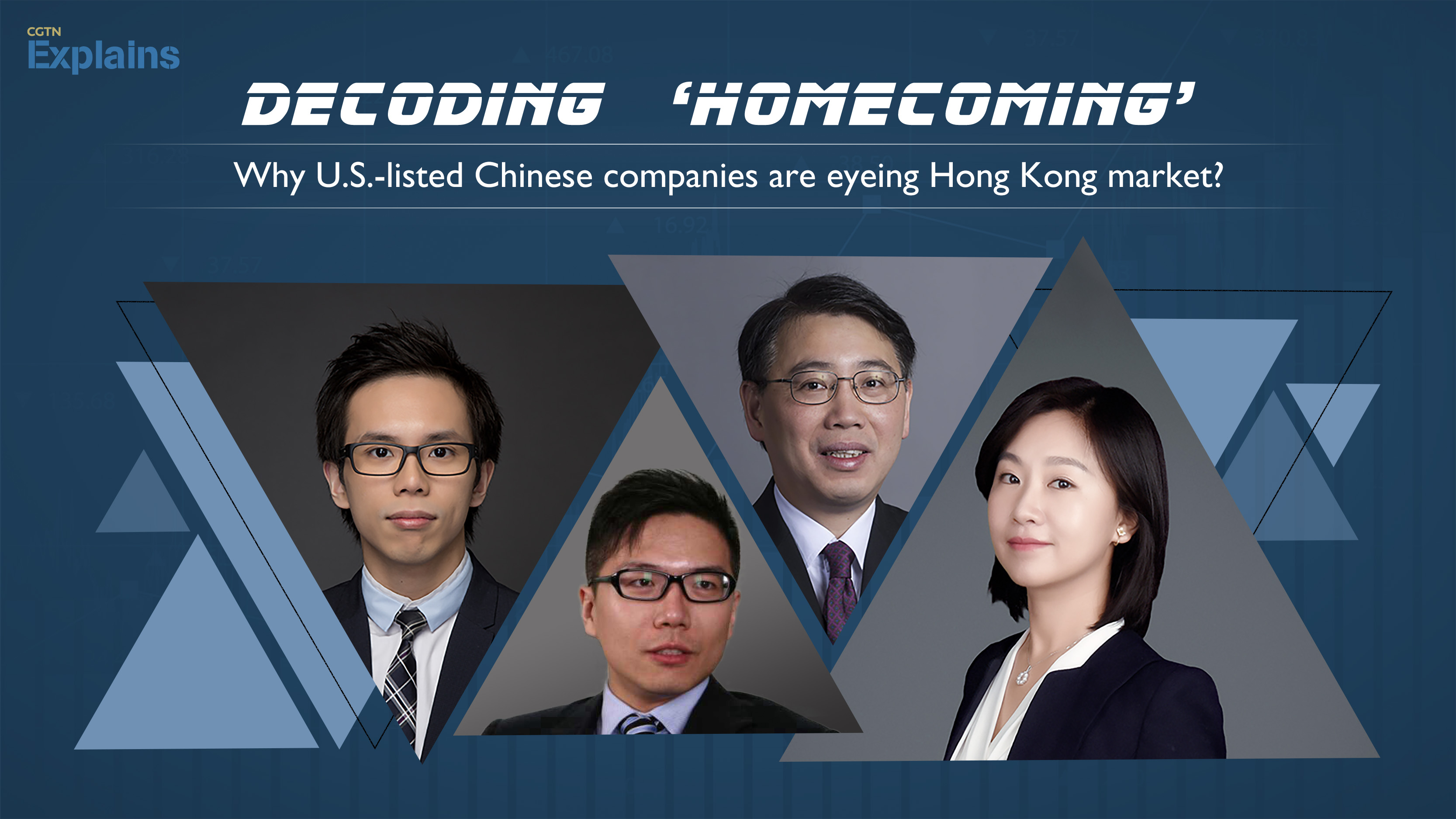 What's behind the trend?

"I think it is affected by the global politics and economy environment. As we know, there are lots of uncertainties between China and the U.S. in the aspects of politics, economy, and of course the capital markets in recent years," Ren Guanlei, executive director of investment banking department at China International Capital Corporation (CICC), told CGTN, adding "therefore, it is safer for the U.S.-listed companies to get listed in Hong Kong market, minimizing the instability and the risks for them."

Lawrence Wang, partner of law firm Fangda Partners, attributed the trend to the U.S. tightening scrutiny on listed companies and emerging advantages from market optimization back in China.

"Apart from the tightening regulation in the U.S., which is just one of the immediate triggers, there is the whole other series of factors, at a more intrinsic level. These factors mainly include proximity of business market and customer base, better cultural recognition, wider spread of shareholder base, as well as the rapidly enhancing synergy as a result of the increasingly integrated stock markets in the Greater China Region," Wang said.

Hong Kong as a financial center is traditionally under the spotlight of the world's financial stage. As its stock exchange has been easing various rules to embrace high-tech companies and secondary listings, the city remains in the top three IPO market globally.

"The reform of secondary listing in 2018, along with the weighted voting rights regime, were aimed to attract China's high growth technology companies to come back to list in Hong Kong," Wang said, adding other endogenous contributors such as geographical and cultural proximity. "Hong Kong had traditionally been seen as the venue of choice for China-based companies because it is more cost-efficient and culturally compatible to these companies."

Additionally, "Alibaba's return to Hong Kong last year really cast a vote of confidence to Hong Kong as one of the paramount international financial centers, and it proved Hong Kong's secondary listing reform a success," he said. 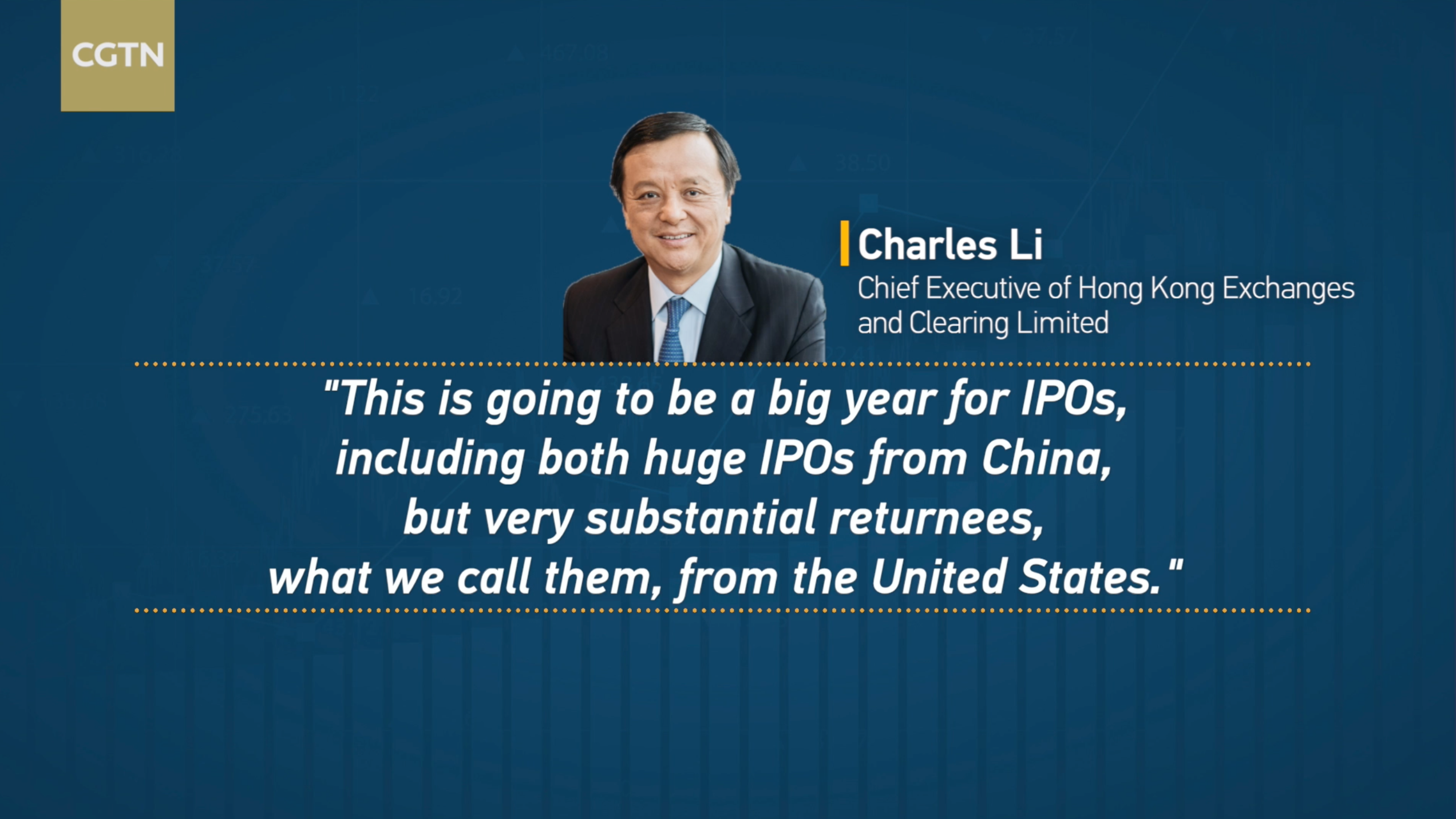 Moreover, Wang stressed, while comparing other options like London or continental Europe, that "Hong Kong market has a deeper and more diverse pool of investing capital, more liquidity, as well as the better understanding and therefore a higher valuation of Chinese companies."

"The recent high-profile home returning cases are just the beginning of the story," Tom Chau, partner and head of Beijing office at British law firm Herbert Smith Freehills told CGTN. "As of June 2020, about 42 Chinese firms which are now listed in the U.S. are eligible for a secondary listing in Hong Kong. These account for approximately 46 percent of the total capitalization of U.S.-traded Chinese firms."

Over a-year-long social unrest in Hong Kong has hit its business environment, casting shadows on the confidence of some investors.

However, in the view of Jason Chan CFA and head of research at Hong Kong-based uSMART Securities, that will only have "a limited negative impact on the homecoming companies or the returning trend," citing the city still maintains its leading position as a global international financial center with its core competitive advantages including free flow of capital, high stability of the pegged exchange rate system and reliable regulatory system. "I believe the trend will last for 1-2 years."

Chan said "we can see that on those new economy, stocks remain a very high turnover volume," illustrating the technology tycoons such as Tencent and Meituan-Dianping even recorded their one-year high and all-time high, respectively, in the recent trading days.

Moreover, IPOs of Alibaba and NetEase in Hong Kong were also oversold by 40 and 360 times, respectively, reflecting investors' confidence in these high-growth and technology-based companies. 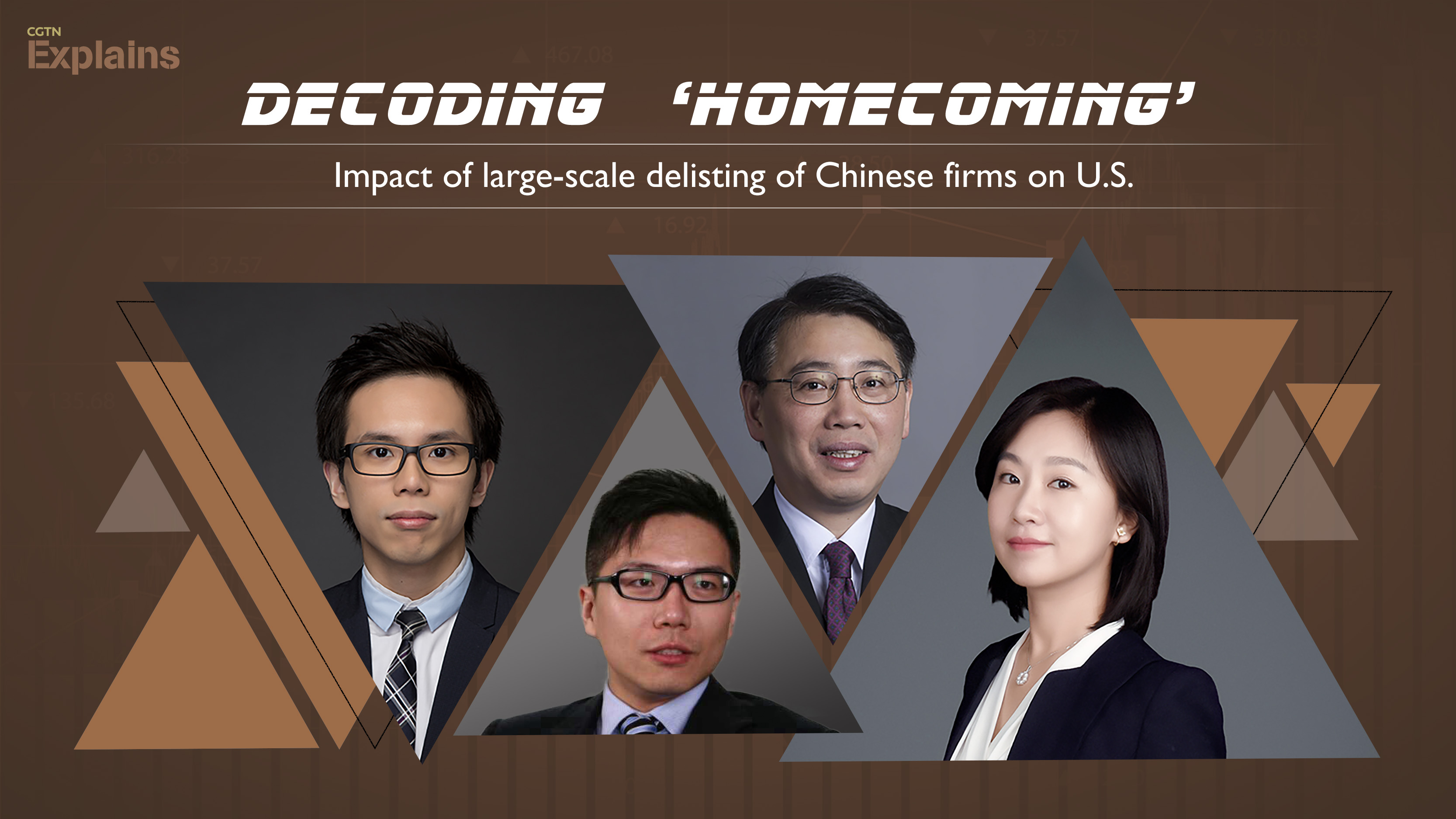 In April, the scandal of multi-million-dollar accounting fraud of China's coffee brand Luckin Coffee, to some extent, triggered a "crisis of trust" in Chinese firms listed in the United States. After that, the U.S. Securities and Exchange Commission publicly warned of the risk involved in the U.S.-listed Chinese companies, which is rare.

"It has no doubt that the case would significantly hinder or hurt the U.S. investors' confidence in the listing of Chinese firms, the venture capitals or the private equity companies will be more cautious and probably set a higher hurdle rates when investing in those immature or fast growing private Chinese companies," Chan said.

However, Chau thinks Luckin Coffee is an individual and isolated case and it has been, to certain extent, overstated. "I don't think we should treat Luckin Coffee as a common feature of all PRC [People's Republic of China] companies ... the issue is not unique to the listed companies in all advanced and mature capital market. The key issue is the quality and integrity of the listed company."

"One point which is interesting and worth consideration is that the U.S. stock market is mature and the key players are professional and sophisticated investors. The professional investment houses will do in-depth analysis before making the investment decision. To state the obvious, the macro picture is that the Global investors still recognize (Chinese) firms for their strong fundamentals and business prospects. Investors are more than likely to stick with the case-by-case mindset when considering the value of Chinese firms," he said.

Being relatively optimistic about learning a lesson from Luckin Coffee's scandal, Wang cited many mitigating actions and positive signs, for example, China Securities Regulatory Commission (CSRC) publicly and solemnly criticized Luckin Coffee for its fraudulent disclosure and pledged to push forward the cross-border enforcement cooperation among securities regulators as appropriate and necessary.

In May, the U.S. Senate passed a bill that would require overseas firms to follow U.S. standards for audits and other financial regulations. Some presumed that the move targets Chinese firms. If the bill is signed into law, it could threaten the listings of nearly 250 Chinese mainland-and Hong Kong-based companies whose shares are traded in the U.S. and whose auditors are under China's jurisdiction, but it would also have negative impact on the U.S.

"Extensive delisting would cause listed companies from all other countries to double check the idea of listing in the U.S., including the high-quality companies which the U.S. would not want to lose," Chau said.

He continued that "many Chinese companies listed in the U.S. markets are leading private-sector players from across many sectors in China and even globally. The U.S. investors have benefited both from the share price appreciation and profit-sharing in the past. Delisting them would risk throwing away the baby together with the bath water for the U.S. investors."

Moreover, he cautioned that in the medium term, this would severely hurt the U.S. financial services industry due to loss of business.

Ren shared Chau's views, saying "China is the second largest economy in the world. If U.S. market has lost Chinese listed companies, it is no doubt that the delisting will harm the integrity of its capital market and its valuation system."