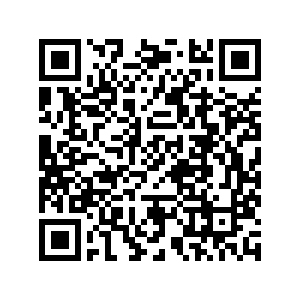 The annual Han Kuang military exercises in southeast China's Taiwan, which the island's Democratic Progressive Party (DPP) authorities claim to test the island's defenses against an attack from the mainland, kicked off on Monday and will last five days.

This year's exercises are taking place amid increasing tensions between China and the United States, which continues to use arms sales in an attempt to play Taiwan against the mainland.

U.S. arms sales to Taiwan have a long history. From 1949 to 1979, the North American country provided 4.22 billion U.S. dollars in military aid as well as 1.76 billion in economic support.

And military relations didn't stop after the establishment of diplomatic relations between China and the U.S. in 1979: In fact, sales of weaponry have accelerated. 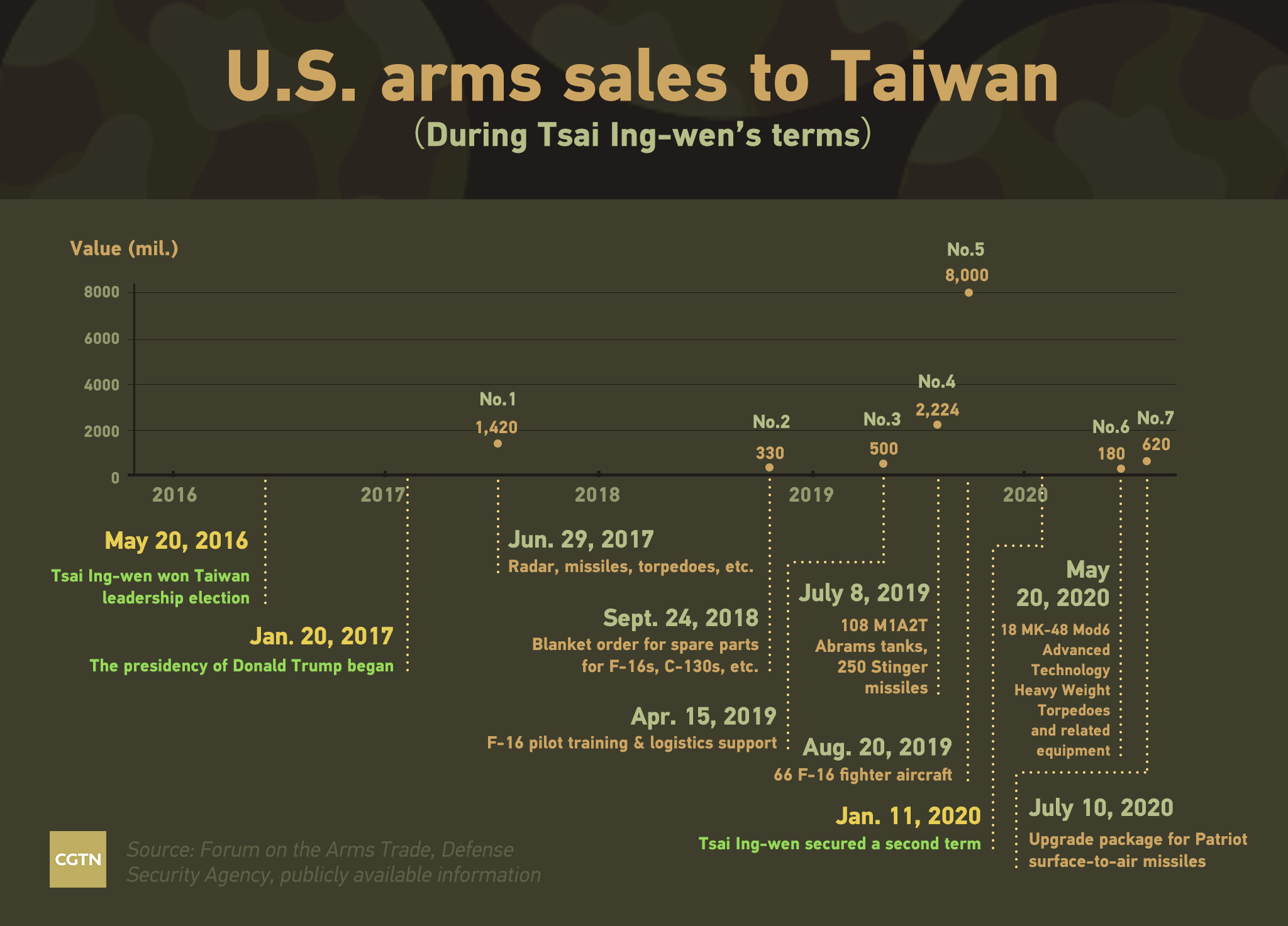 According to the Stockholm International Peace Research Institute (SIPRI) Arms Transfers Database, from 1979 to 2018, 77 percent of arms imported by Taiwan were of U.S. origin.

The Obama administration (2009-2017) notified Congress of more than 14 billion U.S. dollars in Foreign Military Sales (FMS) to Taiwan and licensed another 6.2 billion in Direct Commercial Sales, according to the Congressional Research Service.

Donald Trump's administration began selling weapons to Taiwan just five months after his election victory. As of July 10 this year, it had notified Congress of more than 13.2 billion U.S. dollars in potential FMS purchases by Taiwan over seven deals, the largest being an eight-billion-U.S.-dollar agreement for 66 F-16 warplanes struck in August 2019.

The U.S. has approved arms sales to Taiwan twice this year, the latest involving the recertification of air defense missiles in a deal worth 620 million U.S. dollars.

The DPP has thanked the U.S. for its commitment to the so-called Taiwan Relations Act and "Six Assurances" as well as for strengthening the island's military.

But the true purpose of Washington's arms sales has little connection to defending the island or its residents.

Zhang Qingmin, professor at the Center for International & Strategic Studies in the School of International Studies at Peking University, said in his article that the arms sales both reflect that the U.S. treats Taiwan as an independent political entity and facilitate U.S. military relations with the Taiwan authorities so as to interfere in China's internal affairs.

Professor Yang Chengjun, a nuclear strategy expert, argued to Global Times that the arms sales are symbolic: They help build up Taiwan's confidence and military capacity, but have limited practical purpose.

Most military observers believe that given the growth in the Chinese mainland's military power, Taiwan's purchase of military equipment from the U.S. would have little significance in a conflict.

Wei Dongxu, a Beijing-based military expert, said in a commentary of Global Times that the Taiwan military's outdated submarines would likely be destroyed before they could launch the U.S.-made torpedoes they carry.

If the weapon sales are not designed to defend Taiwan, what is their purpose? For many observers, they appear to be solely designed to undermine the one-China principle.

"In fact, that's Taiwan's only real purpose vis-a-vis American foreign policy, which is to be exploited by the U.S. as political leverage against the Chinese mainland from time to time," said Andrew Korybko, a Moscow-based American political analyst.

Korybko is not alone in holding such a view. Su Meixiang, associate research fellow at Taiwan Institute of Fujian Academy of Social Sciences, told CGTN that the U.S. is using Taiwan as a "tool" to promote its "Indo-Pacific strategy" with the aim of "constraining China with Taiwan.”

China has warned on various occasions that the Taiwan card played by the U.S. is dangerous and doomed to fail, noting that the arms sales violate international law, international relations norms, the one-China principle and three China-U.S. Joint Communiques.

Countermeasures have been taken. Following a 2.22-billion-U.S.-dollar deal last year, China announced that for the first time it would cut ties with U.S. firms involved in arms sales to Taiwan. 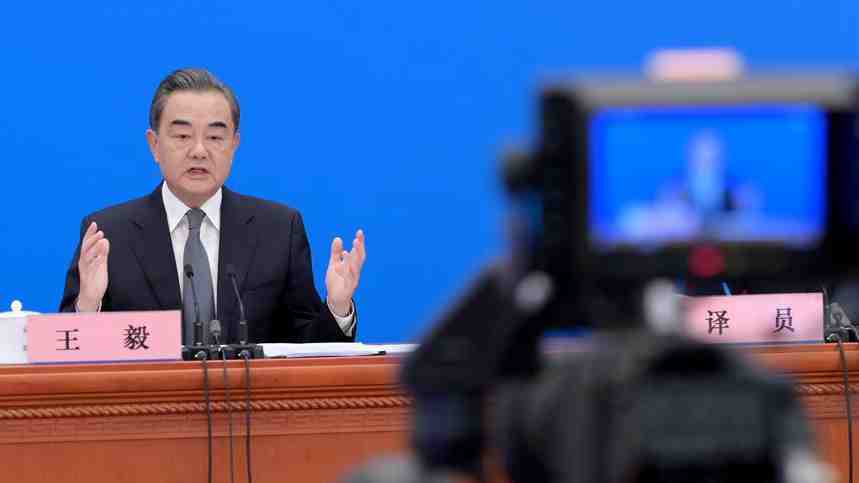 Chinese State Councilor and Foreign Minister Wang Yi said that reunification of the two sides of the Taiwan Straits is the trend of history and no individual or force can stop it from happening at a press conference on China's foreign policy via video link on the sidelines of the third session of the 13th National People's Congress at the Great Hall of the People in Beijing, China, May 24, 2020. /Xinhua

Chinese State Councilor and Foreign Minister Wang Yi said that reunification of the two sides of the Taiwan Straits is the trend of history and no individual or force can stop it from happening at a press conference on China's foreign policy via video link on the sidelines of the third session of the 13th National People's Congress at the Great Hall of the People in Beijing, China, May 24, 2020. /Xinhua

"The DPP is foolishly paying more and more protection fees to the U.S. as an act of compliance," Senior Colonel Cao Yanzhong, an Academy of Military Sciences researcher, told China Daily. "The money can be better spent elsewhere, like improving the economy and the livelihood of Taiwan compatriots."

There has also been opposition from within Taiwan, with residents expressing concern that Taipei is wasting money on maritime equipment upgrades.

Some have criticized the military purchases online, saying paying billions of dollars for weapons was not a good use of Taiwan taxpayers' hard-earned money. Others warned "the United States is here to blackmail and waste people's tax money."

Arms sales to Taiwan have also drawn opposition from the U.S public. The Chicago Council on Global Affairs found in the 2019 Chicago Council Survey of American Public Opinion that most Americans oppose U.S. policies on Taiwan.

Asked whether they supported or opposed selling arms to Taiwan, only 34 percent of Americans backed such sales. Majorities from both political parties opposed, with Republicans more likely to support arms sales by a margin of about 10 percentage points.

Overseas experts and scholars have also criticized the continuing U.S. arms sales to Taiwan, saying the practice undermines China's sovereignty, and exerts a negative impact on peace and stability in the Taiwan Straits and the wider Asia-Pacific region.