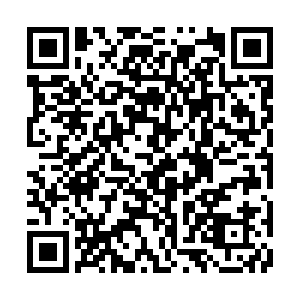 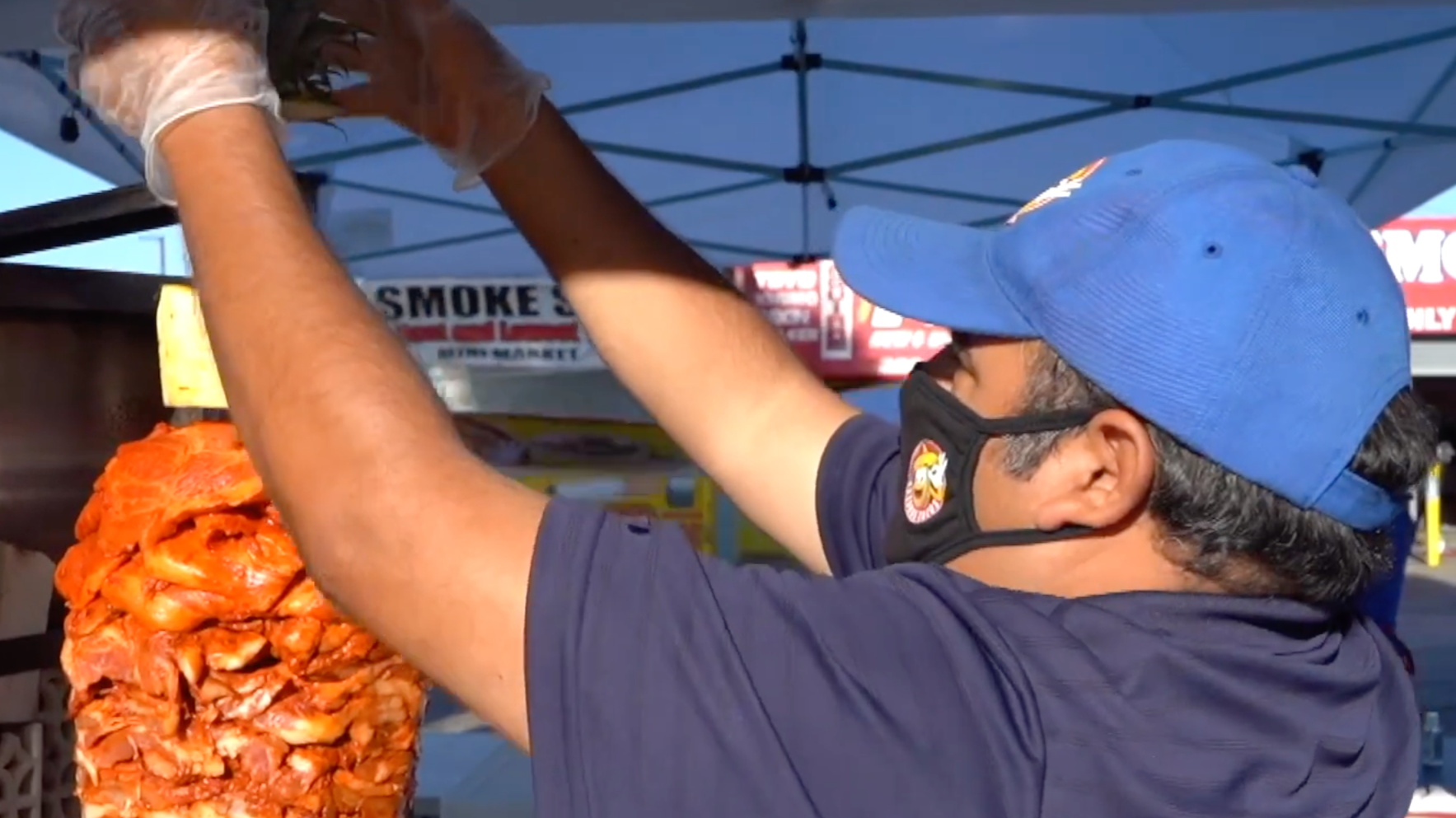 Editor's note: The coronavirus pandemic has infected 13.5 million people and claimed half a million lives. It's still gaining momentum in many parts of the world. It attacks all – the rich, the middling sort, the pauper – but it's not an equal-opportunity killer. The virus is also changing the conditions of underprivileged people from bad to worse, causing many to join the ranks of the vulnerable worldwide.

In this grim situation, CGTN has launched the series "In the era of pandemic, every life counts." The fourth story focuses on independent contractors, gig workers and self-employed people, who have been braving coronavirus at work for survival.

You can read the first, second and third stories here, on indigenous peoples, ISIL victims and the elderly.

When COVID-19 was surging in Los Angeles, street vending without license – which is what a large number of people do – was banned. Local health departments required all street food stalls without health permit to close. The police would seize everything and issue a ticket to anyone operating an unlicensed food stall.

In this backdrop, Arturo Suarez, a taco vendor from Tlaxcala, Mexico made a devil's bargain: the financial pain of not working outweighed the health risk of being exposed to the virus and fined by the police. After staying at his home for a few weeks, he was out on the street again with his pop-up gazebo, cold storage and everything he needed for his taco business.

"We do it now not because we don't want to respect the law; we do it for survival," said Suarez.

The coronavirus pandemic highlights the underlying inequality of economic systems. While the rich can take shelter and order services on delivery apps, the poor have to be out on the streets, living pay check to pay check to support the family. They are often under the threat of being arrested by authorities, or charged with misdemeanor for breaking the shelter-in-place or curfew order. 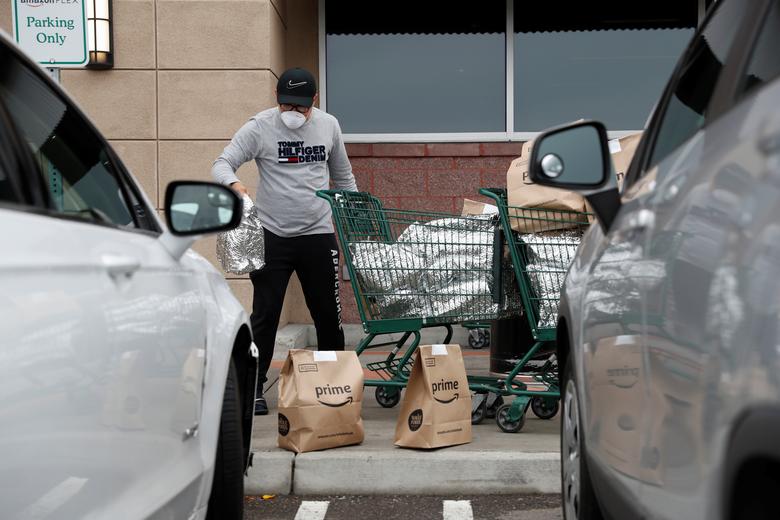 A gig worker with groceries delivered for Amazon customers in California, April 09, 2020. /Reuters

A gig worker with groceries delivered for Amazon customers in California, April 09, 2020. /Reuters

Before the pandemic hit, Suarez was a small catering business owner in Los Angeles, serving tacos at parties and doing catering services at events. He used to employ eight people, but now he has no one but himself and his wife who has been helping him occasionally. Business went down significantly, but rent did not.

Suarez is one of hundreds of thousands who braved coronavirus to work on the streets. With nearly 50 million Americans having filed for first-time unemployment benefits over the last 16 weeks, self-employment, gig jobs and on-demand jobs have been on the rise. Other than opening a small food stall or operating a food truck, many turned to the modern-day forms of gig work and delivering groceries, food and packages for app-based delivery companies.

In a similar fashion, Amazon announced plans to hire more than 100,000 new delivery and warehouse workers to deal with a surge in online orders.

Most tech companies that employ those gig workers treat them as independent contractors, not employees, a distinction which holds significant meaning when it comes to legal protection. For example, access to health benefits, sick pay and workers' compensation that full-time employees are entitled to is not provided for independent contractors. 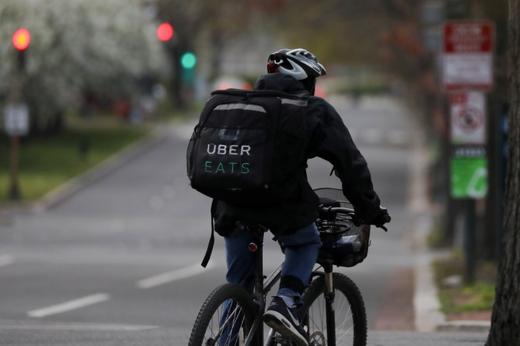 In a landmark bill passed late last year, California legislators required tech companies to treat their contractual workers as employees. But those tech giants have since launched aggressive lobbying efforts against the new classification, arguing that once gig workers are classified as employees, they have to plan their work schedule in advance, which deprives the flexibility that gig workers desired.

Most of the tech platforms have published health instructions for their gig workers, e.g. notifying them that once they feel sick, they should avoid taking up orders and promising to offer 14 days of financial assistance if they can show proof of COVID-19 diagnosis.

But in reality, these health benefits can be hard to claim. According to a CNET report, Instacart required gig workers, who feared having contracted the virus, to provide either a positive COVID-19 test result or mandatory quarantine order by a public health agency, both of which were hard to secure in the midst of the pandemic.

On top of that, it appears that many tech companies that employ hundreds of thousands of those gig workers, never inform them of the risks of arrests. 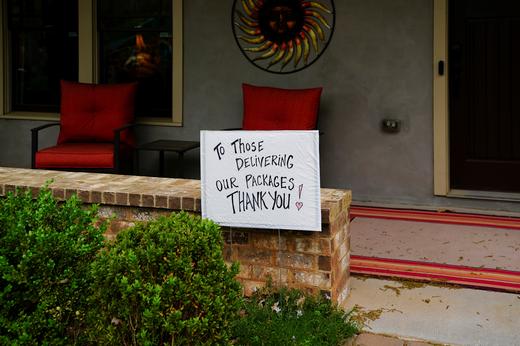 A lawn sign thanking delivery drivers is seen in the midst of the coronavirus pandemic in Atlanta, Georgia, U.S., April 8, 2020. /Reuters

A lawn sign thanking delivery drivers is seen in the midst of the coronavirus pandemic in Atlanta, Georgia, U.S., April 8, 2020. /Reuters

A video that went rounds in early June shows that a food delivery courier was arrested after curfew was imposed in New York City amid the pandemic and protests against the death of George Floyd. Though delivery people were exempted from curfew as essential workers, his appeal to the police officer to check his status as essential worker was ignored.

Many of the people that played a major role in keeping cities going are immigrants and undocumented people, whose immigration status or future prospect can quickly be disrupted and destroyed by an arrest record or a traffic ticket.

According to a study by San Francisco's Local Agency Formation Commission, which surveyed 643 gig workers across platforms like DoorDash, Instacart and others, 78 percent of gig workers are people of color and 56 percent are immigrants.

There are nonetheless positive signs that the pandemic has forced legislators and tech companies to change the welfare policy. More than 20 states have extended pandemic unemployment assistance to gig workers, freelancers and self-employed individuals, though delays are reported for workers to access the payment.

As Suarez said, "We'd like to be home, waiting for the quarantine to be over, but we have needs, so we keep on working." As cities try all means to contain the public health crisis, balancing that need with individuals' needs to survive is a test of their leadership.