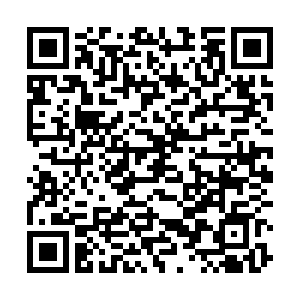 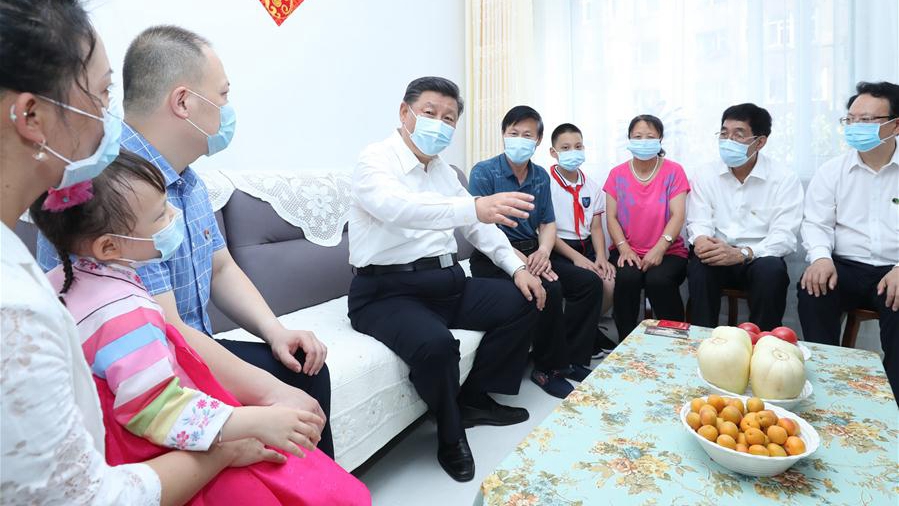 Chinese President Xi Jinping has called for further efforts to implement the strategy of revitalizing northeast China and promote high-quality development in one of the country's major industrial and agricultural bases.

Xi, who is also general secretary of the Communist Party of China (CPC) Central Committee, made the remarks during an inspection tour in northeast China's Jilin Province from Wednesday to Friday.

Xi visited rural areas, a residential community, a science park and a renowned enterprise in Siping and Changchun. At the end of the tour, he was briefed by Party and government officials of the province on their work.

The comprehensive revitalization of Jilin in the new era should be accelerated, he stressed, urging the province to work out a blueprint for its development in the 14th Five-year Plan period (2021-2025). 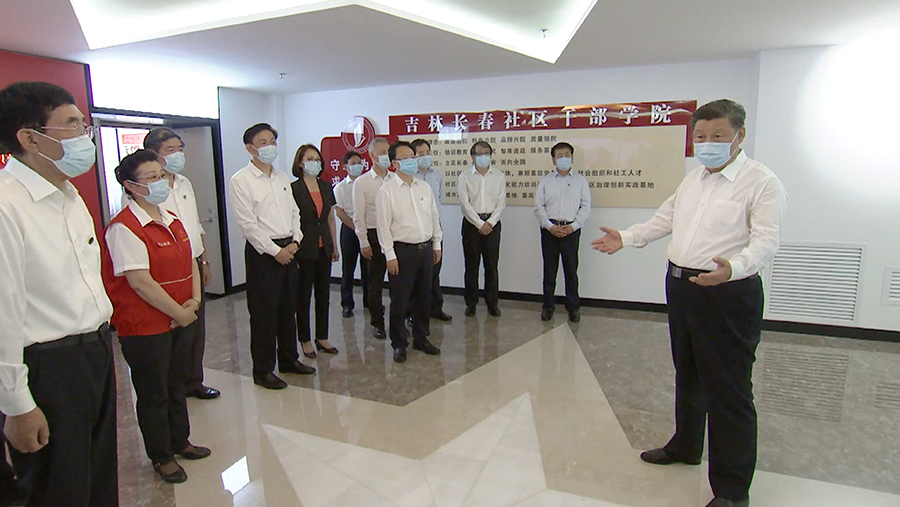 During his meeting with the officials of Jilin, President Xi called for advancing high-quality development of the economy and boosting economic competitiveness, innovation capability and the ability to withstand risks.

The authorities should deepen the reform of state-owned enterprises and support the development of private companies, he said, calling for measures to encourage entrepreneurial spirit and spur the vitality of market entities.

Jilin should actively participate in the Belt and Road Initiative (BRI) and play the roles of an important window in China's northward opening-up and a hub in Northeast Asian cooperation, he told the officials.

Xi underscored the opportunities brought by the country's rural vitalization strategy, calling for deepening reform in rural areas. Efforts should be made to consolidate the achievements in poverty alleviation and protect the environment, he added. 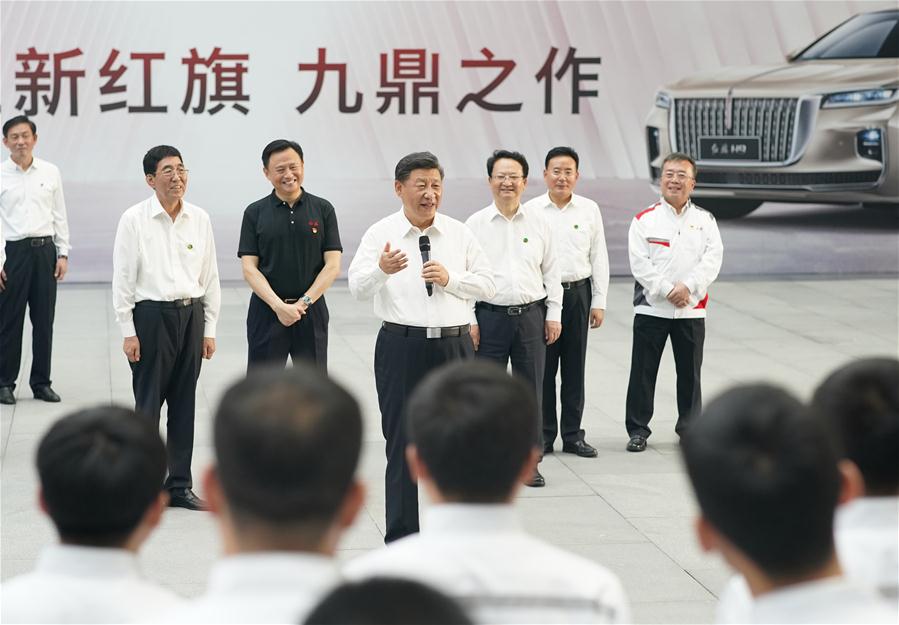 President Xi learns about the reform and development of state-owned enterprises at the R&D headquarters of automaker FAW Group in Changchun, Jilin Province, July 23, 2020. /Xinhua

President Xi learns about the reform and development of state-owned enterprises at the R&D headquarters of automaker FAW Group in Changchun, Jilin Province, July 23, 2020. /Xinhua

The president urged local officials to always attach great importance to the people's livelihood and employment, calling for efforts to protect and increase jobs. Meanwhile, the province should deepen educational reform and promote integrated and balanced development of compulsory education in both urban and rural areas.

Xi also stressed the importance of improving the system of prevention, control and treatment of major epidemics and called for more investment in the public health infrastructure.

Jilin, along with Heilongjiang and Liaoning provinces in northeast China, has been an important industrial and agricultural base for decades. But the development speed of the region has slowed down in recent years with the decline of the heavy industry and some large-scale state-owned enterprises. The central government made the strategy to revitalize northeastern China in 2003.

Xi has talked about the issue on many occasions, calling for a "comprehensive revitalization of the northeast" featuring a new industrial structure that facilitates balanced development. He visited Jilin in July 2015 and September 2018.

During his latest tour, Xi saw changes in the province and called for sticking to the country's new development philosophy that emphasizes innovative, coordinated, green, open and shared development. 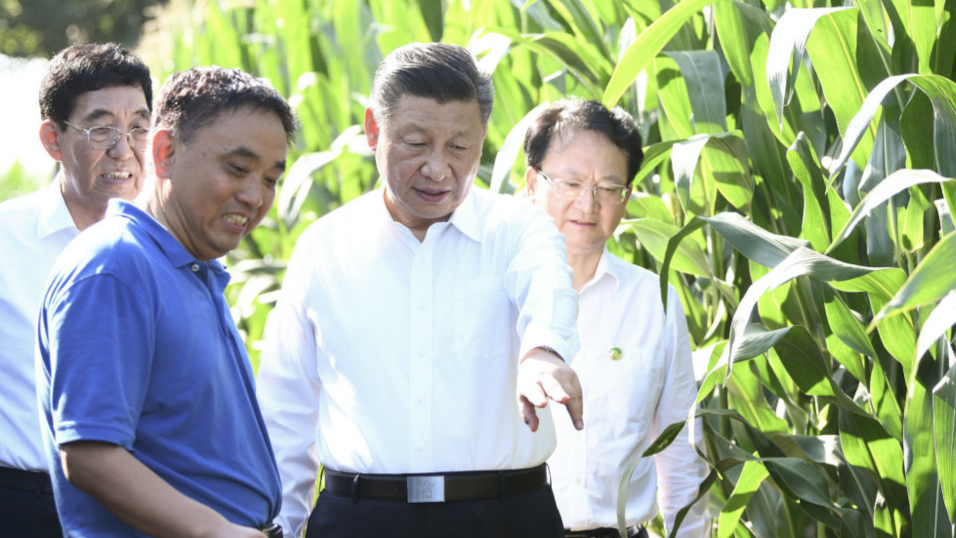 He visited a demonstration zone for green food production in Lishu County, Siping City on Wednesday to learn about the improvement of chernozem soil quality and the growth of corn, stressing that effective measures must be taken to protect black soil.

The local practice of returning maize straw to the farmland for mulching purposes not only increases soil organic matter but also helps prevent wind- and water-driven soil erosion and preserve soil moisture, Xi said, adding that such a model is worth promoting.

When visiting the R&D headquarters of automaker FAW Group in the provincial capital of Changchun on Thursday, he called for enhancing China's car brands.

Xi learned about the automaker's technological research and development as well as the latest models of its auto brand Hongqi, which means "Red Flag".

"We must ensure key and core technologies are in our own hands, and aspire to build strong domestic automobile brands," Xi said.

Jilin, with its fertile black soil, innovative cars and role in the BRI, is speeding up on the path of comprehensive revitalization in the new era.