Ambassador: China, India should attract each other like magnets, rather than 'decoupling'
Abhishek G Bhaya 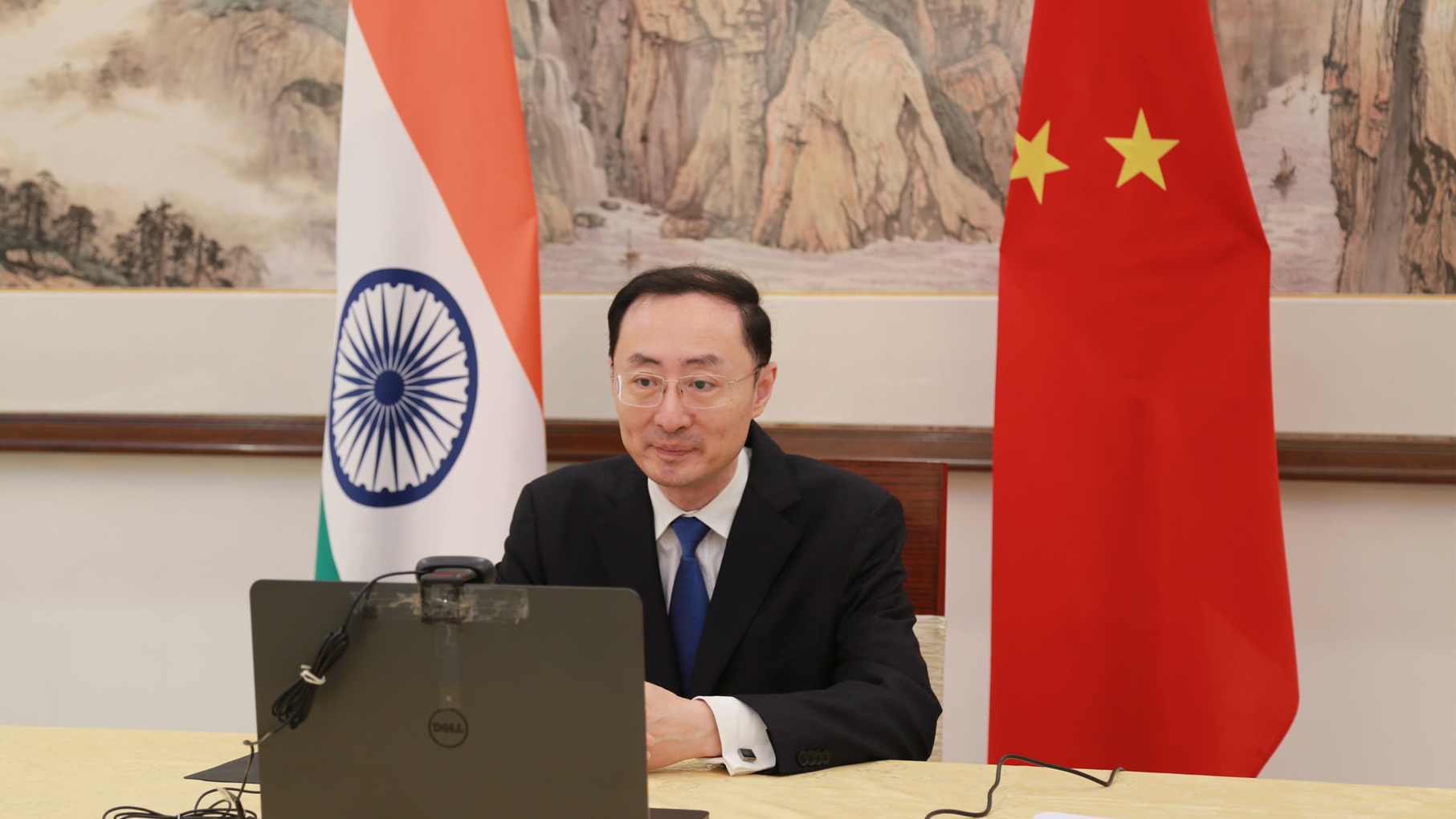 Economies of China and India should attract each other like magnets, rather than forcefully "decoupling" from each other, China's Ambassador to New Delhi Sun Weidong told an Indian news channel on Friday as the two Asian neighbors face a challenge to normalize bilateral ties that have taken a nosedive after a border clash on June 15.

Sun emphasized that while an early resolution of the border dispute must be encouraged, a single "unfortunate" incident shouldn't be allowed to derail the "partnership" that dates back to "thousands of years." The Chinese ambassador disagreed that bilateral ties are witnessing a "reset" as he called for bringing the relationship "back on the right track."

"China and India are partners rather than rivals to each other and present opportunities rather than threats. This is an important consensus reached by the leaders of our two countries and should be earnestly implemented," Sun told India's CNBC-TV18 channel.

Insisting that Beijing's "judgment on China-India relations remains unchanged," the envoy said, "It would be a miscalculation to treat a close neighbor for thousands of years as 'enemy' or 'threat' only by one issue or one incident. We should respect and support each other, avoid suspicion and misunderstanding, and enhance mutual political trust."

"We should put the boundary question at an appropriate place in our bilateral relations and not allow differences to disturb the relationship. Any action that enlarges and complicates the conflict will not help solve the problem. In fact, dialogue and negotiation is the only right way out," Sun said citing another consensus reached between Chinese President Xi Jinping and Indian Prime Minister Narendra Modi during their previous talks that differences should not be allowed to become disputes.

"I don't think there's a 'reset' in China-India relations. Our relationship should move forward, rather than backward or reverse. China and India should avoid mutual attrition, and not be opposed to each other. Instead, we should meet halfway to bring our relationship back on the right track at an early date," he said.

"The current difficulties we are facing in our bilateral relations have even highlighted the importance of transmitting and implementing the leaders' consensus. We cannot get cold feet or even back-pedaling in the face of temporary difficulties. More efforts need to be made at the working level to transmit and implement the leaders' consensus and translate it into action in order to bring our ties back on track," he added.

India has insisted that there cannot be business as usual till the border standoff in the Himalayan region of Ladakh is resolved. New Delhi has also taken several economic actions, including a ban on Chinese apps and restrictions on Chinese investments and imports, in retaliation to the border clash prompting a trade war and an economic decoupling between two of Asia's largest economies.

"We believe it is unreasonable to link boundary question with normal bilateral cooperation. I have noted there are emerging rational voices in India pointing out that such restrictive practices are both unrealistic and harmful to India's interests, and may eventually lead to a lose-lose situation," Sun said.

Reiterating that China-India economic and trade cooperation is mutually beneficial with win-win results, he noted that China's investment in India has contributed to India's economic development and created a large number of local jobs.

"In the era of globalization, countries in the world, including China and India, are interdependent and integrated with each other, forming a pattern 'where everyone has a stake'. I think the two major economies of China and India should attract each other like magnets, rather than be forcefully separated or even 'decoupled' from each other," the envoy asserted.

Sun admitted that India's "discriminatory restrictions do hurt China," but at the same time, "the Indian consumers and employees suffer too."

"It does no good to either of us. We hope that India will change its relevant practice and treat every enterprise and service provider from various countries equally, so as to create an open, fair and equitable business environment for all," he said, emphasizing that "suppression, self-seclusion and restrictions are not good for development. Only by being open, fair and transparent can we better integrate into global cooperation."

'Huawei has never had any security issue in India'

On reports of India planning to bar Chinese tech companies, including Huawei, from its 5G trials, Sun wondered if there's an official confirmation on this. "What I learn is that last year, the Department of Telecommunications (DOT) of India invited enterprises from various countries, including Huawei, to participate in 5G trials."

"As a private enterprise, Huawei has achieved a leading position in 5G technology. However, a certain country is suppressing a Chinese private company. It attempts to hinder normal market cooperation and scientific and technological development under the pretext of 'national security' without any factual basis and concrete evidence," Sun said in a clear hint to the U.S.

"Such kind of hegemonic actions violate the rules of the market and the principle of fair competition, and it will eventually damage its own interests and credibility," he added.

The ambassador emphasized that Huawei has been operating in India for 20 years and created a number of local jobs, promoted sufficient competition in India's telecommunications market, and provided high-quality and low-cost products and services to Indian telecom operators and consumers.

"Huawei has never had any security issue in its operations in India. Furthermore, Huawei is ready to enter into a 'no-back-door' agreement with India. We hope India can make an independent, fair and right judgment in this regard and provide an open, fair, transparent and non-discriminatory business environment for Chinese enterprises to invest and operate in India," he said.

Describing the Galwan incident as "an unfortunate one," Sun noted that the bilateral communications channels are "open and smooth" and that the two sides continue to pursue dialogue and negotiations.

"We have held five rounds of Corps Commanders meetings and four rounds of meetings of Working Mechanism for Consultation and Coordination on China-India Border Affairs (WMCC). The troops on the ground have maintained communication. We have met every week on average after June 15, and both sides take it very seriously to address the issue," the envoy elucidated.

Sun noted that both sides have reached an important consensus of pushing forward disengagement and de-escalation through dialogue and negotiations and maintain peace and tranquility in the border areas.

"The existing situation on the ground is under control on the whole and there is no fresh standoff between the two forces. Of course, negotiations are in process that takes time. We should keep the momentum of dialogue and negotiation, further de-escalate the border situation, properly handle the remaining issues, and jointly maintain the peace and tranquility along the border areas," he said.

China is not 'expansionist'

The Chinese ambassador strongly refuted allegations of "Chinese expansionism" claimed by some international and Indian media. "China always stands for peaceful settlement of boundary disputes through dialogue and negotiation. Meanwhile, it is the legitimate right of every country to safeguard its own sovereignty and territorial integrity. This is not the same thing as expansionism," he said.

"China should not be labeled as expansionist. Both China and India are victims of imperialism and colonialism. We should work together to oppose hegemony, power politics and expansionism," Sun added.

The envoy maintained that while an early resolution of China-India border dispute is ideal, the issue "is a leftover from history" and therefore "very complicated and sensitive."

"It needs patience to resolve. We should seek a fair, reasonable and mutually acceptable solution through equal consultation and peaceful negotiation," he reiterated.

Stressing that China has a sincere political will to resolve the boundary question, he said Beijing is committed to actively advancing border talks, formulating roadmap for framework discussions, and pushing forward consultation on "early harvest."

"We hope the Indian side would equally show political will and move forward towards the settlement of boundary question," Sun said.