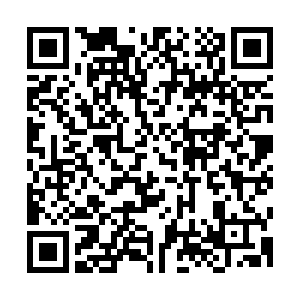 Since the Nagorno-Karabakh ceasefire went into effect on Saturday, Armenia and Azerbaijan have exchanged recriminations, seriously violating the agreement that was meant to quell fighting over the disputed region.

Azerbaijan's defense ministry said it was open to the temporary humanitarian ceasefire agreed in Moscow to exchange prisoners and bodies of those killed in the fighting. It insisted that Azeri forces were not violating the truce and accused Armenian forces of breaching the agreement by shelling the Azeri territories of Goranboy, Aghdam and Terter. 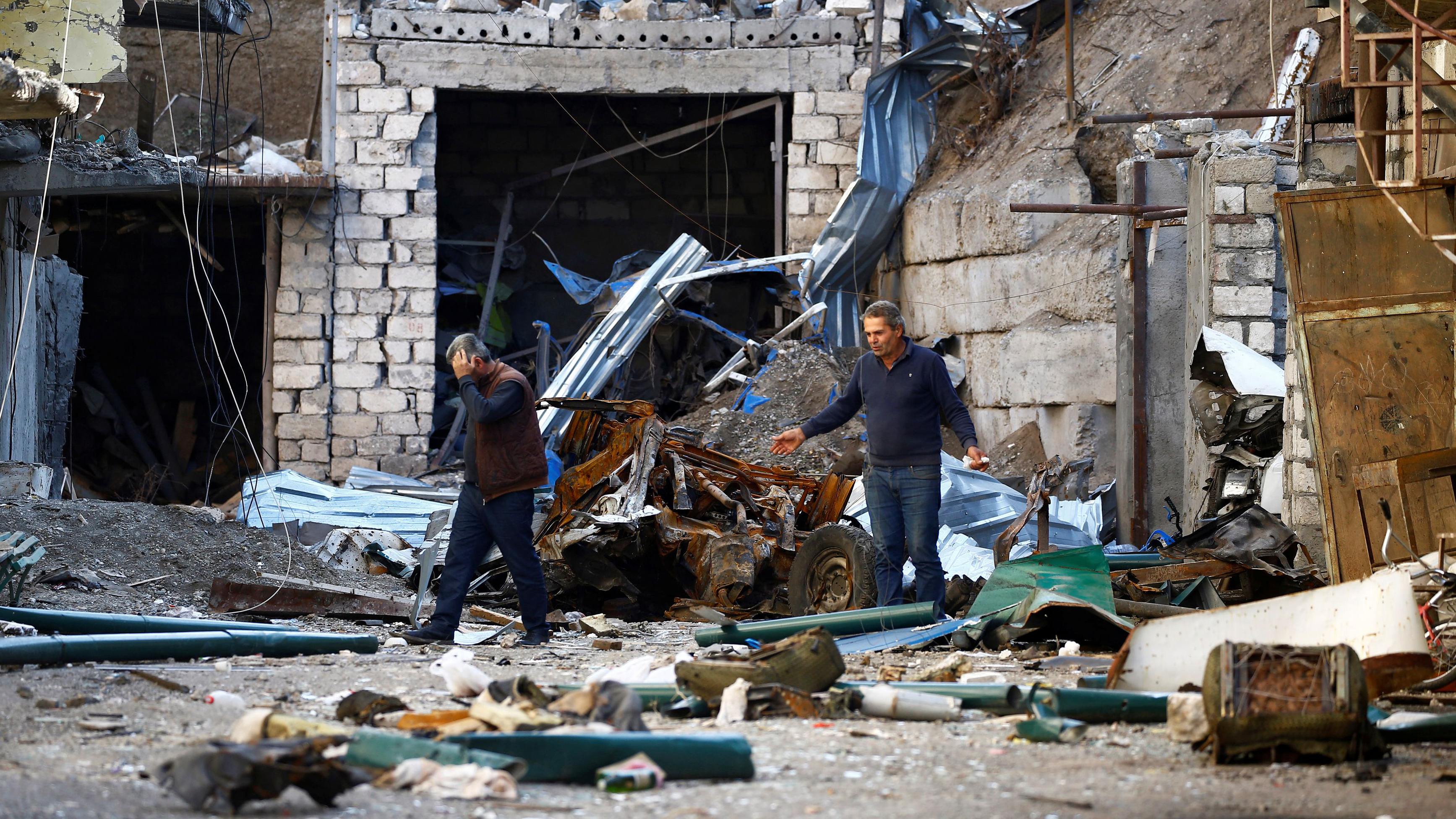 Men are seen among the ruins after recent shelling during the military conflict over the region of Nagorno-Karabakh, in Stepanakert, October 13, 2020. /Reuters

Men are seen among the ruins after recent shelling during the military conflict over the region of Nagorno-Karabakh, in Stepanakert, October 13, 2020. /Reuters

Meantime, the death toll in the conflict continues to rise. Officials at the Nagorno-Karabakh region said 532 servicemen had been killed so far, seven since Monday. Azerbaijan has reported 42 Azeri civilian deaths and 206 others wounded since the fighting erupted on September 27. It has not disclosed military casualties.

With sporadic shelling reported and daily recriminations regarding serious alleged violations of the Moscow-brokered agreement, the unrestrained battle has drawn warnings from international groups of a humanitarian crisis.

Martin Schuepp, Eurasia regional director for the International Committee of the Red Cross (ICRC), said his organization was in "continuous discussions" to facilitate the handover of detainees or bodies of those killed, but because of the security situation, the ICRC has not been possible to access all locations that might have been affected.

Schuepp said the ICRC is appealing for another 10.1 million U.S. dollars to fund its humanitarian efforts in the region, as tens of thousands of people potentially need help in coming months.

Armenia's new COVID-19 cases had doubled over the 14 days up to Monday, while new infections were up approximately 80 percent over the past week in Azerbaijan, Jasarevic told. 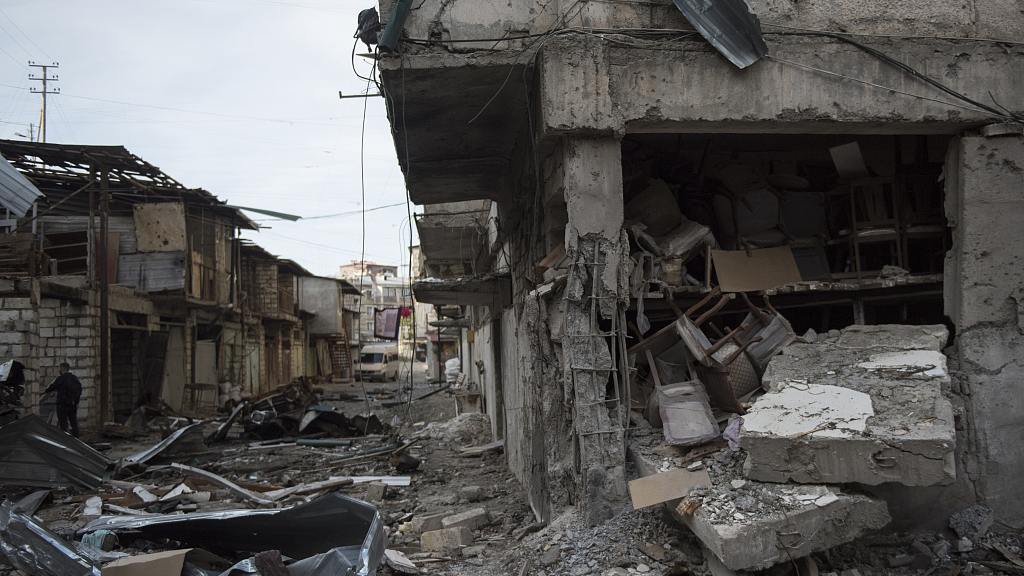 The ruins after recent shelling during the military conflict over the region of Nagorno-Karabakh, October 11, 2020. /VCG

The ruins after recent shelling during the military conflict over the region of Nagorno-Karabakh, October 11, 2020. /VCG

The Russia-brokered truce is buckling despite mounting calls from world powers to halt the fighting. The Co-Chairs of the Minsk Group, a committee set up by the Organization for Security and Co-operation in Europe, to help mediate in Nagorno-Karabakh released its latest statement on Tuesday, calling on the Armenian and Azeri leaders to "take immediate steps to execute in full the obligations of the sides according to the October 10 Moscow statement," to prevent catastrophic consequences for the region.

The Co-Chairs reiterated that civilian casualties are unacceptable under any circumstances.

The 11-member group is led by the U.S., Russia and France. Turkey is also a member but not involved in the Nagorno-Karabakh talks, though it has said it wants to join them. 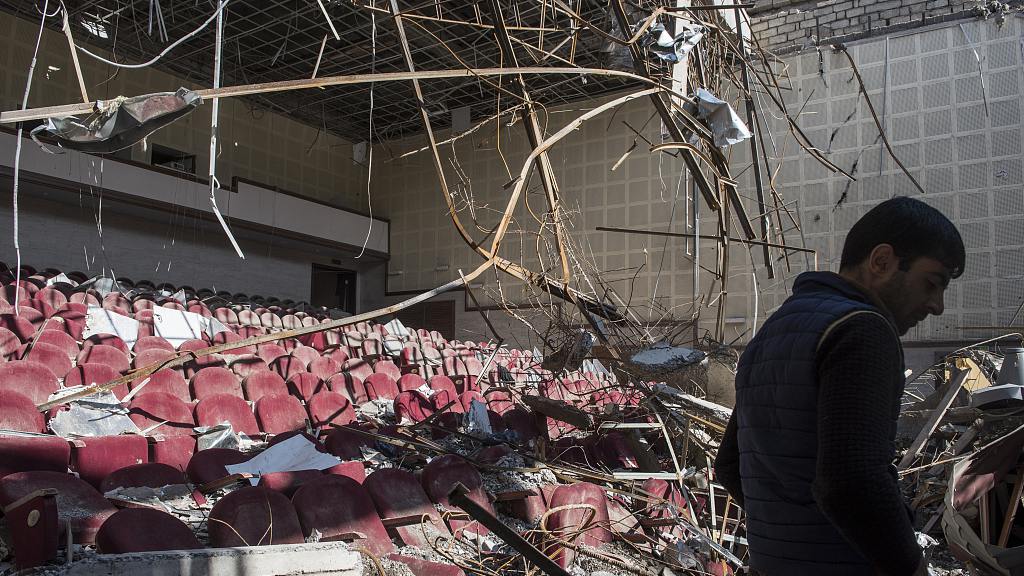 A theater is seen destroyed during the military conflict over the region of Nagorno-Karabakh, October 11, 2020. /VCG

A theater is seen destroyed during the military conflict over the region of Nagorno-Karabakh, October 11, 2020. /VCG

Turkey and Armenia have each blamed the other for exacerbating the crisis around Nagorno-Karabakh, which is internationally recognized as part of Azerbaijan but governed and populated by ethnic Armenians.

Armenian Prime Minister Nikol Pashinyan said he believed that only a change in Turkey's stance on Nagorno-Karabakh could prompt Azerbaijan to halt military action over the tiny region.

"I'm convinced that for as long as Turkey's position remains unchanged, Azerbaijan will not stop fighting," Pashinyan said.

He accused Turkey of sabotaging the ceasefire and of trying to muscle its way into the wider South Caucasus region to further what he called its expansionist ambitions. 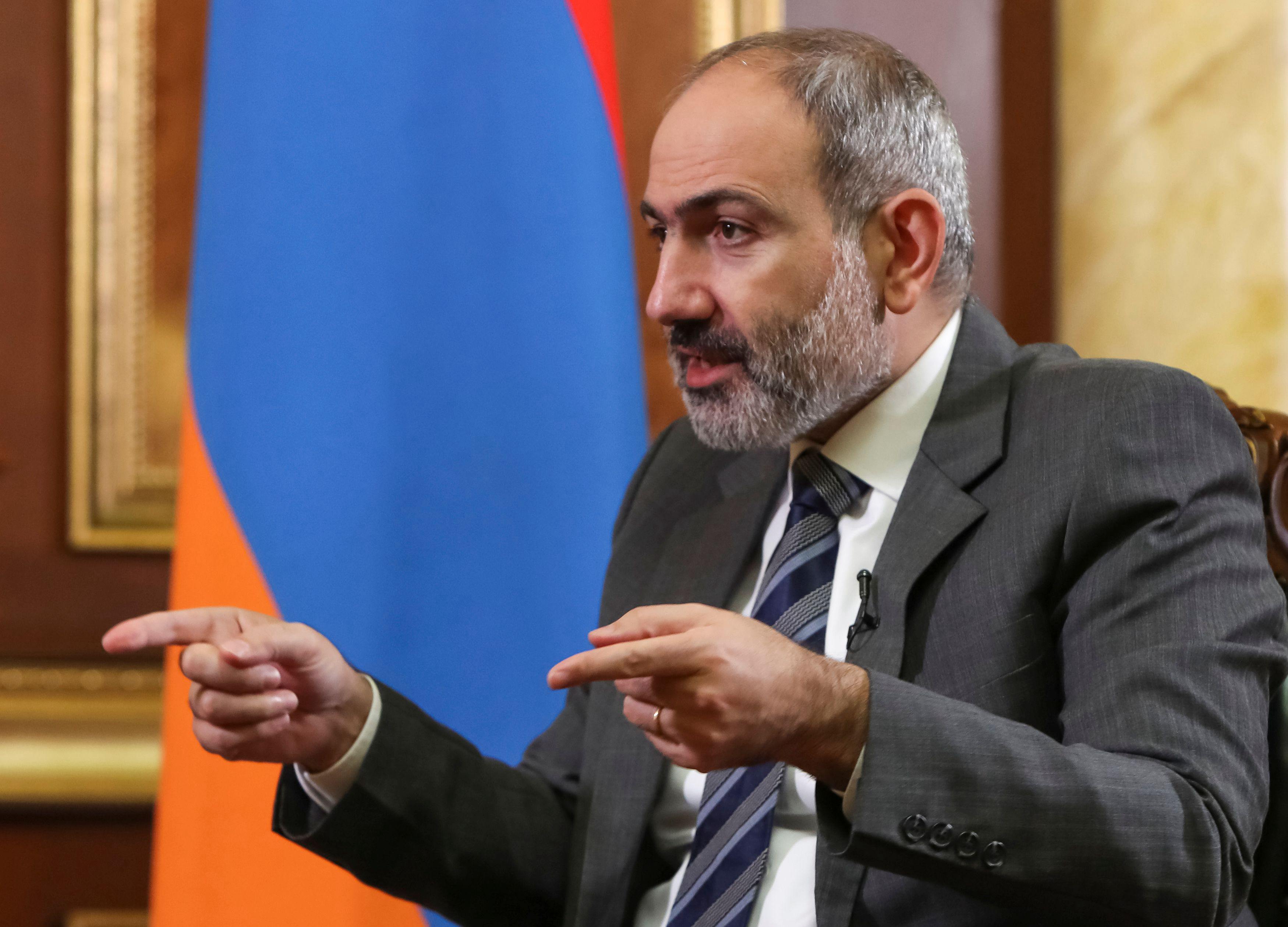 Since fighting flared on September 27, Turkey has backed Azerbaijan strongly and said Armenian forces must leave the enclave.

Turkey's Foreign Minister Mevlut Cavusoglu said on Tuesday that the demands for a ceasefire were "reasonable" and the international community should ask Armenia to withdraw from Azeri territory.

Turkey has been widely accused of dispatching pro-Ankara Syrian militia to assist Baku, a claim denied by both Turkey and Azerbaijan. According to the Britain-based Syrian Observatory for Human Rights, 1,450 such fighters have gone to Azerbaijan including 250 in the last week alone.

In a phone call on Monday with his Turkish counterpart, Russian Defense Minister Sergei Shoigu raised the issue of Syrian fighters, and on Tuesday, Russia warned of the possible transfer of Syrian militants from the Middle East to Nagorno-Karabakh.