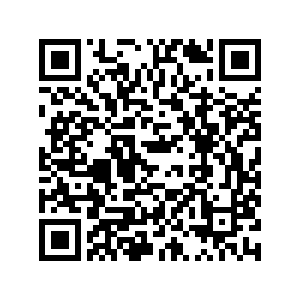 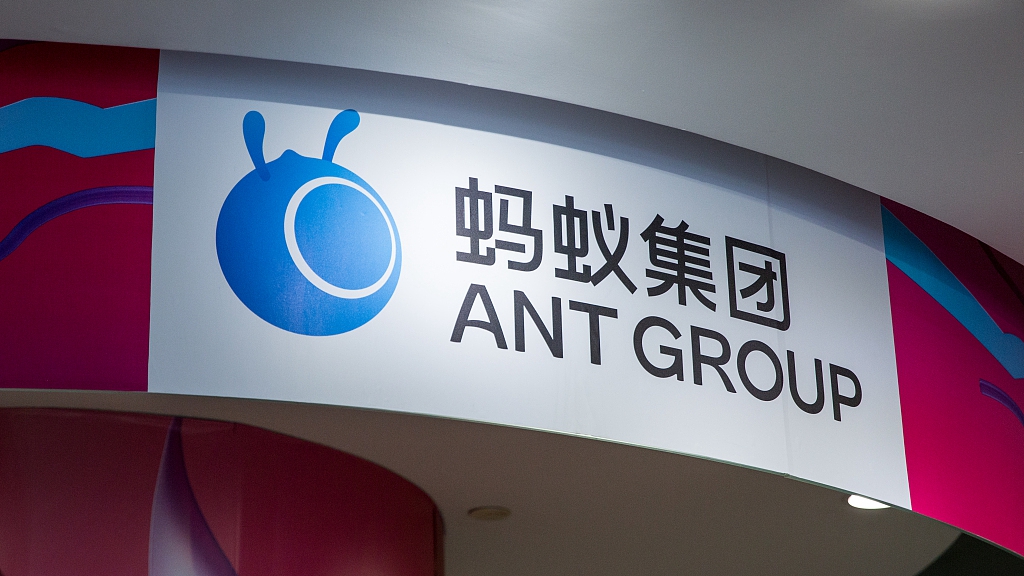 After the Shanghai Stock Exchange announced on Tuesday evening the postponement of Ant Group's listing on the Nasdaq-style STAR Market, the fintech giant announced later on the same day the suspension of its listing in Hong Kong.

As Ant reported, after joint talks with regulators, some major changes, including changes of regulation in the fintech industry, may result in a failure of meeting IPO standards or information disclosure requirements, therefore, SSE decided to postpone the listing of Ant, which was scheduled for Thursday, SSE said in the notice. 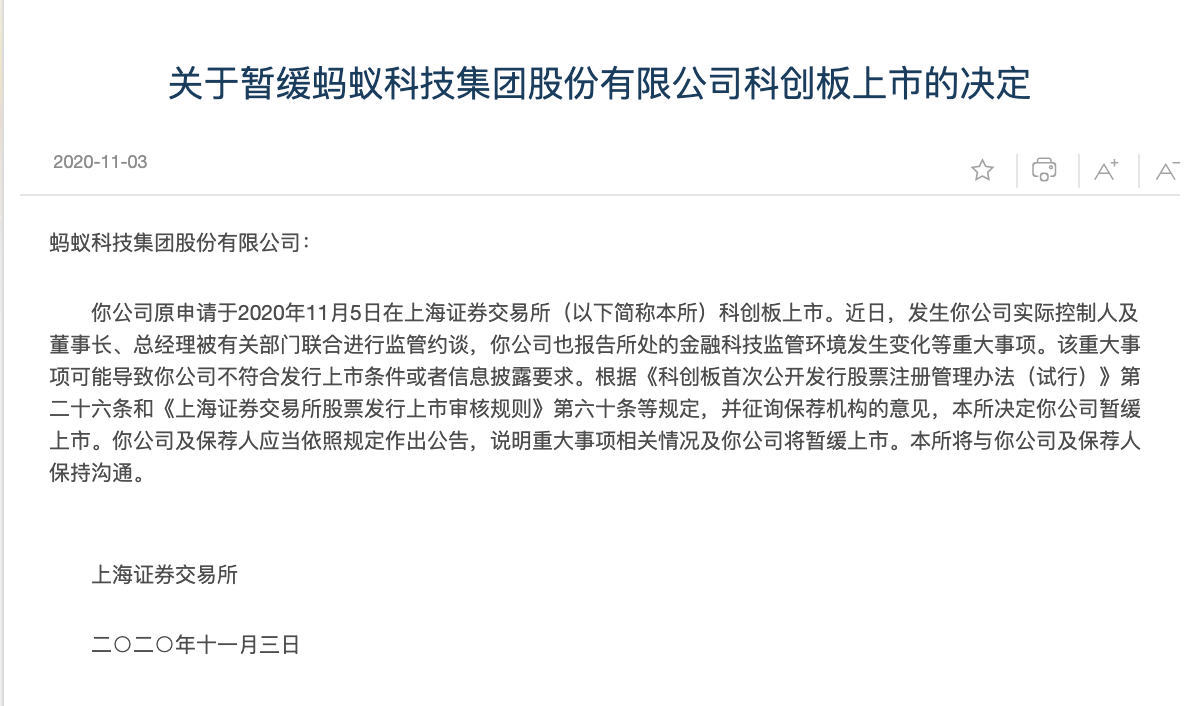 Less than an hour later, Ant announced the suspension of its listing in Hong Kong due to the SSE's decision. 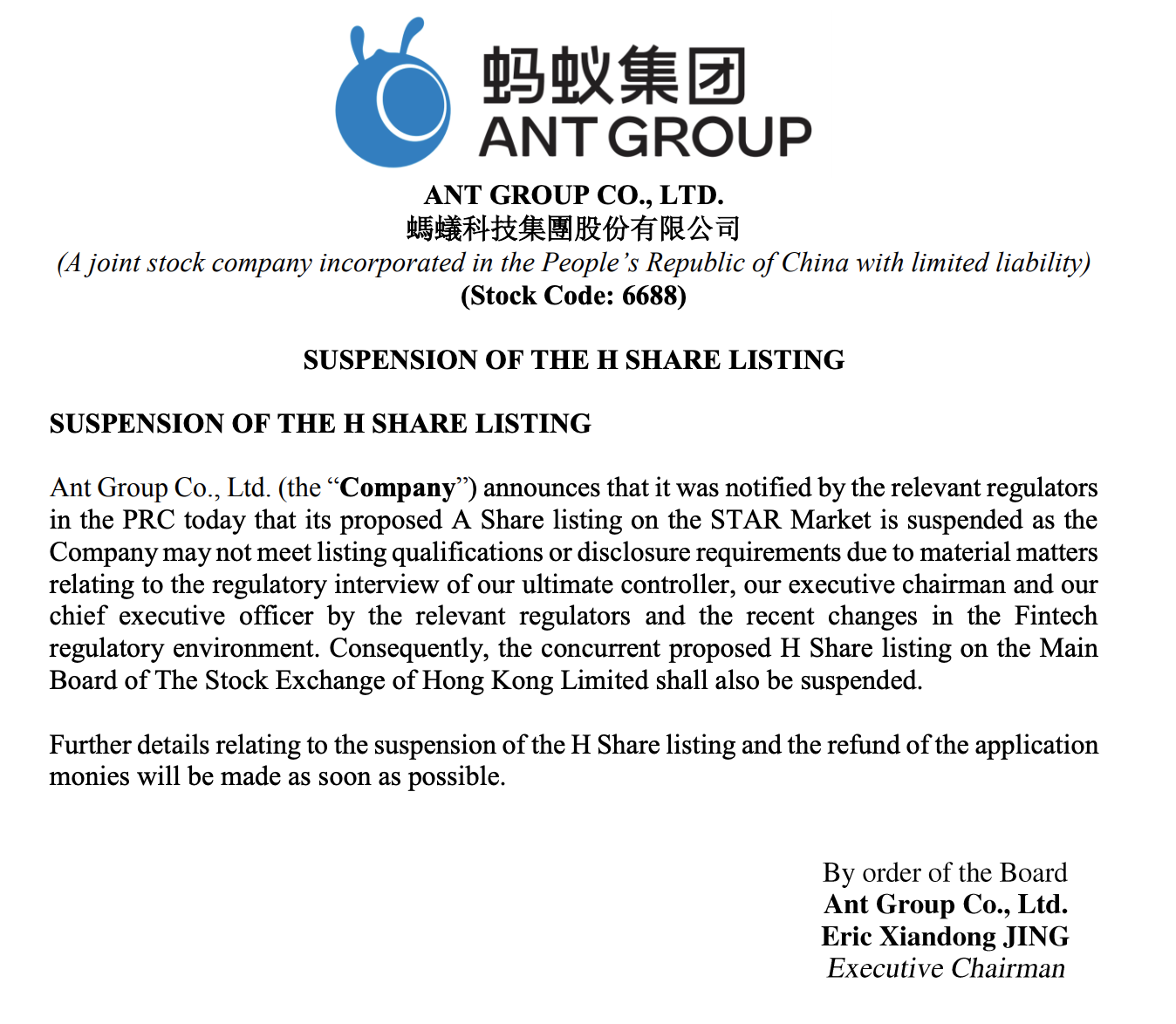 Screenshot of Ant's filing to the Hong Kong Stock Exchange

Screenshot of Ant's filing to the Hong Kong Stock Exchange

On Wednesday morning, Ant said the application monies relating to the Hong Kong public offering, together with brokerage commission and transaction fees, will be refunded in two batches without interest. 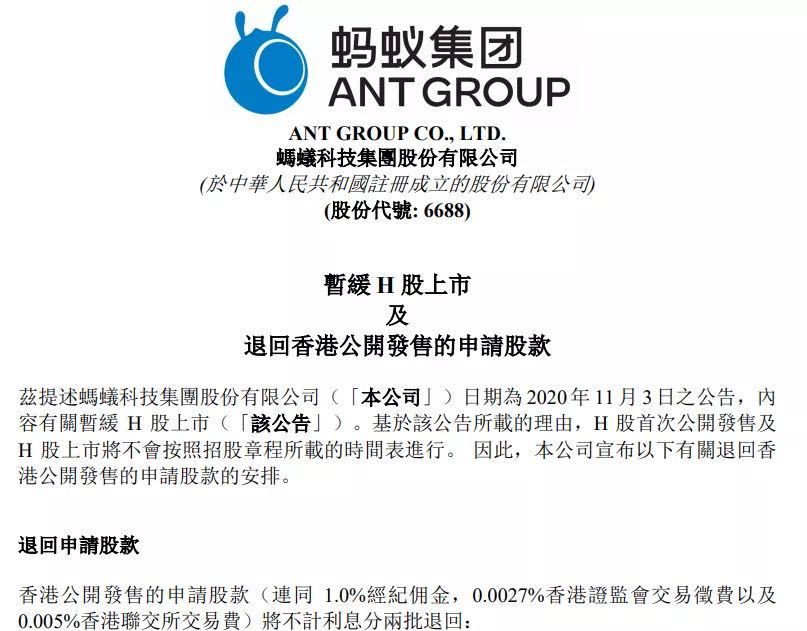 A spokesperson for the government of the Hong Kong Special Administrative Region said it is aware that Ant Group had notified HKEX of its decision to temporarily suspend the listing of H shares in Hong Kong, and that it had issued an announcement to explain the reasons, according to Radio Television Hong Kong, a public service broadcasting service.

The spokesperson said that HKEX has experience in handling decisions not to proceed with the IPO after subscription periods expire, and the regulator will ensure that the refunding arrangements proceed in an orderly manner.

The spokesperson also noted that the matter does not involve systemic risks, and the stability of the Hong Kong financial system and the orderly operation of the market will not be affected.

Following the IPO suspensions, shares of Alibaba, which owns a 33-percent stake in Ant, plunged 8.1 percent on the New York Stock Exchange on Tuesday. Alibaba said in a statement that it would work with Ant Group to actively "adapt to and embrace the evolving regulatory framework."

Ant apologized to investors in a statement, saying the company "will properly handle the follow-up matters in accordance with applicable regulations of the two stock exchanges."

In the statement, the company reiterated the feedback after the Monday talk with regulators: the principles of stable innovation, embracing regulation, service to the real economy and win-win cooperation.

The company said it will keep in close communications with the Shanghai Stock Exchange and relevant regulators, and wait for their further notice with respect to further developments of Ant's offering and listing process and disclose in a timely manner, according to the statement.

Previously known as Ant Financial, the Hangzhou-based company was the fintech arm spun out of Alibaba Group. Ant is the parent company of China's largest mobile payments business Alipay, which has over 700 million monthly active users in the country.

(Yao Nian contributed to the story.)