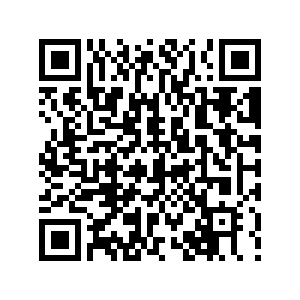 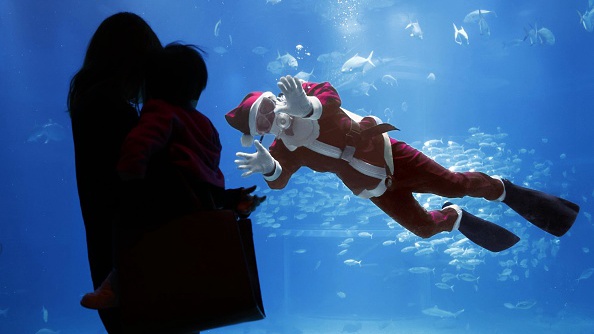 A diver in a Santa Claus suit swims in a fish tank at the Kaiyukan aquarium in Osaka, Japan, November 27, 2020. /Kyodo News via Getty

A diver in a Santa Claus suit swims in a fish tank at the Kaiyukan aquarium in Osaka, Japan, November 27, 2020. /Kyodo News via Getty

Between travel restrictions, social distancing rules and limits on family gatherings, Christmas will be a different, more subdued affair this year. So here is a pick of the week's funny, quirky and surprising news from around the world to bring a little seasonal cheer. Merry Christmas! 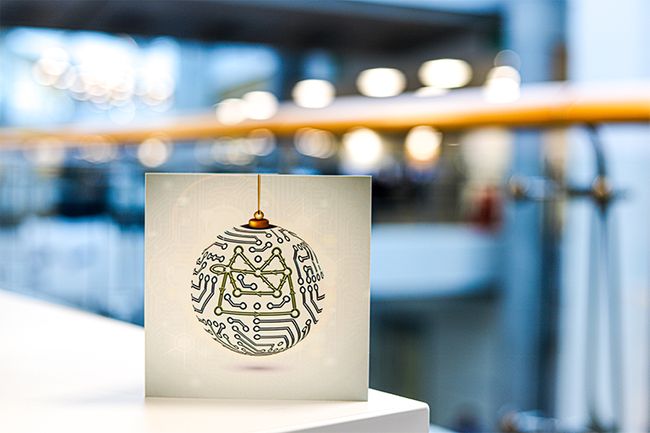 Can you solve this puzzle? The UK's intelligence, security and cyber agency GCHQ put out a Christmas card this year that is sure to keep you busy through the holiday season.

The card, sent to all GCHQ employees, was also posted online as a challenge to puzzlers worldwide. The task involves completing a series of letter sequences and assembling the answers on a Christmas bauble to reveal a hidden message.

"Problem solving is at the heart of what we do. Taking on this Christmas cracker gives puzzlers an insight into the skills you need to be a GCHQ analyst," the agency said in its challenge.

You can give it a try yourself here, and see if you're maybe cut out to be the next super-spy! 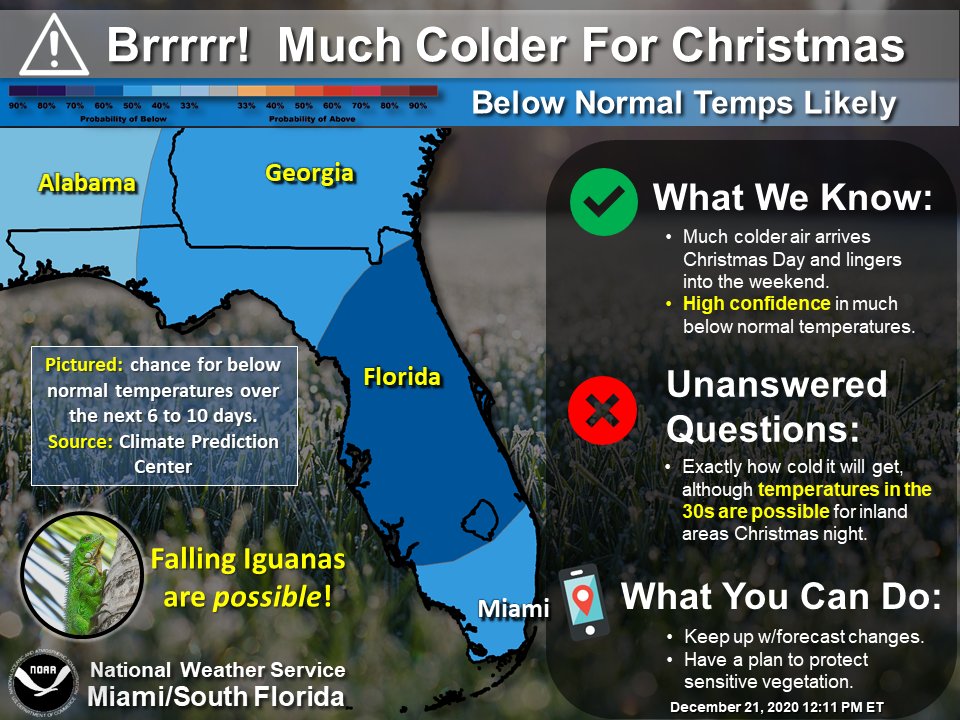 Snow falling on Christmas Day is a lovely sight. Floridians however may encounter something heavier when temperatures drop.

"Brrr! Much colder temps expected for Christmas. Low temperatures in the 30s/40s and falling Iguanas are possible," the National Weather Service Miami tweeted on Monday, with an accompanying weather – and iguana – warning.

The giant lizards like to sleep in trees and it seems that in colder temperatures – 30 or 40 degrees Fahrenheit is equivalent to about 0 to 4 degrees Celsius – they go stiff and fall off.

Not to worry, once exposed to a little sun again they will be right as rain, experts say. But in the meantime, humans should stay away from them as they can bite and scratch.

Santa in a tangle 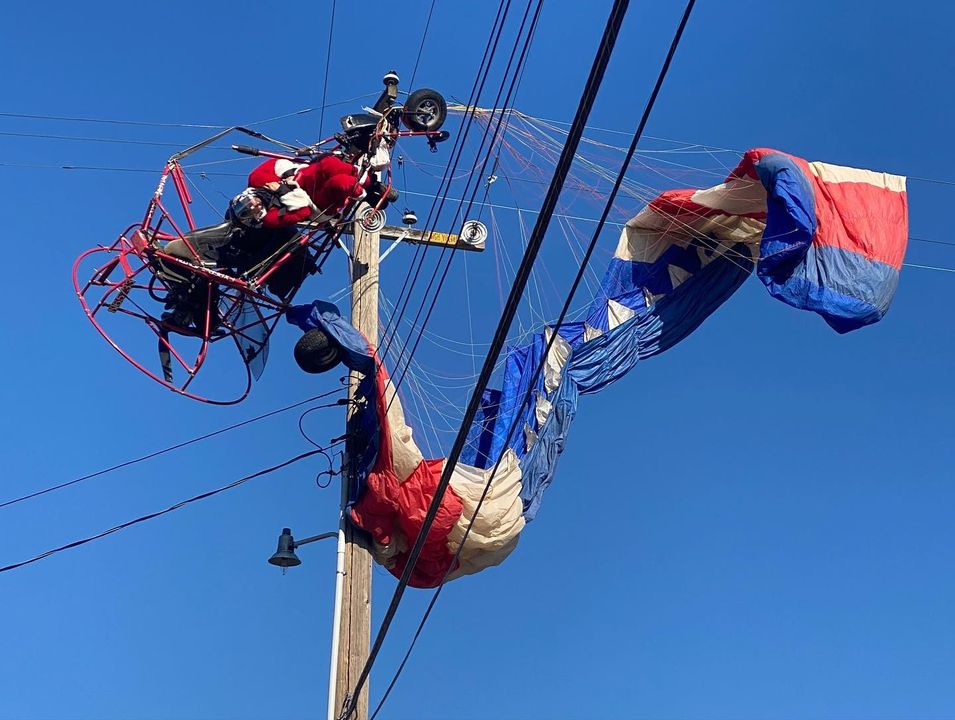 A photo of Santa and his sleigh tangled in power lines, posted by CHP - North Sacramento on Facebook, December 20, 2020. /@CHPNorthsac

A photo of Santa and his sleigh tangled in power lines, posted by CHP - North Sacramento on Facebook, December 20, 2020. /@CHPNorthsac

Santa Claus had to be rescued after he became tangled in power lines in California on Sunday, in what can only be assumed was a trial run for December 24.

The Sacramento fire department was called to free Santa and his sleigh after they crashed into power lines while using a motorized parachute to distribute candy canes to children, media reports said.

California Highway Patrol's North Sacramento division posted pictures of the operation on Facebook, confirming that Santa had "got into a hot wire situation" but adding "Don't worry! he wasn't hurt."

Sacramento's fire department also tweeted reassurance: "We are happy to report #Santa is uninjured and will be ready for #Christmas next week, but perhaps with a new sleigh!" 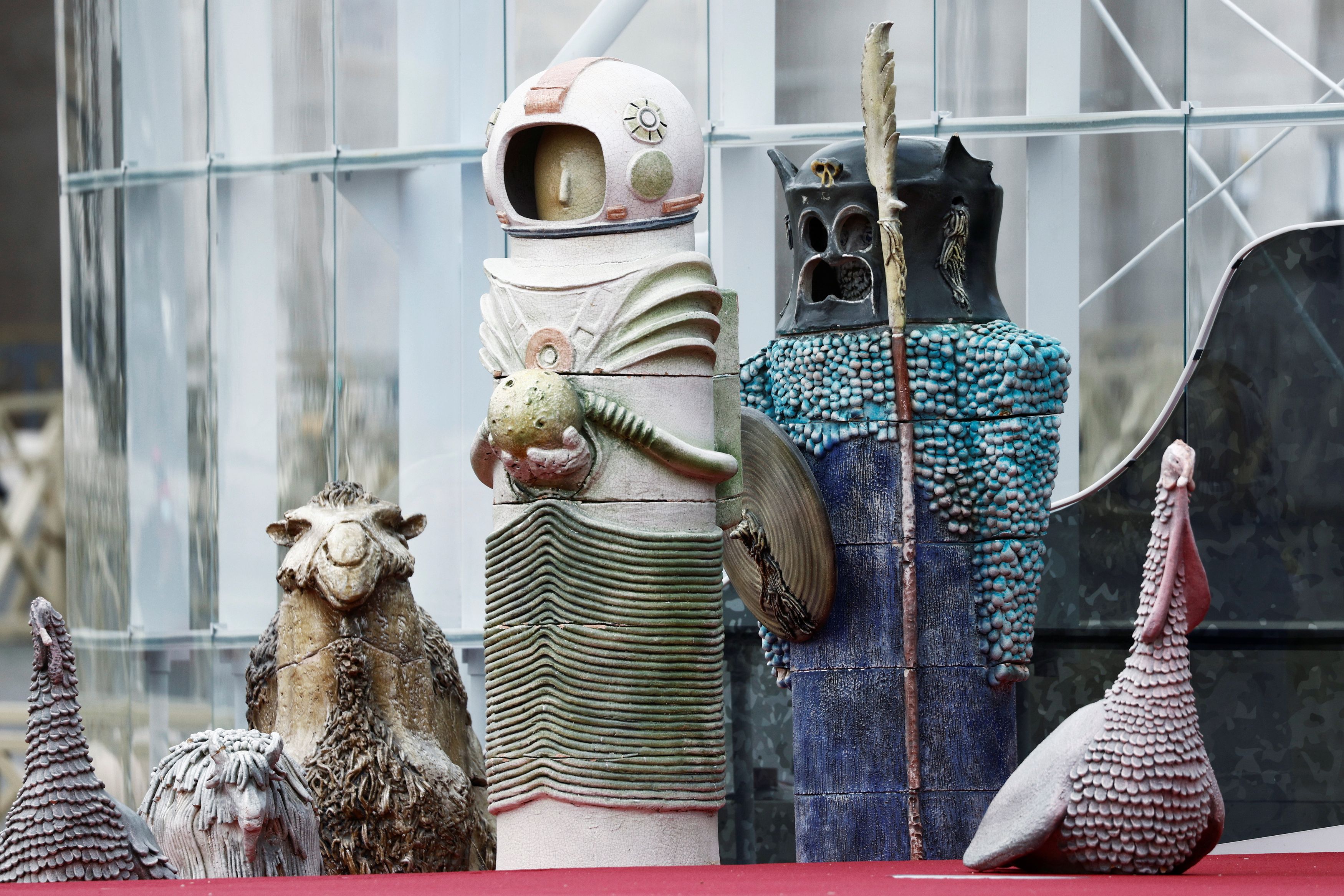 An astronaut figurine and another that resembles Darth Vader stand among the nativity scene displayed at the Vatican, December 15, 2020. /Reuters

An astronaut figurine and another that resembles Darth Vader stand among the nativity scene displayed at the Vatican, December 15, 2020. /Reuters

The annual nativity scene set up in St. Peter's Square this year is truly out of this world.

Every year the Vatican uses a different nativity scene usually donated by towns and artists. But this creation has raised some eyebrows. The issue: Darth Vader seems to have joined Mary, Joseph and the baby Jesus in the manger scene.

A statue with a black helmet and armor, looking like the Star Wars villain, stands next to another resembling an astronaut.

Despite the modern interpretation, the nativity scene was actually created between 1965 and 1975 – before the first "Stars Wars" film was released – by an art school in Castelli, a town known for its ceramics, and has gone on display around Italy before.

Reactions to this year's display have been mixed, ranging from cute and original, to bizarre and disturbing.

It has also sparked a series of memes online, with social media users posting images of DIY nativity scenes made from toys and cans of soda with the tag "still better than the Vatican's 2020 Nativity," and others showing the astronaut figure planting a Vatican flag on Mars.

Santa is free to travel! 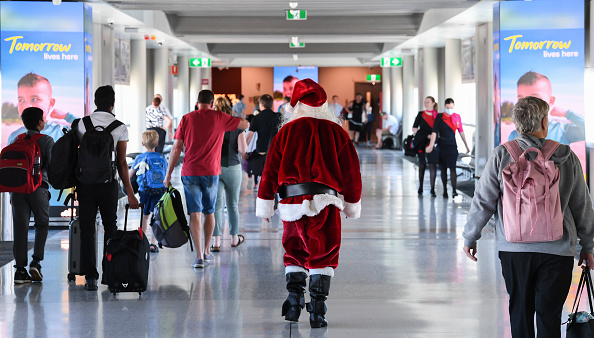 Steve Anderson, a Qantas pilot who often flies as Santa Claus around Christmas time, makes his way to his aircraft at Brisbane Airport on December 16, 2020 in Brisbane, Australia. /Getty

Steve Anderson, a Qantas pilot who often flies as Santa Claus around Christmas time, makes his way to his aircraft at Brisbane Airport on December 16, 2020 in Brisbane, Australia. /Getty

If we are honest, there is only one thing everyone wants to know this Christmas: will Santa be able to travel and deliver all his presents amid COVID-19 restrictions? And the answer is a resounding yes!

At a press conference last week, the World Health Organization (WHO) announced the happy news that "Santa Claus is immune to this virus."

"I understand the concern for Santa because he is of older age," Maria Van Kerkhove, the WHO's technical lead on COVID-19, told reporters. "We had a brief chat with him and he is doing very well and Mrs Claus is doing very well and they're very busy right now," she added, assuring: " Santa will be able to travel around the world to deliver presents."

Several world leaders, including New Zealand's Jacinda Ardern, and even local mayors, have come out to say that Santa will be exempt from quarantine rules and free to use their airspace to deliver his many presents.

The U.S. Federal Aviation Administration announced on Wednesday that "it has granted Santa Claus and his reindeer-powered sleigh special operating authority to engage in interstate air-cargo-delivery services directly to rooftops throughout the United States on Christmas Eve."

"Let's face it, 2020 was a difficult year and we all could use some special holiday cheer that only Santa can deliver," the FAA said in a statement.

But even the great Santa must comply with COVID-19 safety regulations. The French town of Riotord published a municipal decree earlier this month allowing him to land in the town on Christmas. However, he will only be allowed six elves and "face masks will be mandatory when they go down chimneys," it said.

Ireland's Foreign Minister Simon Coveney meanwhile noted that children need not stay up on Christmas Eve to wait for Santa as he will need to maintain social distancing.