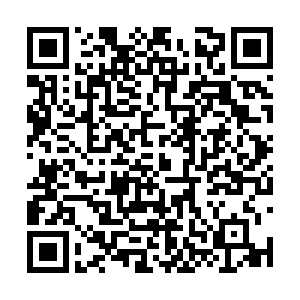 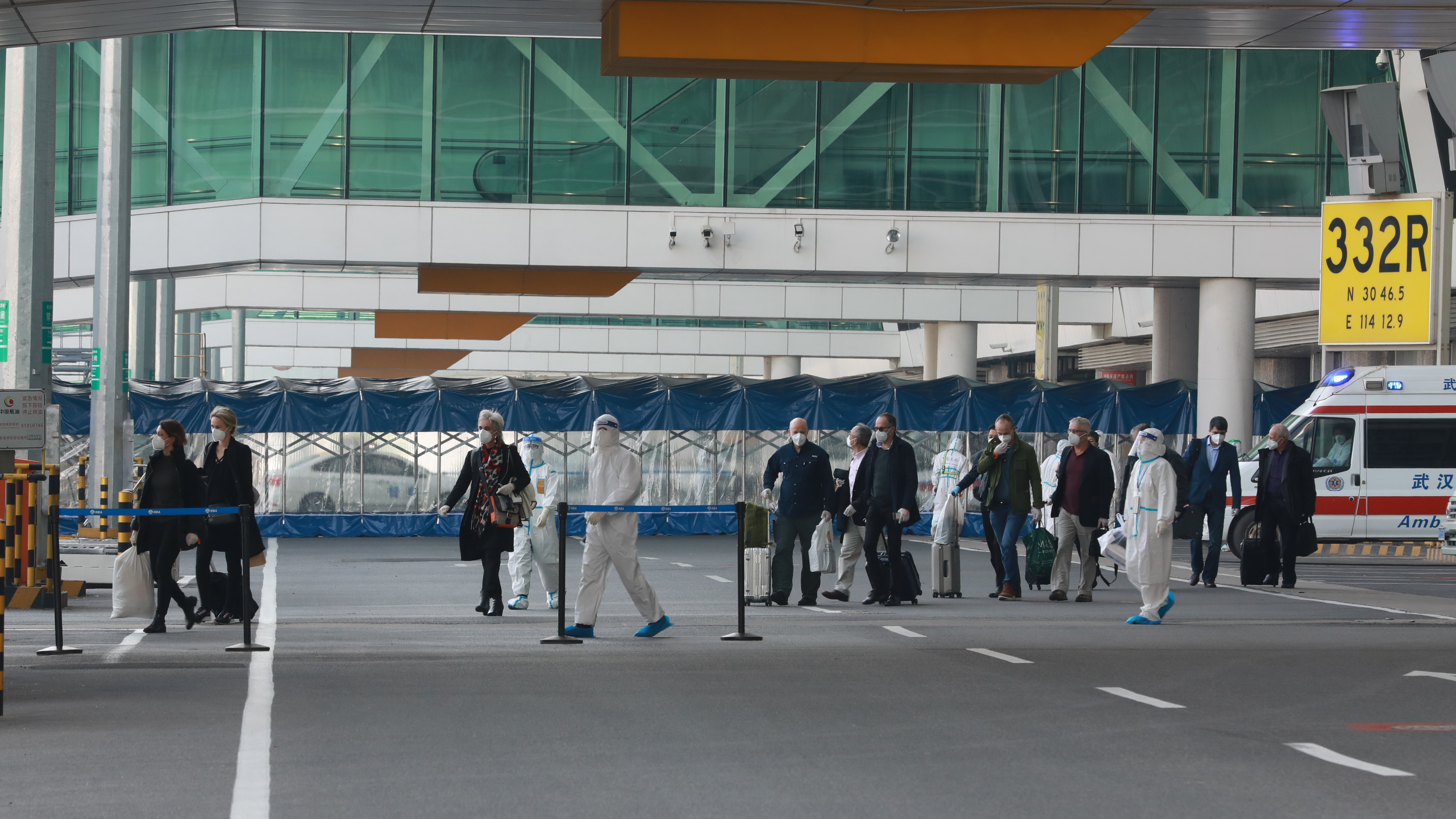 WHO experts arrive in Wuhan for COVID-19 origin mission

A panel of World Health Organization (WHO) scientists arrived in the central Chinese city of Wuhan on Thursday on a mission to research the origins of the novel coronavirus.

According to China's National Health Commission, the WHO team will need to go through relevant quarantine procedures required under China's epidemic control measures before conducting field work.

The WHO chief, Tedros Adhanom Ghebreyesus, also urged for unity during this hard time, calling on all countries to share the genetic sequence and relevant data for research into COVID-19 variants. 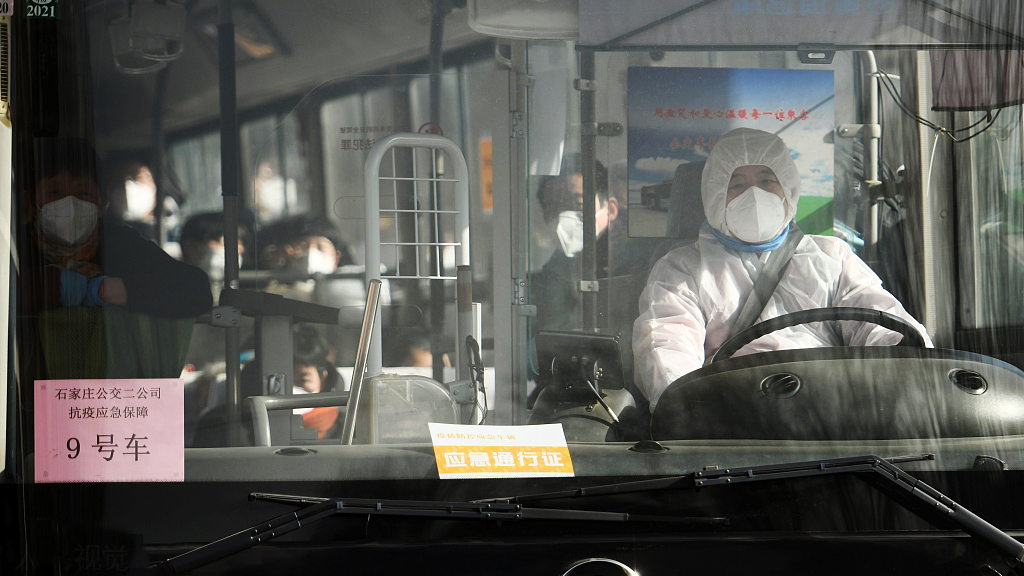 In light of a resurgence of COVID-19 cases, more than 20,000 villagers from 12 villages in Gaocheng District of Shijiangzhuang, capital of north China's Hebei Province, had been relocated to centralized quarantine sites as of Wednesday to contain the virus spread.

"In the district, a village may have dozens of families or hundreds of families. Only closing the entrance to a village cannot stop villagers from interacting with each other within a village, so it's better to relocate the villagers to a place to quarantine themselves," Tong Zhaohui, an expert with the National Health Commission, told China Media Group.

Tong added, at present, some villagers have not been infected with the virus, and the relocation-style quarantine aims to avoid new cases emerging from the interaction between the infected and uninfected.

"Home quarantines cannot achieve what a quarantine intends to reach, because it can easily cause family cluster cases," Meng Xianghong, deputy mayor of Shijiangzhuang City, was quoted by Xinhua News Agency as saying.

Since the COVID-19 patients in the city were mainly from several areas including Gaocheng District, local authorities decided to take an approach of centralized quarantine to curb the spread of the virus, especially within one family, Meng added.

As of Thursday, Hebei Province had reported 463 cases of local transmission and 195 asymptomatic cases. Turkey's health minister Fahrettin Koca received his first shot of the COVID-19 vaccine produced by China's Sinovac Biotech Ltd. on Wednesday, ahead of the country's mass vaccination program set to start on Thursday.

The nation has received three million doses of Sinovac's CoronaVac and ordered a total of 50 million doses. Russia's Sputnik V vaccine and the Pfizer/BioNTech vaccine is also under consideration.

Around 23,000 people died from the virus and more than two million are infected in the country.

A nurse dresses up to enter the intensive care unit of the COVID-19 department of the Policlinic of Tor Vergata in Rome. /AP

A nurse dresses up to enter the intensive care unit of the COVID-19 department of the Policlinic of Tor Vergata in Rome. /AP

The number of global COVID-19-related deaths is approaching the two million mark as the virus continues to devastate countries across the world.

With 10,495,147 infections, India has registered the world's second-highest virus load but which is less than half the tally recorded by the U.S.

A total of 18 countries have reported more than one million COVID-19 cases, most of which are in Europe.

U.S. vaccine rollout comes amid surge in cases and deaths 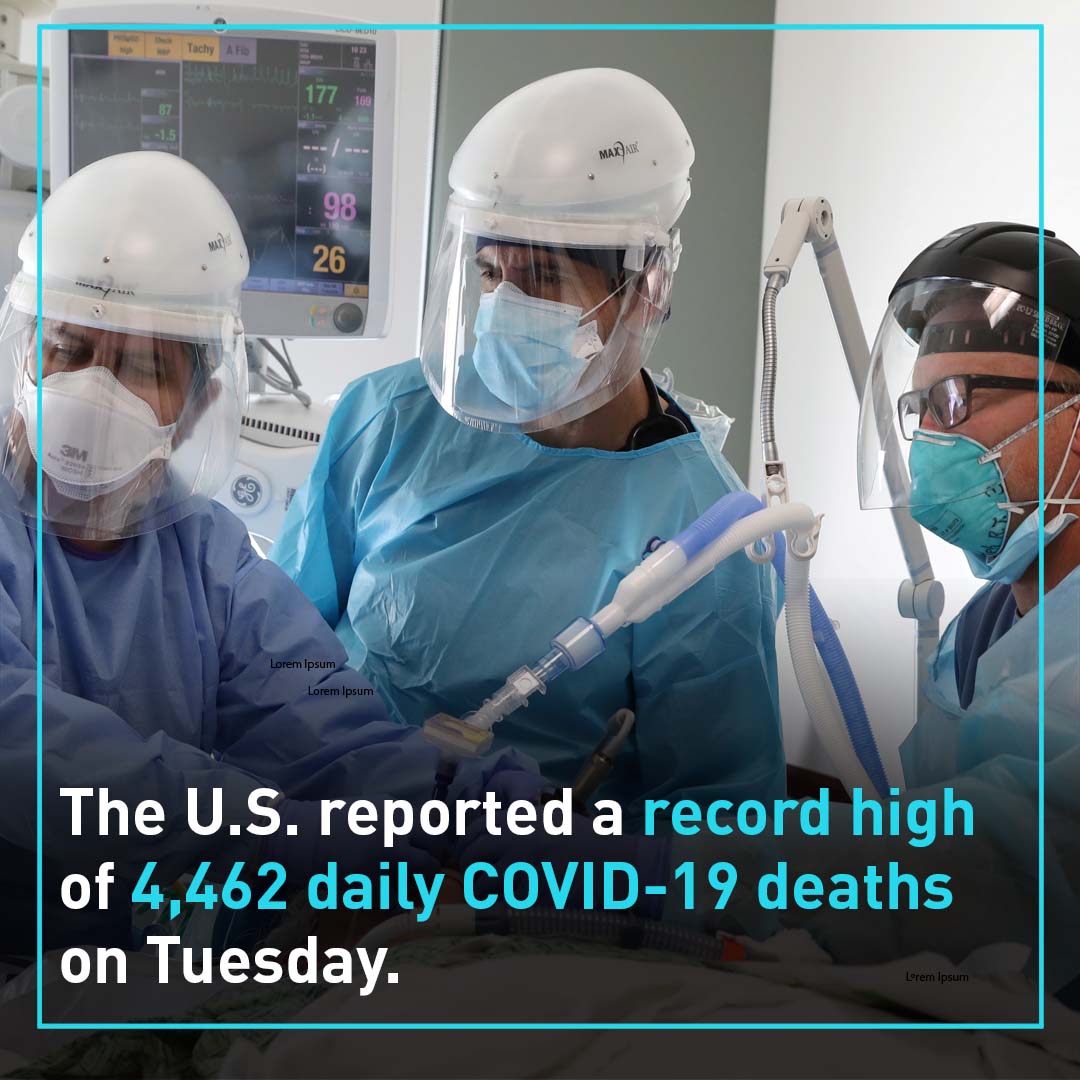 The global tally of confirmed COVID-19 cases now stands at more than 90 million. The U.S. leads all other nations with nearly 23 million infections. The country reported a record high of 4,462 daily COVID-19 deaths on Tuesday.

Over the past week, an average of more than 3,300 people have died every day, an increase of 217 percent over mid-November.

As positive cases continue to rise, U.S. Health and Human Services Secretary Alex Azar announced the federal government will no longer hold back second doses of COVID-19 vaccine and instead push states to get more older people their first doses.

The new plan recommends anyone 65 and older get the vaccine as soon as possible and offers federal help to states to expand testing.

Mexico reported 15,873 new confirmed coronavirus cases and 1,235 more fatalities on Wednesday, according to the health ministry, bringing its total to 1,571,901 infections and 136,917 deaths.

The real number of infected people and deaths is likely significantly higher than the official count, the ministry has said, due to little testing. 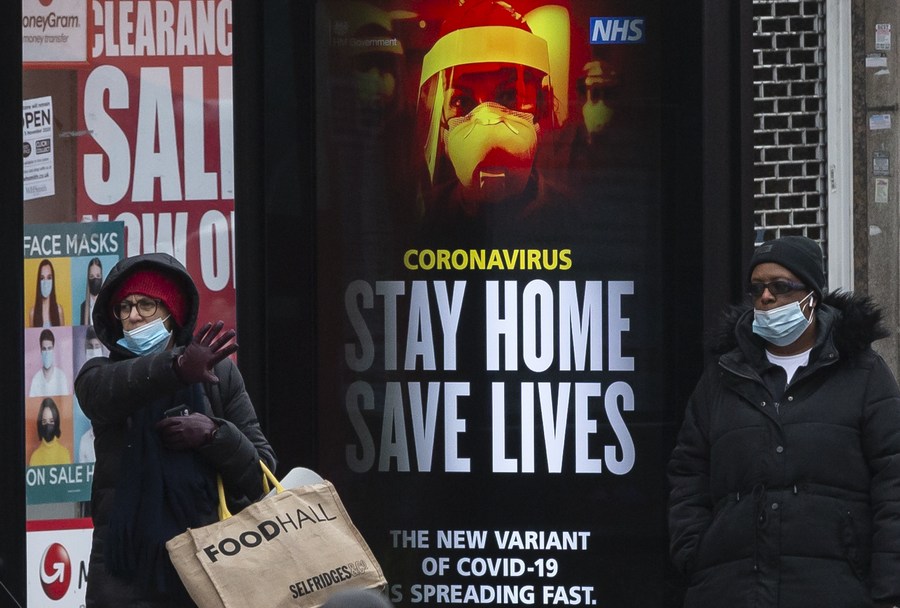 Passengers wearing face masks stand next to an advertising board reading "Stay Home Save Lives" at a bus stop in London, Britain, January 10, 2021. /Xinhua

Passengers wearing face masks stand next to an advertising board reading "Stay Home Save Lives" at a bus stop in London, Britain, January 10, 2021. /Xinhua

Britain on Wednesday recorded 1,564 deaths within 28 days of a positive coronavirus test, the highest daily death toll since the start of the pandemic in the country, according to official figures.

The previous highest daily rise of coronavirus-related deaths was 1,325, which reported on January 8, the data showed. The latest figure brings the total number of deaths in Britain to 84,767.

A new drug for treating COVID-19 symptoms, which could reduce the odds of coronavirus patients developing severe symptoms by 79 percent, is being moved to a mass trial in the UK.

German Chancellor Angela Merkel has warned citizens that life is likely to continue under lockdown until April due to the new virus variant, first discovered in the UK.

"If we don't manage to hold off this British variant, we will have a 10-fold incidence by Easter," Merkel told fellow Christian Democrats on Tuesday, reported Bild.

Health officials have seen no decline in COVID-19 infections in recent weeks despite stricter measures in place. More than 300,000 people are currently infected nationwide, including 19,600 new cases reported on Wednesday morning.

The African Union said on Wednesday it had secured 270 million doses of anti-COVID vaccines for the continent, in a deal that will benefit countries unable to finance their own immunization campaigns.

The news comes as coronavirus infections spike again in parts of Africa, especially South Africa, where a rapidly spreading variant of the coronavirus now makes up most of the new cases. The continent over the weekend surpassed three million confirmed cases since the start of the pandemic, with more than 1.2 million in South Africa.

Under the deal, the vaccines will be supplied by Pfizer, AstraZeneca and Johnson & Johnson.

African officials have approached at least 10 vaccine manufacturers and developers as the continent seeks to vaccinate 60 percent of its population of 1.3 billion people, or about 780 million people.