Download
What are generations of Chinese Communists striving for?
CGTN 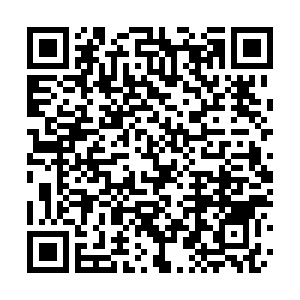 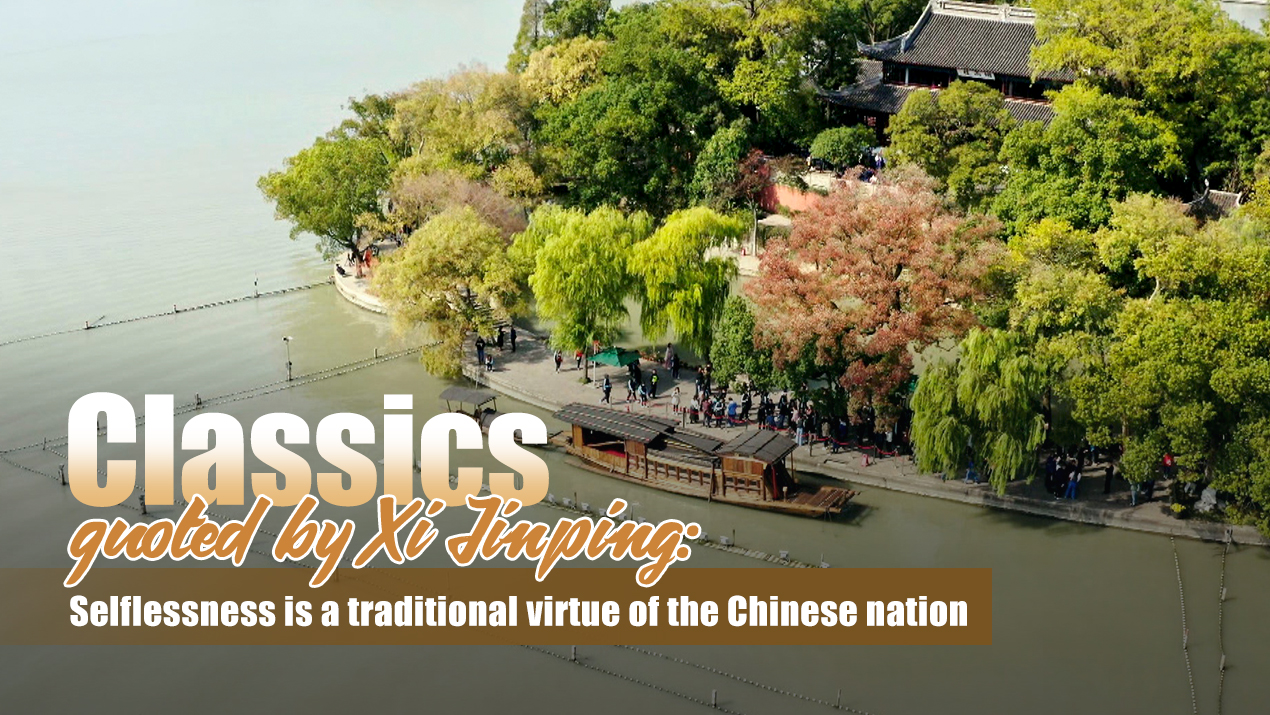 The Communist Party of China (CPC), the ruling party of the world's most populous nation and the second largest economy, is turning 100 this year. What has been motivating the CPC to fight against one challenge after another over the past century?

"The original aspiration and the mission of Chinese Communists is to seek happiness for the Chinese people and rejuvenation for the Chinese nation," General Secretary Xi Jinping of the CPC Central Committee said in his report to the 19th CPC National Congress in October 2017.

"This founding aspiration, this mission, is what inspires the Chinese Communists to advance," Xi said.

In March 2018, Xi, also the Chinese president, further explained the cause pursued by the CPC with a quote from an ancient poem: "A virtuous person is as sharp-sighted as a clear mirror hanging high, a selfless person is just like a lit candle giving all of its light to others."

A virtuous person is as sharp-sighted as a clear mirror hanging high, a selfless person is just like a lit candle giving all of its light to others.
-  "To Your Excellency Daxi" by Meng Jiao of the Tang Dynasty (618-907)

He made the quotation at a symposium to commemorate the 120th birthday of late Premier Zhou Enlai (1898-1976), who joined the CPC in 1921, the year when the Party was founded.

"The lofty character of comrade Zhou Enlai, who selflessly pursued a just cause for the common good throughout his life, vividly reflects the traditional virtue of the Chinese nation and good moral qualities of the Chinese Communists, and will forever earn the respect of future generations," said Xi.

The comments "not only aimed to remember the noble character of Zhou who was self-disciplined, upright, honest and selfless, but also to encourage today's Communists to stay true to their original aspirations of the Party and shoulder their responsibilities," said Meng Man, a history professor at Minzu University of China.

Classics quoted by Xi Jinping: Why do the people support the CPC?

The number of the CPC members has exceeded 90 million, and China has become a much stronger nation than 100 years ago and the early decades of the People's Republic of China, but the aspiration of the Chinese Communists remains unchanged. 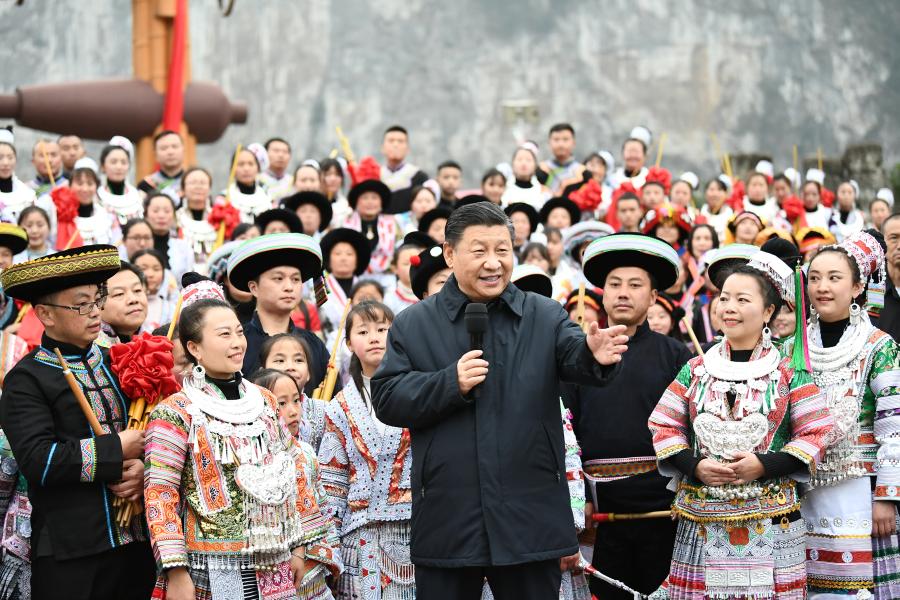 Chinese President Xi Jinping talks to villagers who are participating in festive activities and extends his New Year's greetings to people of all ethnic groups across the country during an inspection tour in Bijie, southwest China's Guizhou Province, February 3, 2021. /Xinhua

Chinese President Xi Jinping talks to villagers who are participating in festive activities and extends his New Year's greetings to people of all ethnic groups across the country during an inspection tour in Bijie, southwest China's Guizhou Province, February 3, 2021. /Xinhua

"To meet the people's desire for a happy life is our mission," Xi said when meeting the press after being elected as general secretary of the CPC Central Committee in November 2012.

Three years later, the communique of the fifth plenary session of the 18th CPC Central Committee underscored a people-centered development philosophy, stressing that China's development must be for the people and by the people, and its fruits shared among the people.

The notion was highlighted again in the CPC Central Committee's proposals for formulating the 14th Five-Year Plan (2021-2025) for National Economic and Social Development and the Long-Range Objectives Through the Year 2035, which called for efforts to promote common prosperity for everyone.

China, in recent years, has been striving to build a moderately prosperous society in all respects and pursuing more balanced development. The CPC members have played leading roles in a nationwide poverty alleviation campaign to make sure nobody is left behind.

Over the past eight years, more than three million public sector officials were sent from cities and towns to villages to fight against poverty on the front lines and over 1,800 people died during the fight, Xi said on Thursday after announcing the country's "complete victory" in eradicating absolute poverty. 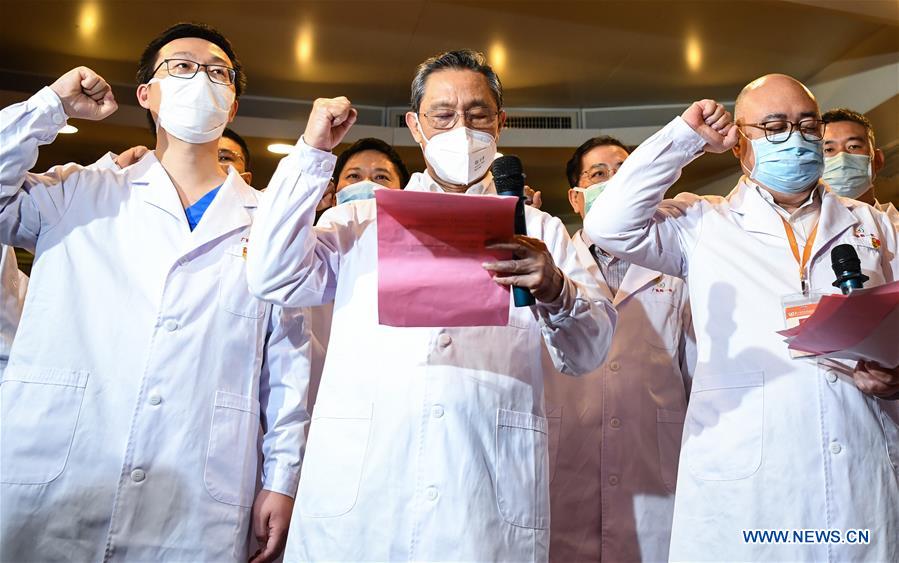 Putting people's life and health first, China has taken strict measures to battle the COVID-19 pandemic and effectively contained the virus, thanks to people from all walks of life for their efforts and sacrifices, particularly the CPC members.

More than 39 million CPC members fought the virus at the front line, and more than 13 million volunteered their services. Nearly 400 CPC members have defended others' lives and safety at the cost of their own.

Why Chinese military enjoys extensive support from the people

When many parts of the country grappled with severe floods last summer, the Organization Department of the CPC Central Committee issued a circular to call on primary-level CPC organizations and members to fully play their role in flood control and relief work, urging them to ensure the safety of people's lives and property.

As China embarks on a new journey to fully build a modern socialist country, today's Chinese Communists – putting the people's and the nation's interests above those of themselves – are gearing up to take on their responsibilities as the older generations did.