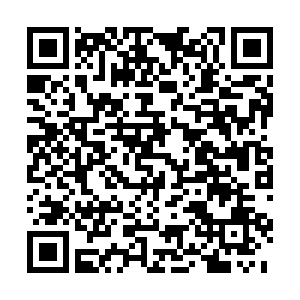 The experts of the World Health Organization released Tuesday a report on the origins of COVID-19, based on a joint research with Chinese experts during their Wuhan field visit, suggesting a possible role of intermediate host as the introduction pathway. The findings light the ways for future studies. 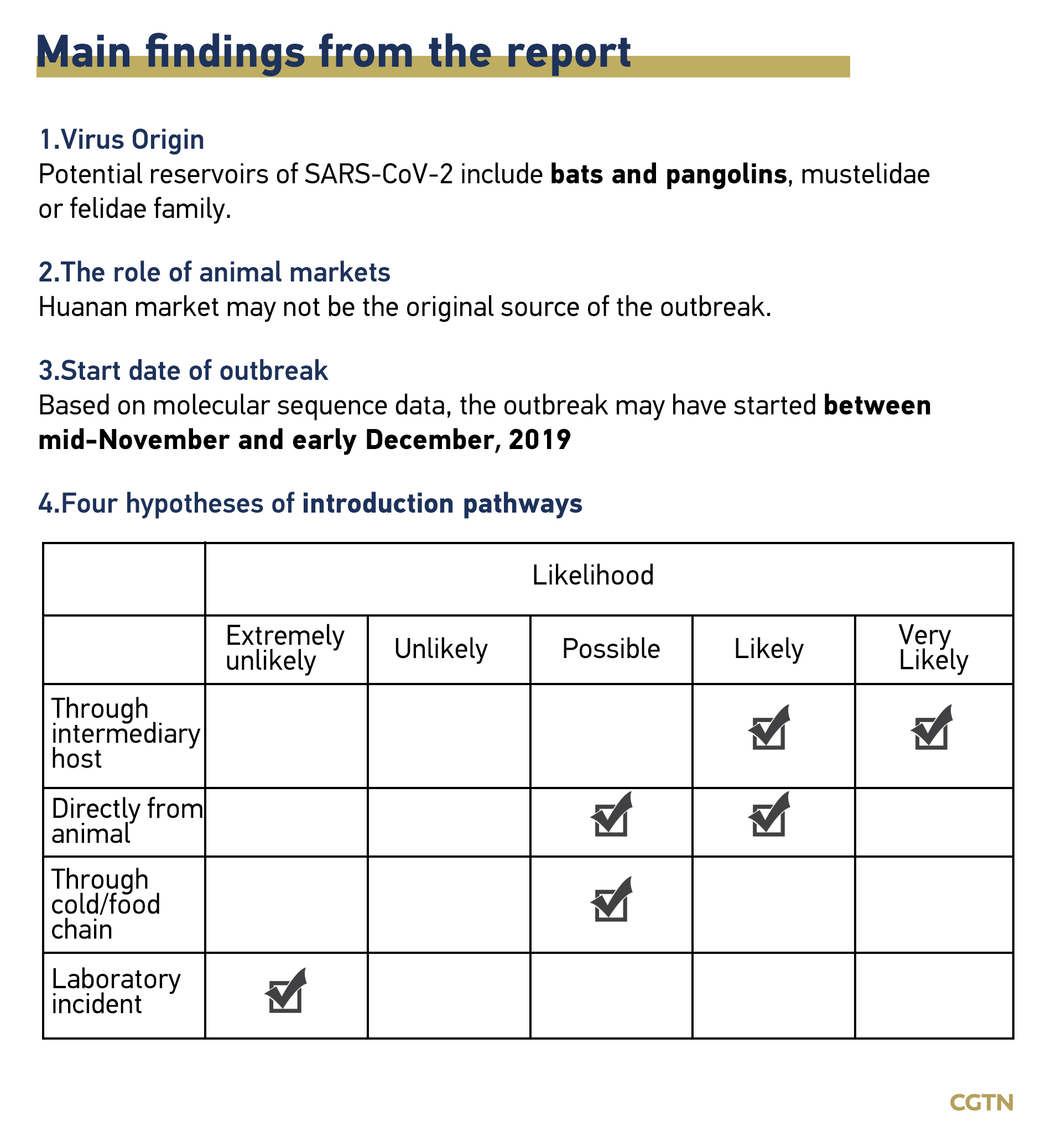 Here are some key questions addressed by the report.

When did the outbreak begin?

After examining surveillance data and cases in the two months of October and November before the outbreak at the end of 2019, the team considered it "unlikely that any substantial transmission of SARS-CoV-2 infection was occurring in Wuhan during those two months," the report says.

Also, the report suggested Huanan Seafood Market, which was once believed as the epicenter of the virus, may not be the original source of the outbreak, as many of the early cases were associated with other markets, together with the presence of the earlier cases not associated with Huanan market.

Based on molecular sequence data, the results suggested that the outbreak may have started between mid-November and early December.

The team also reviewed data from published studies from different countries suggesting earlier circulation of SARS-CoV-2 than the first case in Wuhan. The report says the quality of the studies is limited, and it is important to investigate these potential early events.

WHO expert: Future research on COVID-19 origin not limit to one region

Where is the virus from?

The joint international team comprised 17 Chinese and 17 international experts. The international team includes 10 experts from 10 different countries – Denmark, the UK, the Netherlands, Australia, Russia, Vietnam, Germany, the U.S., Qatar and Japan, five WHO experts, two World Organisation for Animal Health (OIE) representatives. In addition, two from the Food and Agriculture Organization of the United Nations (FAO) participated as an observer. 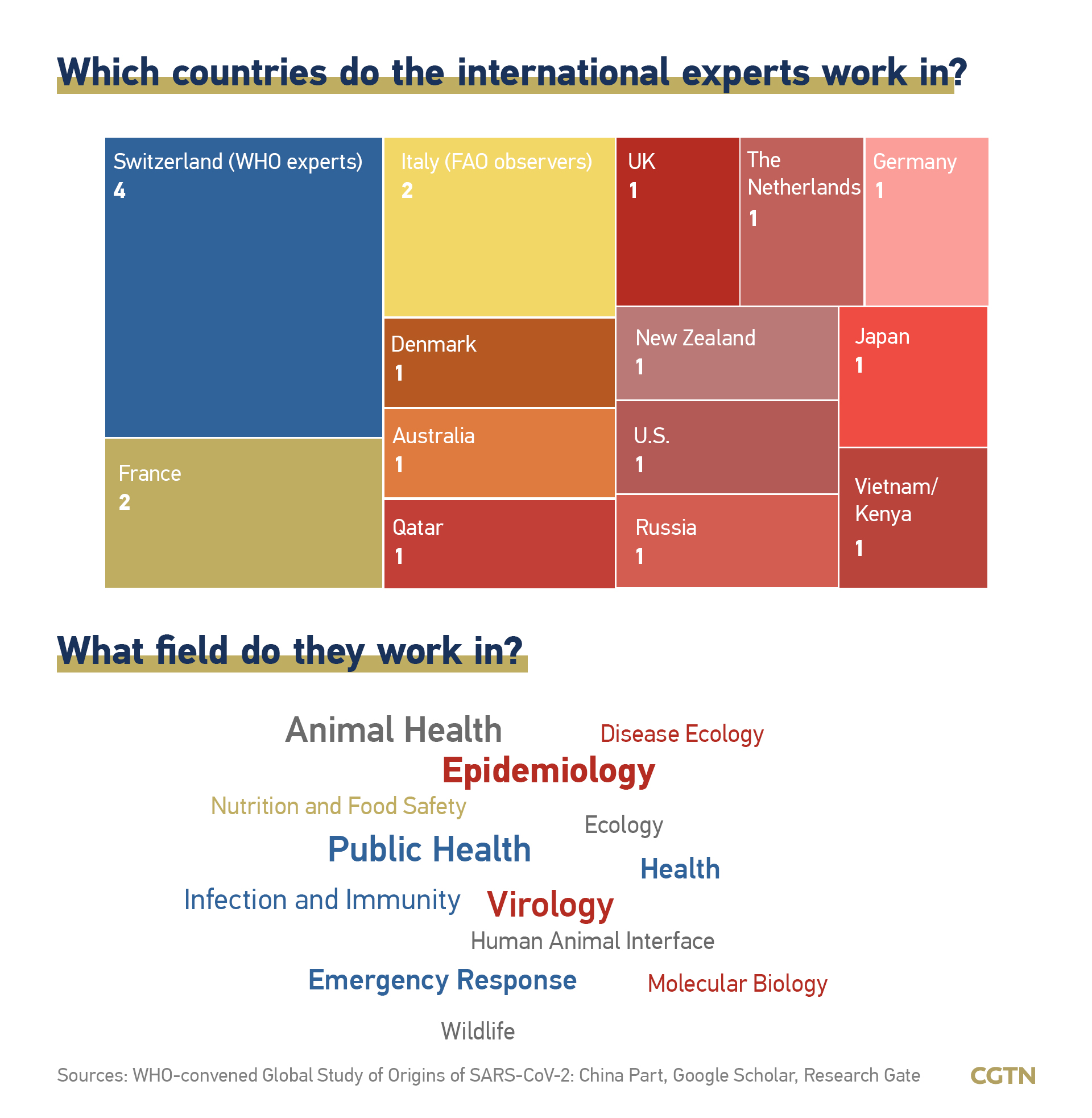 The joint study was conducted over a 28-day period from January 14 to February 10 in the city of Wuhan, central China's Hubei Province.

During their two-week quarantine, the international team worked with Chinese experts through video and teleconference calls, exchanging information and presentation.

After that, the international team conducted site visits to places related to the first cases, including hospitals, laboratories, the Huanan Market and its neighborhood, and interviews with traders and suppliers, the first patients, community leaders and journalists.

In early March, a group of 26 scientists signed an open letter questioning the independence, accessibility and multidisciplinary nature of the WHO's visit and called for a new probe into the origins of COVID-19. CGTN looks into the scientists to examine the credibility of the letter.

More than half of the signatories are not relevant to the field of virus tracing, working in the fields such as consumer finance, philosophy and business management. 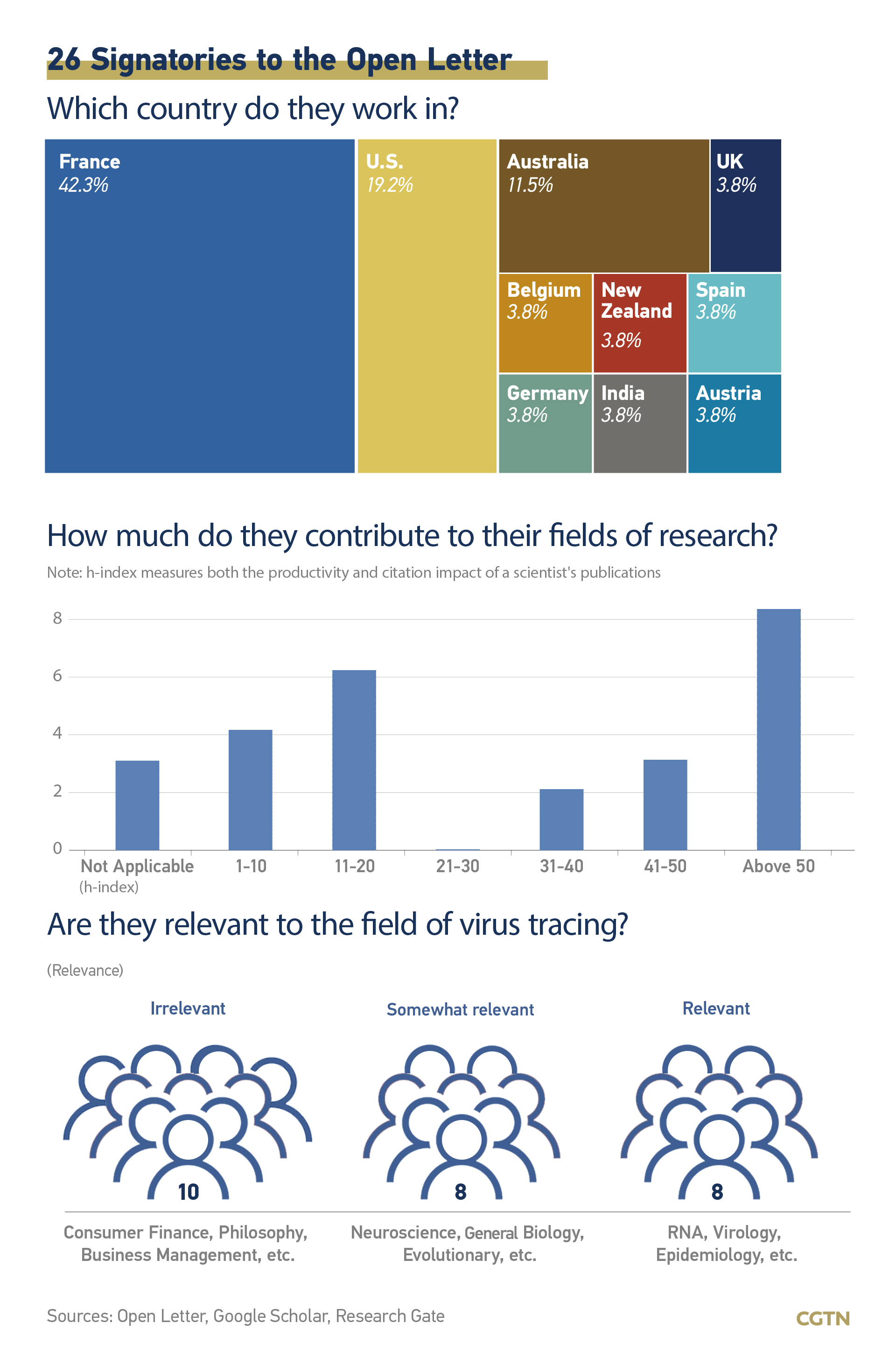 Jamie Metzl, one of the co-organizers of the group, was the former aide to then-Senator Joe Biden. Metzl also served the Clinton Administration in the National Security Council and State Department.

The group is overwhelmingly led by French scientists, as nearly half of the group are from the country. The rest of the group includes five members from the U.S. and three from Australia. The voice of Asian scientists is under-represented in the letter.

CGTN also examines the h-index, a metric that measures both the productivity and citation impact of a scientist's publications, of the signatories. Ten of the scientists have an h-index under 20. The value is equivalent to a typical associate professor.