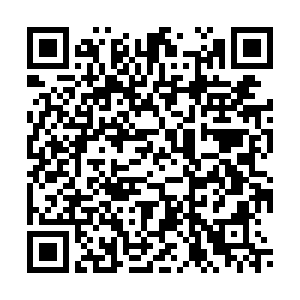 India is gasping for breath amid a raging second wave of COVID-19 pandemic as the plight of its healthcare system is compounded by a severe shortage of oxygen supply in hospitals nationwide.

In an atmosphere of despair, a civilian effort has gained steam over the past week and now shines as an example of human enterprise and resilience in the face of a massive disaster, giving hope to hospitals and patients in desperate need of pure oxygen.

Even before the government, stunned into slackness by the escalating pandemic mayhem, or an alarmed global community could respond to the unfolding catastrophe in India, a group of young entrepreneurs from the Democracy People Foundation (DPF) launched "Mission Oxygen" on April 23, with the single objective of procuring oxygen concentrators from Chinese manufacturers and deliver them to the hospitals in India.

"We started with an initial target of 500 oxygen concentrators when we launched the fundraiser on an online platform. We wanted to bring these as quickly as possible," Rahul Aggarwal, one of the DPF founders, told CGTN Digital in a video interview via Zoom. "But very quickly, we understood that we will need tens and tens of thousands of these for hospitals across India," he said.

DPF is a family charitable trust started by Aggarwal's grandfather that was engaged in smaller philanthropic activities in and around the national capital of New Delhi, he said. The scale of operation of the trust has dramatically expanded with Mission Oxygen. 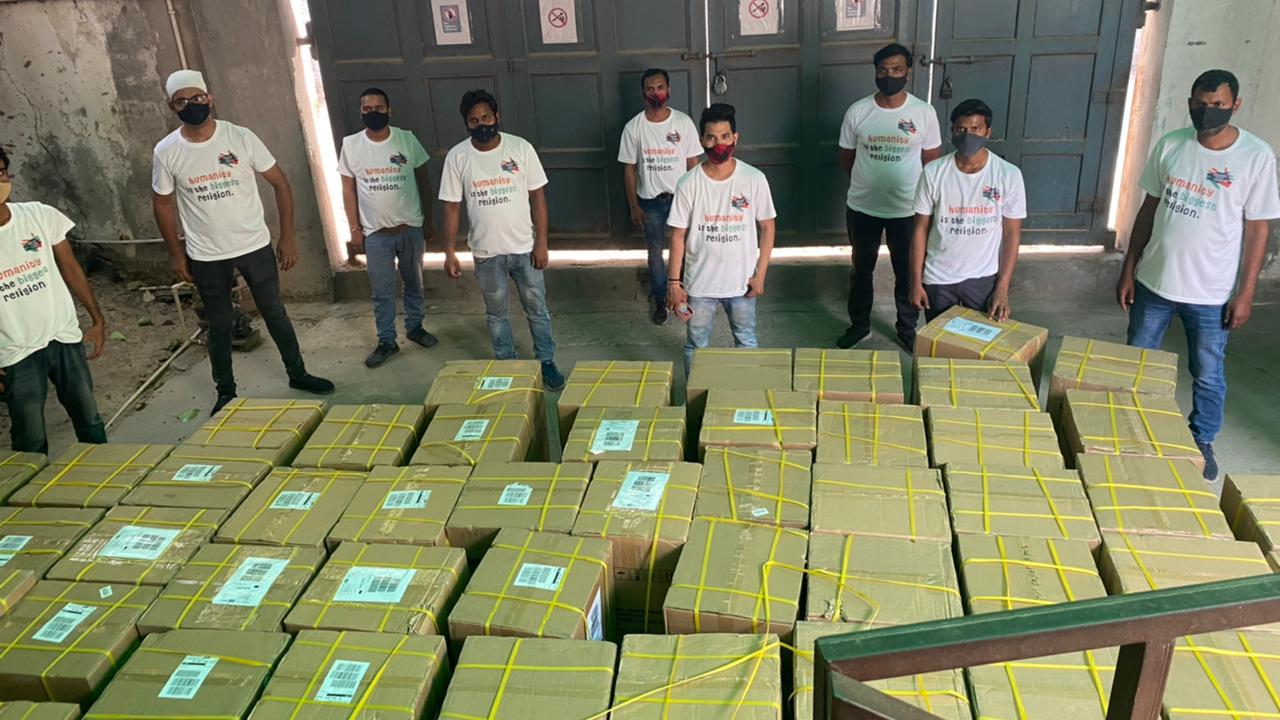 The first shipment of 100 devices from China for Mission Oxygen arrived in India on April 30, 2021. /Mission Oxygen

The first shipment of 100 devices from China for Mission Oxygen arrived in India on April 30, 2021. /Mission Oxygen

"That target from 500 has now gone up to 6,000 oxygen concentrators, for which we've already placed orders," Aggarwal said, adding that the first shipment of 100 devices from China arrived on Friday, exactly a week after the launch of the initiative. They were distributed to 14 hospitals. The remaining pieces will be delivered in phases from next week onwards.

Mission Oxygen has already raised over $3.6 million in crowdfunding as of Sunday and has set a target of $5 million in the next three days, according to its online fundraising page on Ketto.org. The page shows India's cricketing legend Sachin Tendulkar as the top donor for the initiative. Shikhar Dhawan is the current Indian cricketer on the list.

"Over the last seven days, we've had help from all over the world. Every place, every country, people of all kinds, races have come forward to help us … not a single person has said no to me," Aggarwal said.

"They're supporting us in this initiative because they see that our intent is clear. Our intention is to help people and nothing else. Nobody's making any money out of this," he said. 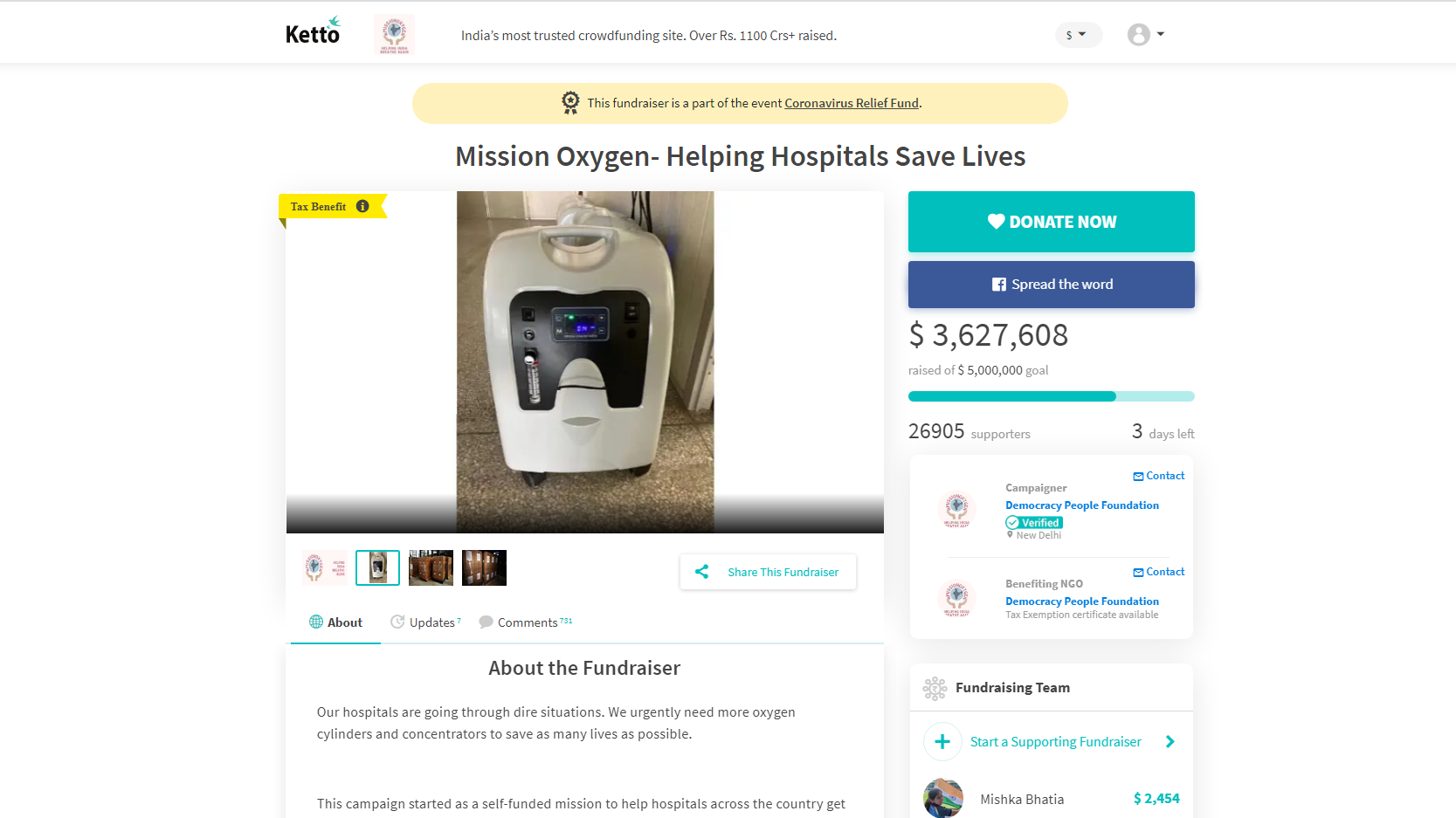 Mission Oxygen has mobilized a team of 250 entrepreneurs in India and about 50 people in China to cater to their daily operational and logistical needs. Many freight and logistics companies have also come forward to help the mission with the needs of transporting the devices to different parts of India.

"Currently, we have requirements from more than 270 hospitals. The requirements are coming in every day which we are adding to the list. We are setting up a committee, having doctors and professionals on board who will be helping us decide the allocations to these hospitals," the young entrepreneur said, explaining their distribution plan.

"We have a team who are on a daily basis in touch with these hospitals assessing their present requirements. The hospitals that need them the most are the ones that we're prioritizing," he said.

Aggarwal said while currently they are targeting only hospitals, they will reach out to NGOs and corporate India in the next phase.

"Right now, the primary focus is to get these oxygen concentrators to the hospitals, of all kinds – government, private, nursing homes, army hospitals," he said. "As the supplies start coming in, we'll start focusing more on NGOs, and even other initiatives that corporate India is taking."

He said many big companies are setting up emergency hospitals that will increase the demand for oxygen concentrators in times to come. 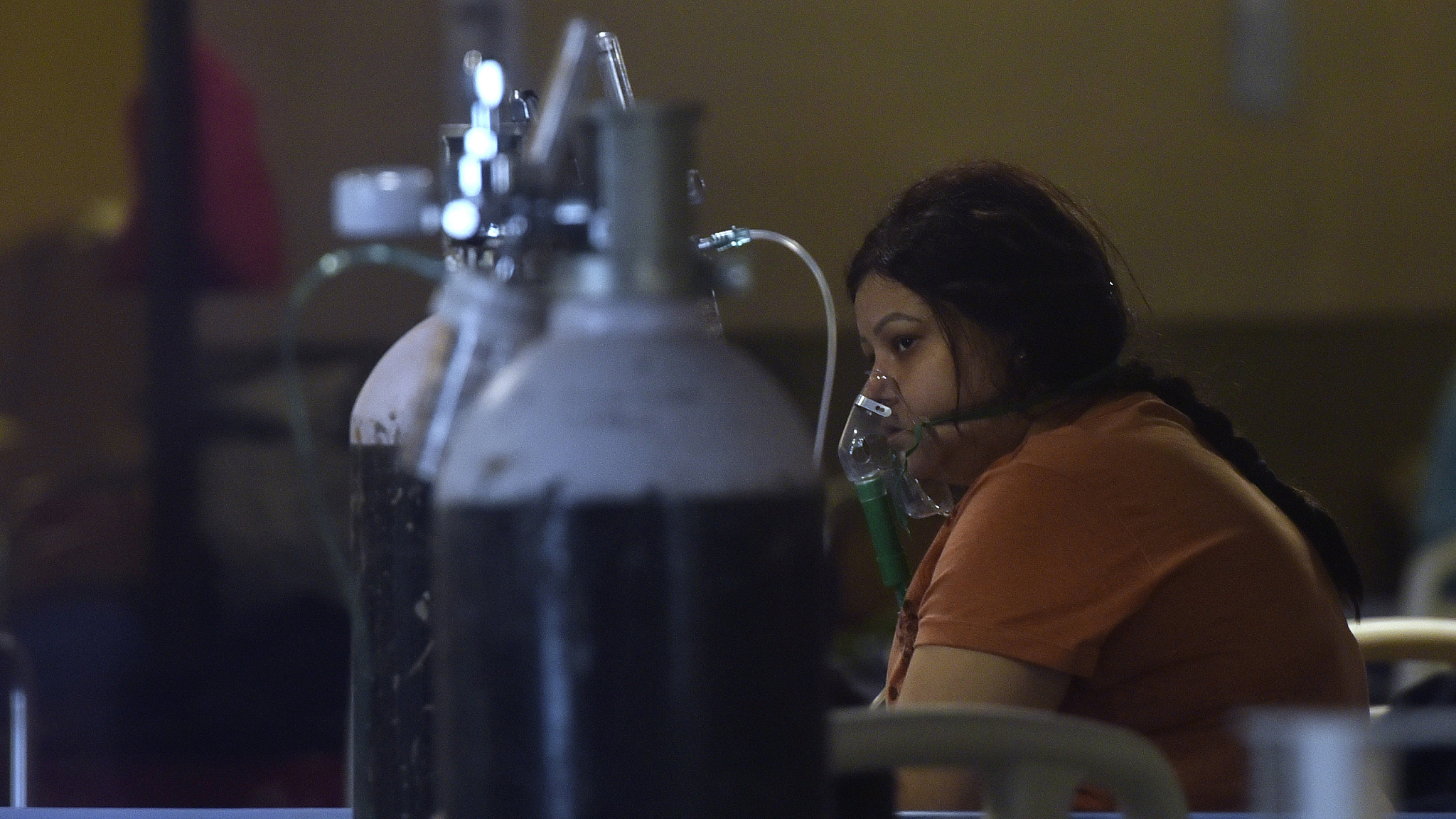 "Number one, obviously because China has the production facilities. We understand that the production capabilities of Chinese companies are pretty great in the sense that they can turn around rapidly and they can work 24X7 and produce a lot of quantities very quickly," he said.

"Number two, I have many friends who have been working out of China and who have offices spread across many cities in China. And they have people on the ground. I had their support and could also fall back on their logistics team. So, this was the quickest way to place orders to Chinese factories," he reasoned.

"Number three is pricing. At the end of the day, we are raising money and donating these machines. So, we need to get the maximum number of oxygen concentrators with the money we have. Had we gone to the U.S. or Israel or Germany, then probably we wouldn't have been able to get half the numbers that we are able to get in the same amount of money in China," he explained.

China was the most logical and the only place for Mission Oxygen, the entrepreneur said. 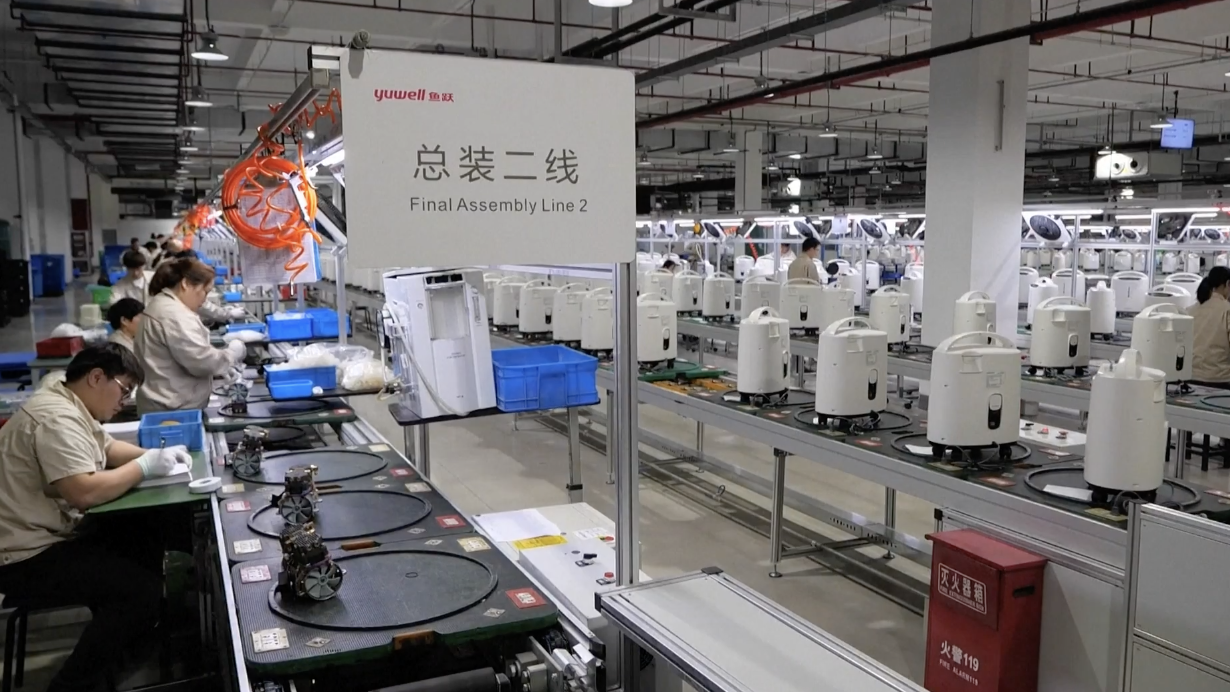 Aggarwal was all praise for the support the initiative has received from the Chinese people.

"The people who are working in our logistics in China have been working 24/7. They have been sleeping in factories, visiting warehouses at odd hours, flying from one city to another at the dead of the night, reaching at wee hours,"  he said. "They have been following the cargo all the way from the factories to the warehouses and at the airports."

"The kind of support that we're getting from the local Chinese people there is tremendous. They feel the pain that we as Indians are feeling today, the troubles that we are facing, and I think it's humanity at the end of the day," Aggarwal added.

"I don't think this is any longer a cause of India or China or any other country, it's a humanitarian cause now. And, one human is coming forward to help another human. I think that's what's happening right now. I have no complaints at all, in that respect."

Aggarwal called on authorities in both China and India to consider a priority customs clearance for emergency medical supplies, particularly if they are for non-profit and donation purposes.

"Specifically, these oxygen concentrators that are actually being brought in on a humanitarian ground and for the purpose of donation, if some kind of a green channel could be created, where the customs clearances are expedited, I think that would be the biggest help we can get," he said. "If our shipments and cargoes get priority clearance at Chinese airports, that will save time and eventually save lives. Time is of essence right now."

On Saturday, the Chinese Ambassador to India Sun Weidong tweeted that medical supplies to India are now getting such a service already. "We've provided convenience in customs clearance and transportation for India to transport medical supplies from cities in China. Will continue to ensure smooth functioning of export channel of materials to India," he said. 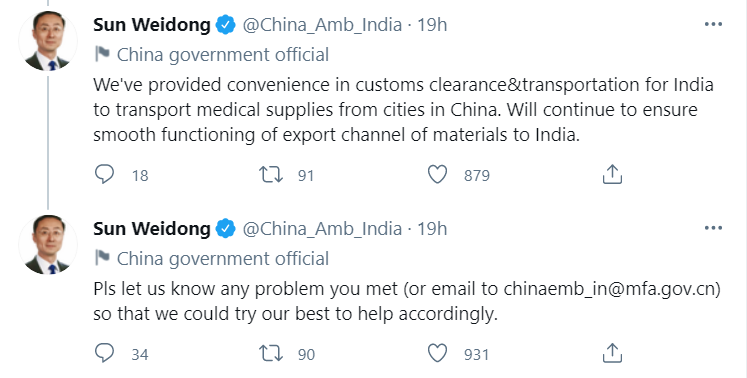 A screenshot of tweets from Chinese Ambassador to India Sun Weidong promising smooth functioning of export channel of medical supplies to India. /Twitter via @China_Amb_Ind

A screenshot of tweets from Chinese Ambassador to India Sun Weidong promising smooth functioning of export channel of medical supplies to India. /Twitter via @China_Amb_Ind

Read also: Over 40,000 oxygen generators are underway from China to India

In an interview with Global Times published Sunday, Sun said China hopes and believes that under the leadership of the Indian government, the local people can conquer the pandemic soon. In fact, China was one of the countries proposing help and support at the earliest stage and quickly took action, he said.

Since this April, China has supplied more than 5,000 ventilators, 21,569 oxygen generators, over 21 million masks and around 3,800 tonnes of medicine to India, Sun said earlier in a tweet on Thursday, citing the statistics of the General Administration of Customs of China.

"As far as I know, Chinese companies have been accelerating production of at least 40,000 oxygen generators – orders placed by the Indian side, and they are working around the clock to deliver them as soon as possible. Many Chinese firms and private organizations are also using their own channels to provide various [forms of] help to India," Sun said.

Why is India ill?