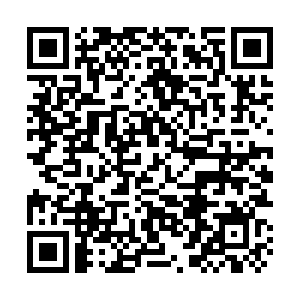 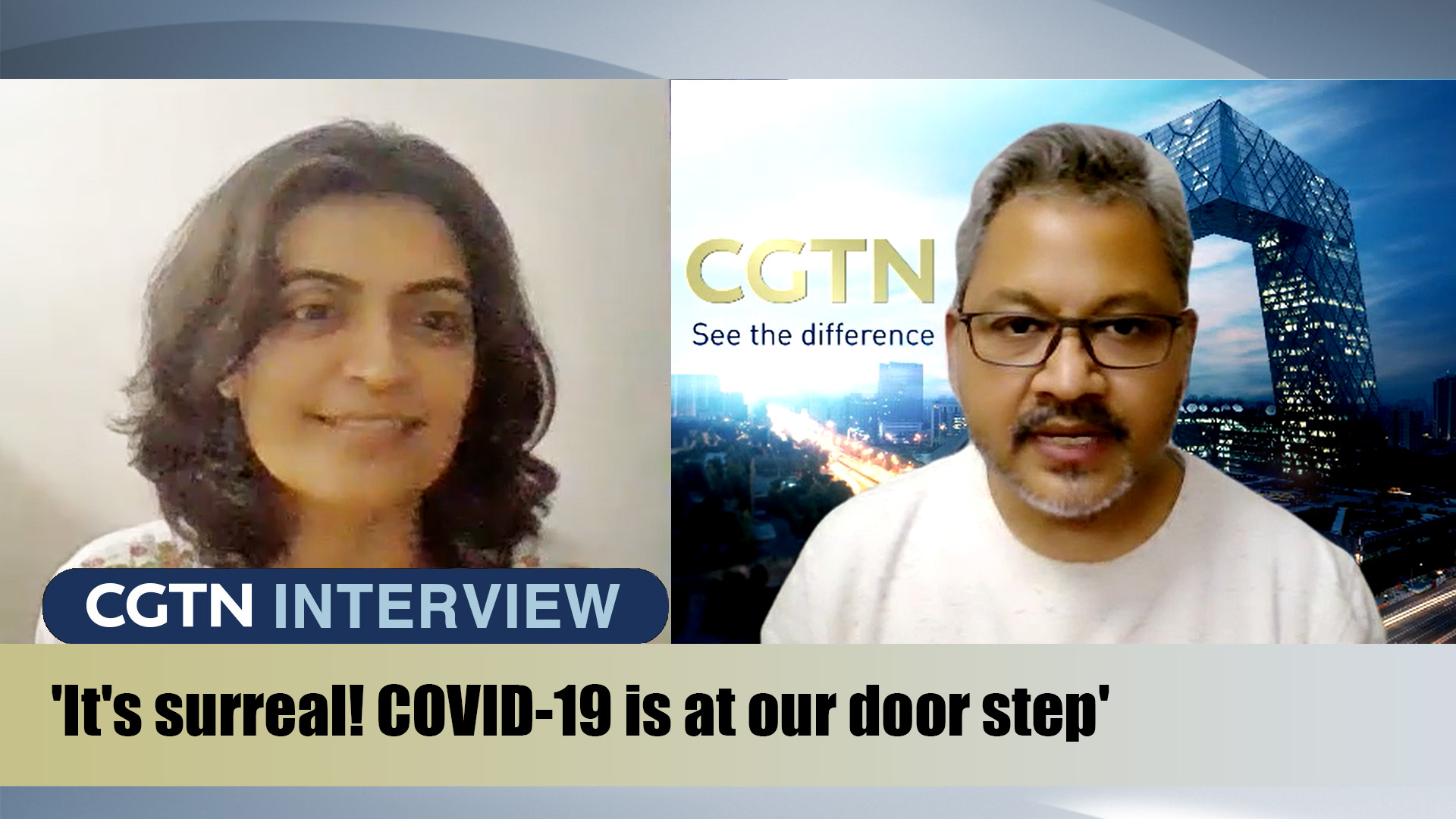 India's second wave of COVID-19, which began in March, has escalated rapidly, with daily cases exploding in the past week. It is now the world's worst coronavirus crisis, with more than a million new cases reported in just the past three days, and that's just the official number, which most experts think is an underestimation.

The numbers have predictably overwhelmed India's healthcare infrastructure the horrifying apocalyptic images of patients gasping for breath as hospitals run out of oxygen and other key supplies and of blazing funeral pyres with dead bodies piling up outside crammed up crematoria and graveyards have shocked the world.

"With the second wave, it is literally surreal. Till last year, even though the pandemic was across the world, in India, though we were still grappling with it, but it was not like it had come right to our door," Akanksha Bhanot, a resident of Noida in the National Capital Region (NCR), east of New Delhi, told CGTN Digital in a Zoom video interview.

"Now, it is just very scary, to be very honest. There are things that are seemingly spiraling out of control everywhere," added Bhanot, who is a teacher at the Pathways School India.

The report of acute shortages of supplies is not exaggerated, she noted. "Oxygen is an issue. Hospital beds are an issue. Even vaccines and the medicines now. People have started hoarding the medicines. You go to a chemist; you will not find basic medication."

A colossal collapse of systems 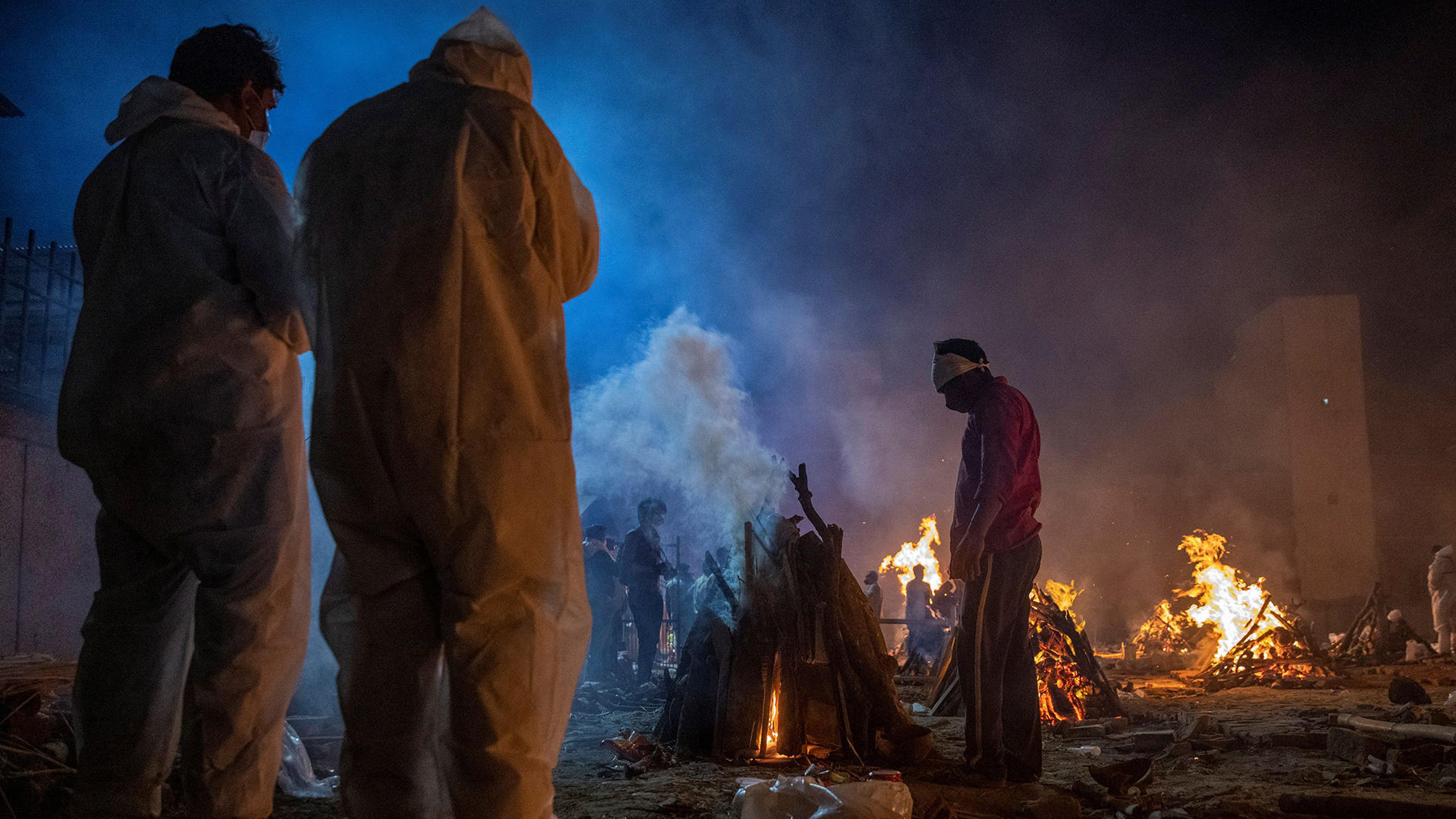 Several states in India, including the national capital territory of Delhi, are under total or partial lockdown, with people living under constant fear and despair as they struggle to fathom what has hit their lives.

"In Delhi NCR, the situation is pretty bad. I've personally had so many of my acquaintances, friends, even family members, who are down with COVID," Bhanot said.

"The worst part is, there seems to be a colossal collapse of systems - governance and civic both. It's a sense of this failure, which is weighing very heavily on people. It's like you are fending for yourself. The situation is very bleak," she lamented.

"Hospitals are literally chock-a-block. There are waiting lists for beds, whether it's the military base hospital or the other hospitals. People are scrambling for oxygen, basic necessities, which there was enough time for us to be prepared, when there was a lull in the cases in the past few months," she added.

Right through January and February, daily COVID-19 cases nationwide hovered in the range of 8,000 – 12,000 after hitting a peak of 96,000 last September. With the start of vaccination in mid-January, Indian Prime Minister Narendra Modi had literally, and in hindsight prematurely, declared a "victory" over the pandemic.

The pandemic protocols, in place since last year, were relaxed and India celebrated the festivals of Holi and Kumbh Mela that drew out millions as if COVID-19 has vanished. Political campaigns for elections in several states were permitted, with Modi himself addressing many rallies that attracted hundreds of thousands in the audience. All these political and religious events are now being seen as "super-spreaders" for India's devastating second wave.

Many are now blaming the government and other official agencies for complacence and lack of foresight. The Madras High Court has come down heavily on the Election Commission of India, observing that its official should probably be tried on murder charges for allowing political parties to hold massive election rallies without following COVID-19 regulations.

"It just feels like such a let-down from the government perspective, from the bodies that are supposed to take care of us, and it's very scary. There's a sense of shock. Of course, the trauma that is there, and anxiety levels are extremely high. The mental, physical balance is difficult right now, for all of us," said Bhanot.

Fear factor and sense of helplessness 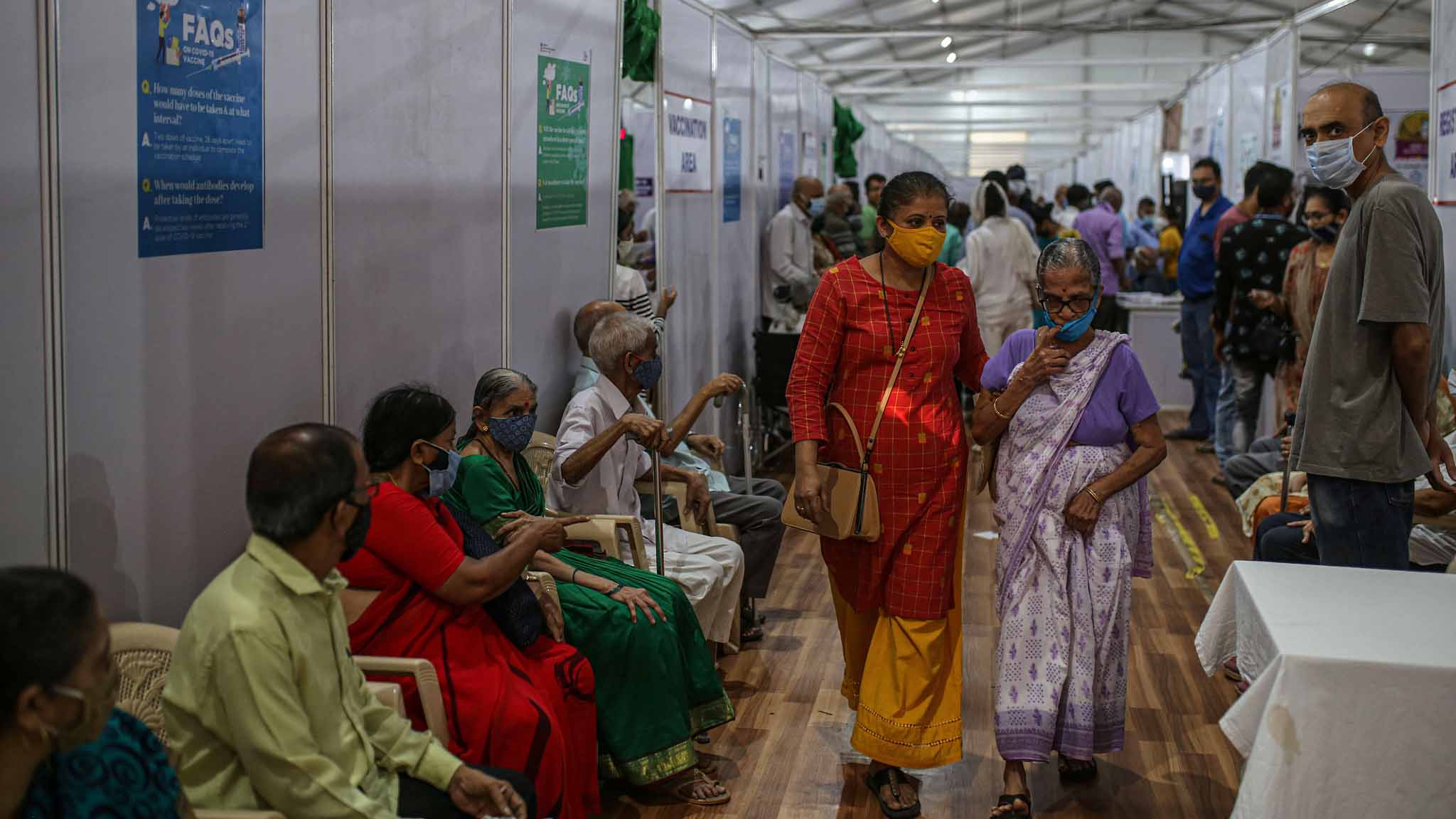 The lockdowns and curfews have put additional stress and aggravated the anxiety levels of people with a foreboding sense of helplessness and an overbearing feeling of being turned into a sitting duck.

"There's a sense of helplessness because you're stuck at home, and it's almost like you're just waiting for something bad to happen. That is the state of mind we are in. What's next, what's next?" Bhanot said.

So how are people coping up? The schoolteacher felt that it's more like a mind game now to test who's more resilient. "So, if you have that kind of a mental strength, of course, you can cope up better, but not everybody is cut off the same cloth. So, we have elders in our family, we have young children and there is a sense of despair that you don't know what is happening around you. You have no clue who and through whom you can get affected or infected."

Bhanot also spoke of the fear factor and paranoia that the situation has triggered among people. "Everyone's afraid of getting infected. First, you don't know how it's going to react with your body. Second, before this, people used to be like, okay, something happened, you have a system, you have hospitals to take care of you. Now, you are scared to even step out and move into a hospital… It is like walking into the pits of hell, because the situation is so bad in the hospitals."

"I don't know how those frontline workers are managing there, with their families, with the kind of workload that they probably must be facing. But mentally, it's exhausting. It's very exhausting, because you're living in fear. You're living in a very, very uncertain time period wherein you don't know what may happen. And that is probably more killing," she remarked. 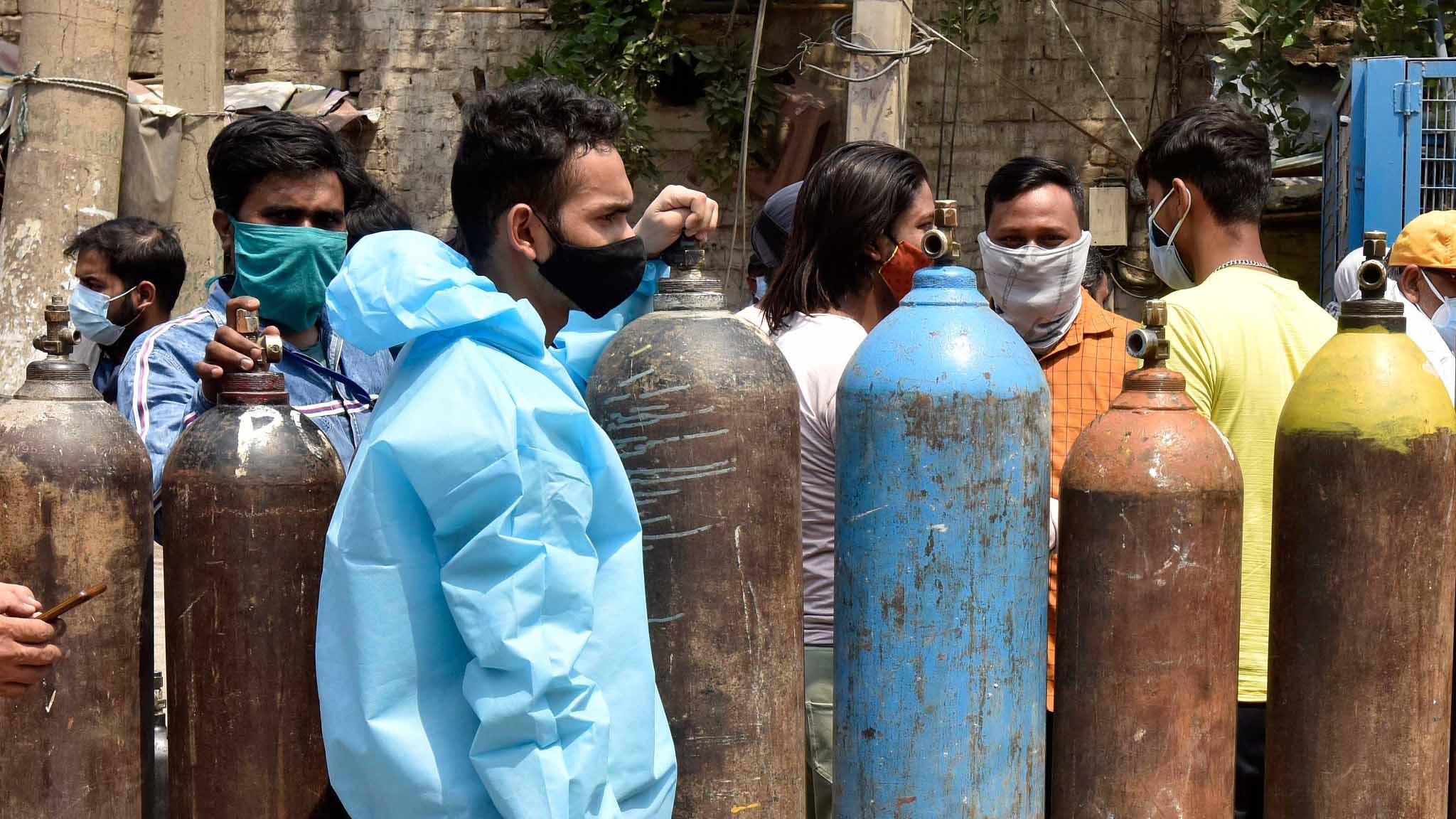 Amid all the gloom, there are also some positive stories of enterprising human spirit coming out of India. There are reports of many civil groups coming forward to lend a helping hand in procuring and delivering oxygen concentrators and other relevant supplies from international markets and delivering it to the hospitals. Likewise, a number of religious bodies, temples, mosques, and churches have set up fully-equipped COVID-19 care centers to meet the growing demands.

"A lot is being done at the community level. Specifically, the gurdwaras (Sikh temples) have stepped up things brilliantly. They've always been a very organized mechanism with their sense of sewa (service) and with their sense of community help. I would like to say a big thank you to them," said Bhanot.

While she praised such voluntary efforts by different sections of the society, Bhanot was also quick to point out that these actions can't be a substitute for the lack or a collapse of official capacities.

"I've seen real time instances where people have even let go of the profit margins, say by offering free oxygen refilling, delivering home-cooked food, etc. So, everybody is kind of looking out for each other. It no doubt gives a sense of comfort but considering the scale of the calamity, I don't think that is enough. What should have been done by the system, by the government, is being taken up by the civil society," she noted.

Many experts now believe that an aggressive vaccination campaign that covers a large section of the Indian population in the shortest possible time is the key to containing the pandemic.

India rolled out its COVID-19 vaccination drive on January 16, initially for frontline workers and the later phases included people over the age of 60 and 45, respectively. From May 1, everyone above the age of 18 will be eligible for vaccination, but reports of vaccine shortages are already causing concerns about the plan, which is an irony considering India's status as the world's largest vaccine producer. 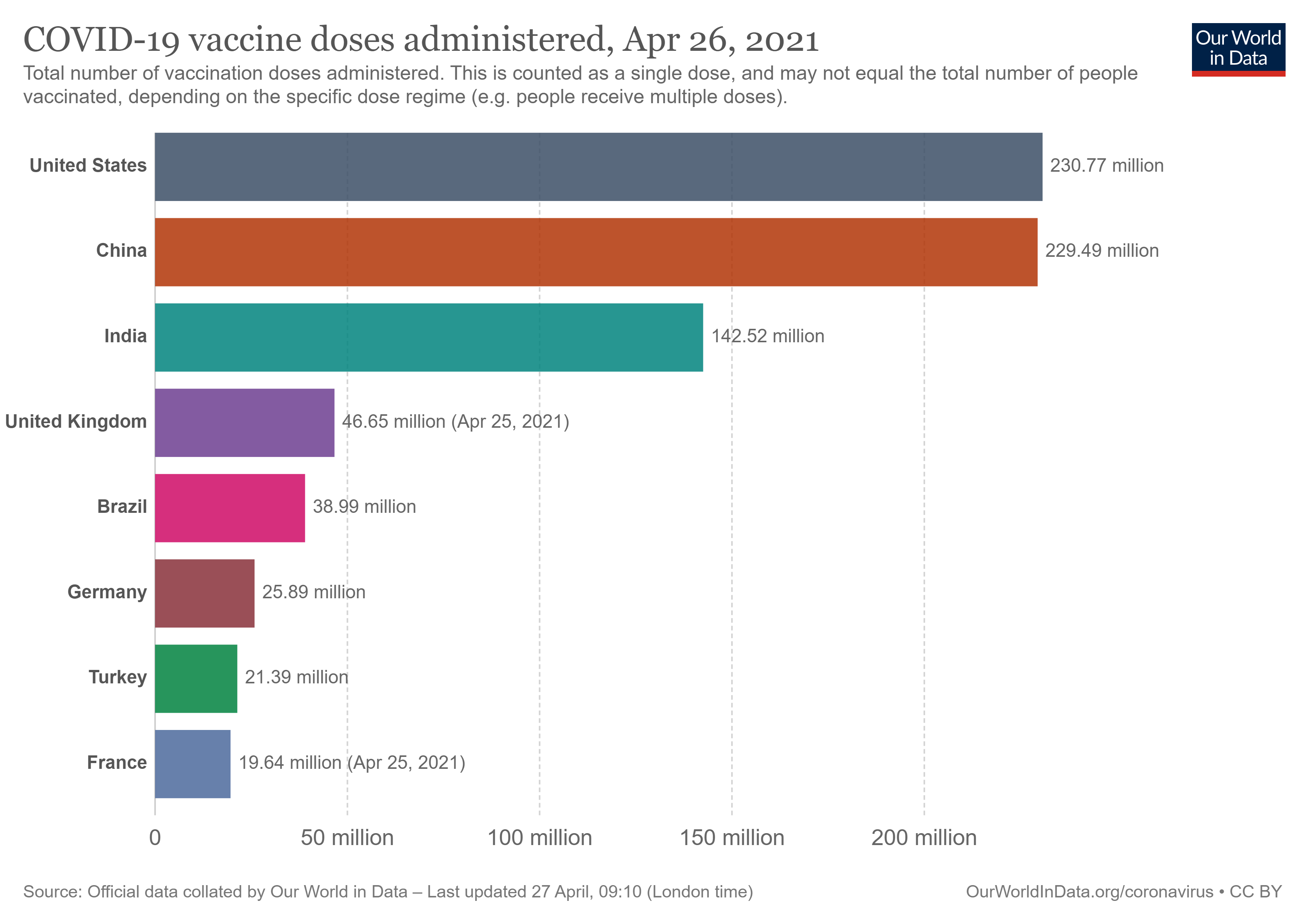 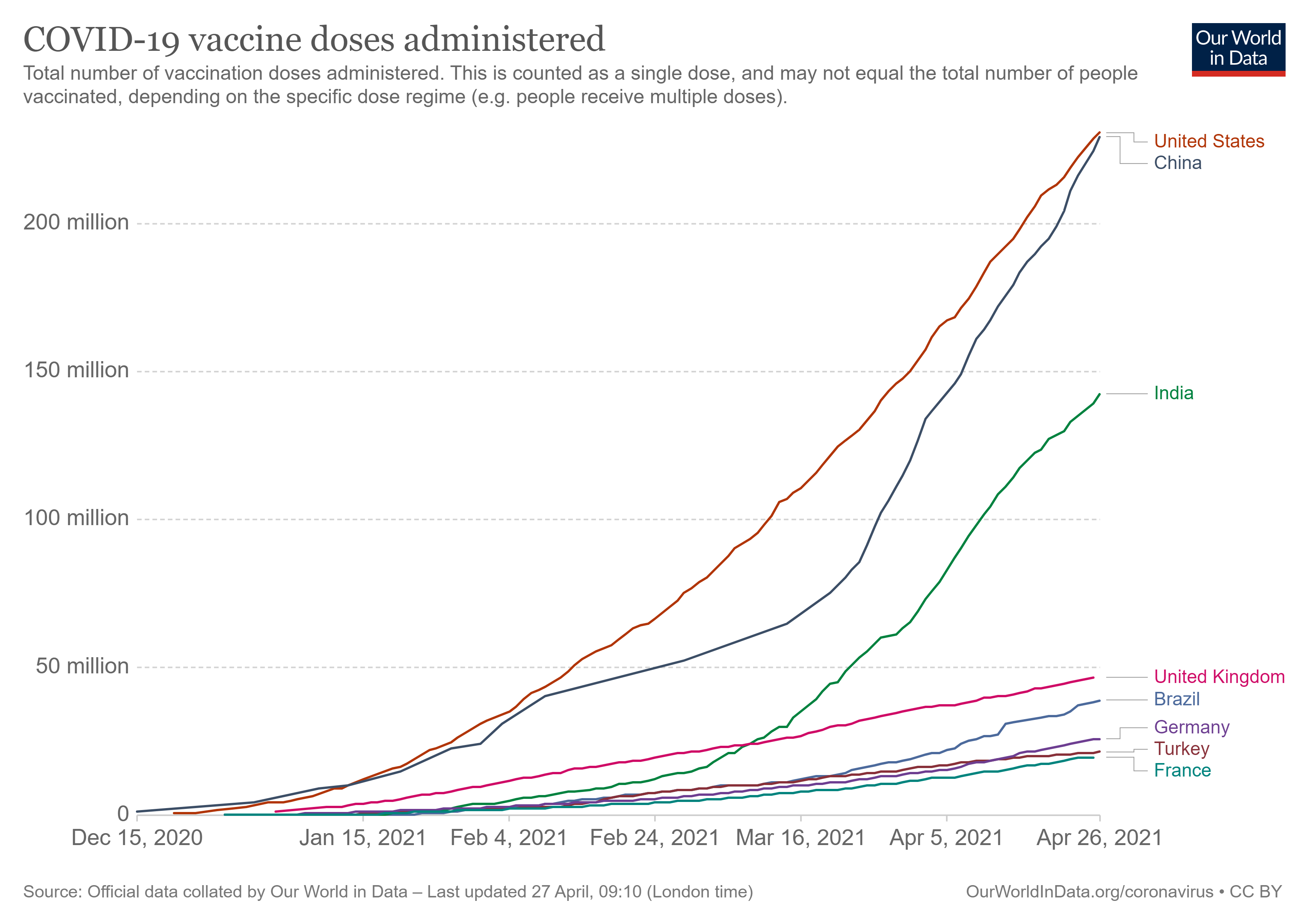 "I am not sure if we have enough doses. Vaccines are almost on the black market right now. People are paying 10,000 rupees ($134 approx.) for a vaccine. My friends have been turned away from hospitals as vaccines weren't available," Bhanot said.

She felt that the initial U.S. hesitance to relax the export ban on raw materials that directly impacted India's vaccine production left a bad taste even though she understood the U.S. government's logic stemming out of its desire to save Americans first.

"It kind of leaves a bad taste in the mouth, because, India has been a traditional ally [of the U.S.], right. And help is pouring in from countries like Pakistan and China, which are traditionally not on the friendship radar of India. So this is where we need to really stitch and chart out our priorities, and maybe relook at the relationship which we've had with a lot of countries," said the teacher with an avid interest in foreign relations.

After facing a massive outrage and criticism, Washington on Monday rolled out a series of supportive measures, including diverting vaccine raw materials to Serum Institute of India, and rushing oxygen-generating systems and other supplies to India. 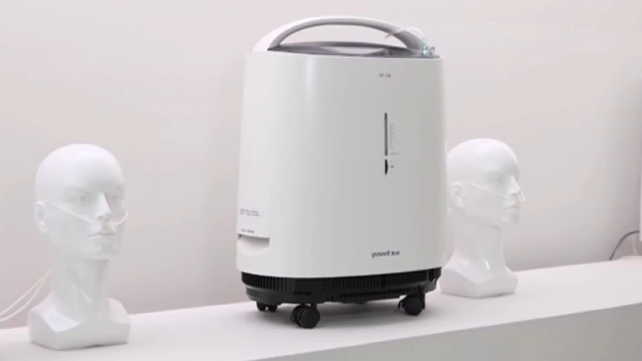 An oxygen concentrator displayed at the factory of Yuwell Medical Equipment Zhenjiang, Jiangsu Province. The factory is busy fulfilling orders from India. /CGTN

An oxygen concentrator displayed at the factory of Yuwell Medical Equipment Zhenjiang, Jiangsu Province. The factory is busy fulfilling orders from India. /CGTN

Meanwhile, China has repeatedly offered assistance to India for its current state of the outbreak. On Tuesday, Chinese State Councilor and Foreign Minister Wang Yi offered vaccines to South Asian countries, including India, while reiterating that Beijing was "ready to provide support and assistance" to New Delhi.

Bhanot welcomed China's gesture saying things between the two neighbors should always be worked out through friendship despite the recent tensions due to last summer's border clashes. "There are a lot more avenues of friendship, of partnership and collaboration that we need to look at within our region. And you have China, which has probably been successful in stemming the flow of the coronavirus pandemic. It doesn't hurt to kind of now revisit or relook at your neighbors and try to have another perspective on how you want your foreign relations going forward."

Bhanot felt that it is preferable to have an alliance with immediate neighbors on a strong footing and understanding, rather than looking at forces, which are different culturally, geopolitically, and geophysically. "From a global-local perspective, we need to look more towards each other, as, probably sources of sustenance and sources of help when we really need it."

"India and China have coexisted peacefully in ancient times, why can we not do that now?" she remarked.