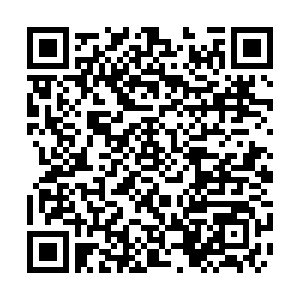 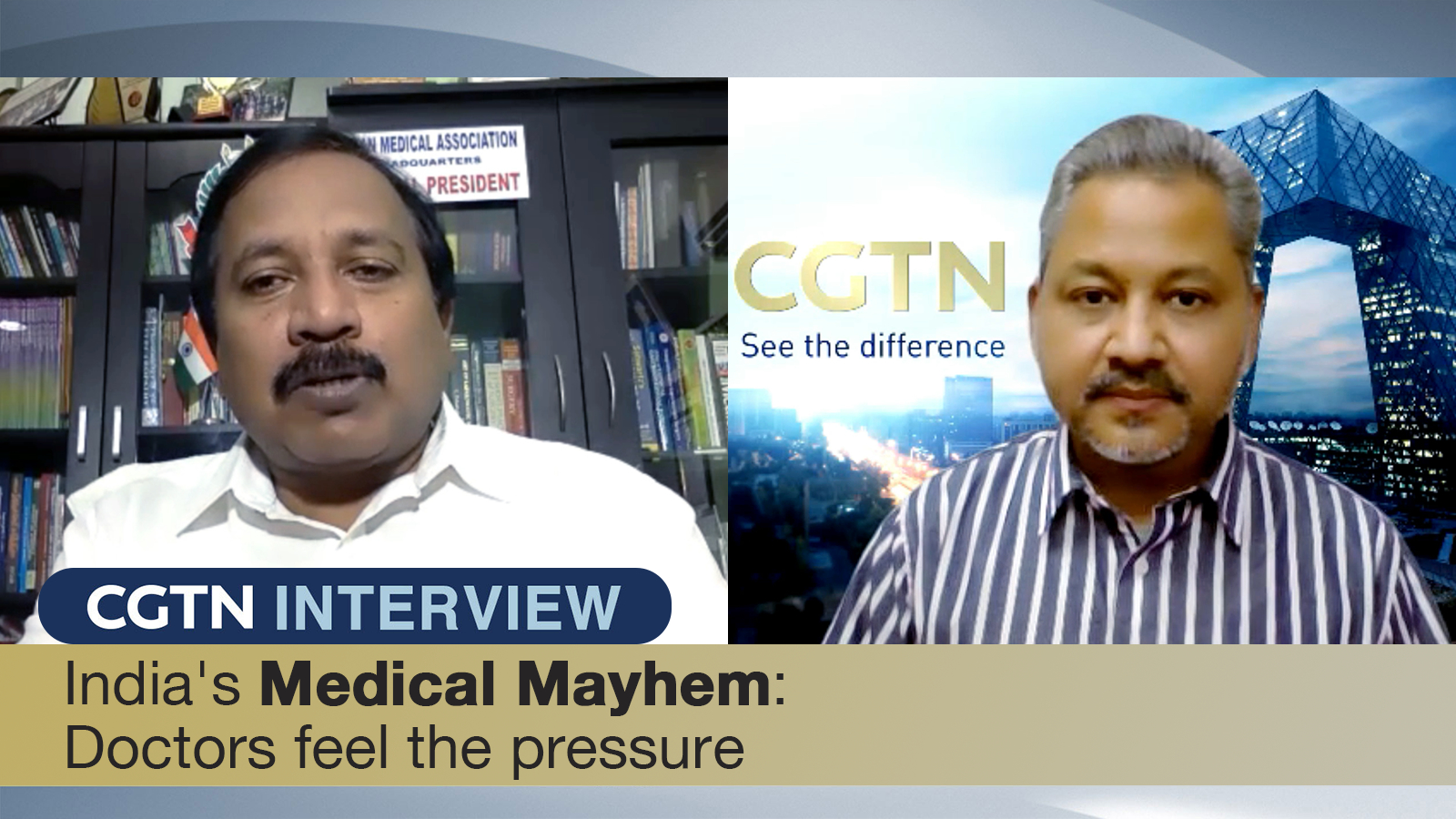 Dr Vivek Rai, a 35-year-old resident doctor at Max Hospital Saket in India's capital New Delhi, committed suicide last Friday purportedly because he couldn't deal with the helplessness of not being able to save COVID-19 patients due to the lack of oxygen and vital medical supplies.

A day later, Dr R. K. Himthani, the 62-year-old head of the gastroenterology department at Delhi's Batra Hospital, died in his own hospital as it ran out of oxygen supply.

These shocking incidents are merely a tip of the unfolding tragedy that has hit doctors and medical workers in India, who as frontline workers are facing the full brunt of the catastrophic second wave of the COVID-19 pandemic.

Over the past few weeks, hospitals have seen a dramatic explosion in caseloads that has led to a massive shortage of beds, medicines and oxygen, putting doctors and healthcare workers under tremendous pressure and heightened risk.

Over 860 medics have died since the beginning of the pandemic, with 116 losing their lives in less than a month during the ongoing second wave, Dr J. A. Jayalal, national president of the Indian Medical Association (IMA) told CGTN Digital in a video interview via Zoom from New Delhi.

"It is one of the most difficult situations, not only for the patients but for doctors too. We are under constant fear whether the next patient will get oxygen," he said.

"I work in a medical college hospital. There are 100 people in the ward of which 60-70 people need oxygen but we only have enough oxygen for 40-50 people. As doctors, we are forced to make a choice on which patient shall get it and which won't. There are ethical issues that we have to deal with every day," he added.

'They are breaking down mentally' 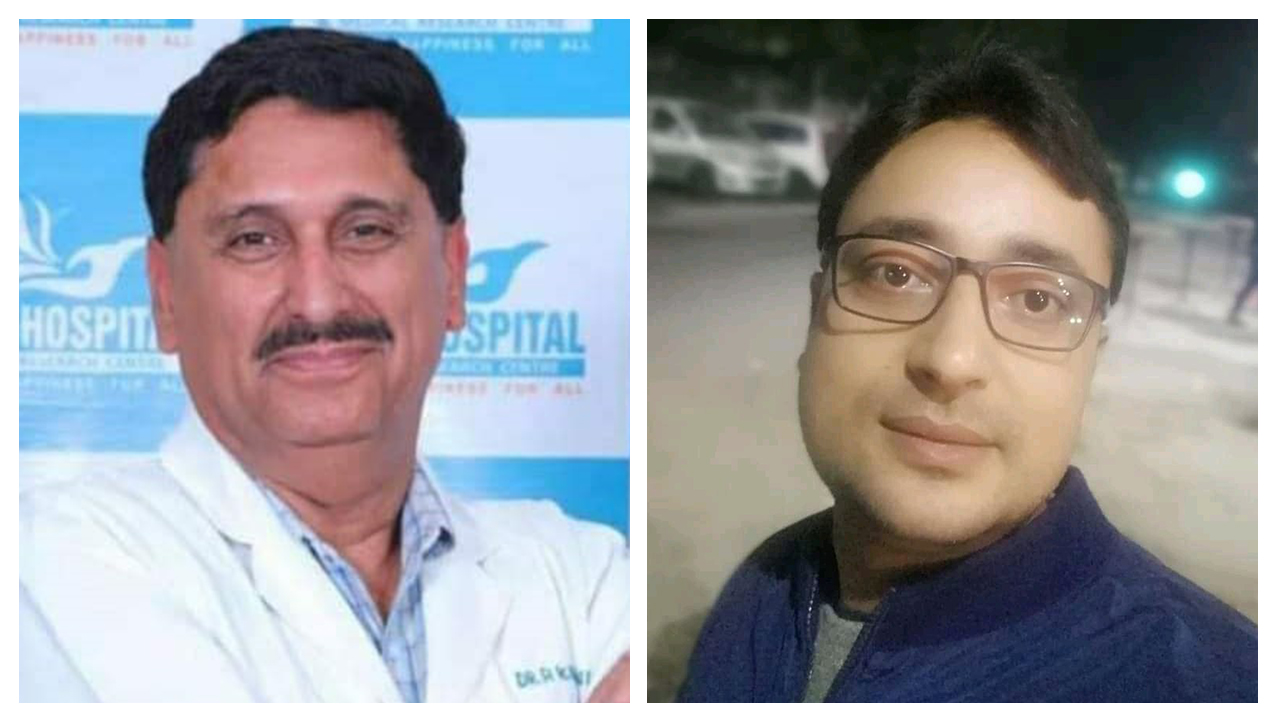 Dr R. K. Himthani (L), the head of the gastroenterology department at Delhi's Batra Hospital died in his own hospital as it ran out of oxygen supply. Dr Vivek Rai (R), a resident doctor at Max Hospital Saket in Delhi, committed suicide purportedly because he couldn't deal with the helplessness of not being able to save COVID-19 patients due to the lack of oxygen and vital medical supplies. /Twitter photos

Dr R. K. Himthani (L), the head of the gastroenterology department at Delhi's Batra Hospital died in his own hospital as it ran out of oxygen supply. Dr Vivek Rai (R), a resident doctor at Max Hospital Saket in Delhi, committed suicide purportedly because he couldn't deal with the helplessness of not being able to save COVID-19 patients due to the lack of oxygen and vital medical supplies. /Twitter photos

It's a war... a doctor proclaims as India stares into COVID-19 horror

Jayalal said that the mounting deaths due to the shortages are "intolerable for a doctor, but especially for young junior doctors."

"They are breaking down mentally. They have sufficient knowledge and skills and even if they have sufficient material, they don't have oxygen or even a bed. This is a shattering feeling. And if you see another doctor working in the same hospital dying due to the lack of oxygen, it will be difficult for the doctors and other staff to overcome the tragedy in their lifetime," he remarked.

In the absence of adequate safety measures and scarce quarantine facilities, 50 percent of the junior doctors are already infected, Jayalal said while urging the government to make immediate provisions.

"The government should come out very positively to support these doctors and augment the manpower. If it is not done urgently, there's going to be a big challenge for us," he added.

The IMA, which was founded in 1928 with an aim to look after the interest of doctors and the larger medical fraternity, has initiated a helpline to address the mental and emotional pressures of the fraternity.

"Any doctor or healthcare professional can directly reach out to us with any issues they are facing. We have a team working for the emotional well-being and mental health of the doctors. They are also conducting weekly programs to talk with those in need and encourage them," said the IMA chief.

The association has also created a task force of doctors to address to the needs of COVID-19-infected fellow healthcare workers.

"If somebody is infected and they are in trouble, we are visiting them physically to help them. So, we are lending our ears to listen to the various issues raised by the medical community and taking it to the government. The government is also responding to some of the issues," Jayalal said.

"At least, the doctors know for sure that somebody is there to take care of them, somebody is to support their family… that is only one area we are working on systematically. Our COVID helpline is really doing a miraculous job in providing help to the doctors," he claimed.

'We were overconfident, we let our guards down' 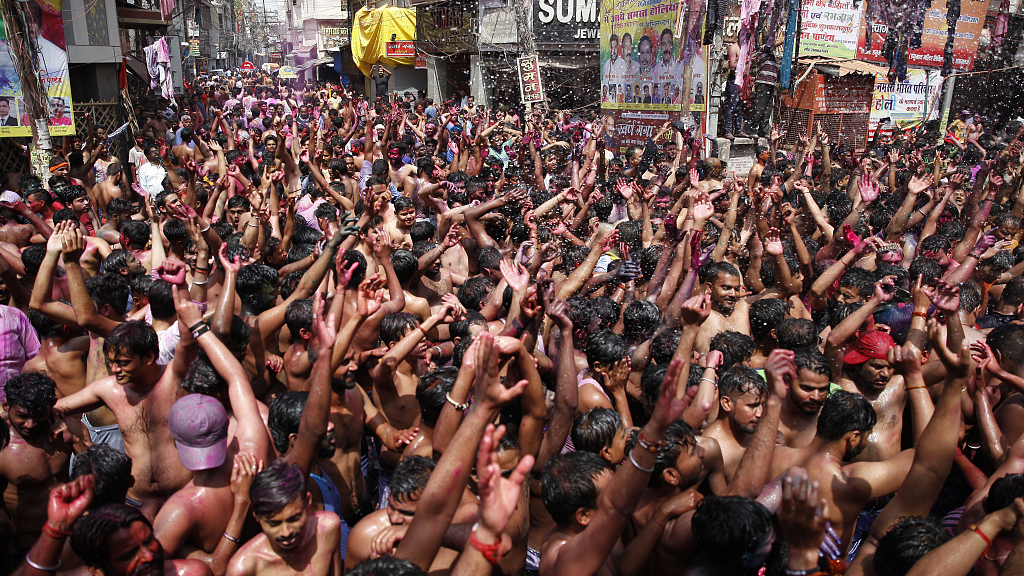 Read and watch: 'It's very scary, things are spiraling out of control'

Jayalal also acknowledged that India prematurely declared victory over COVID-19 despite the warnings from experts to the contrary and cited that as the main cause for the situation to spiral out of control.

"So, when apparently, due to various reasons, India was doing well, everybody on the top took credit. They started trumpeting and celebrating it forgetting the forecast and warnings given by the doctors associations and healthcare experts saying that if you let down your guard then you are going to be in trouble," he said without mentioning names.

However, it is well known that Indian Prime Minister Narendra Modi boasted defeating the pandemic as daily cases fell to less than 10,000 in early February after reaching a peak of 94,000 last September, and after India started its vaccination drive. Modi and his government have also been blamed for allowing crowded religious festivals, cricket tournaments and massive election campaigns in recent months that are now seen as superspreader events.

"Success has many fathers and failure is an orphan," Jayalal said.

"Every other country in the world had a second wave and the second wave was very, very disastrous. But we were really on a celebration mode, and we let off the hook. We were overconfident. We went ahead with electioneering and religious festivals and… we wanted to take credit for something," he said.

While he agreed that the double mutant variant of the virus that has emerged in India is also to be blamed for the current spike, Jayalal still attributed "90 percent" to the complacence that prevailed in the country earlier this year due to misplaced confidence exuded by the top leadership.

'Healthcare has never been our priority' 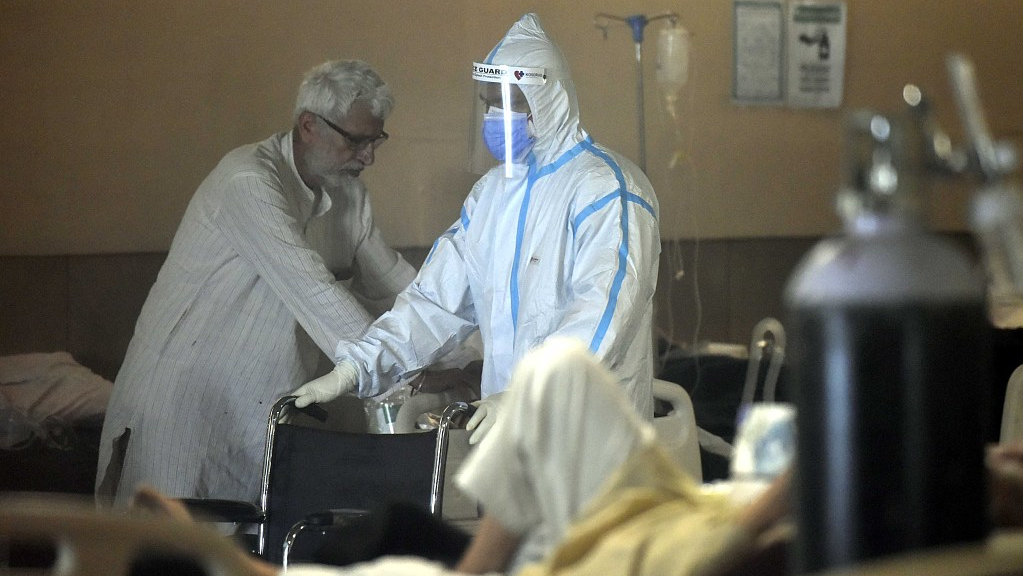 While the IMA chief admitted the limitations of India's healthcare infrastructure, he objected to the suggestion that it has completely collapsed.

"I do not agree that our healthcare system has collapsed but yes we have reached our maximum limit," he said.

He felt that the authorities lost precious time since last year and failed to adequately augment the healthcare system to be battle ready for the second wave of the pandemic.

"Even after the first wave, the government failed to add more infrastructure... They were thinking more of restarting the economy but we were insisting that only when you live, that money is going to be of any use."

Jayalal lamented that healthcare has never been given the priority that it deserves in India.

"Budgetary allocation for health hasn't gone beyond 1.2-1.5 percent of the GDP in India when countries such as the U.S. and the UK spend 16 percent of GDP on public health," he said.

"It is not only the failure of one government, but successive governments have miserably failed to realize that health is a fundamental right of [an] individual and that it is the government's responsibility to ensure that public health and preventable health are available to the people," he added. 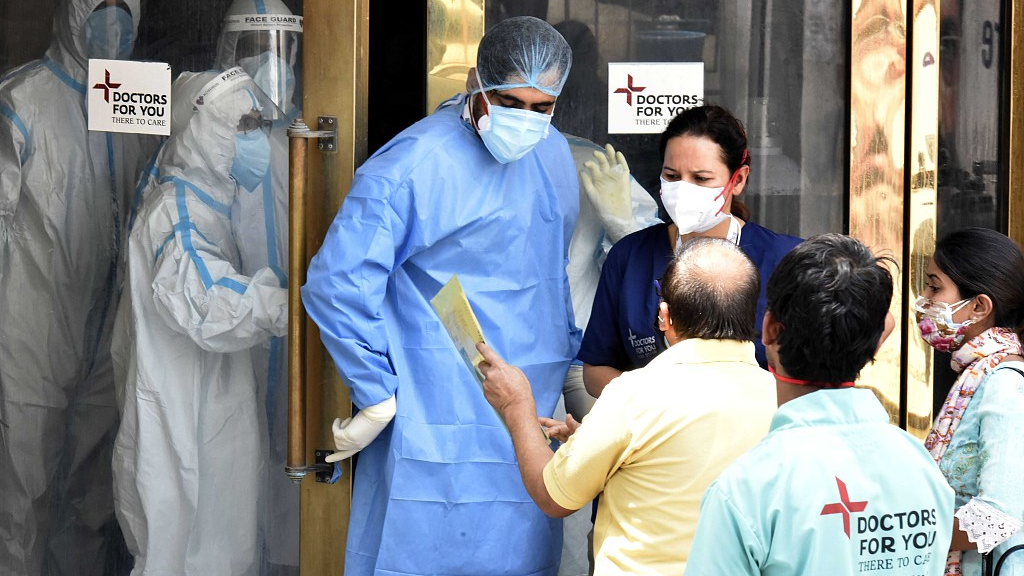 To deal with the worsening pandemic situation, Jayalal recommended a lockdown to break the chain of the virus.

"The first thing we immediately need is a pre-planned, pre-announced lockdown for two weeks that is going to help us to recoup and arrange everything in the hospitals and make us empowered to face the challenge. This challenge is going to be there for another two to three months at least. So, we need to prepare for that."

Alternatively, he advised the public for a self-lockdown.

"People must consider a self-imposed lockdown if the government isn't announcing one. This is very important at this stage. As responsible people, everyone must maintain a COVID-appropriate behavior," Jayalal remarked.

Jayalal also proposed setting up of a special ministry to lead the action against the pandemic.

"COVID-19 healthcare needs a multidisciplinary approach. You need several arms of the government working together. A dedicated ministry, at least for a short time, can be created with more dynamic administrators who can take quick decisions in the frontline," he elucidated.

The IMA chief called for higher budgetary allocation in the long run and the inclusion of qualified medical administrators in healthcare policy-making and implementation. Jayalal called for reviving the British-era Indian Medical Service, which was discontinued after India gained independence in 1947.

'China's COVID-19 experience must be studied' 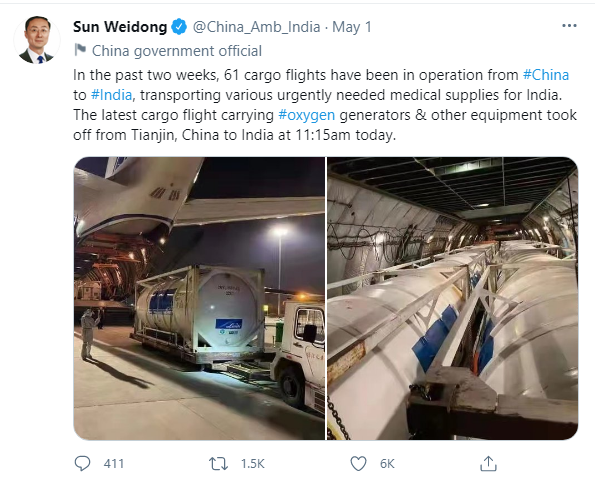 A screenshot of a tweet by Chinese Ambassador to India Sun Weidong, detailing the transportation of recent medical supplies from China to India. /Twitter @China_Amb_India

A screenshot of a tweet by Chinese Ambassador to India Sun Weidong, detailing the transportation of recent medical supplies from China to India. /Twitter @China_Amb_India

Jayalal has commended China for containing the pandemic in a very short time and returning the country back to normalcy. He suggested India needs to study and understand from China's experience.

"As a researcher and a doctor, it is important to look into [what] exactly happened in China and how they controlled it. Why was there no second wave and how they were able to produce the vaccine so early?" he said.

"I really want to congratulate China for the excellent work they have done in containing the disease in a very short time, and putting back the country into the normalcy and able to prevent the country from not getting the second wave. So that's all of the positive things which we are now seeing there. But if it is open to all then we can also understand how it has been achieved actually," he added.

He also welcomed the international help that India is getting in its fight against the pandemic, including from China.

"Many countries are coming forward to help us and we've always welcomed them. It reflects the passion and compassion of humanity. We welcome that. This mutual help and relationship should continue to exist in the fight against COVID for a long time," he said.