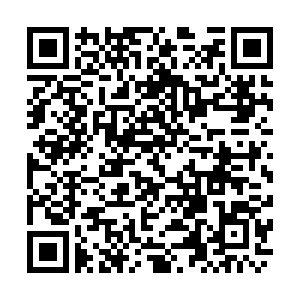 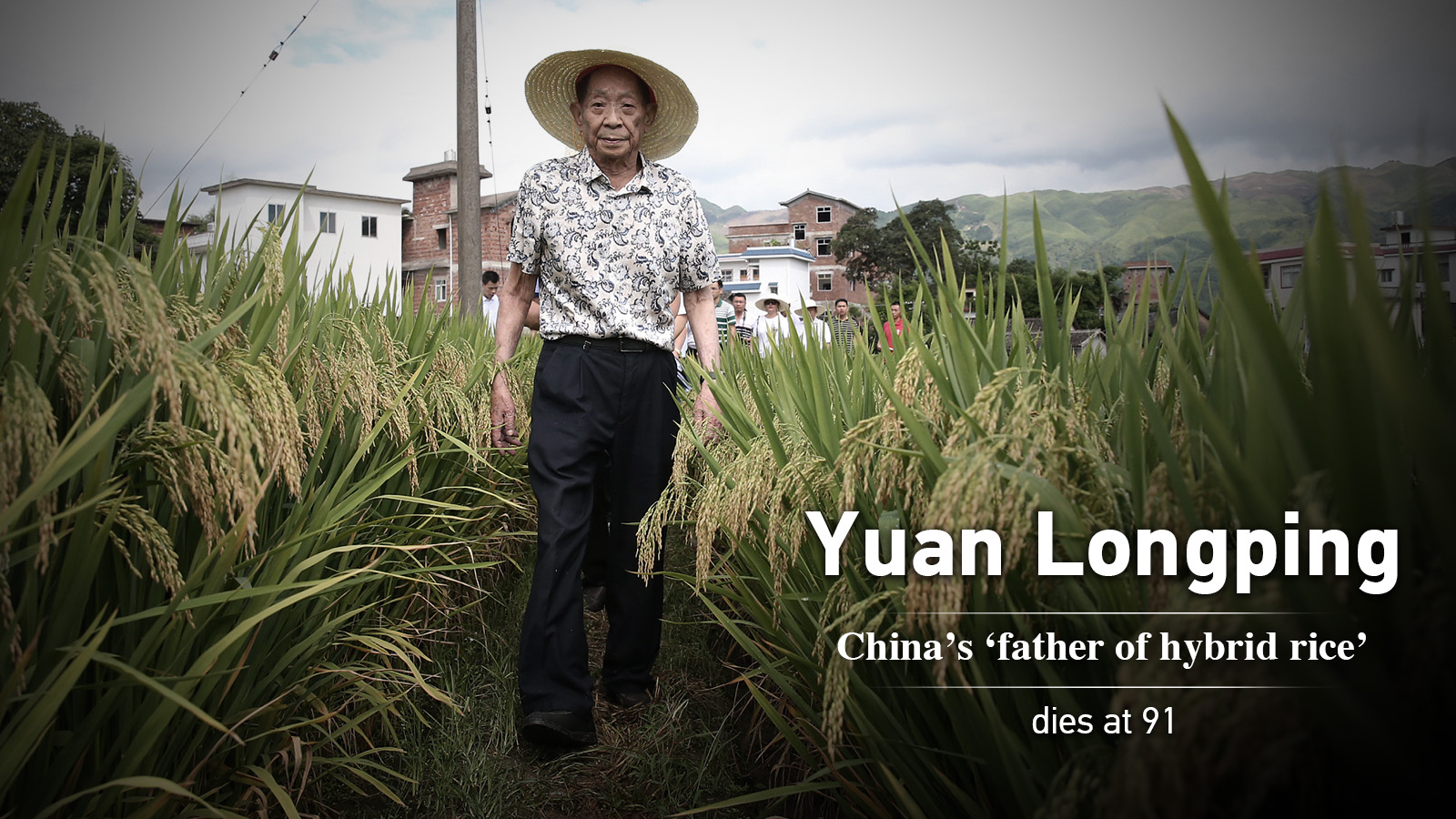 Yuan died of organ failure in Xiangya Hospital of Central South University in the early afternoon, according to local newspaper Hunan Daily.

Earlier this year, he was still conducting scientific research at the Sanya Hybrid Rice Research Base in China's southernmost province of Hainan. His health suffered after he fell down at the base on March 10.

His dedication to rice production increase to feed the people dates back to the mid-20th century when China was going through a tough time.

"My life goal is to help all people stay away from hunger."

As a young teacher in Hunan's countryside, Yuan witnessed the devastation brought by a nationwide famine, with massive crop failures, which lasted from 1959 to 1961. On a day in 1960, Yuan went outside of the school and came across two scrawny corpses lying on the side of the street. The frames were so thin that they looked like skin being wrapped on skeletons. The scene deeply stirred Yuan, who felt that he must do something.

"Something as small as a grain can save a country, while it can also make a country fall," he said during a television interview with CCTV.

Back then, rice was thought to be self-pollinating, which was an unarguable scientific theory. After a flurry of failed experiments to prove this theory, Yuan decided to challenge the "truth" and hence immersed himself in rice hybridization experiments, despite many calling him a "chairwarmer."

He spent the next four years looking for a wild male-sterile rice variety till the summer of 1964 when he discovered such a plant. His experiments afterward showed that male-sterile natural species could be crossed with other plants.

In 1973, he cultivated the world's first high-yielding hybrid rice strain, which could reach a yield of over 500 kg per mu (0.067 hectares) from previous 300 kg. Such rice varieties not only give higher yield but also reduce the plant area needed without sacrificing the quality of the rice. 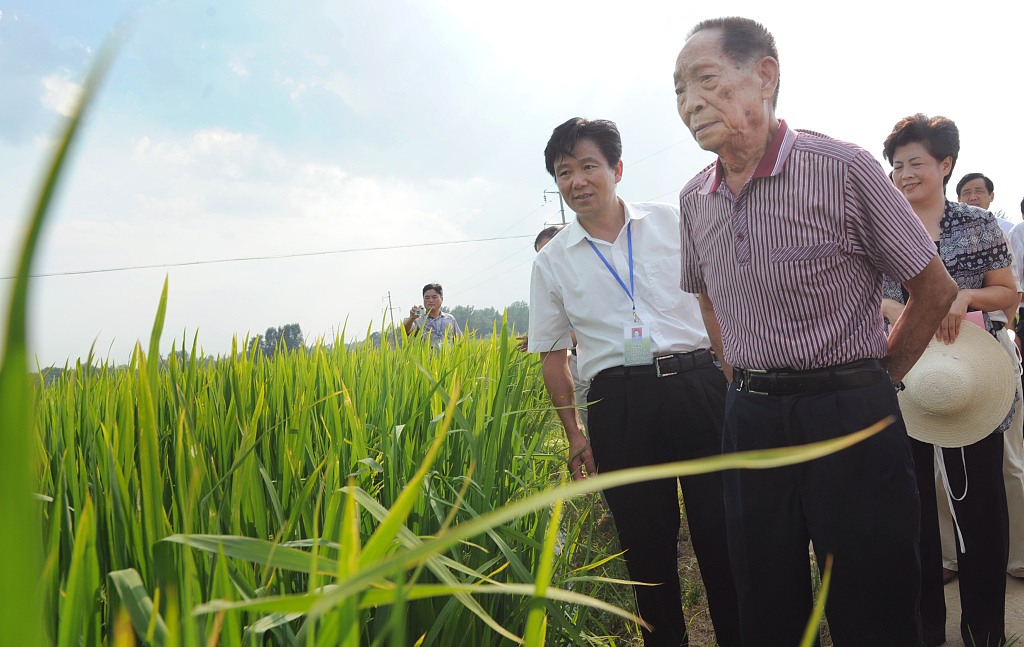 As a result, China's total rice output increased from 5.69 billion tons in 1950 to 19.47 billion tons in 2000. Nowadays, the hybrid rice is grown in almost half of China's rice paddies and its yield makes up for 60 percent of the country's total rice production. The hybrid rice yields 20 percent more than the common breeds, the annual increase of which feeds up to 100 million people.

In 1994, Lester Russel Brown of the World Watch Institute published an article titled "Who will feed China" and came up with a book of the same name the next year, warning that the huge Chinese population would starve the world. In response, Yuan said, "Mr. Brown underestimated the potential of science and technology in field yield increase."

Two years later, Yuan started developing super hybrid rice breeding. "If we can raise the utility rate of luminous energy by 2.5 percent, then we'll have a yield of 1500 kg per mu." He was confident and undaunted. And his effort paid off as the goal was achieved last year.

According to China's second white paper on food security in 2019, China has basically achieved self-sufficiency in grain supply. In terms of rice, there's a surplus in production, the paper said.

Yuan's biggest dream in life was to develop more hybrid rice varieties and use it to address famine that keeps happening in many parts of the world. Over the past 40 years, Yuan and his team continuously held seminars and courses which taught his methodologies to some 14,000 students from nearly 80 countries. The agronomist, when in his old age, still traveled to as far as Africa to help solve technical failures and boost harvests.

So far, the hybrid varieties he developed have been grown extensively in over 40 countries, including the U.S., Brazil, India, Vietnam, the Philippines, Madagascar among others.

In the meantime, he was also engaged in cultivating salt-alkali tolerant rice, bringing rice grown in diluted seawater to people's table.

In 2019, Yuan, academician with both the Chinese Academy of Engineering and the U.S. National Academy of Sciences, was awarded with Medal of the Republic, China's highest honor, for his groundbreaking research. 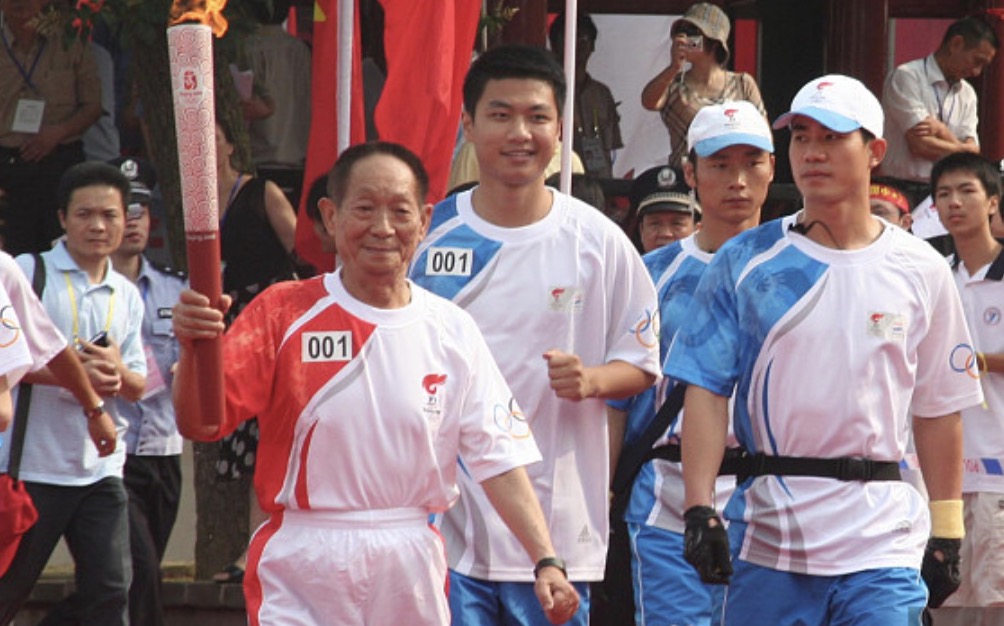 A man of character

Despite his success, which brought him unparalleled recognition and attention, Yuan kept a low profile for most of his life and kept the values of humility close to his heart.

Yuan's colleagues at the agricultural bureau under Hunan's provincial government remember him as a man who wore casual clothing - too unembellished for his status as a national hero. Even his most expensive suit never exceeded 800 yuan, or roughly $125.

When it comes to wealth, Yuan was even less sophisticated. He never took making money seriously, despite encountering countless opportunities to do so. "I don't like being a politician, and I'm not a businessman," he once said.

The pioneering scientist would donate most of the proceeds from international rewards he received and research centers he set up to the fund established in his name which encourage innovation in agricultural technologies.

Yuan's scientific achievements is increasingly highlighted in the world today, where nearly one out of eight people live in the fear of going hungry. Global food prices are at their highest since 2014, triggering warning from the United Nations about the threat posed by food insecurity.

As events such as global warming and the COVID-19 pandemic continue to cause food prices to skyrocket, hybrid rice varieties will continue to be a key food source that keeps the world food insecurity crisis from worsening.

Yuan was born to a family of intellectuals in Beijing, called Peking at the time, which moved then from Tianjin to southwestern Chongqing and then to central Hubei during the chaotic years of WWII. Fluent in English, his mother often read Friedrich Nietzsche's works. He liked English, geography and chemistry while didn't like mathematics at school.

While studying genetic breeding at Southwest Agricultural College, now part of Southwest University, in the early 1950s, Yuan was lax in discipline. He often slept late and left his bedding in a messy pile. His hobbies included volleyball and swimming.

When he became a teacher at Anjiang Agricultural College in Hunan upon graduation, Yuan played the violin he bought with his first-month salary to kill time.

Yuan liked shopping for bargains. One day, he and his wife Deng Zhe found a shirt that sold for 10 yuan while shopping, so he bought 10 of them, saying this way he'd be able to wear shirts in farmland without worrying about getting one dirty.

Yuan loved to help others. He instructed many PhD students. One student was quite poor, and there was this time when he called Yuan to ask for a bit of money to treat his sick father. Yuan gave the student 2,000 yuan, half of his salary.