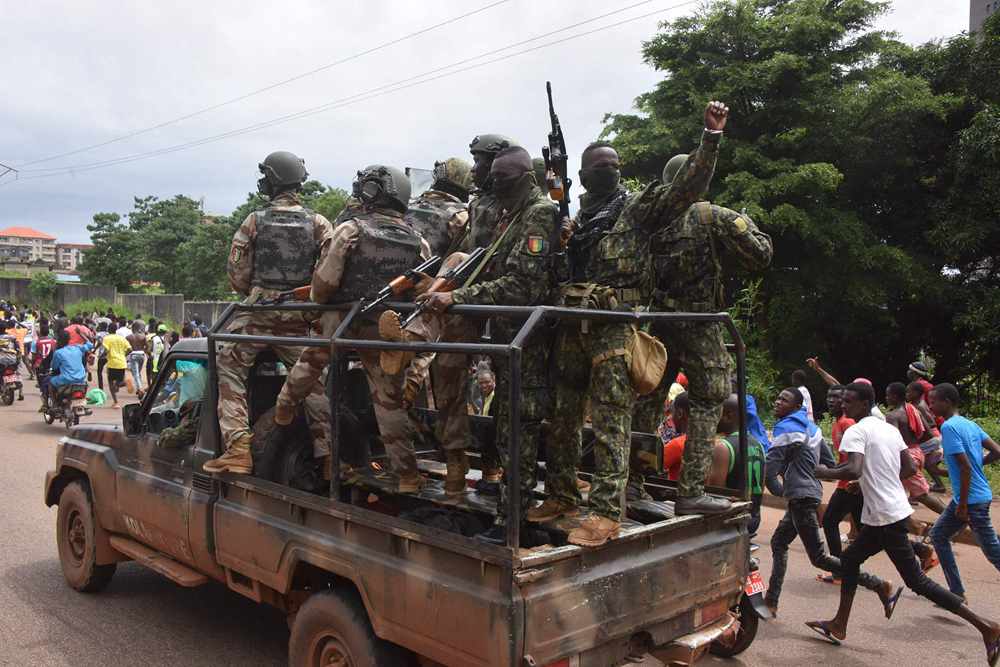 Members of Guinea's armed forces are seen in the street after the detainment of Guinea's president, Alpha Conde, in a coup in Conakry, Guinea, September 5, 2021. /CFP

Members of Guinea's armed forces are seen in the street after the detainment of Guinea's president, Alpha Conde, in a coup in Conakry, Guinea, September 5, 2021. /CFP

Guinean government officials have been barred from leaving the country until further notice, and a curfew imposed in mining areas has been lifted, the leader of an army unit that detained President Alpha Conde said on Monday.

Mamady Doumbouya told a gathering of Conde's ministers, including the prime minister and top government officials, that they should also hand back their official vehicles.

"There will be no witch hunt," he said a day after the coup which drew international condemnation and threats of sanctions.

Guinea has also reopened its land and air borders for commercial and humanitarian reasons, a military spokesman said on state television on Monday.

Doumbouya also promised to set up a "union" government to oversee a transition period, AFP reported.

Doumbouya announced Sunday on national television that his forces have arrested Conde and dissolved the government and national institutions. The country's borders were closed, and its constitution was declared invalid in the announcement.

The takeover in the West African nation that holds the world's largest bauxite reserves, an ore used to produce aluminum, sent the metal prices skyrocketing to a 10-year high on Monday over fears of further supply disruption in the downstream market. However, there was no indication of such disruption yet.

Light traffic resumed, and some shops reopened around the main administrative district of Kaloum in Conakry, which witnessed heavy gunfire throughout Sunday.

Despite an overnight curfew, the headquarters of Conde's presidential guard was looted by people who made off with rice, cans of oil, air conditioners and mattresses, a Reuters correspondent said.

UN Secretary-General Antonio Guterres on Sunday condemned the coup attempt in Guinea and called for the release of Conde.

"I am personally following the situation in Guinea very closely. I strongly condemn any takeover of the government by force of the gun and call for the immediate release of President Alpha Conde," Guterres tweeted.

"ECOWAS decidedly condemns this attempted coup d'etat that happened on Sunday," the community said in a statement, demanding the safe release of Conde and other detained people.

In a statement, France's foreign ministry denounced the coup, and demanded "a return to the constitutional order and calling for the immediate and unconditional release" of Conde, saying it is in close contact with its African and international partners.

Chinese Foreign Ministry spokesman Wang Wenbin told a regular briefing in Beijing on Monday that China opposed the seize of power in a coup and called for an immediate release of Conde.

"We hope that all parties can stay calm and exercise restraint, and, for the fundamental interests of their country and their people, resolve the issue through dialogue and consultation, and maintain peace and stability of the country," he said.

The Russian Foreign Ministry said in a statement on Monday that Moscow opposes any attempt at "unconstitutional change of leadership" and demands the release of the president and a guarantee of his immunity.

In an overnight statement, the U.S. State Department said that violence and extra-constitutional measures could erode Guinea's prospects for stability and prosperity.

"These actions could limit the ability of the United States and Guinea's other international partners to support the country," the statement said.

(Cover: People are seen in the street after the detainment of Guinea's president, Alpha Conde, in a coup in Conakry, Guinea, September 5, 2021. /CFP)