Download
Graphics: How Chongqing puts innovation at the forefront of economic growth
CGTN 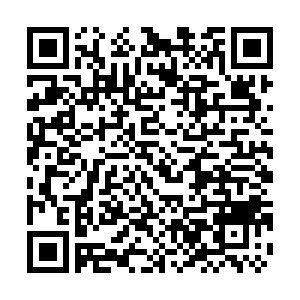 Editor's note: CGTN has made a series of reports on Chinese "Rising Star" cities whose annual GDP exceeds 1 trillion yuan ($156.3 billion). At the end of 2020, there were 23 such cities. This special report focuses on Chongqing.

Chongqing's GDP exceeded 1 trillion yuan in 2011, and passed the 2 trillion yuan mark in 2018. In 2020, its GDP reached 2.5 trillion yuan, with an average annual growth rate of 7.2 percent in five years, above the national average of 5.7 percent. 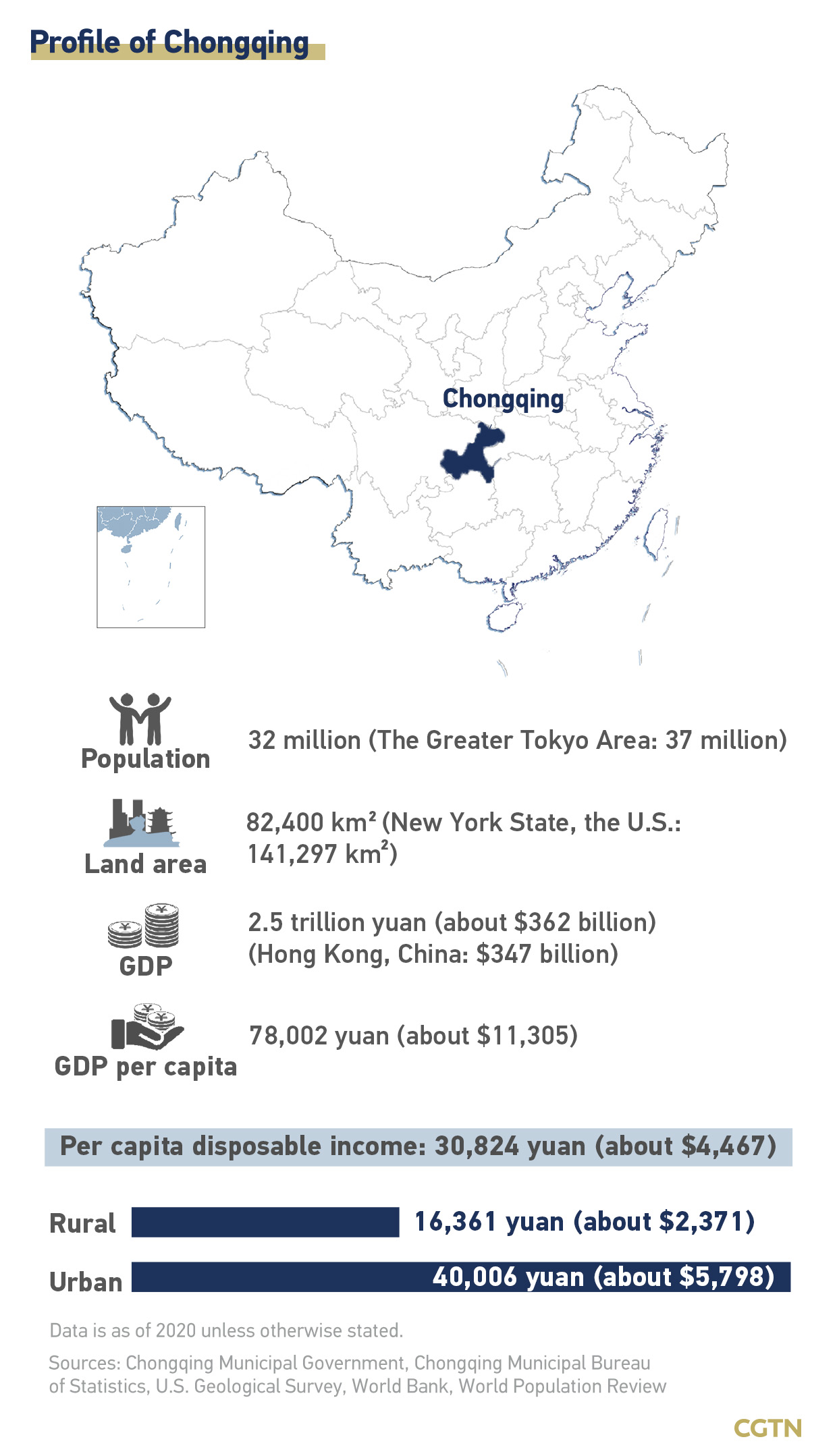 Chongqing has implemented a high-quality development strategy driven by innovation, with an aim to become a "smart city." In 2020, the digital economy contributed to 25 percent of its GDP.

Chongqing's innovation capabilities have continued to improve. In 2020, Chongqing's research and development (R&D) expenditure accounted for 2.1 percent of its GDP, 2.2 percent of the national total, ranking 16th in the country and third in the western region. Its growth rate remained at a relatively high level, ranking ninth in the country and second in the western region. During the "13th Five-Year Plan" period (2016-2020), the average annual growth rate was 16.4 percent, much higher than the national average, 11.5 percent. 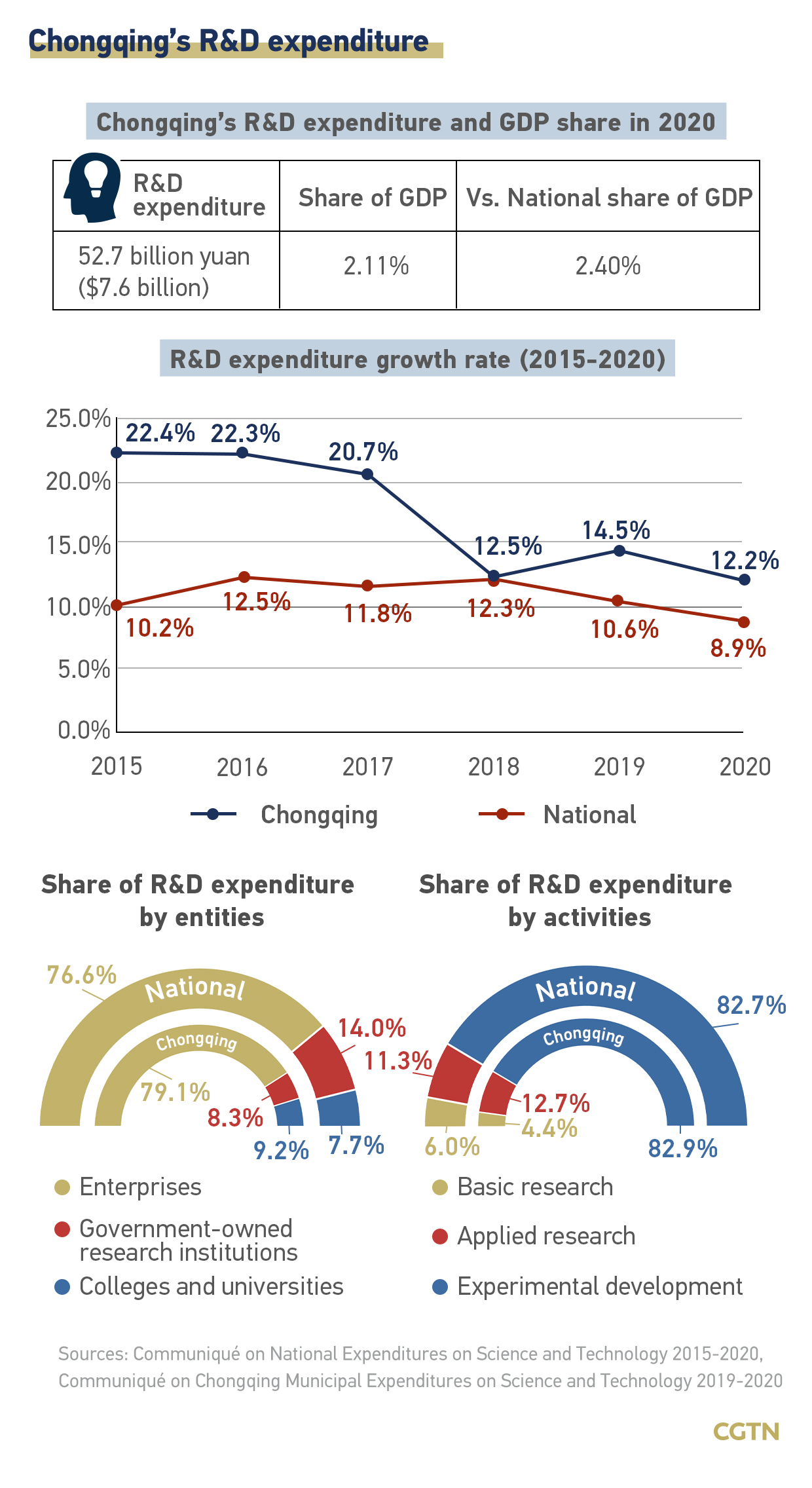 Guided by an innovation-driven development strategy centered on big data intelligence, Chongqing has promoted the intelligent transformation of traditional industries.

The automobile sector is the backbone of Chongqing's industry. However, the long-established product structure dragged down the city's growth. In response, Chongqing sped up the introduction of high-end intelligent models, pushing the auto sector to evolve with technological innovation.

Automobile manufacturing continued to be the sector with the largest R&D expenditure in 2020, with 11.2 billion yuan ($1.6 billion).

Zhu Huarong, chairman of Chongqing Chang'an Automobile, said that for many years, Chang'an has persisted in investing 5 percent of its sales revenue in R&D. Its intelligent connected vehicles have been favored by the market.

The Smart China Expo 2021 and the China-Shanghai Cooperation Organization (SCO) Forum on the Digital Economy Industry were both held in Chongqing in August, opening up new possibilities for international cooperation in the smart industry. Chongqing is the permanent site for the annual Smart China Expo.

In February, Chongqing issued its 14th Five-Year Plan (2021-2025) for economic and social development and the long-term goals for 2035. It called for innovation-driven development and the acceleration of the construction of a scientific and technological innovation center with national influence.

The plan puts forward quantitative indicators: by 2025, the added value of the digital economy will increase to 35 percent of Chongqing's GDP, and the R&D intensity (as a share of GDP) will reach 2.5 percent, equivalent to the Organization for Economic Cooperation and Development average before the COVID-19 pandemic.

Graphics: Why is foreign capital drawn to China's inland city of Chongqing?