Download
Beyond Infinity: One year on Tianwen-1's triumphant landing on Mars
Liu Xun 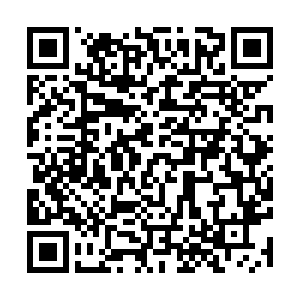 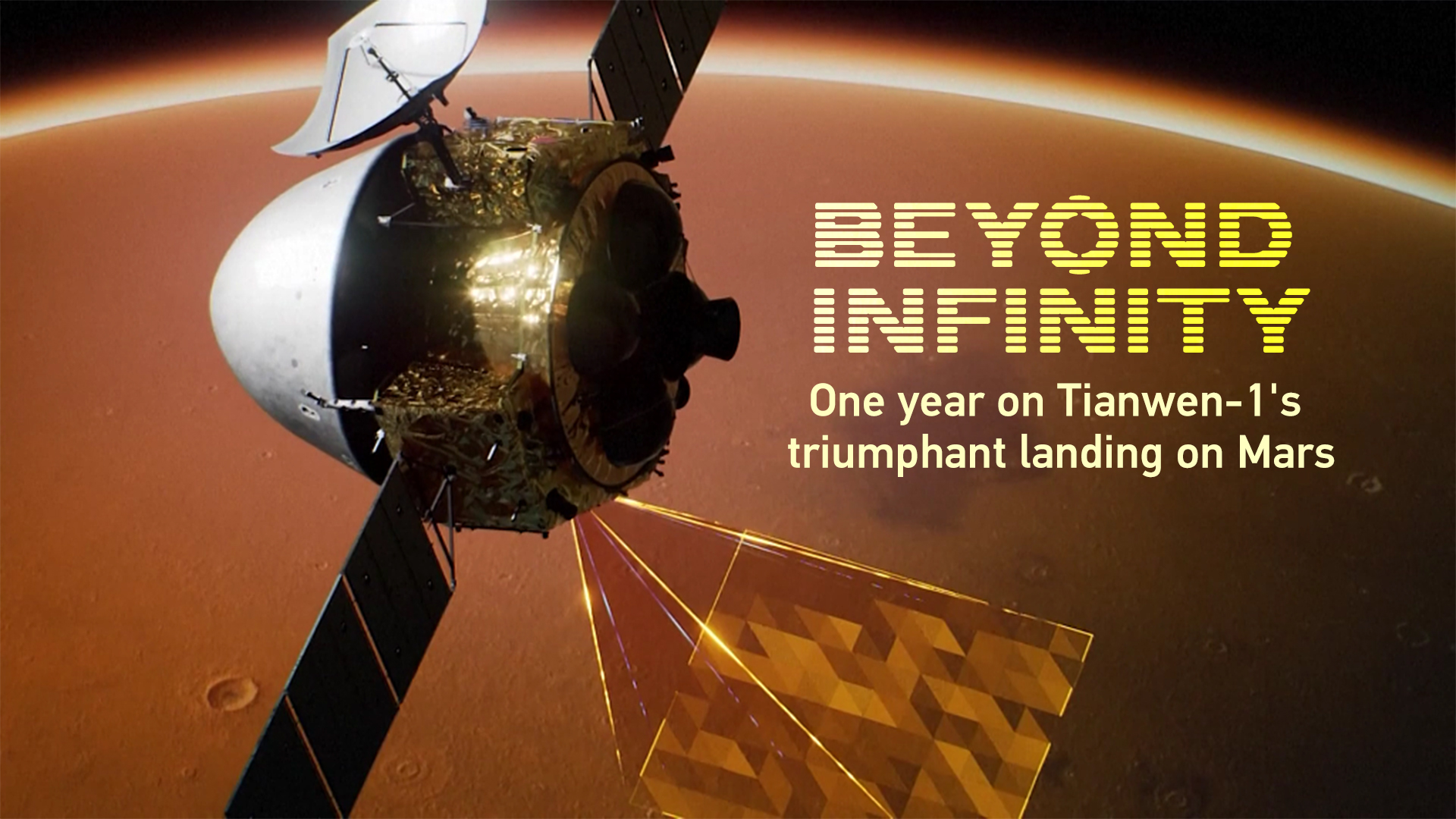 May 15, 2022, marks the first anniversary of the remarkable touchdown by China's Tianwen-1 on Mars in the southern part of Utopia Planitia, a vast plain on the northern hemisphere of the red planet, symbolizing the country's first probe landing on a planet other than the Earth.

Consisting of an orbiter, a lander and a rover, the Tianwen-1 probe landed on Mars May 15, 2021, and a week later the Mars rover Zhurong, which resembles a butterfly and means the god of fire in Chinese mythology, drove down from its landing platform onto the Martian surface. 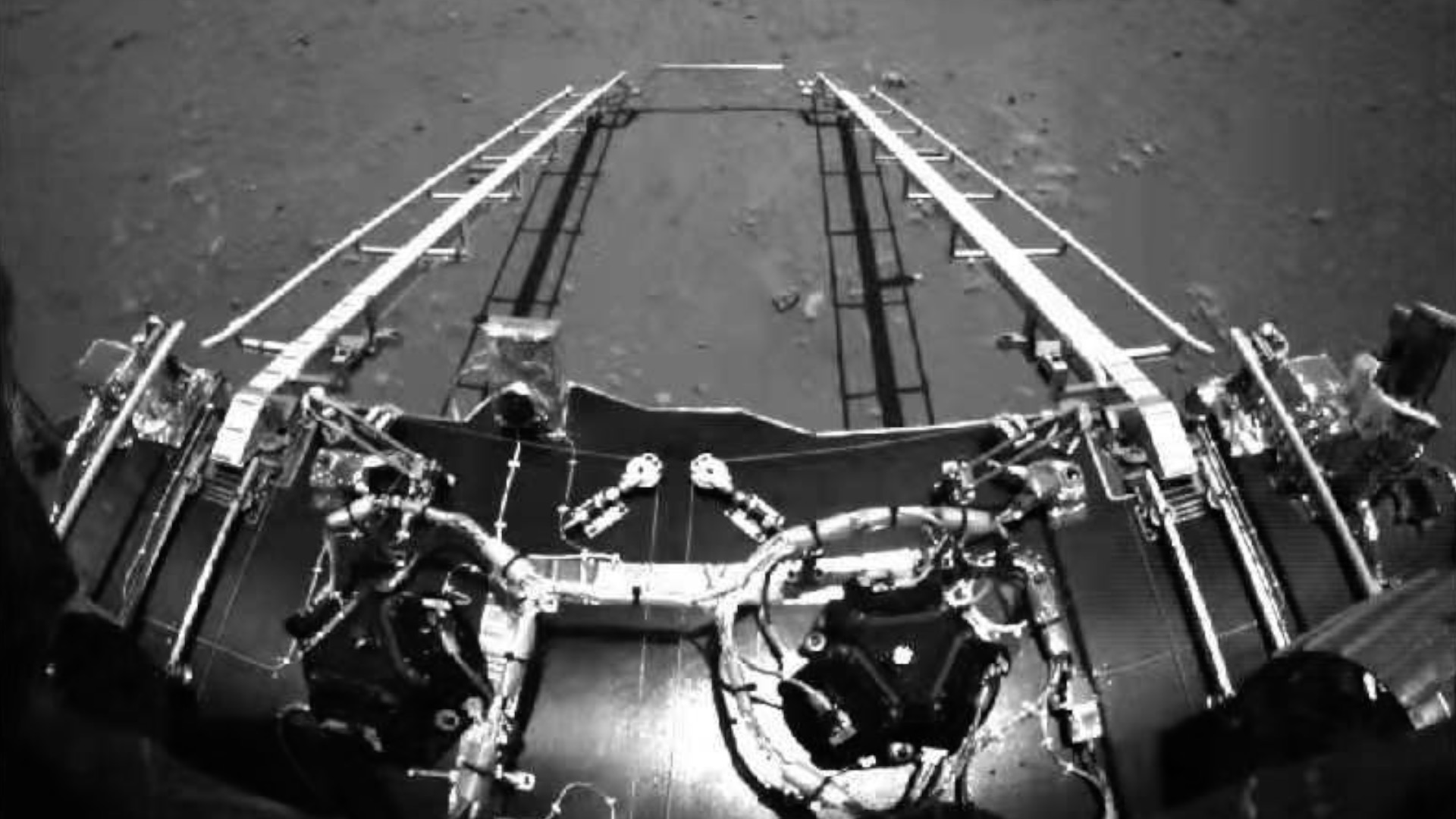 By May 5, 2022, the Tianwen-1 orbiter had been operating for 651 days at a distance of 240 million kilometers from Earth. Meanwhile, Zhurong had been exploring the surface of Mars for 347 Martian days, or about 356 days on Earth – a Martian day is approximately 40 minutes longer than a day on Earth – and had traveled 1,921 meters.

Both operating normally, the orbiter and rover had obtained and sent back approximately 940 gigabytes of precious firsthand data to Earth, assisting Chinese scientists in further revealing the mysteriously remote planet.

What is the Tianwen-1 Mars mission?

The Tianwen-1 Mars mission was approved in January 2016 by the CNSA, and the probe was launched on July 23, 2020, carrying out deep space maneuvers and then expeditions on Mars.

On February 10, 2020, Tianwen-1 successfully entered the orbit of the red planet after activating a crucial braking system that decelerated the spacecraft's speed and enabled it to be captured by Mars' gravity and become China's first Mars satellite.

The primary mission of Tianwen-1 is to detect signs of life on Mars, be it in the present or the distant past.

The probe will also help examine the atmosphere, landscape, geological and magnetic characteristics of Mars to provide clues to the origin and evolution of Mars and the solar system. Scientists might be able to calculate whether Mars could become a second home for humans based on all these findings.

Upon landing, Zhurong has kept moving southward and transmitted data back to Earth.

In addition to exploring the Mars surface, it also passed through multiple complex terrains and detected Martian rocks, sand dunes and impact craters, thus obtaining a large amount of data.

By August 15 last year, the Mars rover had worked on the red planet for 90 Martian days, or about 92 days on Earth, accomplishing all scheduled tasks. Since it was in good condition, the rover continued service despite reaching its 90-day target.

From the data collected by Zhurong, Chinese scientists have found new evidence that there was water on Mars in the past, and there are hydrated minerals on Mars that can be potentially exploited during future crewed missions.

The findings from the data contribute to a growing body of telltale signs that suggests liquid water may have persisted much longer on Mars than previously thought, indicating that there are currently considerable stores of water in the form of hydrated minerals and possibly ground ice at this site.

The study published in the journal Science Advances on May 11 showed that a large impact basin on Mars contained liquid water during the Amazonian epoch, the planet's most recent geologic epoch.

Another study by Chinese scientists published in the journal Nature Geoscience in March also indicates that the site where Zhurong landed might have experienced wind and possibly water erosion. 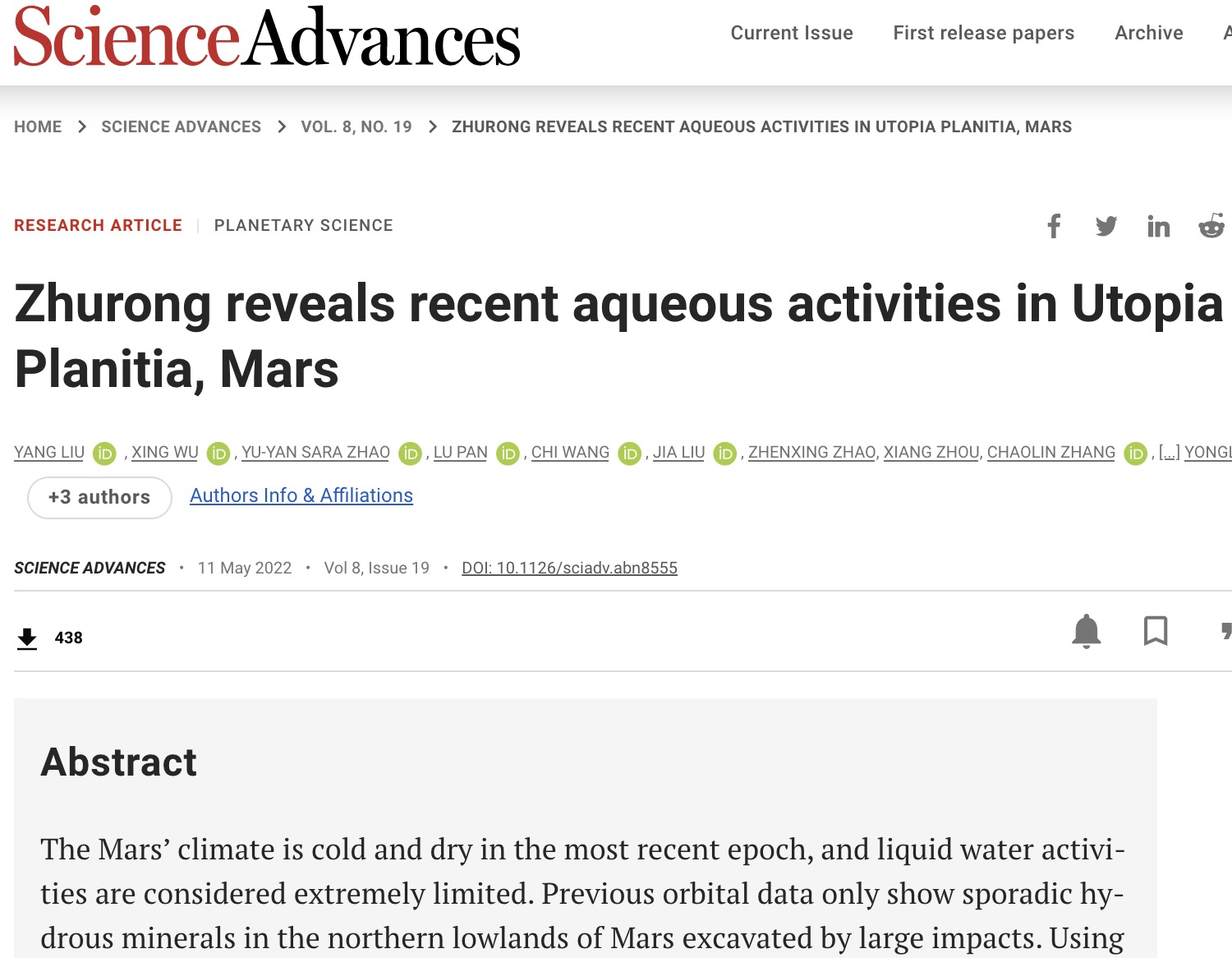 A screenshot of the study published in Science Advances.

A screenshot of the study published in Science Advances.

Tons of future endeavors are blueprinted for China's planetary exploration; Tianwen-1 is only the beginning.

According to a white paper on the country's space program, China will continue its lunar exploration with the future Chang'e-6, Chang'e-7 and Chang'e-8 missions and complete the construction of an international lunar research station with other countries, global organizations and various partners.

Launching an asteroid probe, retrieving samples from near-Earth asteroids and collecting samples from Mars are all future tasks, alongside the Tianwen-2 probe's entering the preliminary prototype development stage.