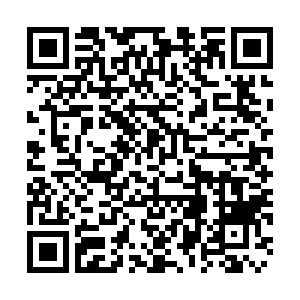 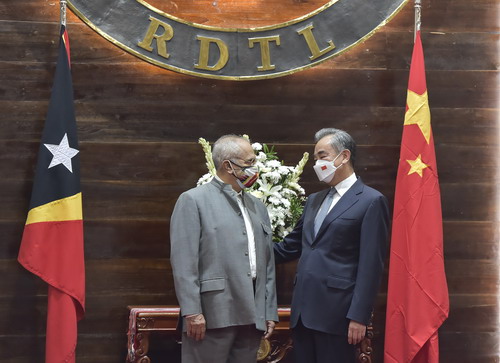 China is willing to make joint efforts with Timor-Leste to push their bilateral comprehensive cooperative partnership to a higher level, said Chinese State Councilor and Foreign Minister Wang Yi on Saturday when meeting with President of Timor-Leste Jose Ramos-Horta in Dili, the capital of Timor-Leste.

Noting that China supports Timor-Leste's active participation in regional affairs, Wang said that the country looks forward to Timor-Leste joining the Association of Southeast Asian Nations at an early date and becoming a member of the Asian family.

Ramos-Horta said that Timor-Leste is full of confidence and expectation for the future of bilateral relations.

China's development not only benefits Timor-Leste, but also is of great significance to the region and the world, he said.

The two sides agreed to uphold and defend multilateralism.

The Global Development Initiative and Global Security Initiative proposed by President Xi Jinping are widely supported and Timor-Leste is welcome to take an active part in them, Wang said.

Timor-Leste stands for peaceful settlement of differences through consultation and a united response to challenges to international peace and security, Ramos-Horta said. 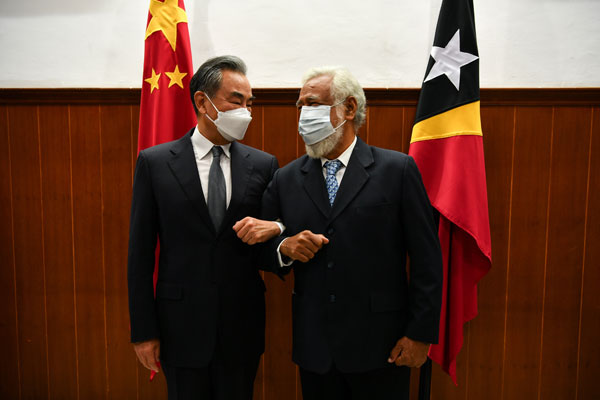 Wang told Xanana that China, as a large developing country and a responsible major country, has its diplomatic tradition of treating small and medium-sized countries equally

"It is our duty to safeguard the interests of developing countries; and it is our international responsibility to help everyone accelerate their development and revitalization," said Wang.

He reiterated that China never seeks sphere of influence and takes no interest in engaging in any geopolitical rivalry.

No country should be forgotten and no region should be marginalized, Wang said, adding China is willing to carry out tripartite or multi-party and stands firmly on the side of developing countries 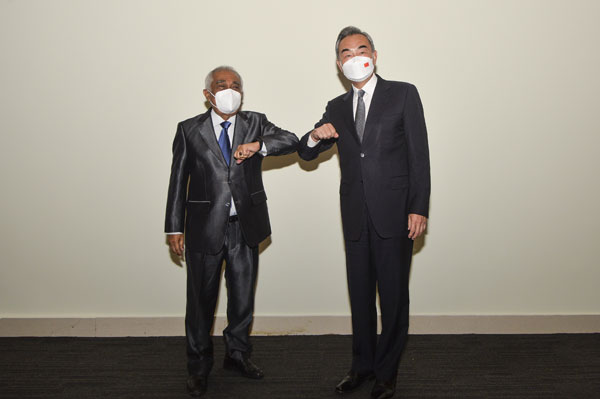 When meeting with Alkatiri, Wang pointed out China's development relies on the diligence, wisdom and hard work of the Chinese people, not aggression, colonization, hegemony or bullying.

He stressed China's continued development is a growing force for peace in the world and an increasing factor of global stability, which will provide more development opportunities for all countries.

Wang told Alkatiri, China is sincerely wiling to help developing countries and small and medium-sized countries accelerate their development with no attachment of political strings and no imposition of its will on others.

Now some countries are trying to draw ideological lines and create new confrontations in the international arena, which is against the trend of the times and will not succeed, the Chinese foreign minister noted, adding China will always be a friend and partner that developing countries can trust and rely on.

Alkatiri said China is not only a staunch defender of world peace, but also shares development dividends with other countries and is committed to upholding fairness and justice.

China has never exported its ideology and has brought development and opportunities to all countries, Alkatiri said, adding Timor-Leste trusts China, supports China's development and growth, and is willing to work with China to commit to the common pursuits and goals of developing countries. 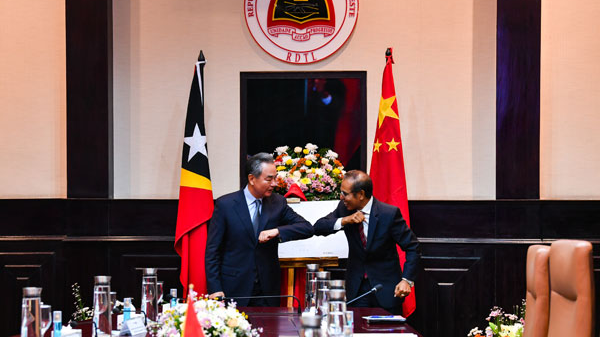 A day earlier, when meeting with Timor-Leste's Prime Minister Taur Matan Ruak, Wang said that China is ready to work with Timor-Leste to make a cooperation plan under the Belt and Road Initiative (BRI) and specify key areas of cooperation.

Proposed by China in 2013, the BRI comprises the Silk Road Economic Belt and the 21st-century Maritime Silk Road, with the aim of building trade and infrastructure networks connecting Asia with Europe and Africa along and beyond the ancient Silk Road routes.

China and Timor-Leste signed a Memorandum of Understanding (MoU) for cooperation on the BRI in March 2017.

Wang said both sides signed the MoU on the BRI, and the "one network," "one expressway" and "one port" projects have been undertaken by Chinese enterprises in Timor-Leste, which have greatly improved infrastructure and people's livelihoods.

The Chinese-built projects include the Timor-Leste State Grid, the Suai-Beaco Highway, the country's first expressway, and the Tibar Bay Port.

China is ready to work with Timor-Leste to map out a BRI cooperation plan and determine key areas, so as to inject new impetus into Timor-Leste's post-pandemic economic recovery as well as its mid- and long-term development, the foreign minister added.

Timor-Leste will firmly adhere to the one-China principle, expand friendly cooperation and open up new prospects for the development of bilateral relations, he added. 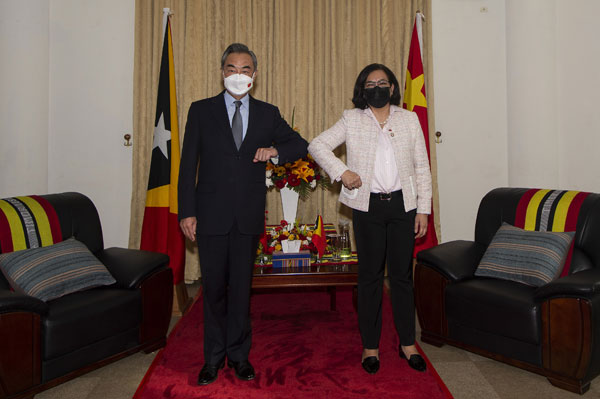 Noting that this year marks the 20th anniversary of Timor-Leste's independence and the establishment of diplomatic ties between China and Timor-Leste, Wang said the two sides have supported and trusted each other over the past 20 years with steady development of bilateral relations and deepening practical cooperation.

For her part, Magno said Timor-Leste and China enjoy a long history of friendship and the practical cooperation between the two countries is fruitful.

The two sides are willing to strengthen the synergy of development strategies, deepen mutually beneficial cooperation in key areas including infrastructure, energy production capacity, poverty alleviation, education and health, help Timor-Leste boost its capability of self-development, and improve the well-being of its people.

Both sides hope to continue cooperation on hybrid rice and the Juncao technology and to build agricultural hi-tech development zones to help Timor-Leste secure food self-reliance and speed up its agricultural modernization process.

Following the meeting, the two foreign ministers attended a signing ceremony of cooperation documents related to issues including the economy and technology, digital television and healthcare.

They also attended the inauguration ceremonies of a Confucius Classroom in the Institute of Business and a football stadium.