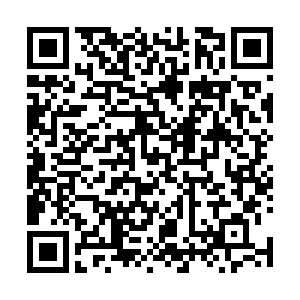 Editor's note: Coral reefs are considered the "rainforests of our seas" because they are living ecosystems that provide shelter and habitat to countless species of marine life. For this year's World Oceans Day, CGTN Nature invited Liao Baolin, a senior engineer at the Shenzhen Institute of Guangdong Ocean University, to talk about China's coral reef protection and share his stories with these marine invertebrates.

Blue waters, remote nature resorts and colorful sea creatures are some of the words that pop into our minds when we talk about coral reefs. But Liao Baolin, a senior engineer at the Shenzhen Institute of Guangdong Ocean University (SZIGOU), has chosen Shenzhen, a modern metropolis in south China, to plant corals and conduct his research. 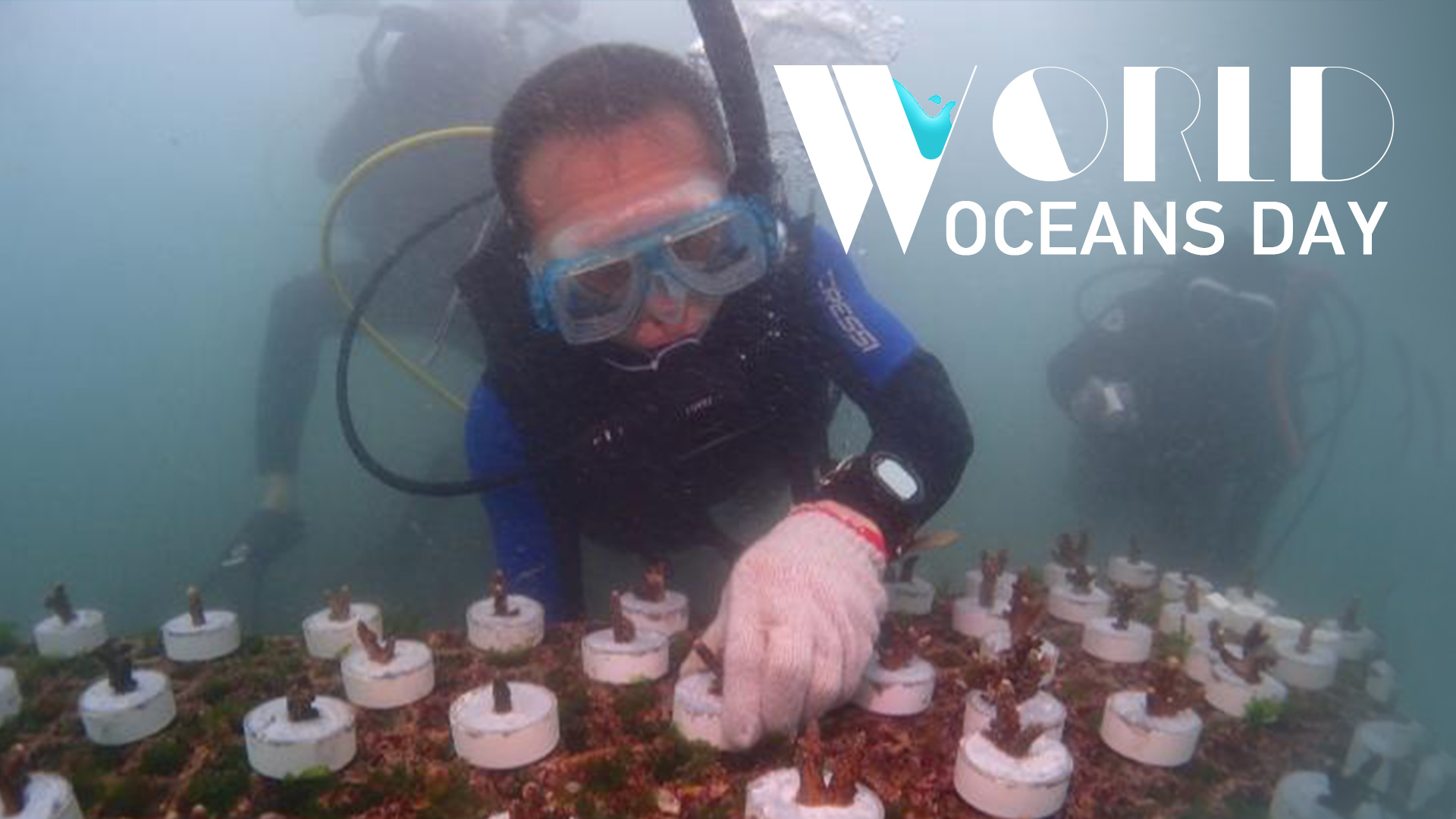 When Liao graduated from university in 2006, he found a job at Xuwen Provincial Coral Reef Nature Reserve in Guangdong Province. At that time, there was only one national coral reef nature reserve in China, and the public knew very little about corals. When he did field work along the sea, he noticed that local fishermen believed corals were stones and used them to make lime and built houses. However, today, the coral reef nature reserve he first worked for has been lifted to the national level, and exploring corals to build houses is forbidden.

To better understand and restore the coral reefs, Liao has conducted surveys and investigations in the sea areas of Guangdong for the past 16 years. Between 2010 to 2015, some coral reefs in Guangdong showed a tendency toward degradation. 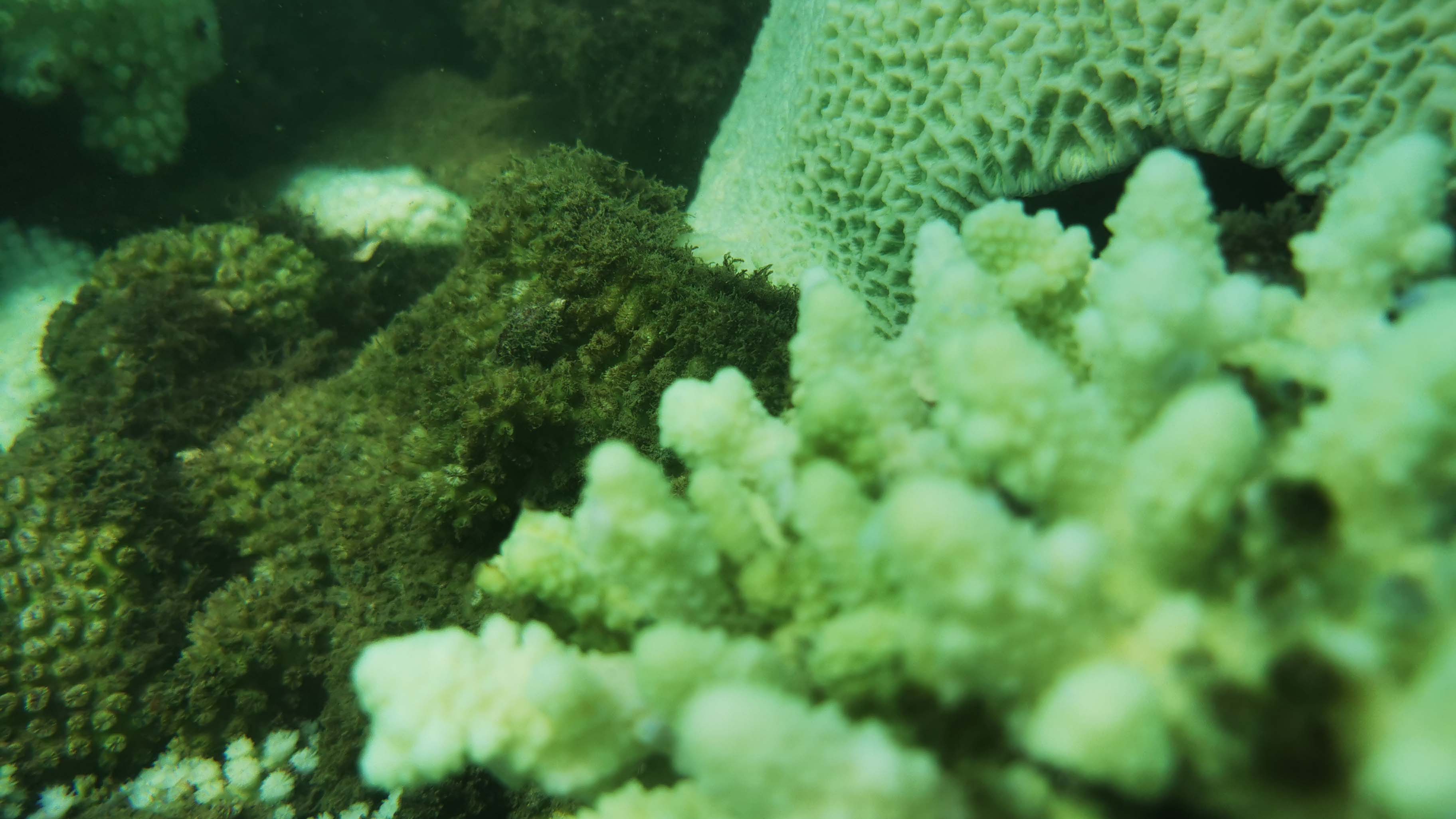 An image of dead corals at Yangpu Port, China's Hainan Province, August 7, 2020. The corals died as a result of the increased sea temperature. /ZIGOU

An image of dead corals at Yangpu Port, China's Hainan Province, August 7, 2020. The corals died as a result of the increased sea temperature. /ZIGOU

"Human activities threaten coral reefs, such as overfishing, coastal area development, seawater eutrophicating," said Liao. "Climate change is also one of the reasons, but it is relatively complex."

According to Liao, the data shows that the coral reefs have been "relatively stable" in recent five years. It is attributed to multiple effects, including improved public awareness of the environment and enhanced protection of the overall ecosystem, such as mangroves, seagrass beds and coral reefs.

Devoted to coral reef protection for over 16 years, Liao has witnessed the improvements, but there are still some risks. Some fishing industries still threaten the coral reef ecosystems in some coastal areas, and Liao has suggested banning destructive activities, such as seine fishing, in those areas.

As the saying goes, "all rivers run into the sea." In the same way, all the pollution from inland can also run into the sea and damage the marine environment. According to Liao, despite the strengthened environmental protection policies in coastal areas, suspended solids and seawater eutrophication could lead to algae bloom and put corals in danger.

The ecological balance matters most for corals in remote areas of the sea. Crown-of-thorns starfish (COTS) have a big appetite for corals, and the giant triton snail is one of the few natural predators of the COTS. If we overfish giant triton snails, the COTS will reproduce unchecked and wipe out the corals in that area.

Last year, China updated its list of key wild animals under state protection; corals and giant triton snails are included. Any form of fishing and exploring for both animals is now forbidden. 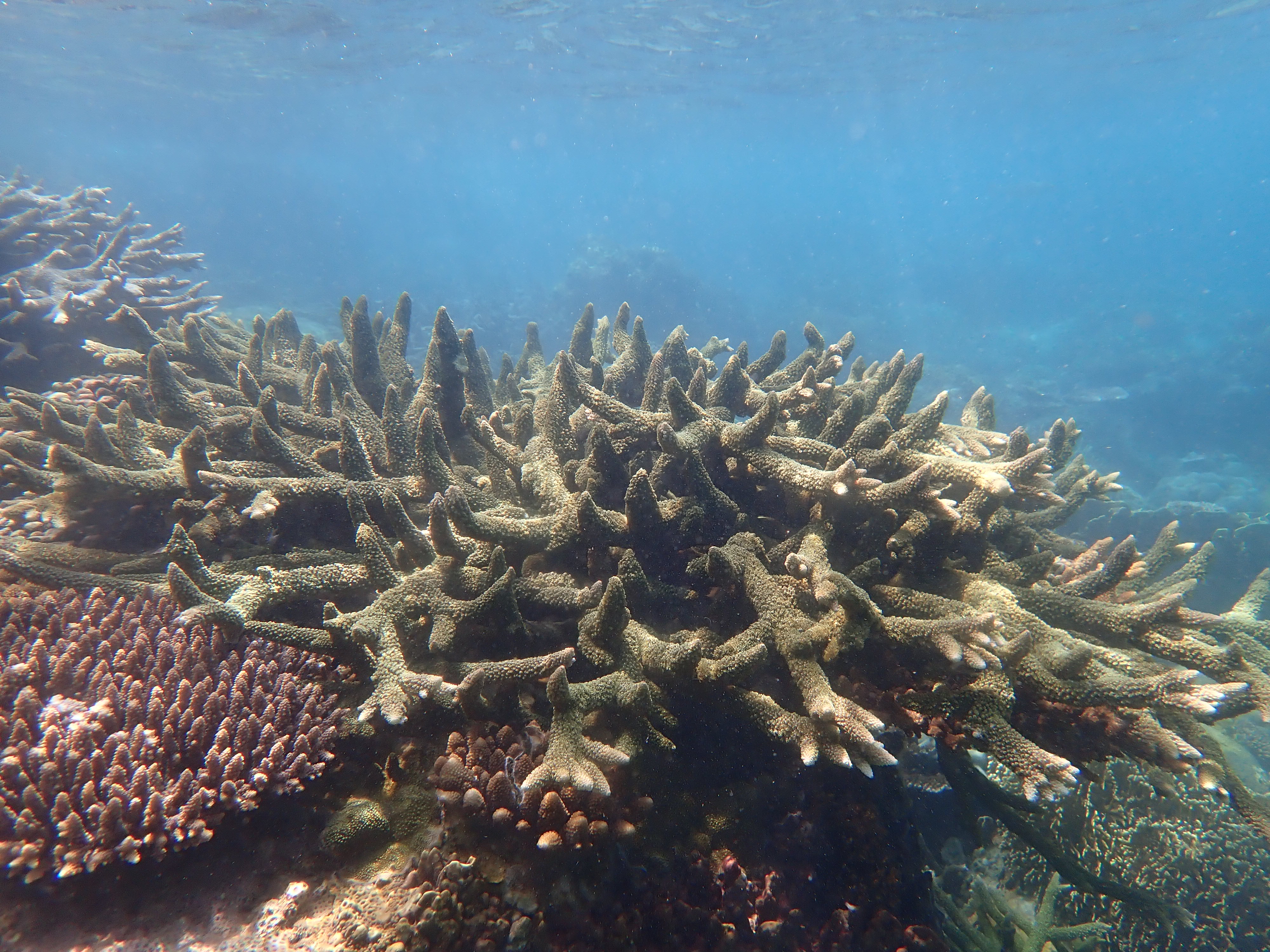 Growing corals in nurseries to repopulate damaged reefs is widely practiced. Instead of choosing well-populated areas, such as Hainan Island, Liao and his team are based in Shenzhen, a modern metropolis in Guangdong Province, to plant corals.

Shenzhen is the northmost distributed area for coral reefs. Unlike those in tropical seas, the species there are different. Most importantly, the corals in Shenzhen have developed stronger adaptability to the urban, monsoon-influenced, humid subtropical climate. Liao believes studying and cultivating corals species in Shenzhen can help repair coral reefs there and be used in a wider region.

Planting corals is not a one-and-done solution; researchers need to make sure the new corals can successfully grow and take hold in the following years. Thus, good management is necessary.

Shenzhen City is going to build its Dapeng New District into an economically strong district based on its ecological strength, and the district aims to become a national leader in ecological civilization construction by 2025. Once, law enforcement there detained a tourist because he took a coral from the sea. The strong governmental support has given Liao a good environment to restore and conserve the coral reefs. 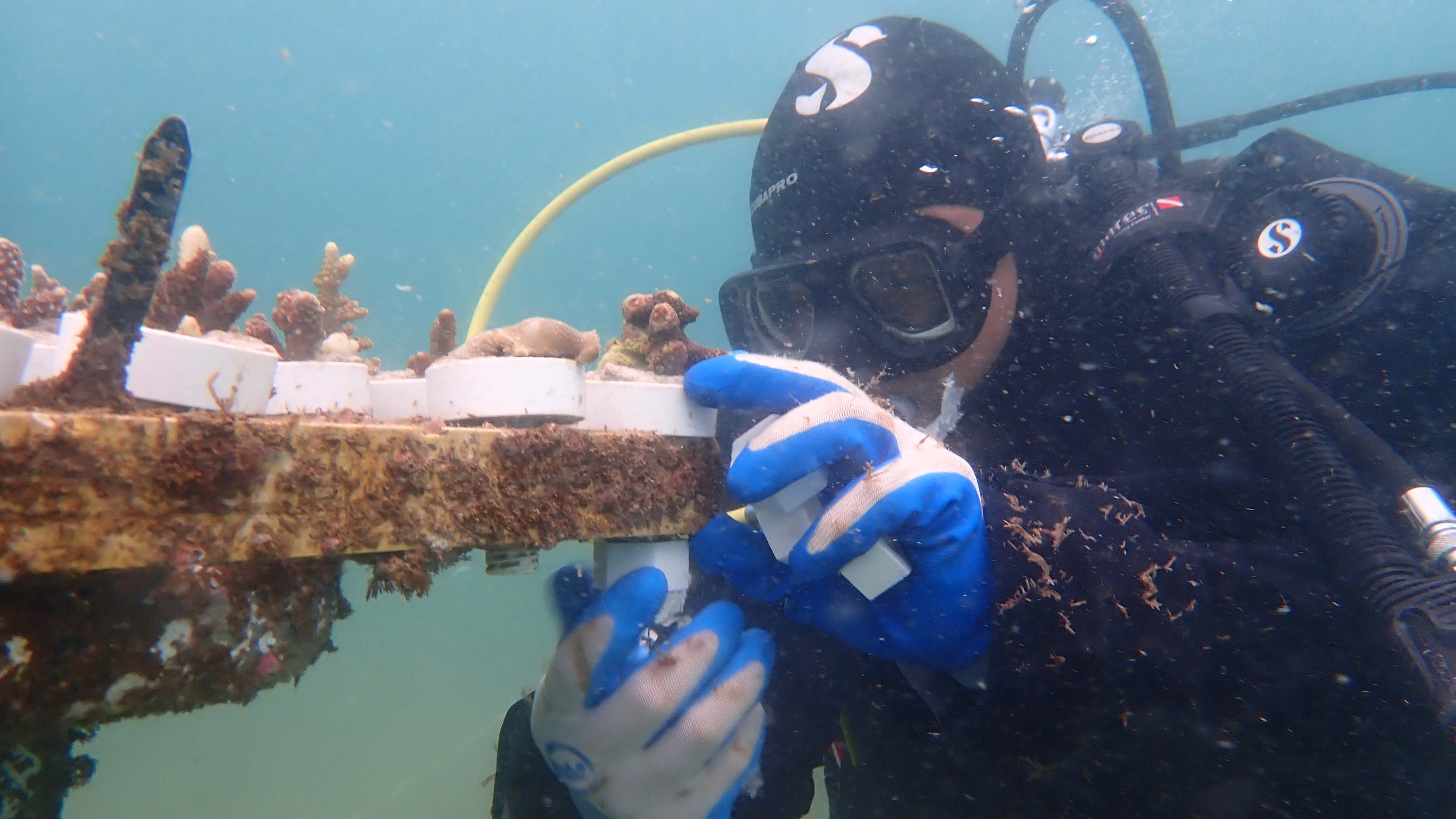 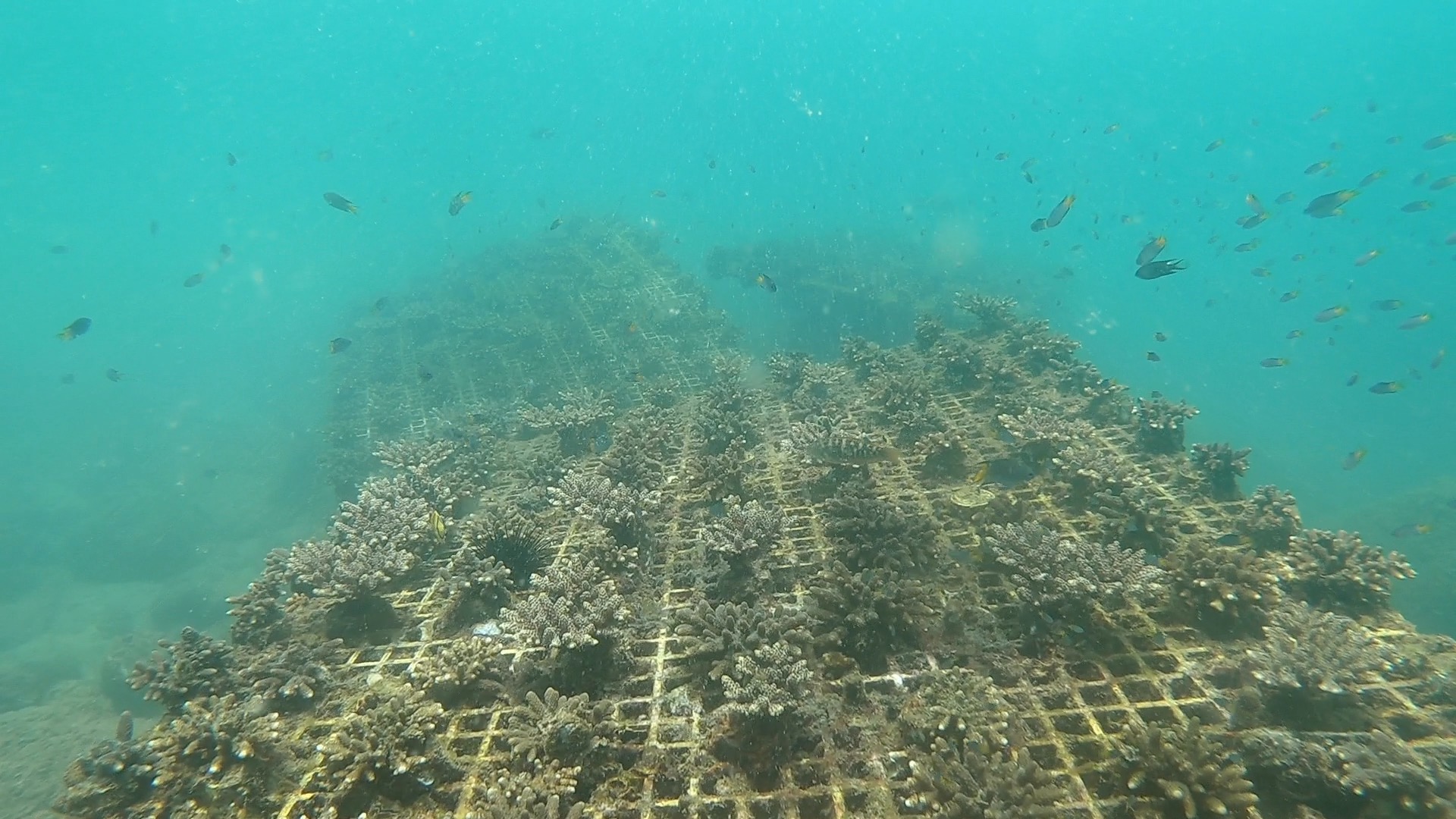 (The first video shows Liao Baolin planting corals in the sea, and the second video is 12 months after the planting.)

Still more to do

China is going to implement a technical guideline for marine ecological restoration on October 1 this year.

"When transplanting the corals, you cannot damage the original body, and the length of the coral branch you cut also has certain criteria," said Liao.

He thinks the guideline is timely, as more individuals, institutions and non-governmental organizations are involved in marine environment restoration, and it is a good chance to regulate and guide the repairing work as it requires professional knowledge and skills.

Despite planting corals since 2009, Liao said it would take generations of work until the coral reefs recover their glory in the early 1940s. For this to happen, Liao said the government will need to continue strengthening environmental protection and management and that researchers and scientists in different fields can work together to develop new technology. For ordinary citizens, Liao said regardless of whether they live inland or by the sea, adopting behaviors like cutting down on plastic waste and boosting energy conservation will positively affect the marine environment.