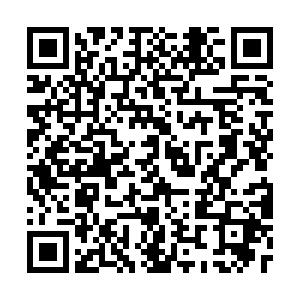 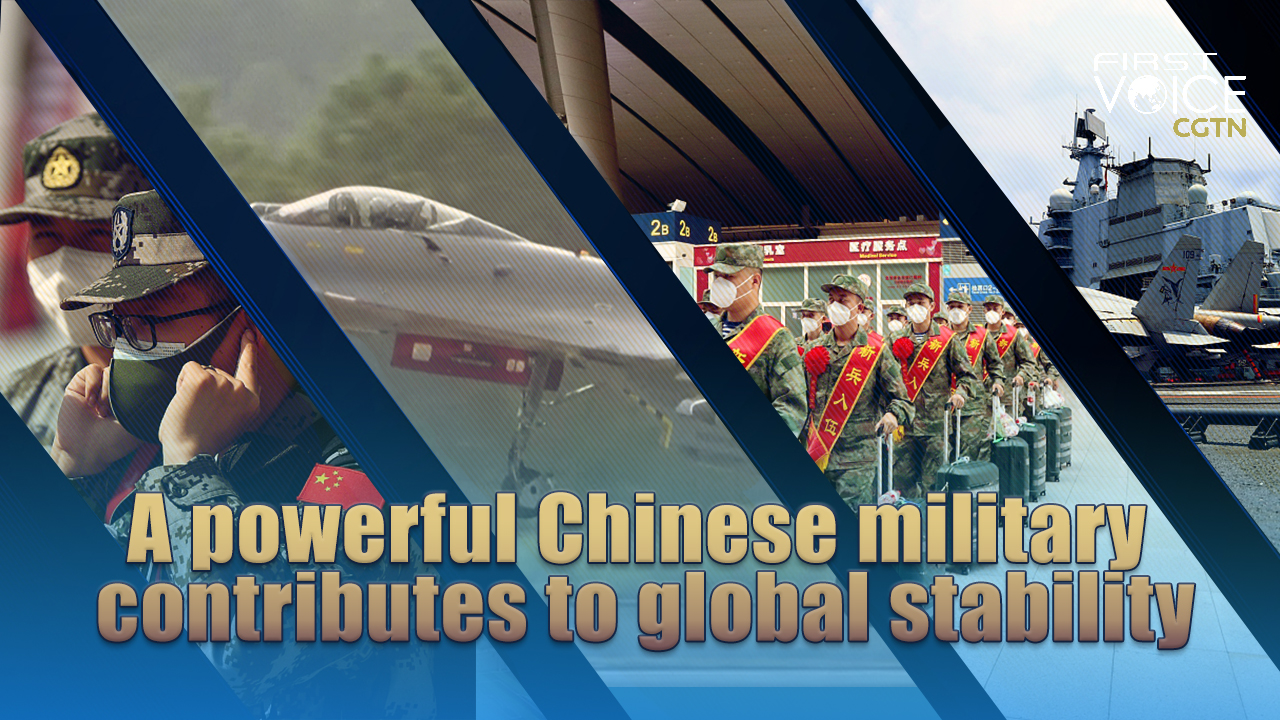 Editor's note: Over the past decade, China has made great accomplishments while navigating through a tumultuous global environment. As the 20th Communist Party of China National Congress approaches, CGTN First Voice presents a 10-part series titled "The China Path: A Panoramic Decoding" to take you through the landmarks and watershed events over the past 10 years and decode the secret of China's development. Part 8 features the development of China's military.

At the founding ceremony of the People's Republic of China in 1949, the weapons showcased were mainly made by other countries. The fly-by was completed by the same group of aircraft flying twice because there were simply not enough military planes. "What are we capable of making now?" Mao Zedong asked in 1954, "a car, a plane, a tank, a tractor, we can make none of these." In 2019, at the military parade commemorating the 70th anniversary of the PRC's founding, Beijing displayed a remarkable array of weapons that operated on land, sea and in the air, including those that were capable of mounting joint air defense barrages and the Dongfeng series strategic missiles. A total of 32 armament formations joined the parade, making it the largest of its kind in the nation's history, in terms not only of scale but also of the variety of weapons.

Over the course of a few decades, China's armed forces have transformed from a backward military that could barely stage a decent parade to one that is modernized and has made significant strides in all aspects of national defense. The People's Liberation Army is not only charged with the responsibility to defend China's homeland security but also plays a prominent role in safeguarding world peace in the age of globalization. For all the peace-loving countries, it is a reassuring force in the present-day turbulent global system.

A country needs powerful military to be strong and secure

Traditional Chinese wisdom holds that those who prefer to wage wars will perish, and those who forget wars will be in danger. China believes that a country needs a powerful military before it can truly be strong and secure and that China must build fortified national defense and a strong people's military commensurate with its international standing and its security and development interests. To view the necessity of China's military strengthening with a fair eye, one must understand its purpose. 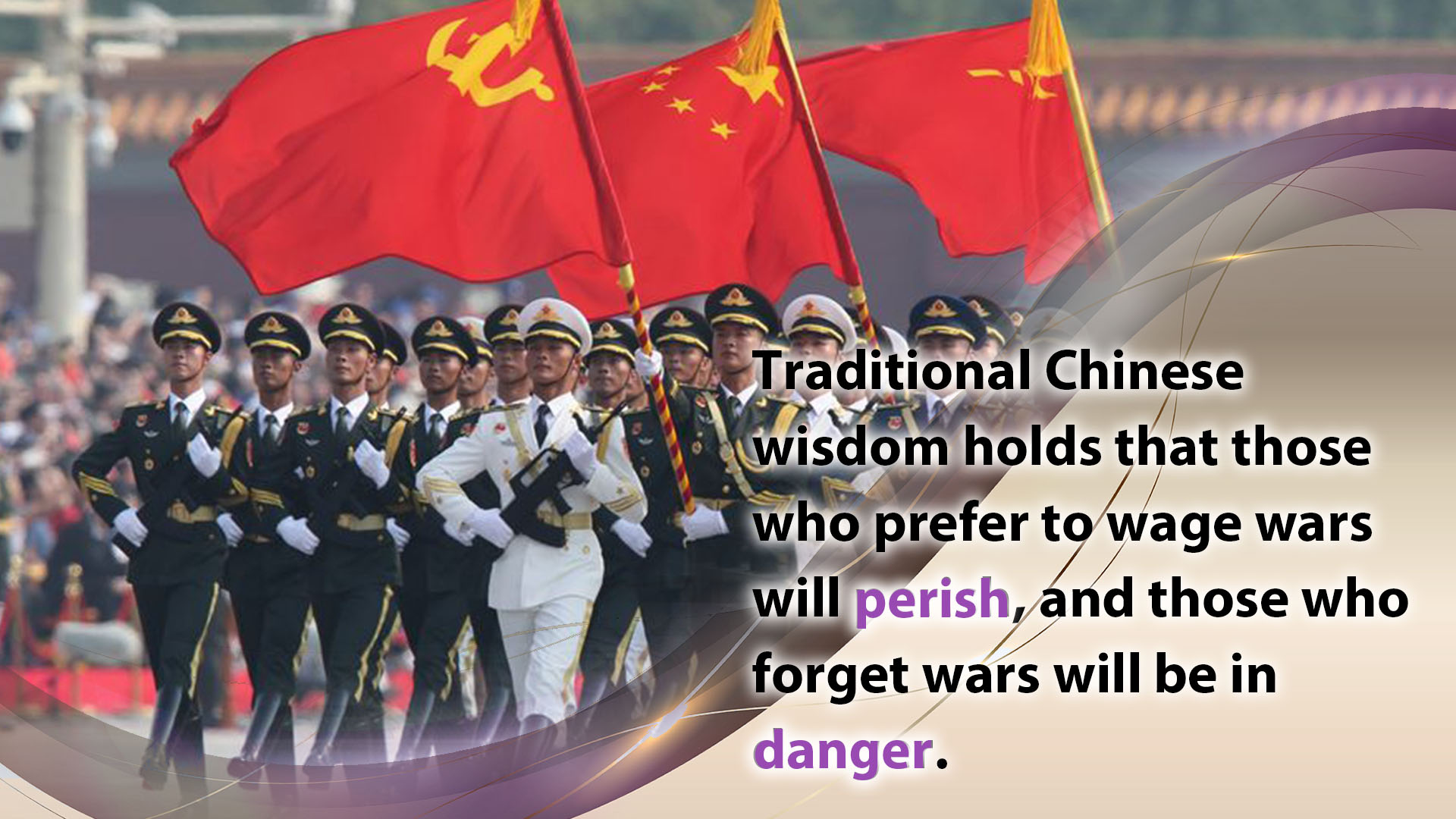 In 2021, Wu Qian, spokesperson of the People's Liberation Army and People's Armed Police Force delegation to the 4th session of the 13th National People's Congress (NPC), said that China's increased defense budget would be used mainly in four aspects: first, to ensure the initiation and implementation of major projects and key programs regarding army building in accordance with the "14th Five-Year Plan"; second, to accelerate the upgrading and promote further modernization of military weapons and equipment; third, to speed up the transformation of military training, build a new type of military personnel training system, and improve related conditions and supporting services; and fourth, to align military spending with China's social and economic development, boost the troops' welfare, and support primary-level military development. He noted that China's defense budget rise was only "compensatory" as it aimed to build a people's army that was compatible with China's international standing and capable of safeguarding the country's national security and development interests.

China's defense budget for 2022 is 1.45 trillion yuan (about $229 billion), which is a 7.1 percent year-on-year increase against 2021. Many western media outlets, while playing up China's military spending, are shying away from comparing it with historical figures. Since 2016, China's military budget growth has remained in the range of 6.6 percent and 8.1 percent, recording a seven-year average of 7.2 percent, while the 2022 figure falls in line with it. Moreover, against the backdrop of the COVID-19 pandemic, the 2020 and 2021 figures were both below 7 percent.

Although China is the world's second largest economy, its military spending has stood at a relatively low level in terms of its share in GDP (gross domestic product). According to statistics from the Stockholm International Peace Research Institute, China's defense expenditure accounted for 1.7 percent of its GDP, while for Saudi Arabia, the United States, India and the United Kingdom, the percentages were 8.4 percent, 3.7 percent, 2.9 percent and 2.2 percent respectively. The difference is more salient in regards to per capita terms. China has a population, which is four times that of the U.S., but its overall military expenditure is only a quarter of its American counterpart. The West chooses to turn a blind eye to this and to the fact that Western countries led by the U.S. are pushing up the share of their military spending in GDP.

China has also made concrete moves, including military downsizing, to show the world that the strengthening of China's armed forces serves the purpose of promoting world peace. The announcement made by Chinese President Xi Jinping at the commemoration of the 70th anniversary of the victory of the Chinese People's War of Resistance Against Japanese Aggression and the World Anti-Fascist War in 2015 to cut the number of its troops by 300,000 demonstrating the defensive nature of China's national defense policy and the country's resolve to protect world peace and regional stability. 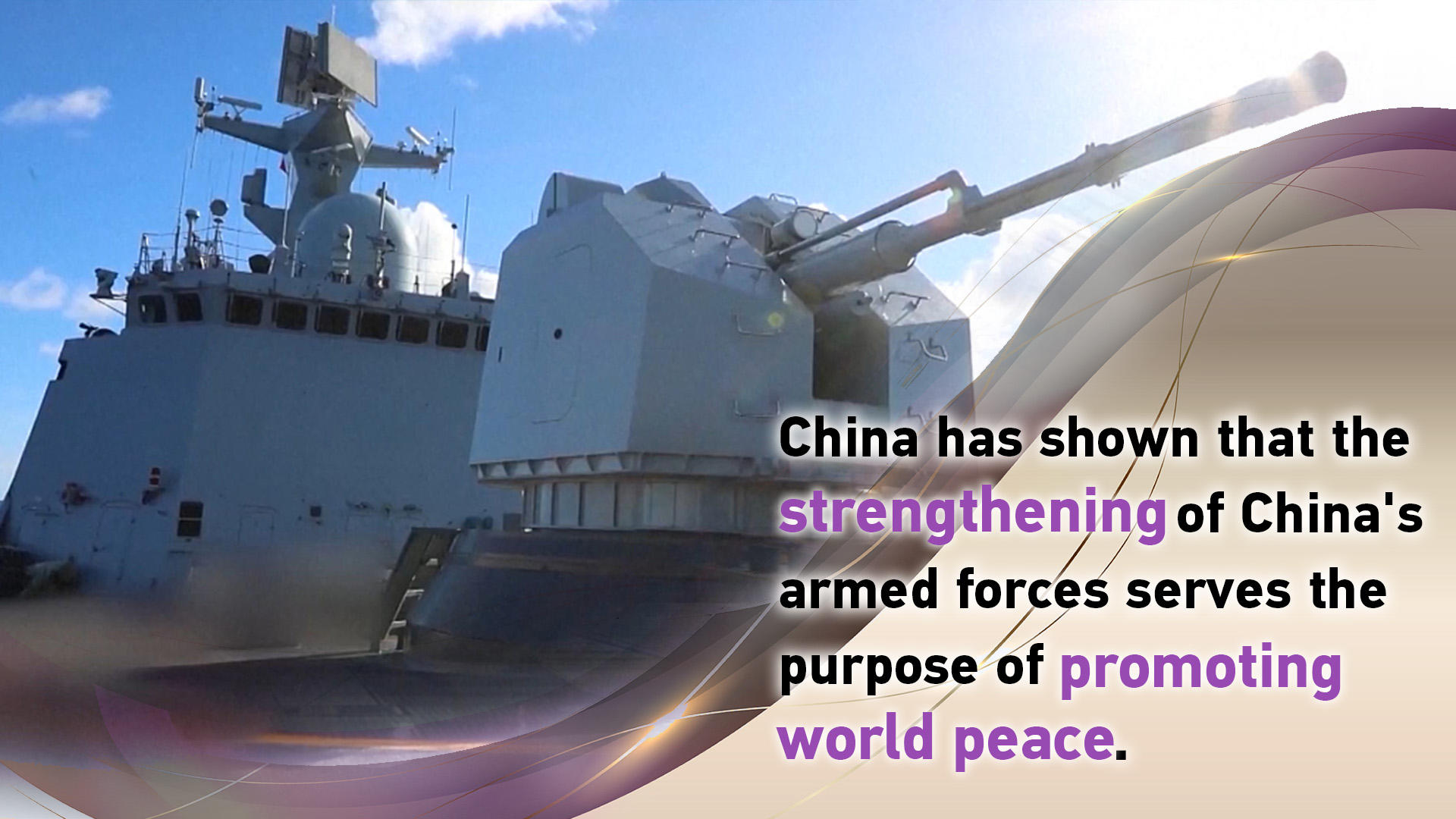 On March 27, 2014, while attending the commemorative meeting for the 50th anniversary of diplomatic relations between China and France in Paris, President Xi said, "the pursuit of the Chinese dream will bring to the world opportunities rather than threats, peace rather than turmoil, and progress rather than backwardness."

On July 14, 2022, the 2nd Chinese peacekeeping helicopter detachment to Abyei transported aviation kerosene and gasoline to designated locations in four sorties. Abyei, a disputed region between Sudan and South Sudan, is the destination where China delivered on its commitment of deploying its first helicopter detachment to UN peacekeeping operations in Africa. Since 2013, on top of its peacekeepers already serving on UN peacekeeping missions in engineer, medical and transport units, Beijing has dispatched guard contingents, infantry battalions and helicopter contingents to countries including Mali, South Sudan and Sudan. Meanwhile, China has more than 2,200 peacekeepers deployed on UN missions in seven mission areas and at the UN headquarters. The country has also completed its registration of a UN standby peacekeeping force comprising of 8,000 troops. The first "Shared Vision" International Peacekeeping Forum recently held by China, along with the previously held "Shared Destiny" practical force joint exercise on international peacekeeping and the "Shared Mission" joint command post exercise for UN peacekeeping missions, constitutes the "Shared" series, an international brand of peacekeeping-related events regularly held by the Chinese military. This will play a crucial role in UN peacekeeping efforts. 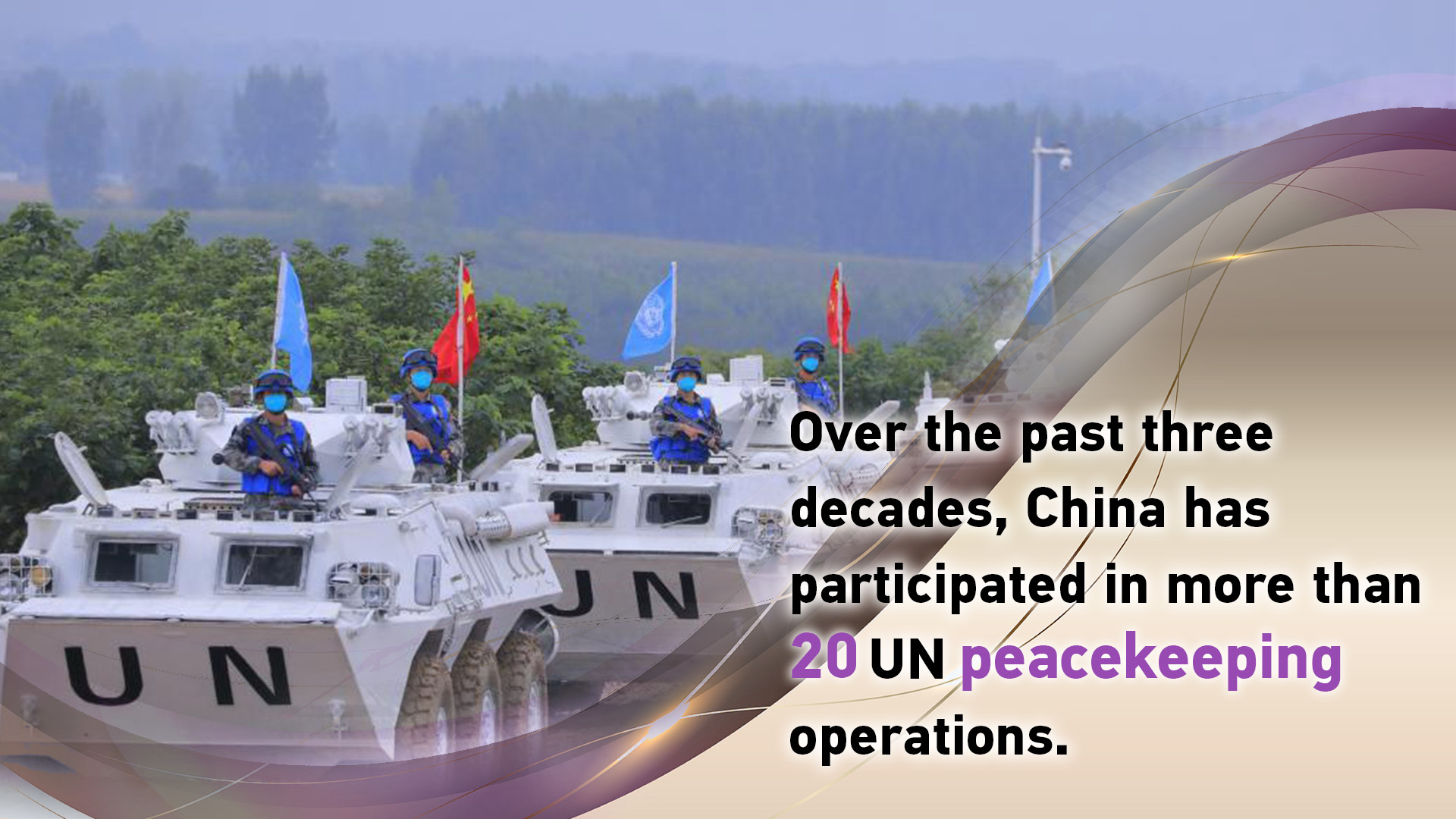 China is a major financial contributor to the UN peacekeeping budget and the biggest provider of troops among permanent members of the UN Security Council for the UN peacekeeping force. While providing the world with a greater diversity of public security goods, Beijing has also delivered on all its commitments to UN peacekeeping. Over the past three decades, China has participated in more than 20 UN peacekeeping operations. In maritime escort missions, humanitarian relief operations, anti-terrorist exercises and anti-pandemic cooperation, Chinese troops have fulfilled their obligations commensurate with China's global standing, repeatedly showing to the world that the Chinese army is a force of not only of power, but also of peace and civilization.

A more powerful Chinese military can make greater contributions to the preservation of world peace. In this day and age, peace and development stand at a critical historical juncture as the world heads into a new era of instabilities and transformations. The dream of the Chinese stands closely connected to the dreams of peoples across the globe. A peaceful, stable, unified and prosperous China presents opportunities and benefits for our world. Accordingly, Chinese troops will contribute significantly to world peace, shoulder more peacekeeping responsibilities and provide stronger support for building a community with a shared future for humanity.

(Contributed by An Shidong, Senior Fellow at the Taihe Institute and a senior military expert.)