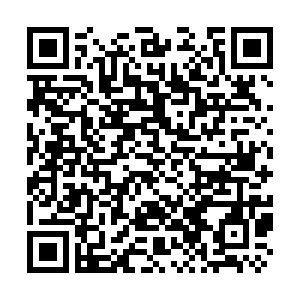 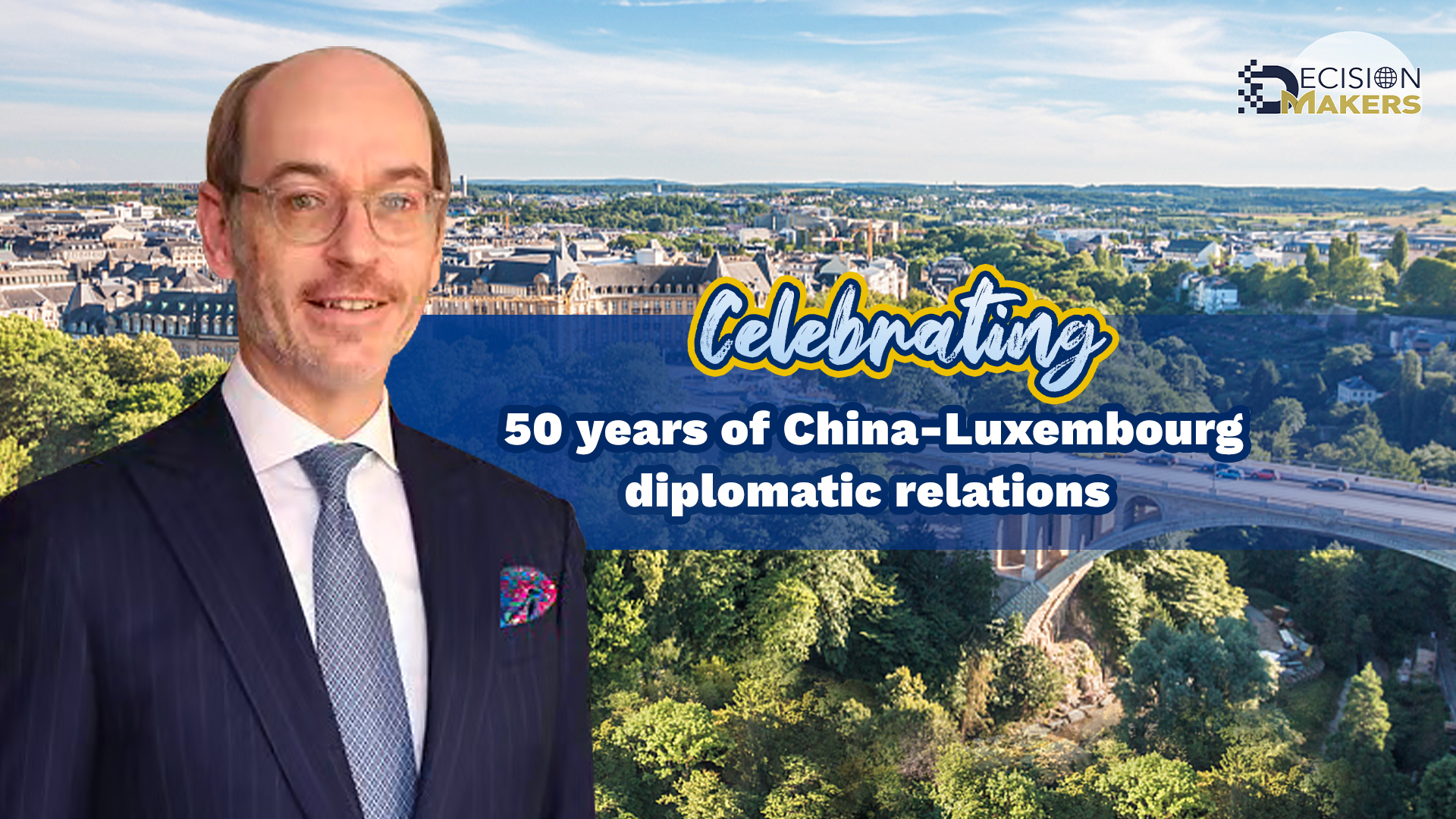 Editor's note: Decision Makers is a global platform for decision makers to share their insights on events shaping today's world. Marc Pierre Hubsch is Luxembourg's ambassador to China. The article reflects the author's views and not necessarily those of CGTN.

The celebration of the 50th anniversary of the bilateral diplomatic relations between Luxembourg and China gives us the opportunity to honor the past, celebrate the present and look ahead together. The relationship between our two countries is the most dynamic Luxembourg has outside the European Union. It is a strong and continuously evolving friendship. People like Adolphe Franck, who was the first foreigner to be given the title "Friendship Ambassador" in China, have significantly contributed to building this friendship. He had China and the Chinese people in his heart. As a railway employee and a member of the Luxembourg Communist Party, Franck visited China 58 times (his first trip was in 1952) and gained the trust and respect of the Chinese leadership and Chinese people.

Despite the geographical distance separating our two countries, and the fact that our countries have adopted different governance systems and followed their own specific development models that inevitably led to different perceptions, friendly exchanges between China and Luxembourg took place already at the end of the 19th century. At that time, a team of Luxembourg engineers, led by Eugene Ruppert, helped to develop the emerging Chinese steel industry in today's Chinese city of Wuhan. The local steel industry became a model for China. The spectacular Zhang Zhidong and Modern Industrial Museum in Wuhan illustrates this early period of our bilateral cooperation through a large collection of photographs, documents and authentic objects.

Since then, and during the last 50 years, our two countries have enjoyed fruitful economic exchanges in logistics, engineering and the steel industry, in finance and notably green finance where the Luxembourg Green Exchange, listing more than 50 percent of the green bonds issued worldwide, has proven on many occasions to be an innovative frontrunner. In 1979, the Bank of China established the first overseas branch in Luxembourg since the founding of the People's Republic of China. Since then, seven major Chinese banks have branches and subsidiaries with respective European headquarters in Luxembourg. Luxembourg is also the major country in which China has issued overseas green bonds. Luxembourg was the very first EU country to join the Asian Infrastructure Investment Bank (AIIB) and hosted in 2019 the first AIIB annual meeting outside Asia. 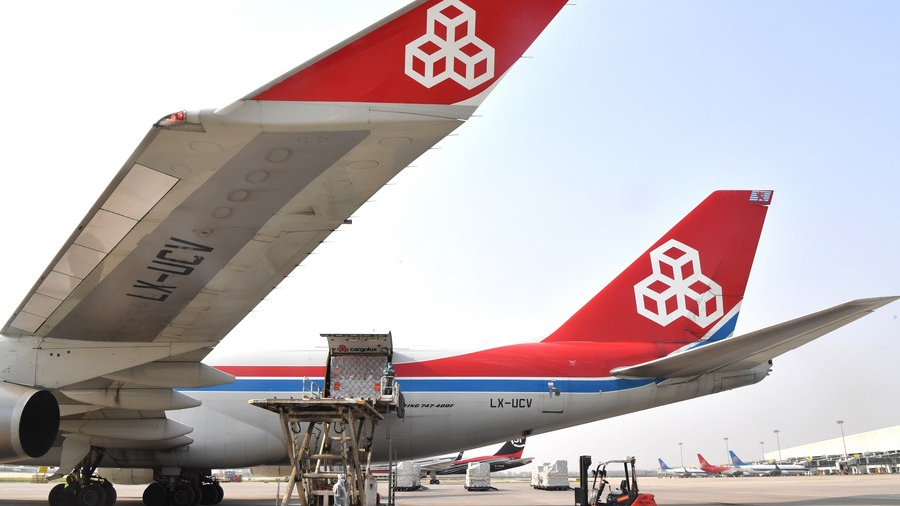 When His Royal Highness the Grand Duke Henri of Luxembourg – the first Head of State to arrive in China to attend the Beijing 2022 Olympic Winter Games – met with President Xi Jinping, both sides emphasized to enlarge and enhance the "Air Silk Road" of China-Luxembourg freight transport routes. The "Air Silk Road" between Zhengzhou and Luxembourg is a unique success story for the mutually beneficial implementation and further deepening of the Belt and Road Initiative, with our national cargo airline Cargolux operating more than 50 flights a week between China and Luxembourg. The "Air Silk Road" offers the framework to develop the so-called dual hub strategy, with a Luxembourg airport as a logistics center for Europe and America and a logistics center for the Asia Pacific region in Zhengzhou.

The construction of the "Air Silk Road" is guided by pragmatism; its impact is visible and tangible: After the outbreak of the COVID-19 pandemic, the airfreight connection between Zhengzhou and Luxembourg was a true lifeline between China and Europe, delivering urgently needed medical supplies.

Over the last four decades, China's leadership has experienced that the introduction of key market reforms and the implementation of opening-up policies are fundamental steps for ensuring a qualitative growth of the economy and for meeting the expectations of foreign investors in terms of the development potential of one of the world's largest economies. In addition to that, China's commitment to achieving its carbon neutral goals creates the needed momentum to speed up global green growth and to strengthen the dynamics of our joint efforts to tackle climate change. I stress joint efforts because, in a connected world, we have no other option but to work together to solve global existential threats such as climate change, biodiversity loss and environmental degradation.

The 2030 peak carbon emissions and 2060 carbon neutrality targets set off the low-carbon transition in full swing in China. In order to implement both objectives, a profound structural transformation is needed, not merely in terms of upgrading the economic structure and managing the energy transition, but, most notably, with a view of adopting coordinated measures to promote long-term, high-quality economic growth, social prosperity while at the same time protecting our environment.

Green finance will continue to be an important tool to achieve such a comprehensive transition. More climate-related financial products will be developed; corporate environmental disclosure needs to be improved; green financial standards will hopefully be further harmonized to use similar catalogues to mobilize green loans, green bonds and green funds; incentive and punishment policies and pilot zones will be further enhanced.

As the leading investment fund hub in Europe, Luxembourg is making a lasting impact in shifting more assets to green, socially responsible and sustainable investments and stands ready to further engage and develop its highly complementary cooperation with China in fields such as green economy, green finance and circular economy.

The November 8 inauguration of the China Cultural Center in Luxembourg, is another milestone in terms of enriching and deepening the relationship between Luxembourg and China. As a platform for cultural exchanges, the China Cultural Center will offer many opportunities to discover the diversity and richness of Chinese culture while encouraging more people-to-people exchanges.

We should celebrate what we achieved together while remaining humble and sparing no efforts in further deepening our partnership.