More than bites and boats: Three things you might not know about the Dragon Boat Festival
Hong Yaobin 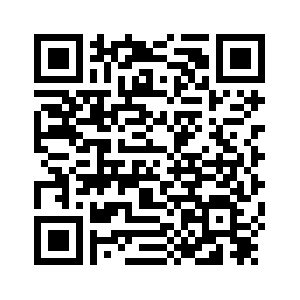 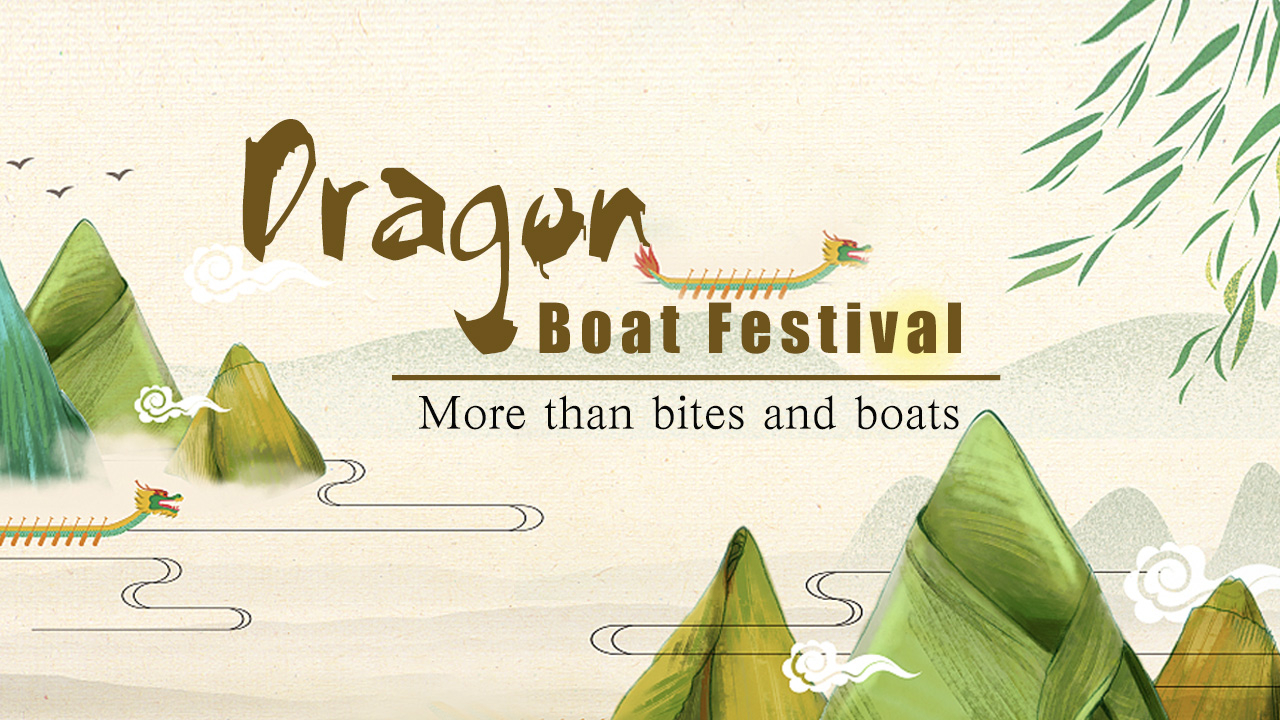 An atmosphere of revelry is in the air in China as the Dragon Boat Festival celebration is in full swing across the country.
The centuries-old festival, as its name implies, observes exciting dragon boat races getting underway accompanied by the thundering sound of gongs and drums in many places.
The zongzi – glutinous rice dumplings with a variety of delicious fillings – is universally regarded as the centerpiece of the festival, which is considered as one of the four traditional Chinese festivals of greatest importance. 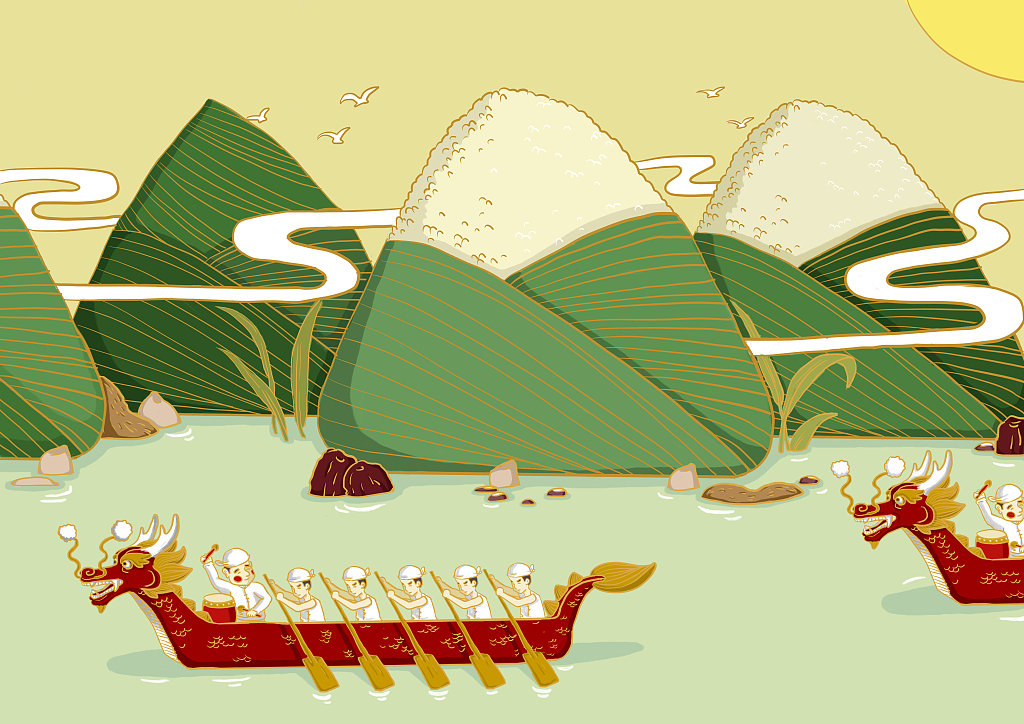 Qu Yuan is not the only person commemorated 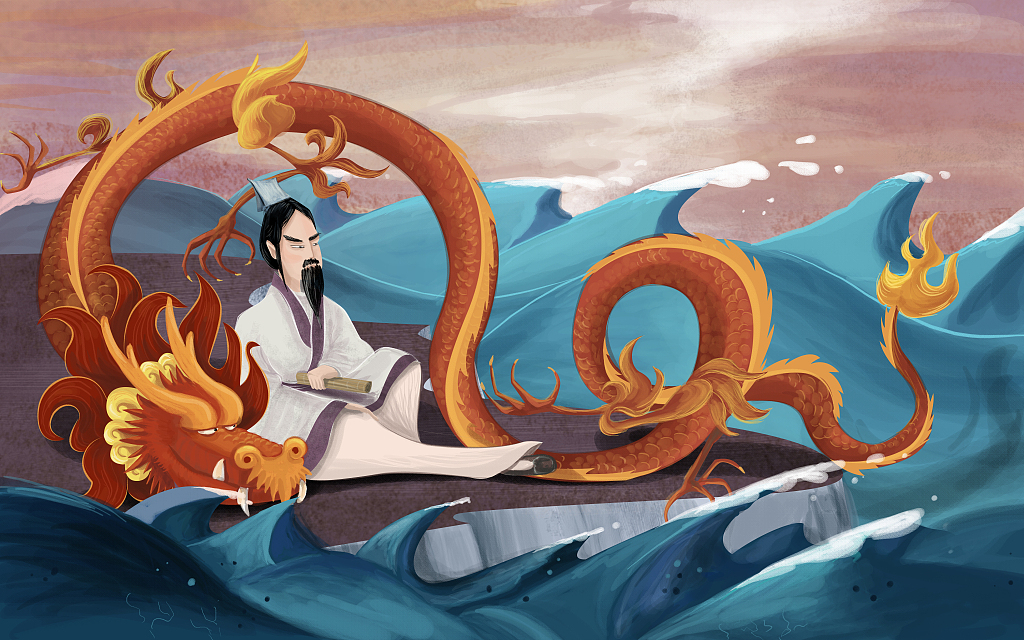 The roots of the Dragon Boat Festival are most often traced back to the death of Chinese poet Qu Yuan (340–278 BC), who was a minister of the ancient state of Chu during the Warring States Period of the Zhou Dynasty (1046–256 BC).
It is said that local people raced out in their boats to save Qu, who committed suicide by drowning himself in the Miluo River after his country's capital was captured by another powerful state – this is widely believed as the origin of the best known festive tradition of boat races.
Despite honoring the talented patriotic poet, the annual festival has various meanings for Chinese people living in different places.
For example, Wu Zixu, another politician who lived in the Spring and Autumn Period (722–481 BC) – some 200 years earlier than Qu's era – is also remembered in connection to a distinct origin of the festival. 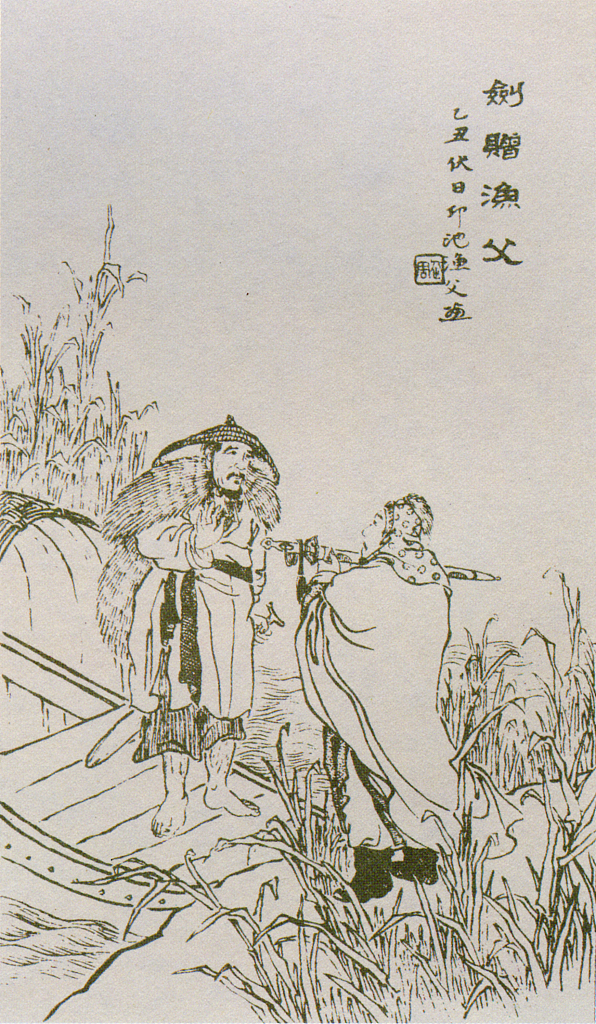 A painting depicts Wu Zixu and a fisherman during his exile. /VCG Photo

A painting depicts Wu Zixu and a fisherman during his exile. /VCG Photo

Wu was a general of the Wu Kingdom, who made numerous contributions to his country. For instance, it is said that Wu helped establish the ancient city of Suzhou, in east China's Jiangsu Province.
However, he was forced to kill himself by the fatuous king for his honesty annoyed the ruler. After his death, Wu became known as a model of loyalty.
People living in eastern China such as in Suzhou commemorate him today during the festival and worship him as a water divinity as his body was thrown into the river on the fifth day of the fifth month. 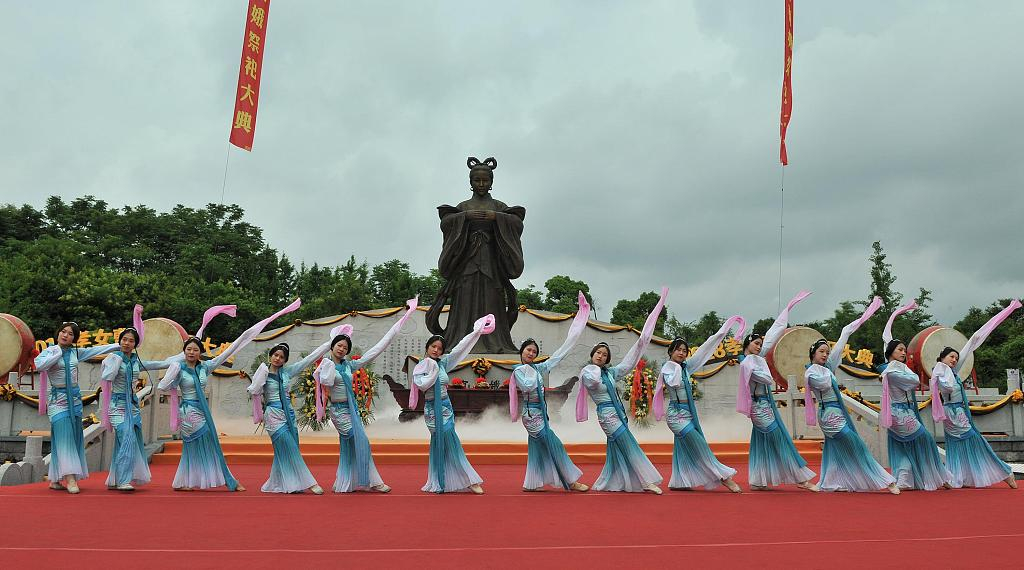 In a country of Confucian tradition, Chinese have long regarded filial piety as the source of all virtue. Cao E (AD 130–144) was considered a model of filial piety.
Cao's father accidentally fell into the river when he was presiding over a ceremony commemorating Wu Zixu, and Cao spent three days searching for her father to no avail. Later, she and her father were both found dead in the water.
Local people then built a temple in honor of her in Shaoxing in east China's Zhejiang Province. Today, people living in Shaoxing and cities nearby including Ningbo and Zhoushan still commemorate the young girl and her sacrifice for filial piety during the festival with her portrait painting hanging up on the racing boats. 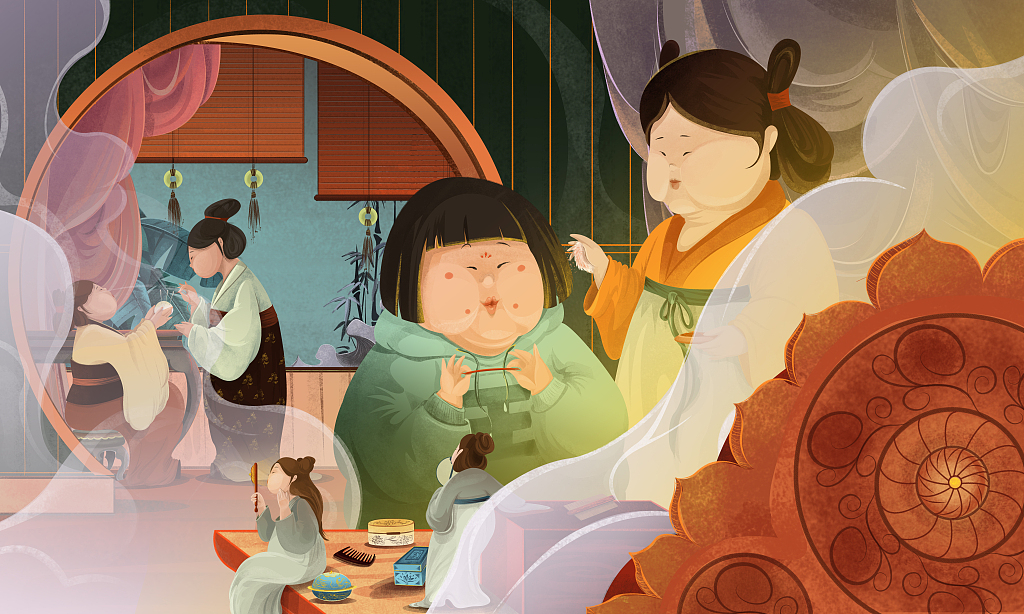 With more than 2,000 years of history, the Dragon Boat Festival embraces a variety of names in different places. It is fair to say that it is a traditional Chinese festival with the most titles.
With the Chinese official name of "Duanwu" in Mandarin, it is known as the Tuen Ng Festival for its Cantonese pronunciation in China's Hong Kong Special Administrative Region (SAR) and Macao SAR, as well as in Singapore and Malaysia.
It is also a significant traditional holiday in the Korean and Japanese cultures and called "Dano" and "Tango no sekku" respectively.
In addition to various modern names, the festival has been given numerous titles marked with different traditions in ancient times. 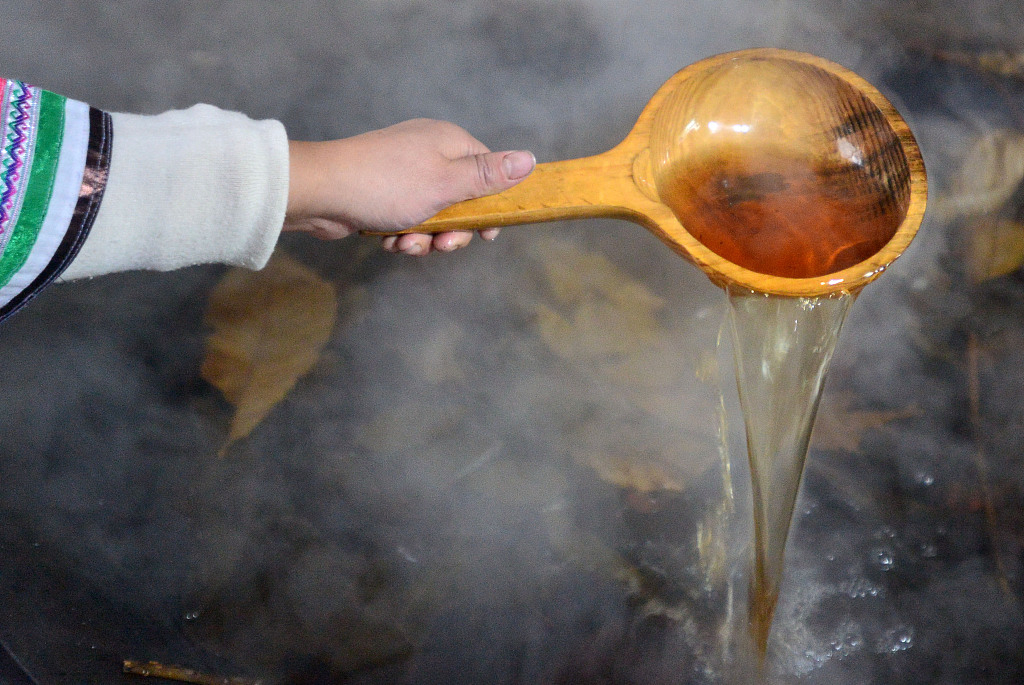 The festival is regarded as the best time to take an herbal bath. /VCG Photo

The festival is regarded as the best time to take an herbal bath. /VCG Photo

The festival traditionally was well known as "Daughters' Day" in northern China as young girls would wear wormwood leaves to protect themselves against the evil and the mosquito, and married women returned home to spend the holiday with their parents.
In Chinese folklore, it is believed that many herbs would have the strongest positive effects on our bodies if they were used during this period of time.
Many would prepare natural herbs and have a medicated bathing on the day of Duanwu. Thus the festival was also named "Herbal Bath Day."

There's much more other than festivity 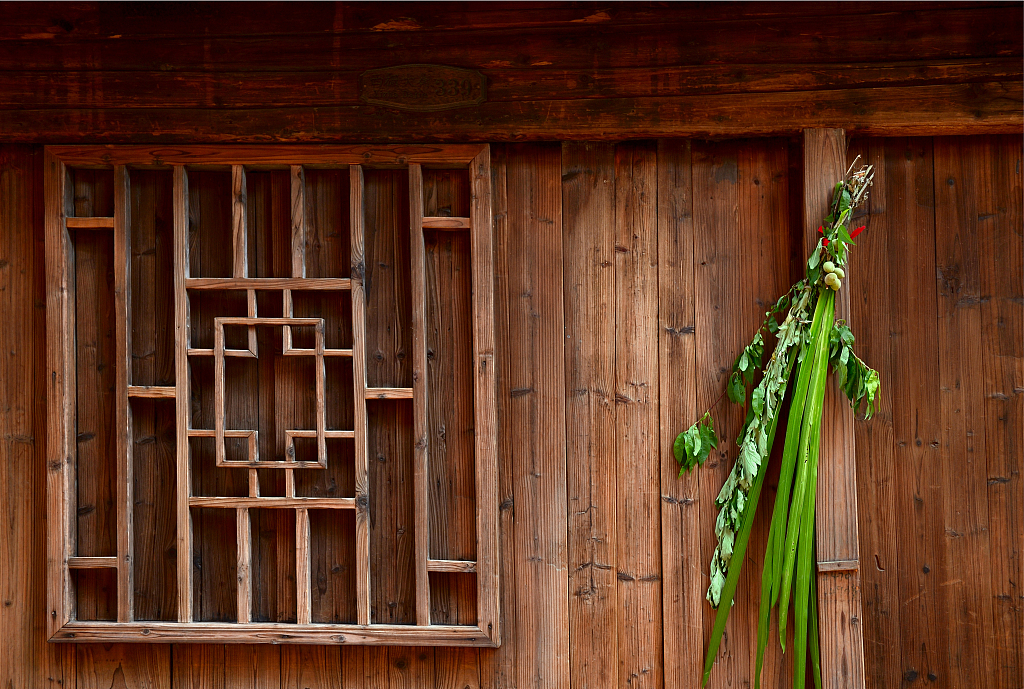 People put calamus and wormwood leaves on the doors and windows to repel insects, flies and fleas from the house. /VCG Photo

People put calamus and wormwood leaves on the doors and windows to repel insects, flies and fleas from the house. /VCG Photo

The festival actually is not just about savoring zongzi and boat racing. In traditional Chinese culture, this period of time saw the annual peak of the evil energies with the increasing summer heat and poisonous insects.
The festival thus observes many traditions that are conducted to ward off the evil, including putting calamus and wormwood leaves on the doors and windows to repel insects, flies and fleas from the house.
Some popular traditions such as wearing five-color threads, hanging silk sachets and painting foreheads with realgar wine, are also believed to dispel evil, and bring health and fortune to the family, especially the children. 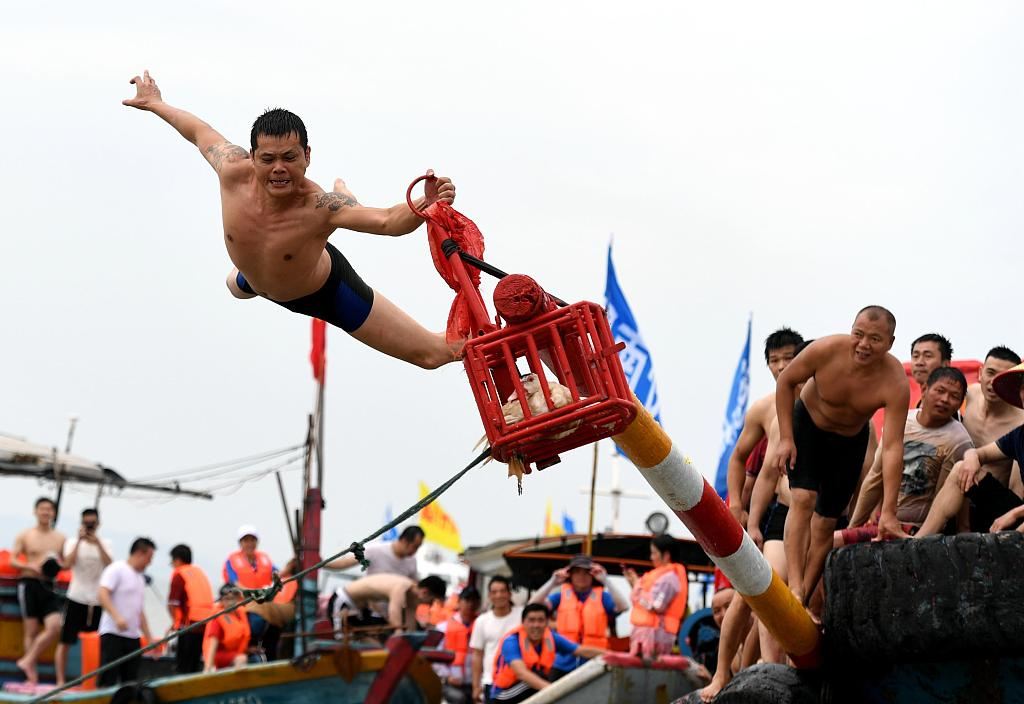 In some coastal areas in south and east China, people prepare offerings and hold worship ceremony before the dragon boat races begin to pray for safe voyages and peaceful life during the upcoming typhoon season in summer.
Duck catching contests are held in Fujian Province as a tradition to showcase personal prowess and swimming skills, which is said to be a special way to train the navy soldiers in ancient times.
In Guangdong Province, children are encouraged to jump into the pool and play in the water with their parents as they believe the so-called "dragon boat water" will bring more blessings.
Video by Wang Zengzheng
Cover image by Jia Jieqiong