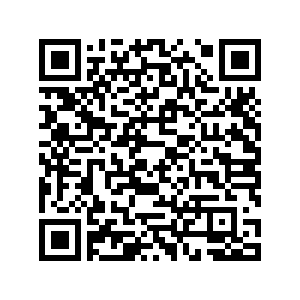 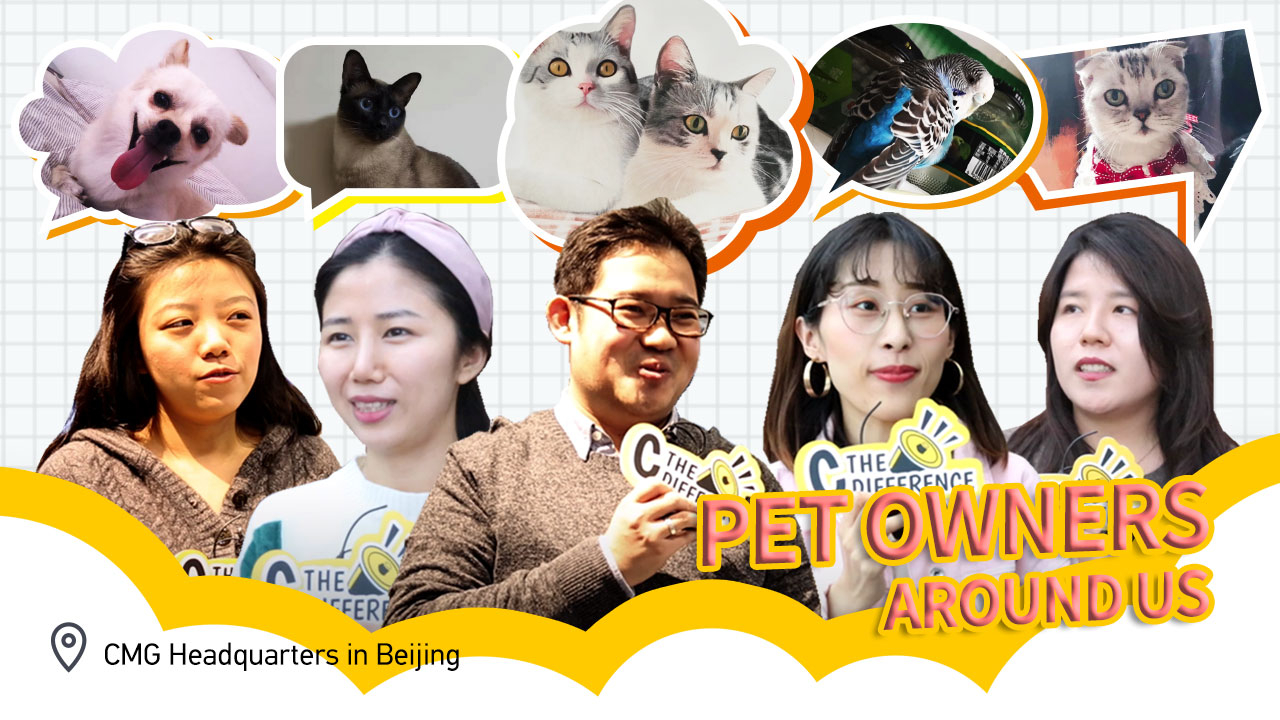 Before millions of Chinese embark on their journey to reunite with family for Spring Festival, many now have a new worry on their mind: How to care for their pets?

Some pet owners in big cities ask local friends or paid pet sitters for temporary care, while others turn to pet hotels. However as Spring Festival approaches, they usually find the nearby pet hotels either booked out or with skyrocketing prices.

This tells just one story about China's burgeoning pet industry.

The number of dogs and cats, the most commonly kept pets in Chinese cities, reached 99.15 million last year, according to a white paper published by online pet forum goumin.com.

The Chinese Pet Industry White Paper said that dog and cat owners spent a staggering 202 billion yuan (29 billion U.S. dollars) in 2019, an increase of 18.5 percent from the previous year. 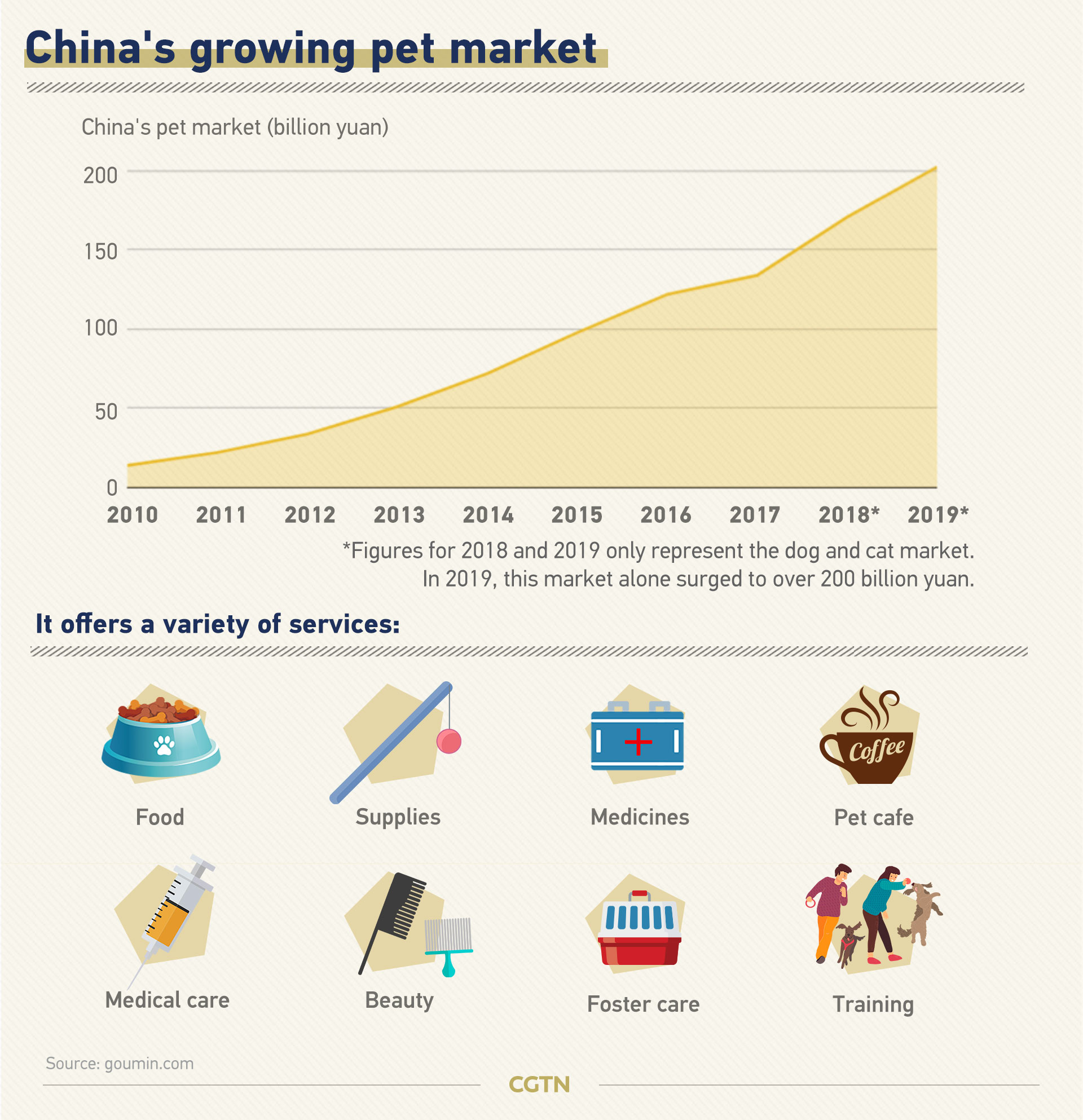 The compound growth rate of China's pet industry was 49.1 percent from 2010 to 2016, the fastest among all industries, according to media reports citing National Bureau of Statistics (NBS) data.

On Alibaba's Singles' Day shopping festival, the world's biggest online shopping event held on November 11, Chinese pet owners bought over 14,000 tons of cat food and 18,000 tons of dog food. At one point during the event, pet food was the top selling imported product – surpassing even imported milk powder for infants.

But spending on food could be easily eclipsed by the cost of medical treatment when beloved pets get sick, according to several Beijing pet owners interviewed by CGTN, who spent a huge amount of money on curing their ill pets last year.

There are also increasingly more owners willing to splurge on a new array of pet services such as pet foster care, training, beauty, photography and pet funerals, in addition to basic needs such as bath and medical care. 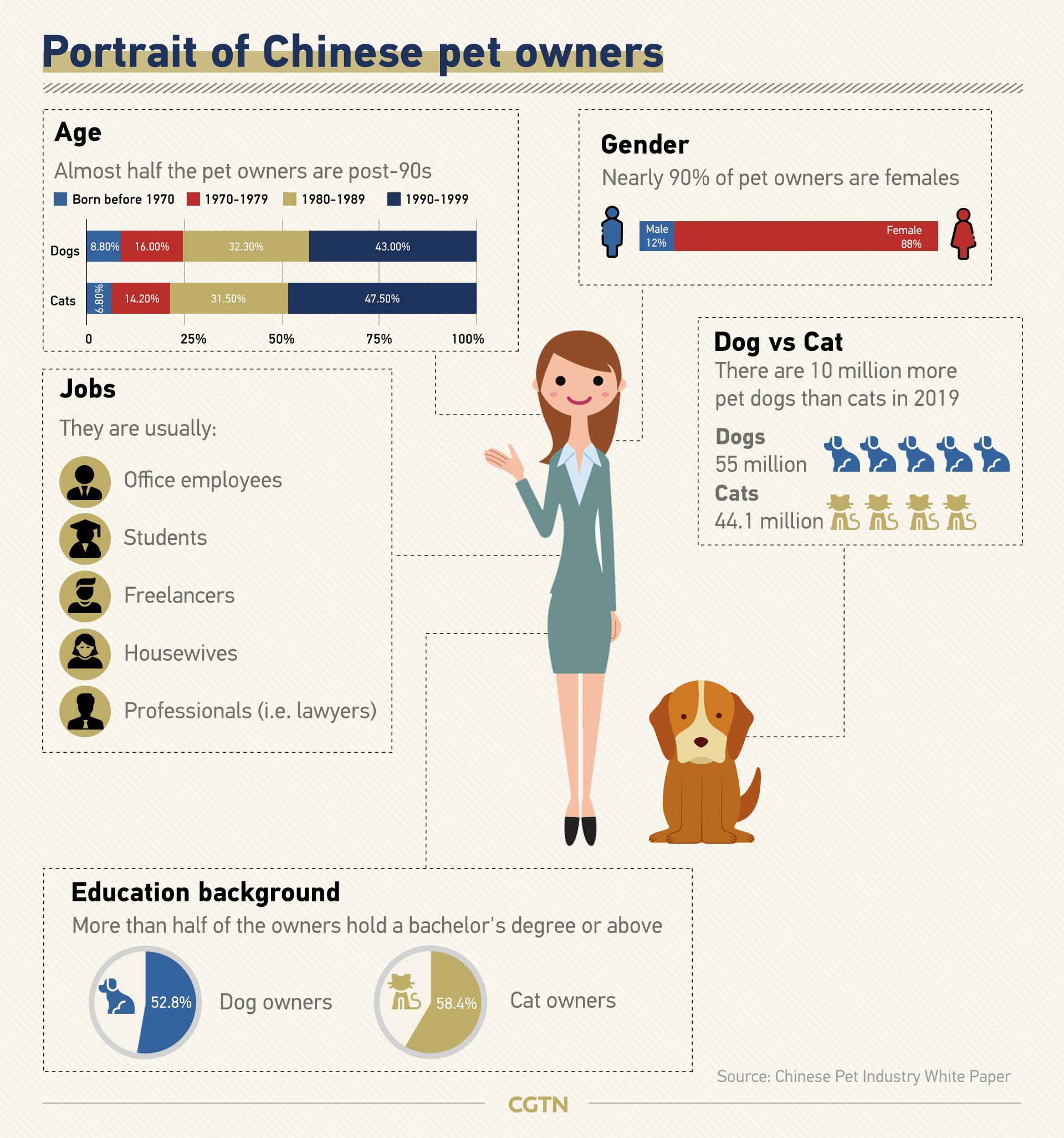 Who pays for pets?

According to goumin.com stats, nearly 90 percent of the dog and cat owners are women, and half have a bachelor's degree or above. The majority of Chinese pet owners belong to the post-1980 or post-1990 generations, who are now in their 20s or 30s.

Shanghai, Beijing, Xi'an and Chengdu – cities with comparatively high dispensable incomes are the cities with highest expenditure on pets. Owners living in these four cities spent 48.6 billion yuan on their fluffy friends last year, according to the pet industry report.

Nearly 60 percent of owners treat their pets as their kids, according to the report. Many also say that pets are child, friend and family member all rolled into one. 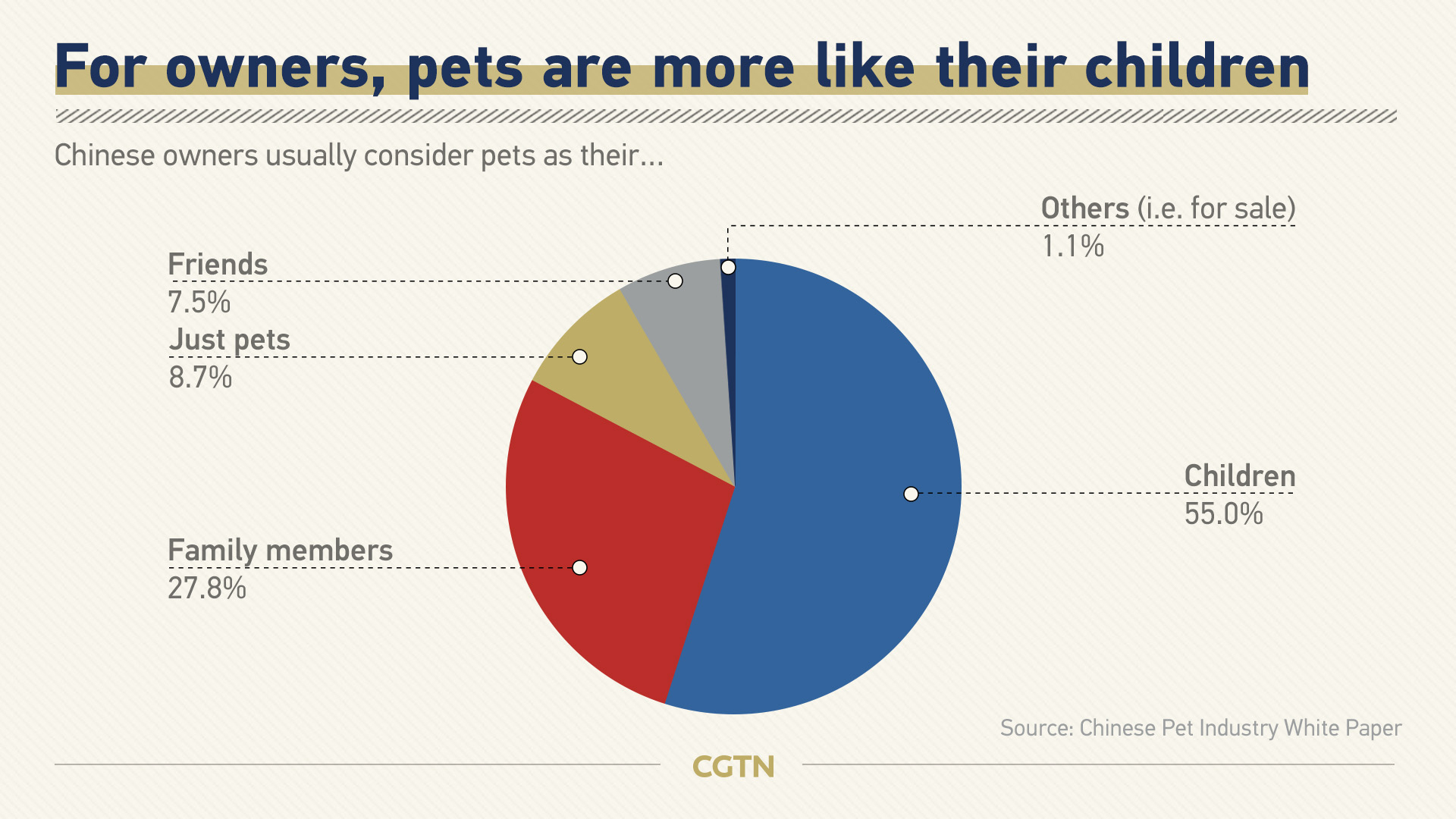 The surge in pet pampering is largely attributed to China's growing wealth.

The country's GDP per capita has passed the threshold of 10,000 U.S. dollars, according to official data released last week. As Chinese citizens become wealthier, pet ownership is on the rise.

Apart from a love of animals, a want of companionship is another major reason behind rising pet ownership. About one in five pet owners said they raised pets for mental support, according to goumin.com data in 2018.

China's aging population, falling birthrate and growing trend of singlehood have unleashed an enormous demand for pet pampering that can help ease loneliness and bring fun to life. 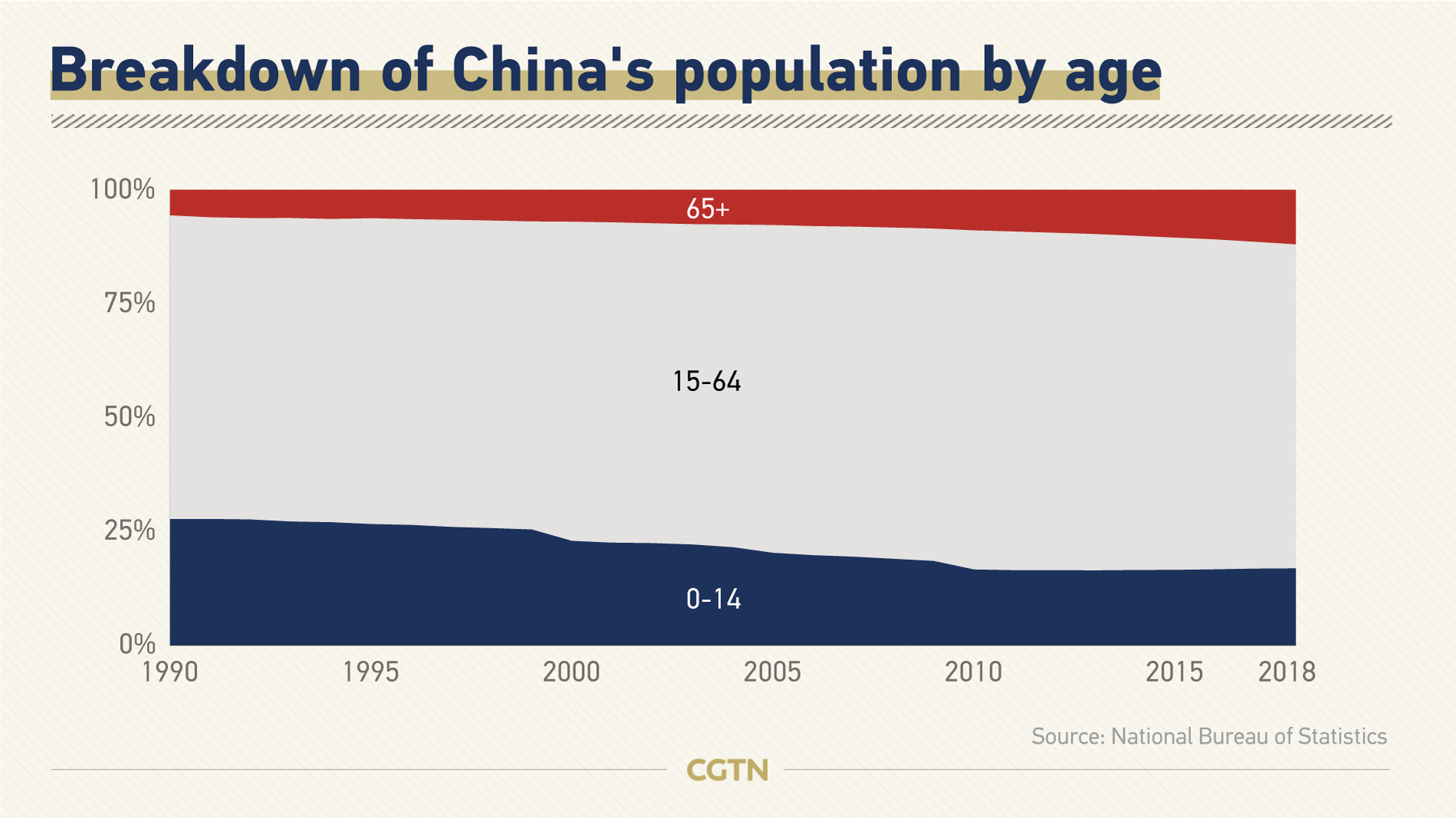 A cat owner now working in Beijing said: "When I go home every night, I can always hear my kitten meowing inside or scratching as I knock or unlock the door. It's an expression of 'can't wait to see you' (and) really makes me feel like returning to my own home, which is very heart-warming."