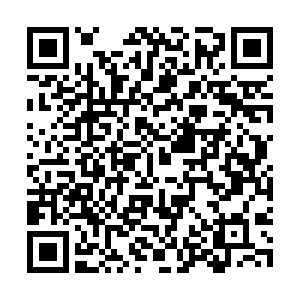 The COVID-19 outbreak in China was a side issue in the build-up to November's elections in the United States through January and February, occasionally mentioned deep into an interview but largely overlooked in favor of the horse race, healthcare and Donald Trump's impeachment.

That's now changed. The U.S. faces a major public health crisis which is going to have major practical and political consequences for the campaigns. The coronavirus is the first question and the dominant issue.

Here are four ways the outbreak is likely to impact the election.

1. Leadership in a crisis

The spread of the virus in the U.S. has shone a light on the Trump administration's ability to handle a crisis not of its own making.

Voters will judge how well it has responded, but there's no doubt basic competency now matters more than ever.

"This is a massive government mobilization, that you need a real government to handle," Andrew Cuomo, the New York governor, said on CNN this week. "This is not political. You're not going to do this on Twitter. This is government baby, this is what it's about." 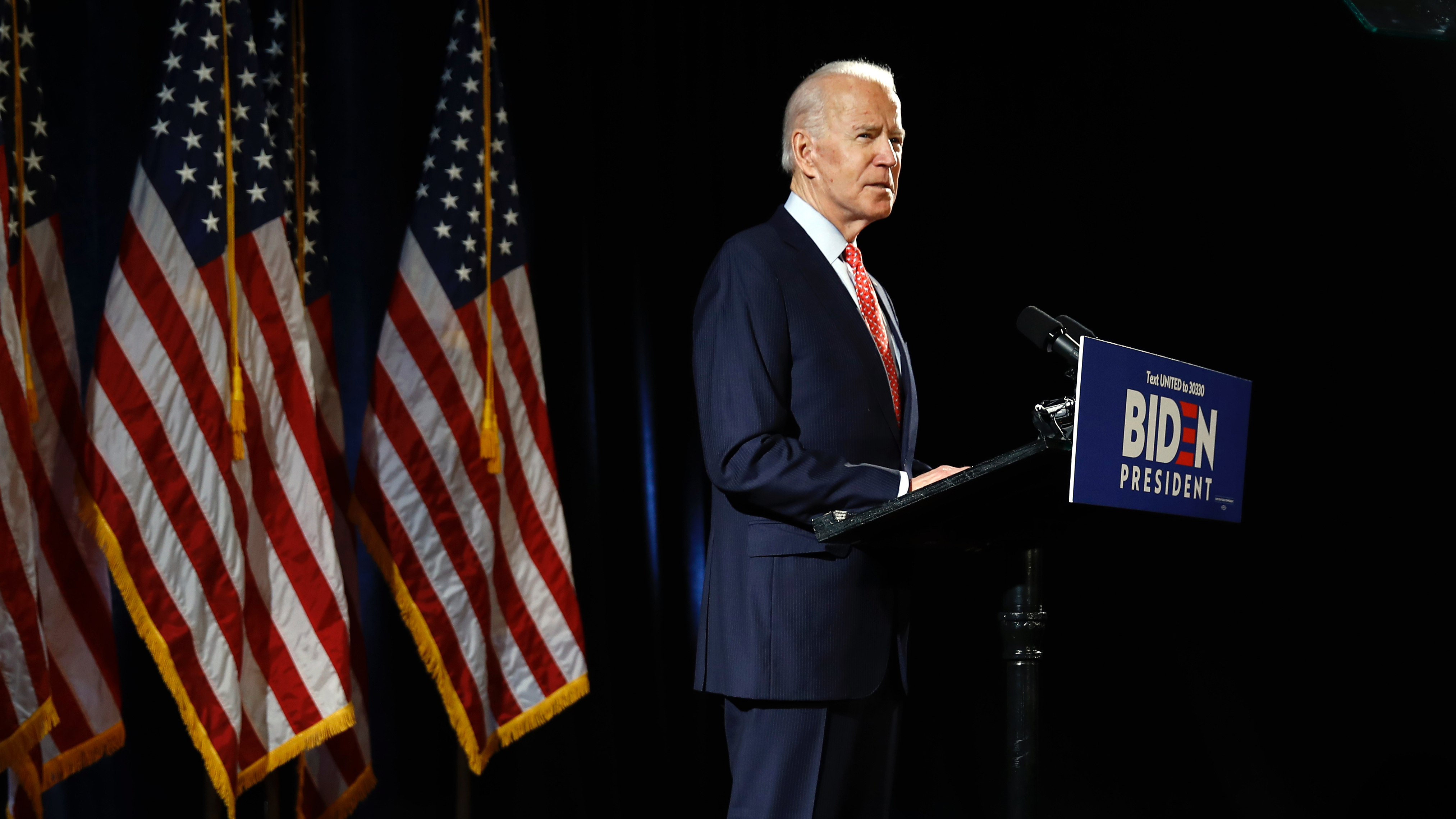 No one knows how the situation will look in November. The virus may or may not be contained, but its consequences, social and economic, are likely to leave deep scars.

Trump has the real world test now, while Joe Biden, who has announced a "Public Health Advisory Committee" during a presidential-style speech on Thursday, and Bernie Sanders are trying to convince the public they would provide better leadership at a tumultuous time.

Biden has already laid out a plan to handle the crisis, including emergency paid sick leave for workers and free testing for the virus. Trump has been criticized for the slow roll-out of mass testing. 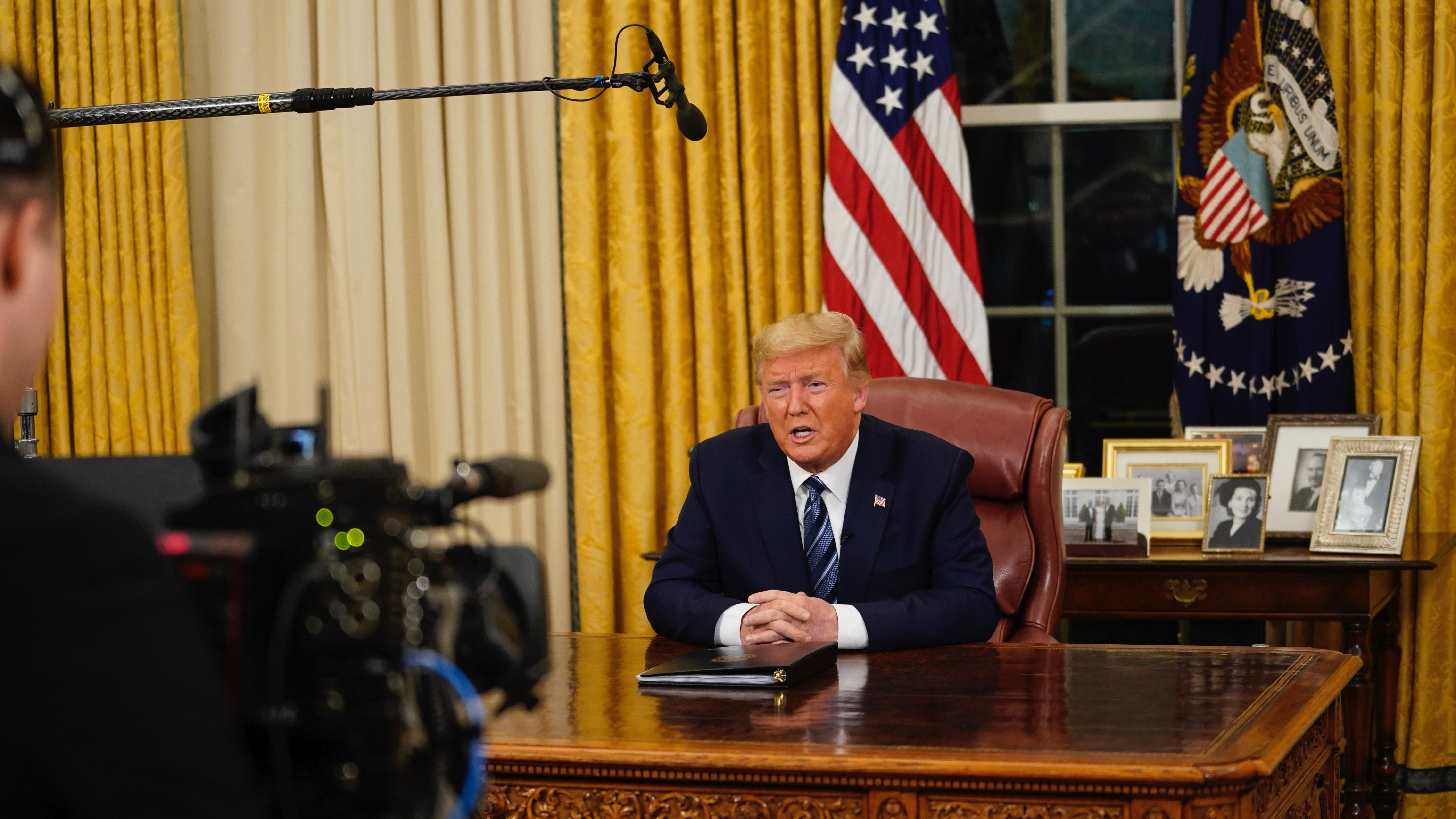 President Donald Trump addresses the nation from the Oval Office at the White House about the coronavirus, Washington, DC, March, 11, 2020. /AP

President Donald Trump addresses the nation from the Oval Office at the White House about the coronavirus, Washington, DC, March, 11, 2020. /AP

A Quinnipiac poll released on March 9 shows both Biden and Sanders beating Trump on the question of who would do a better job handling a crisis: Biden 56-40, Sanders 50-44.

"Perhaps most troubling for the Trump camp in these numbers is the comparative assessment of which candidate can handle a crisis: it is Biden hands down," Quinnipiac University Poll Analyst Tim Malloy said.

"Couple that with an approval rating frozen in the low forties and comparatively terrible numbers on leadership, honesty, and empathy for fellow Americans, and team Trump has a formidable fight ahead."

Sanders and Biden have canceled rallies since Tuesday, and Trump has now given in to the inevitable and agreed to postpone planned events.

Handshaking and speeches to excited supporters give campaigns momentum, buy free airtime, allow for data collection and can enthuse the candidates themselves — particularly in the case of Trump.

According to Rahm Emanuel, the former Chicago mayor and chief of staff to Barack Obama, the inability to feed off a crowd is going to test the president. 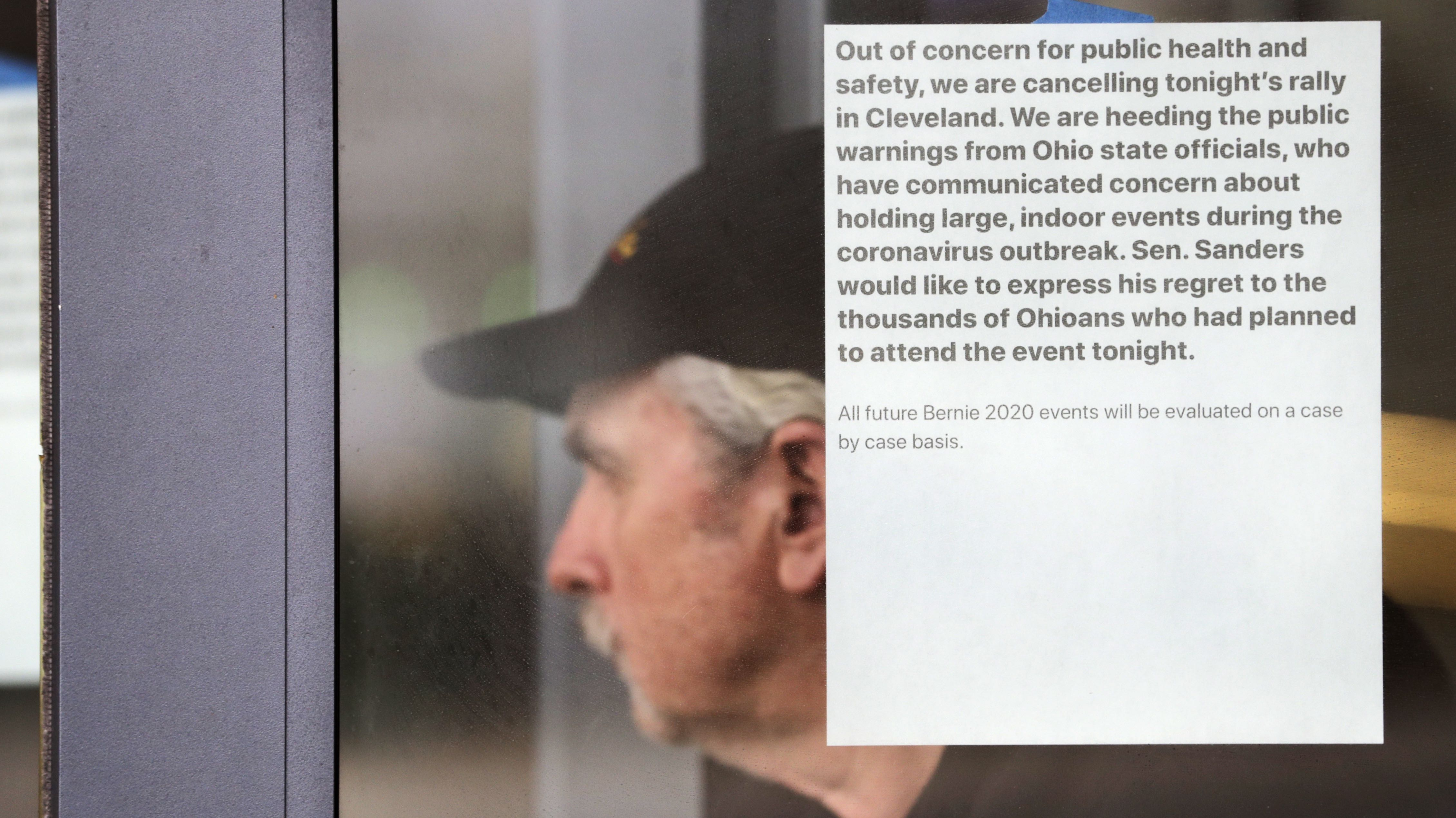 A man walks out of the Huntington Convention Center where Bernie Sanders cancelled a campaign rally, Cleveland, Ohio, March 10, 2020. /AP

A man walks out of the Huntington Convention Center where Bernie Sanders cancelled a campaign rally, Cleveland, Ohio, March 10, 2020. /AP

For the Democrats, at this stage, it's perhaps less of an issue, though the party needs to energize supporters to get out the vote and keep money rolling in as November nears.

Biden will hold virtual events in Chicago and Miami ahead of Tuesday's primaries, which could cement his status as the prohibitive nominee. Both the Biden and Sanders campaigns have ordered staff to work from home.

And are conventions, the mass party gathering scheduled in July for the Democrats and August for the Republicans, going to have to be virtual too?

The norms are over — and the online campaign is going to dominate, raising a whole new set of questions about disinformation and interference.

Schools are closing, the NBA is suspended. Is it safe to go to a polling station and vote? Will election clerks want to turn up?

Polling places for Tuesday's primaries are rapidly being relocated from planned locations in a bid to protect older people. All polling places at nursing homes in Ohio have been moved. 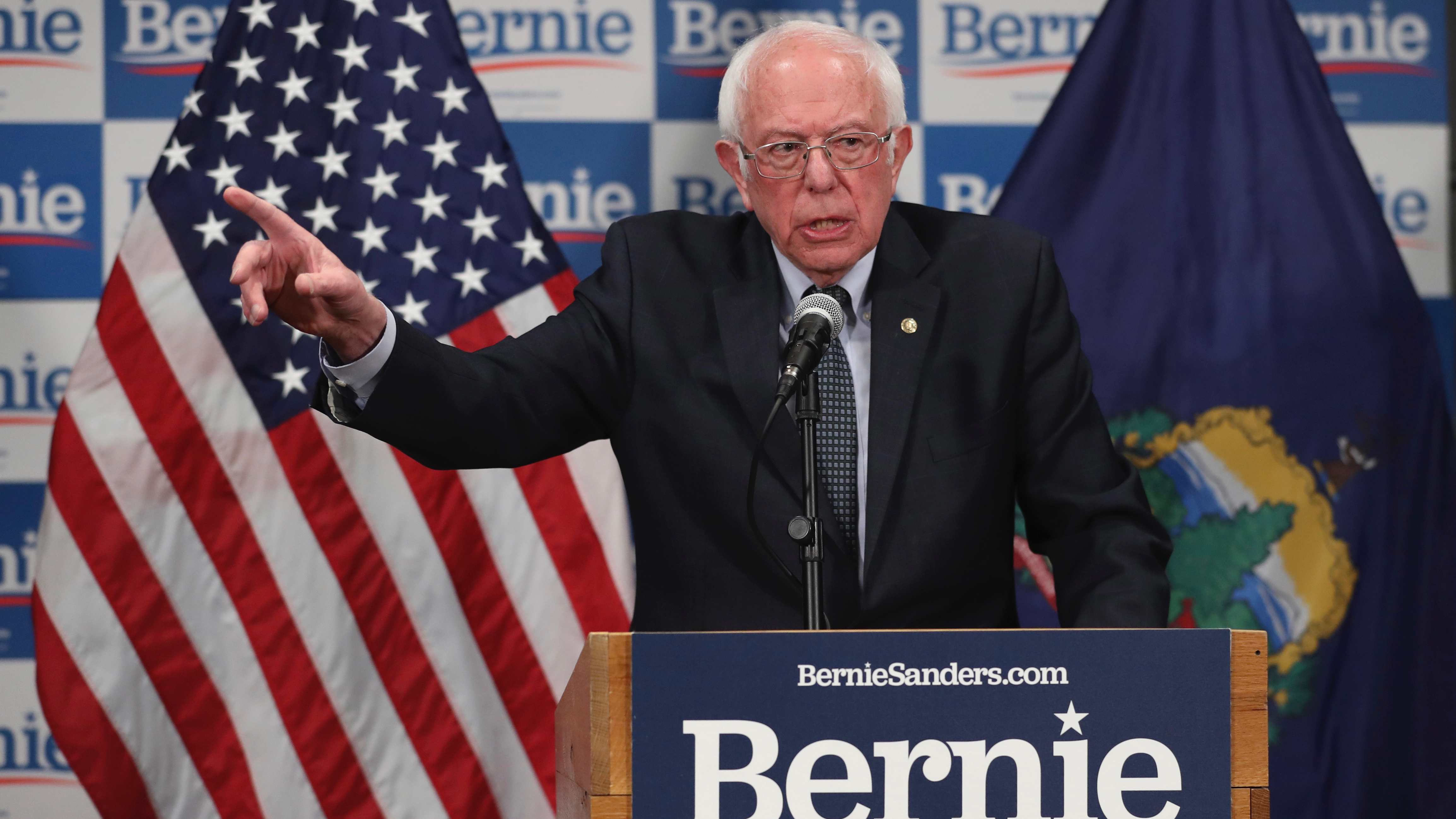 The Democratic primaries could be shut down pretty quickly given Biden's strong position, though it would be hugely controversial.

In Washington state – one of the worst affected areas – voting for Tuesday's primary was done by mail, a decision that pre-dated the outbreak. Curbside drop-off locations have also been mooted.

Could these be a model to follow for the Democrats and even, come November, the nation?

The U.S. economy is going to be hit hard by the fallout from the virus at home and by a likely global downturn. This risks undercutting Trump's best electoral card and central message: a thriving job market and steady growth.

Without a strong economy, Trump's case for reelection looks considerably weaker. Moderates who dislike the president's style but have benefited from his policies will have less reason to back him, and rural voters who came out in big numbers in 2016 have already shown much more willingness to support Biden in 2020 than they did Clinton. 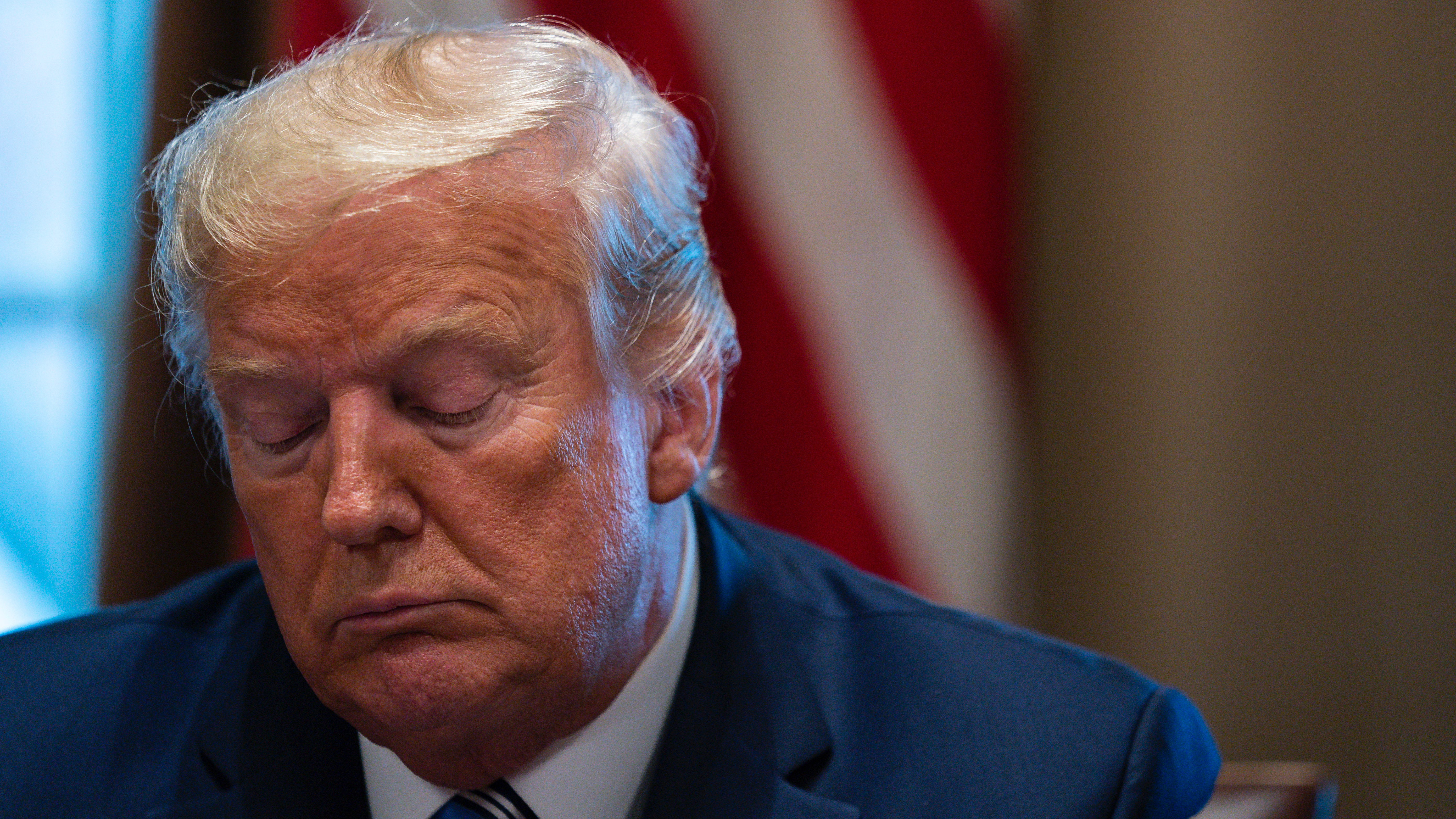 Healthcare, the top issue for Democrats in the 2018 midterms, will likely be center stage too.

The Quinnipiac polls indicates a clear majority of Americans — 66 percent — have confidence the healthcare system can handle the outbreak. In the wake of the outbreak, the practicality of the U.S. system will be in even sharper focus.

And there are also questions about the health of the candidates — all are in their seventies, the group most susceptible to COVID-19.