Gloves are off: Trumpians turn to disinformation
First Voice 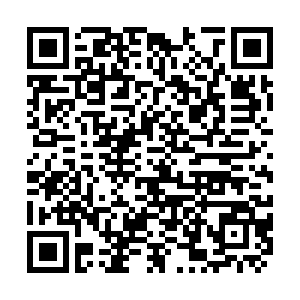 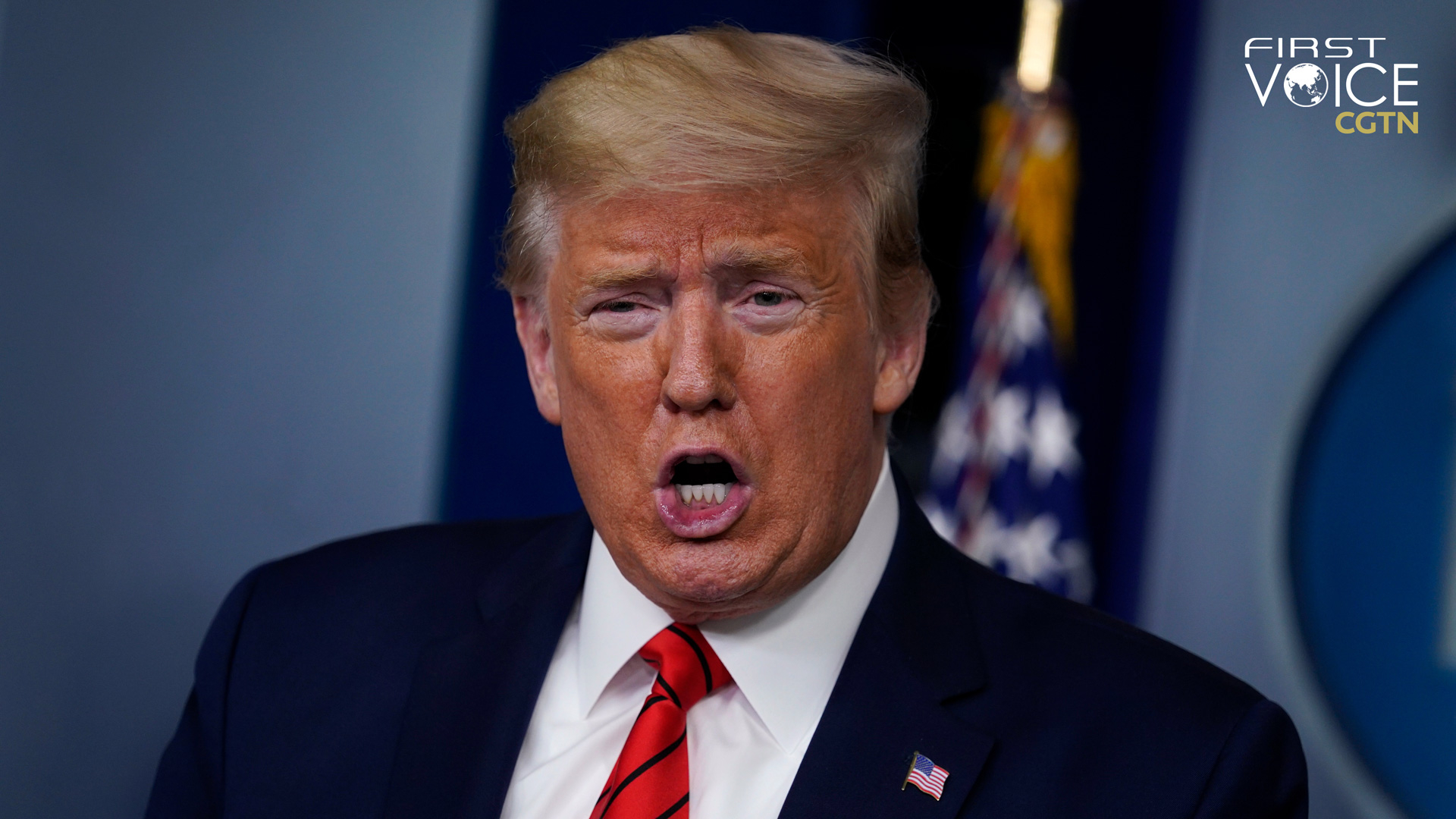 On March 20, the official White House Twitter account posted two short videos featuring the Secretary of State Mike Pompeo saying that the Chinese Communist Party, Russia, and Iran are undermining the U.S.' response to "Wuhan Virus." "Get this information (about the coronavirus) from places where you know you have confidence in that, whether it's whitehouse.gov, or dhs.gov, or state.gov," Pompeo suggested.

So the "Chinese Virus" has gotten an upgrade, hasn't it? It's now veering close to "Anywhere-but-the-U.S. Virus."

To start, it is quite incredulous to see that, of the three agencies that were listed by Pompeo, the U.S. Centers for Disease Control and Prevention (CDC) is nowhere to be found. As the agency charged with the sole mission to control and prevent virus outbreaks, Pompeo doesn't even seem to register the organization in his mind.

And the three parts of the government Pompeo mentioned don't exactly inspire confidence. DHS, the Department of Homeland Security, is led by an Acting Secretary whose incompetency and ignorance about the COVID-19 were on full display during his testimony in front of the Senate. Even the senator from his own party was visibly upset and publicly reminded of him to do his job. The State Department is run by Pompeo himself whom, during a public remark, said "we lied, we cheated, we stole" at the Central Intelligence Agency as reminding people of the "glory of the American experiment." And the White House has an occupant who did a U-turn within the past couple of weeks from praising China's management of COVID-19 to saying that "the world is paying a very big price for what they did."

The impotency, disingenuity, and a tendency to choose political expediency over facts demonstrated by the current U.S. administration have already caused damage to average Americans. In the March 18 Economist/YouGov poll, 38 percent of viewers who tune into Fox News, a Trump-leaning media, were worried about the virus. Bear in mind, this comes at a time when the number of confirmed cases surges past 200,000 worldwide with fatalities in the tens of thousands. Downplaying the severity of the virus would only cause harm to the people. 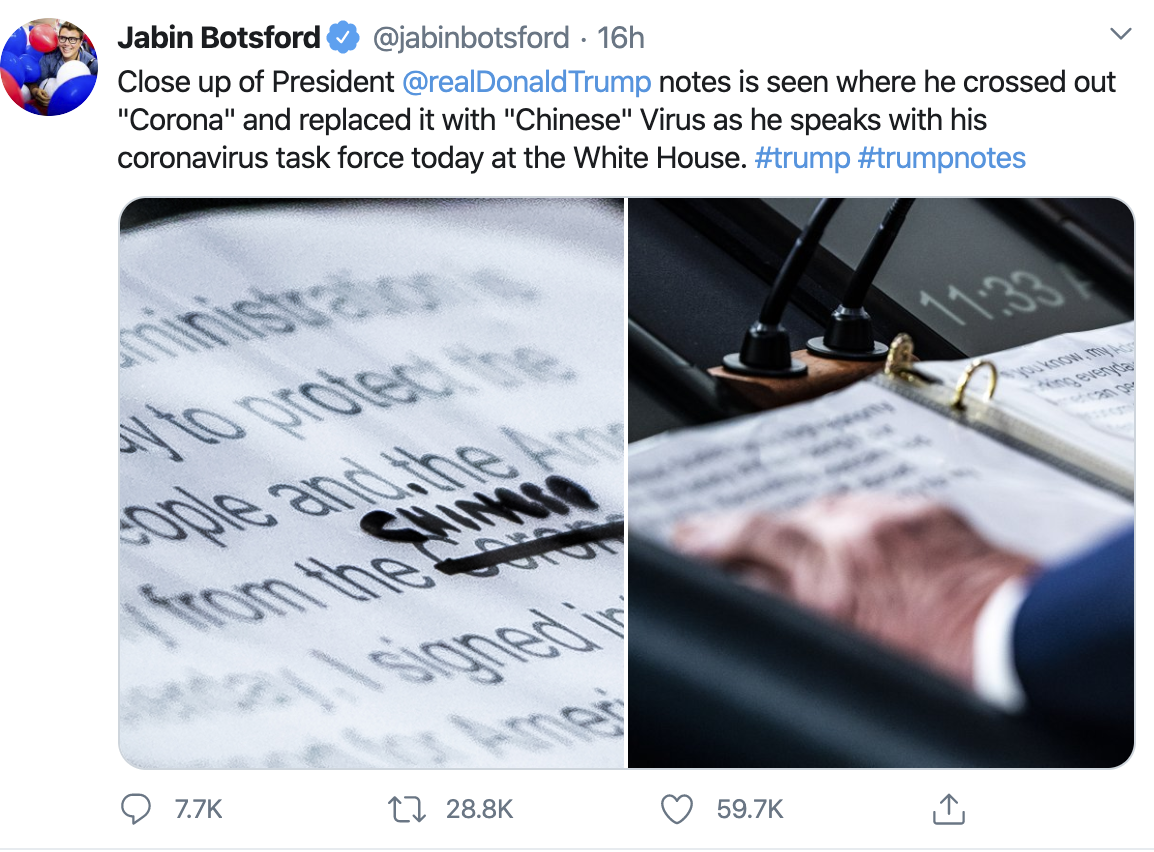 Screenshot of Jabin Botsford's twiiter post, the staff photographer at The Washington Post who captured President Trump's notes that crossed out "Corona" and replaced with "Chinese."

Screenshot of Jabin Botsford's twiiter post, the staff photographer at The Washington Post who captured President Trump's notes that crossed out "Corona" and replaced with "Chinese."

An NPR/PBS Newshour/Marist survey shows that the public confidence in the federal government's handling of the pandemic has dropped by 15 percent after the U.S. experienced outbreaks on its soil. Hospitals across the U.S. are reporting insufficiency in test kits to provide the necessary medical treatment to patients. Blaming others wouldn't change what people are experiencing on the ground.

And using the nation's highest offices to brand other countries as culprits solves nothing and only sows hatred and fear. As Filippo Grandi, the UN High Commissioner for Refugees, said in a recent interview: fear leads to discrimination, which makes people more vulnerable and exposed to danger. And Trump branding a reporter as "terrible" simply because the question posed was about coronavirus-inspired fear mounts to nothing less than a denial of what the public is going through.

The growing consensus around the world is that the idea of labeling the disease as "Chinese Virus" or blaming others for the U.S.' inadequate response aims at shifting the public's anger and hatred away from the culprit. Amanda Walker of Sky News wrote that the economy, which was "supposed to keep him (Trump) in the White House" is sinking and "blaming China is his way of taking the heat off himself." Jason Wilson published an article in the Guardian saying that scapegoating has been a regular methodology used by the far-right faction in the U.S. Jennifer Senior, a columnist for the New York Times, characterized that Trump boasting himself and his refusal to admit mistakes or take responsibility as simply "propaganda."

The problem with propaganda is that it blinds people from seeing the truth. Trumpians can't simply cover their eyes and wish the virus away. Eventually, they will need to face their own inadequacies in order to solve the crisis. And hopefully, the time will arrive before propaganda goes from a political tactic to become their last option left.