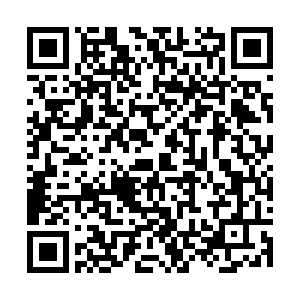 Editor's note: This is the 24th article in the COVID-19 Global Roundup series. Here is the previous one.

More than three billion people are living under lockdown measures as soaring death tolls in Europe and the U.S. on Wednesday underlined a United Nations warning that the coronavirus pandemic threatens all of humanity.

"Global action and solidarity are crucial. Individual country responses are not going to be enough," said Guterres.

As the global death toll soared past 20,800, Spain joined Italy in seeing its number of fatalities overtake China, where the virus first emerged. 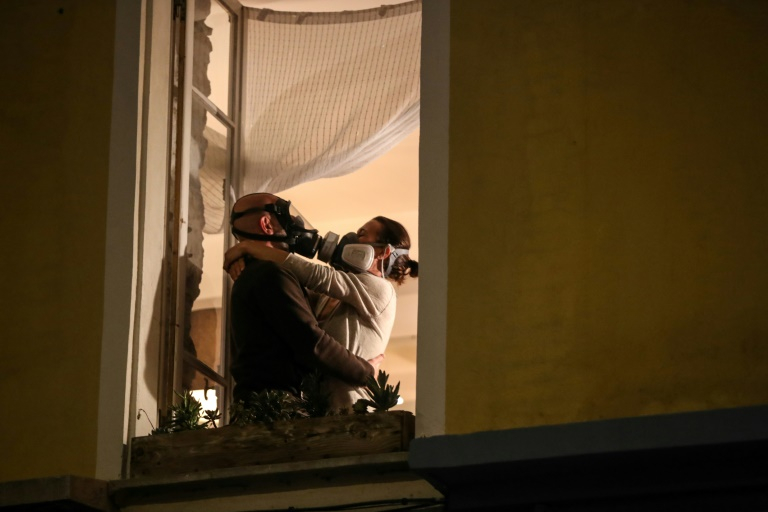 A couple in masks embrace at their window during the daily 8 o'clock applause in support of medical workers in the French Riviera city of Nice, March 25, 2020. /AFP

A couple in masks embrace at their window during the daily 8 o'clock applause in support of medical workers in the French Riviera city of Nice, March 25, 2020. /AFP

Italy has increased punishments for breaking virus control measures, including fines of thousands of euros and five-year prison terms for anyone who tests positive and breaks their quarantine.

Spain, with 3,434 fatalities, now has the second-highest number of deaths globally after Italy's 6,820. Nursing homes across the country have been overwhelmed and a skating rink in Madrid has been turned into a makeshift morgue.

Parliament sat late into the night for a session aimed at approving extending a 15-day state of emergency to 30 days, which has shuttered schools, restaurants and most shops. The extension was guaranteed after the opposition People's Party pledged support. At the same time, the government announced a 432-million-euro (about 467 million U.S. dollars) deal to buy medical supplies from Beijing.

Tuesday, France became the fifth country to record more than 1,000 coronavirus deaths. Jerome Salomon, the country's top health official, has warned that the actual number caused by COVID-19 can be higher, as the 1,100 death toll only accounts for people who died in hospitals.

The health advisers have called for a 15-day extension of the lockdown, making it six weeks total, which is now under consideration by the government.

Bolivia declared a national health emergency and extended its border lockdown on Wednesday, as the government seeks to stem the spread of the virus. According to the government record, the country now has 38 confirmed cases.

Bolivian interim President Jeanine Anez announced that the border closure will be extended to April 15 from the previous date March 31, and no one is allowed to enter or exit the border during the lockdown.

Bolivia, which was already under a 14-day national quarantine, also tightened restrictions on movement, permitting only one person per household to go out between the hours of 7 a.m. and noon on weekdays.

"In recent days, non-compliance with the quarantine has increased the risk of contagion," Anez said, adding that the armed forces and national police would become more involved in enforcing the quarantine. 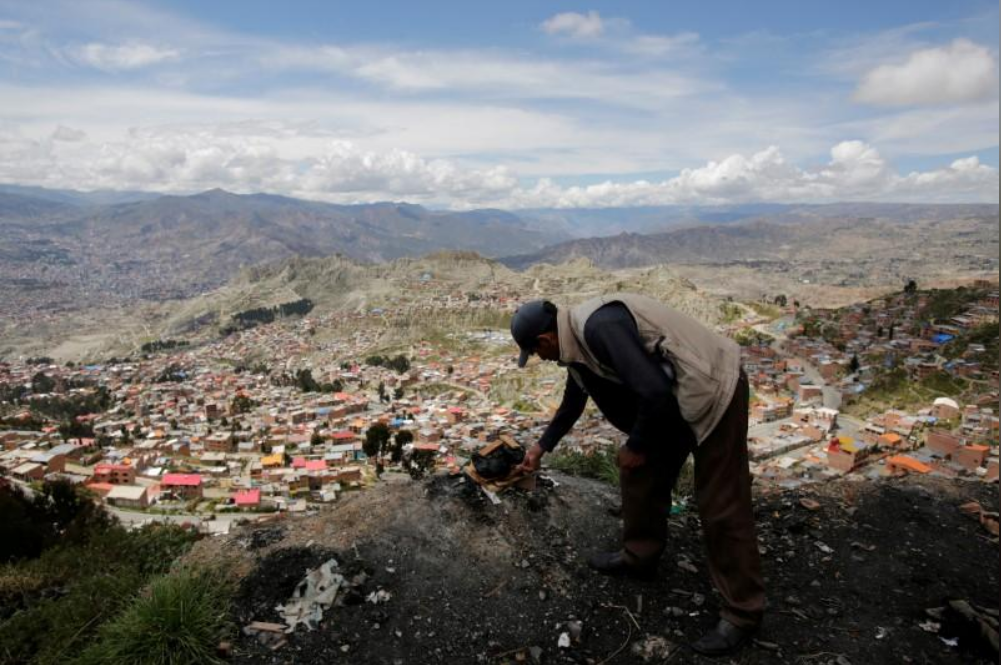 A man puts an offering to the Pachamama or mother earth to demand the end of coronavirus outbreak in the border El Alto outskirts of La Paz, Bolivia, March 24, 2020. /Reuters

A man puts an offering to the Pachamama or mother earth to demand the end of coronavirus outbreak in the border El Alto outskirts of La Paz, Bolivia, March 24, 2020. /Reuters

Meanwhile, India has started its three-week national lockdown on Wednesday. Anxious Indians raced for supplies after the government ordered them not to leave their houses.

India's stay-at-home order for its 1.3 billion people is now the biggest, taking the total number of people facing restrictions on their daily lives to more than three billion.

"To save India, to save its every citizen, you, your family... every street, every neighborhood is being put under lockdown," Prime Minister Narendra Modi said.

Whether the order will be obeyed in full remained to be seen. Mumbai vegetable trader Rafiq Ansari said his customers were getting angry over shortages and price hikes.

"I don't understand what's going on," the 35-year-old told AFP. "We are going to face major shortages in the days ahead."

Most governments are listening to health experts who warn the only way to slow the epidemic – and save the lives of the elderly and vulnerable – is by imposing "social isolation" measures.

Russia, which announced the death of two coronavirus patients on Wednesday is expected to follow suit. The country published a decree on Thursday which ordered aviation authorities to halt all regular and charter flights, with the exception of special flights evacuating Russian citizens from abroad.

President Vladimir Putin declared to postpone a public referendum on the constitutional reforms, which has already been approved by its State Duma and Federation Council, urging people to follow instructions given by authorities.

"The absolute priority for us is the health, life and safety of people. Therefore I believe that the vote should be postponed until a later date," Putin said.

Russia, now accounts for 658 COVID-19 cases, has already taken measures to rein the tide of the coronavirus pandemic, including two-week quarantine for people arriving from abroad, school closures and warning for elderly people in Moscow to stay self-quarantined.

However, Brazilian President Jair Bolsonaro on Wednesday blasted as criminals the governors and mayors of Brazil's largest states and cities for imposing lockdowns to slow the coronavirus outbreak, as tensions with his health minister simmered. 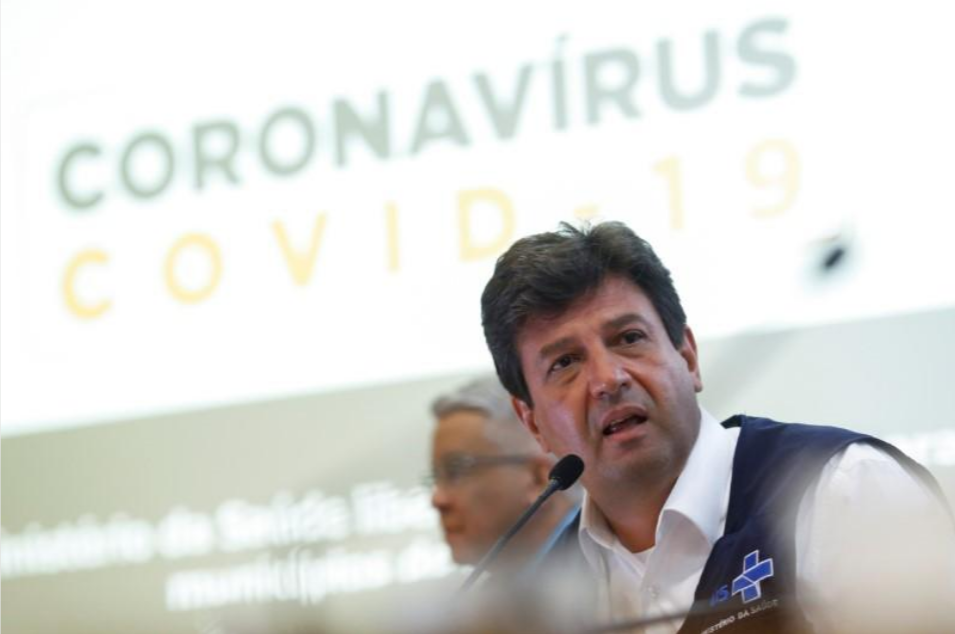 Bolsonaro has aligned himself with U.S. President Donald Trump in prioritizing the economy over the shutdowns favored by public health experts – including his own health minister Luiz Henrique Mandetta – who have warned the outbreak in Brazil could trigger a collapse of the healthcare system next month.

"Other viruses have killed many more than this one and there wasn't all this commotion," Bolsonaro told journalists. "What a few mayors and governors are doing is a crime. They're destroying Brazil."

On Tuesday night, Bolsonaro played down the threat of the virus, assuring Brazilians that "90 percent of us will have no symptoms if contaminated" and his "history as an athlete" meant he personally would suffer at most "a little flu."

As his boss downplayed the virus, national security adviser Augusto Heleno on Wednesday ignored medical advice to self-isolate for two weeks, instead returning to work just seven days into his quarantine after a positive coronavirus test. Heleno also attended cabinet meetings on the day he was waiting for the test result, Reuters learned.

Sao Paulo Governor Joao Doria took Bolsonaro to task for not setting an example for Brazilians and appealed for him to "lead the nation, not divide it" at a time of crisis.

The country's top medical associations issued statements in support of Mandetta's approach to dealing with the epidemic, amid fears that the minister might resign from the job.

At a news conference on Wednesday, Mandetta, who denied that he was quitting, stressed the gravity of the epidemic and the need to keep up the drive to isolate the population from the virus.

Two weeks of lockdown: Will the dawn of victory light Italy's darkest hour?