Two weeks of lockdown: Will the dawn of victory light Italy's darkest hour?
By Duan Fengyuan 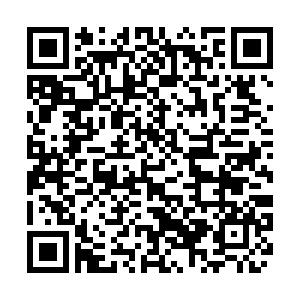 "This is our darkest hour," said Italian Prime Minister Giuseppe Conte two weeks ago when the country put Lombardy under lockdown to try to contain COVID-19, a large region in northern Italy that includes Milan and Bergamo.

One day later, the lockdown was extended to a national level, and on Thursday Conte announced that the lockdown would have to be extended beyond the current end-date of April 3 as Italy's daily death toll spiked.

Two weeks into the lockdown and with the number of cases increasing daily, it's important to review the country's strategy, as Italy becomes the hardest-hit country in Europe.

A city, even a country under lockdown

If Europe is at the center of the coronavirus pandemic as the director-general of the World Health Organization said, Italy is the ground zero of Europe's coronavirus crisis, and Lombardy the epicenter in Italy because around 65 percent of all deaths in the country have been recorded there.

Similarly, Wuhan is the epicenter in China. By Friday, of the 3,255 lives the virus claimed in China, 2,504 were reported in Wuhan, accounting for 76.9 percent of the total. 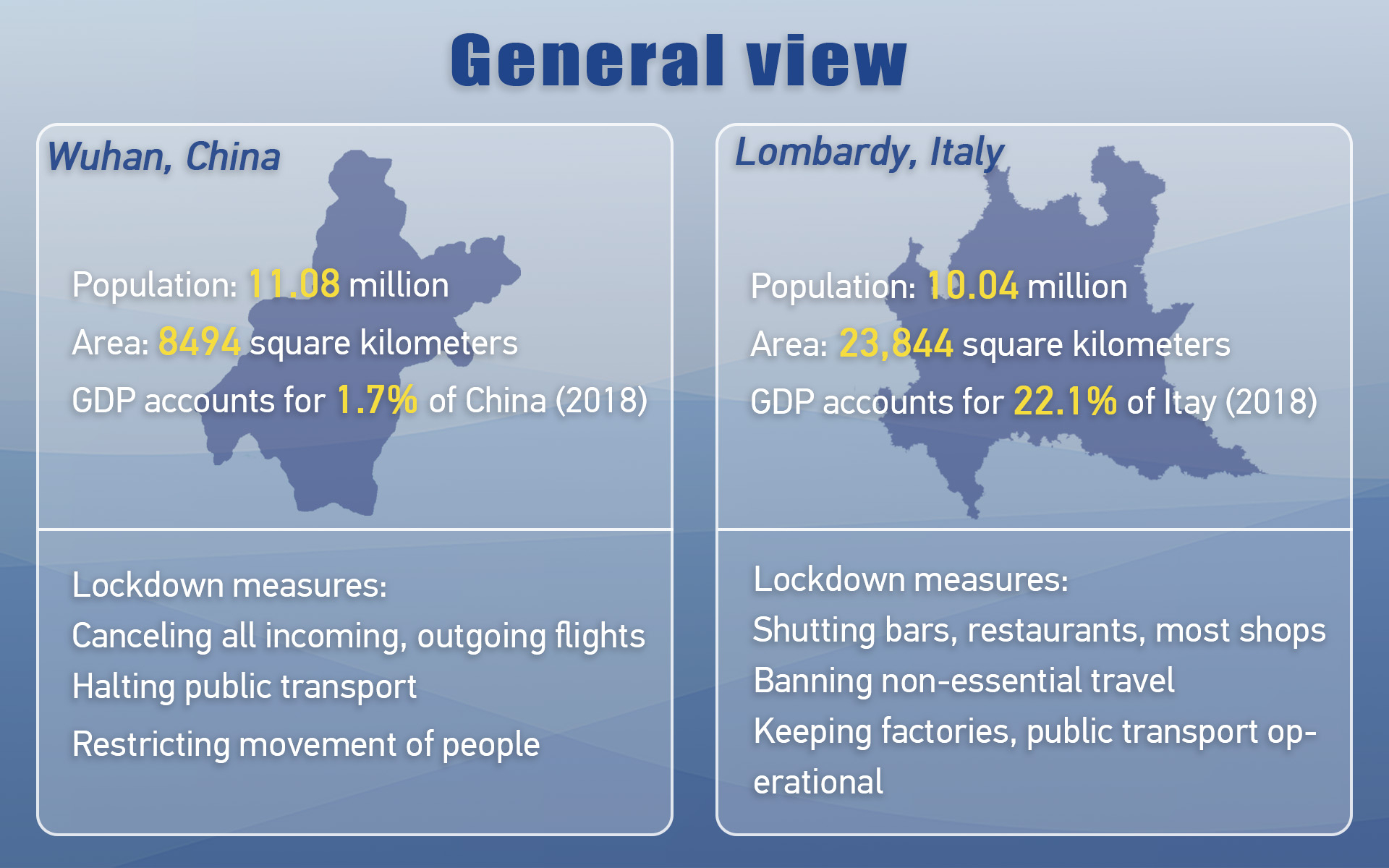 On January 23, China locked down Wuhan, where more than 10 million people live, taking measures like canceling mass events, closing scenic attractions and asking residents to stay indoors to minimize infection risks, as well as adopting unprecedented traffic restrictions, including suspending the city's public transport and all outbound flights and trains.

Almost two weeks after the lockdown, Wuhan slashed the daily increase of confirmed cases to below 100, down from a peak of more than 13,000 on February 12 and China began to see a drop in the number of COVID-19 patients on February 18. 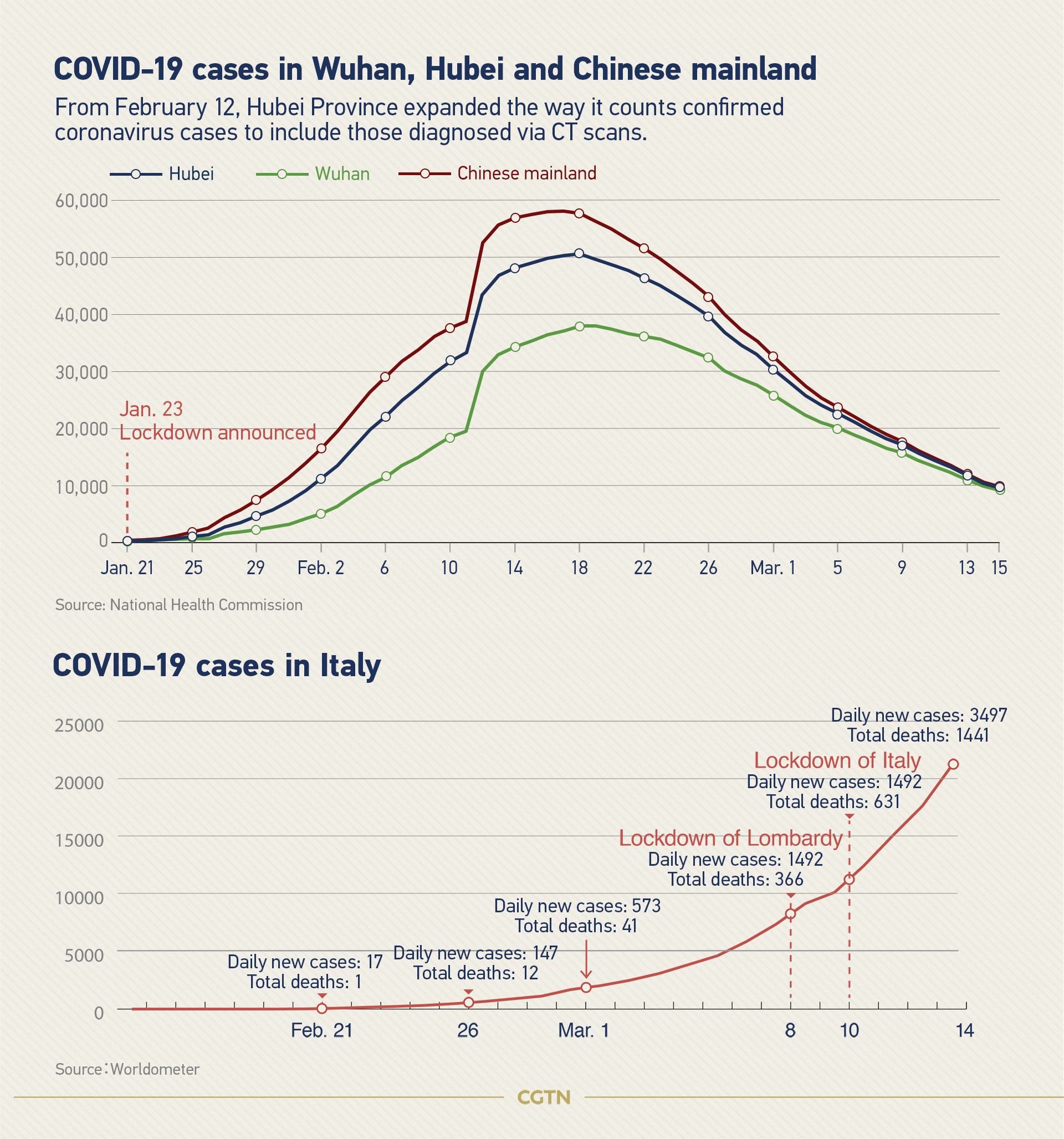 To stem the spread of the virus, Italy placed a general lockdown in a large part of its north on March 8, extending that to a national lockdown on March 9. However, under the new measures, people were still permitted to exercise outside as long as they kept a safe distance from other people.

This ended on Saturday, when all types of outdoor recreational activities were prohibited. Individuals will only be allowed to exercise at home, according to a directive from the Health Ministry.

Other events where crowds might gather, from concert halls and bars to weddings and funerals, were already outlawed by previous lockdown decrees. Violators will be subject to fines and other sanctions.

Read more: Italy's COVID-19 red zones: What are the restrictions?

Unfortunately, wealthy northern Italy remains the region worst affected by the virus. As of Thursday, there were 13,938 positive cases in Lombardy, followed by 4,506 cases in Emilia-Romagna and 3,169 in Veneto, and the total number of confirmed cases across the country continues to rise dramatically.

What matters in the lockdown?

Considering all the latest developments no matter in Wuhan or Lombardy, it seems that implementing lockdown measures is more important and more difficult than a lockdown decision.

Not long after the national lockdown announcement, large numbers of Italians rushed to 24-hour supermarkets to stock up on goods, but the point is, food is not the only thing that matters in a lockdown country.

Hospitals in Lombardy are reaching the point where they may not be able to treat any new cases of the virus. 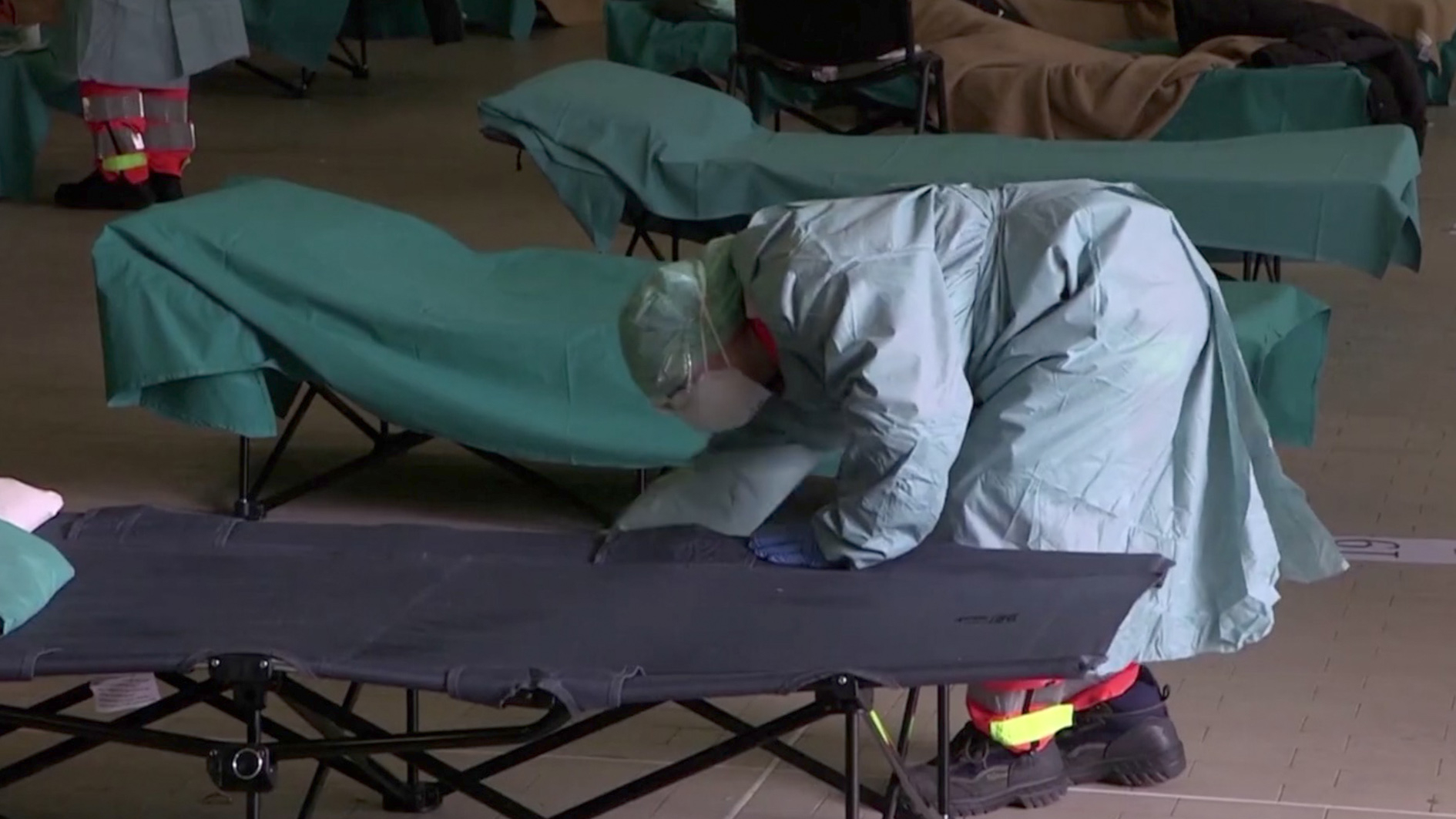 "The elderly get seriously ill, (and) young people and adults also get very sick. The elderly and those with associated diseases get seriously ill. These are the patients who can't make it," said Tony Sabatini, head of the medicine department in Poliambulanza Hospital, during an interview with CGTN.

"This ward was empty until two weeks ago, and as the epidemic worsens, it was set up and completed in six days. Six intensive therapy beds were created," Sergio Canteneo, director of Anesthesiology and Intensive Therapy in Brescia's Civilians Hospital told CGTN.

The Gimbe Foundation research group, using data supplied by the national health authority, said that between March 11-17, some 2,529 health workers had tested positive for coronavirus – 8.3 percent of the national total.

To deal with the situation, Lombardy appealed to recently retired doctors and nurses on Wednesday to return to work and help colleagues overwhelmed by the crisis.

Wuhan also has gone through such difficulties during the lockdown and more than 42,000 medical staff, including those from the military, were dispatched to Hubei Province (where Wuhan is located) from across the country. At the peak of the fight, one in 10 intensive care medics in China was working in Wuhan.

To ensure the timely admission of patients, two hospitals with a total of 2,600 beds were built from scratch in Wuhan within a few days, and 16 temporary hospitals were converted from gyms and exhibition centers to add 13,000 beds.

"People are not respecting the rules and stronger decisions are needed to counter the situation as soon as possible," an Italian interviewee said. Another believed that the lockdown is "psychological terror," saying that diseases like this have always existed. 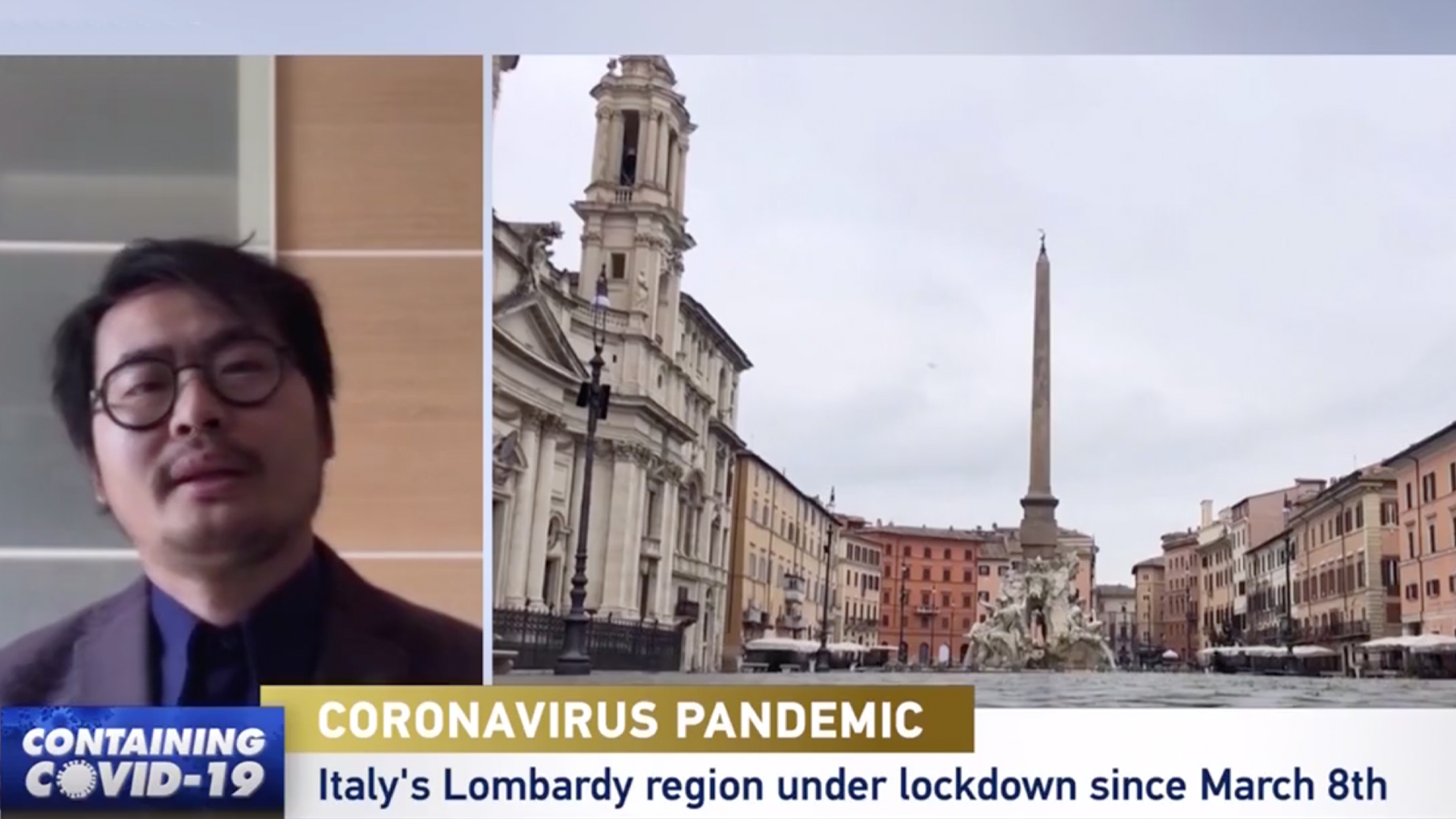 Italy's Interior Ministry said Wednesday that 43,000 people had been caught breaking lockdown rules in the first week of control, with a million people being checked since March 11, when most public places closed.

Zhang Changxiao, president of the Sino-Italian Cultural Exchange Center, told CGTN that Italy is very different from China. "In China, there have mobilizations of all the people and a hardcore approach, but in Italy some people still don't wear masks and precautions are not respected."

As Zhang said, the situation is different in China. Most people followed government rules and locked themselves at home, and big cities such as Beijing and Shanghai have strengthened "people's defense" and ramped up contingency plans. Community workers go grocery shopping, buy medicine, and run other errands for families in quarantine. Large-scale body temperature testing is mandated in workplaces, public venues, and residential communities.

Luckily, China announced that there was no new infections on Wednesday in Wuhan, the epicenter of the pandemic, marking a notable first in the city's months-long battle with the deadly virus. However, domestic virus control and economic development under this global outbreak remains a challenge.

For Italy and other hard-hit countries in Europe, tougher measures are needed and despite their huge cost. European Central Bank President Christine Lagarde said lockdowns could easily cause the EU's economy to shrink by five percent, while the Italian economy is headed for a deep recession with its 10-year borrowing costs briefly pushing past three percent.