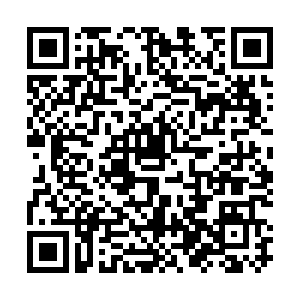 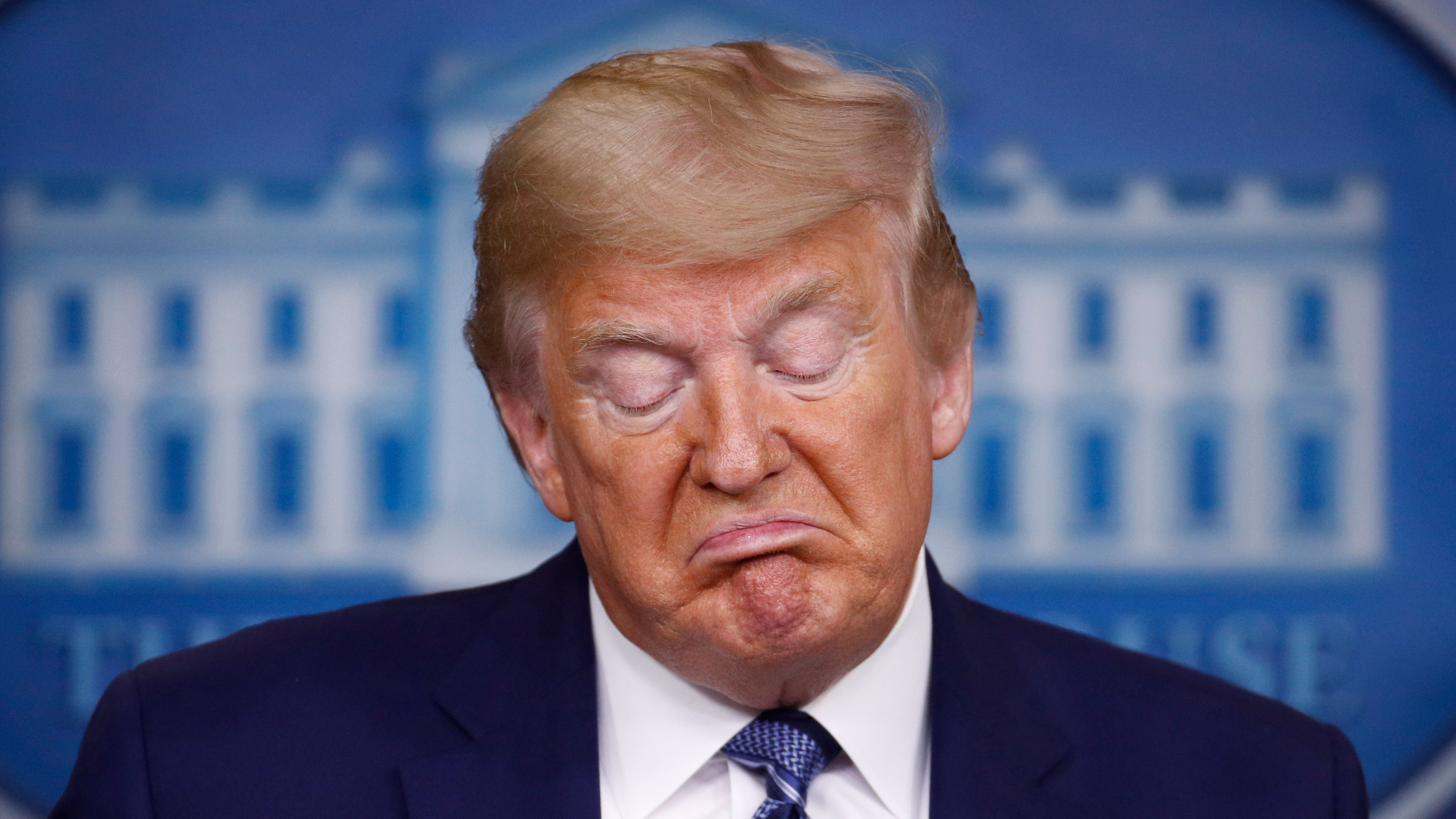 At a time of national crisis, the approval ratings of leaders typically surge – at least fleetingly – as voters and rival politicians exchange partisanship for unity.

The COVID-19 pandemic is no different for many presidents, prime ministers and governors: Ratings are rising even as death tolls mount.

"There is a long-recognized and well-researched 'rally round the flag effect' when an external threat blows up that requires a national, non-partisan effort to defeat it," Tim Bale, professor of politics at Queen Mary University of London, told CGTN.

Andrew Cuomo and the rise of the governors

Digital battle heats up with Trump and Biden off the road

The trend can be seen in polls across much of the world.

YouGov data put net approval for the UK government at +26 at the beginning of April, in positive territory for the first time in nearly a decade. Prime Minister Boris Johnson, now hospitalized with the virus, surged from +2 net approval on March 11 to +29 percent on March 24, according to Morning Consult.

In Australia, a Newspoll released on Sunday showed approval for Scott Morrison up 20 points and net approval up 38 points from mid-March. Sixty-four percent of Canadians approved of the federal government's handling of the crisis in a March 23 poll by Angus Reid, up 15 points in a little over two weeks.

The most notable exceptions are Japanese Prime Minister Shinzo Abe, whose approval ratings fell by 5.7 points from last month to 43.2 percent in a JNN survey published on Monday, and U.S. President Donald Trump, whose marginal uptick in approval has now stalled. 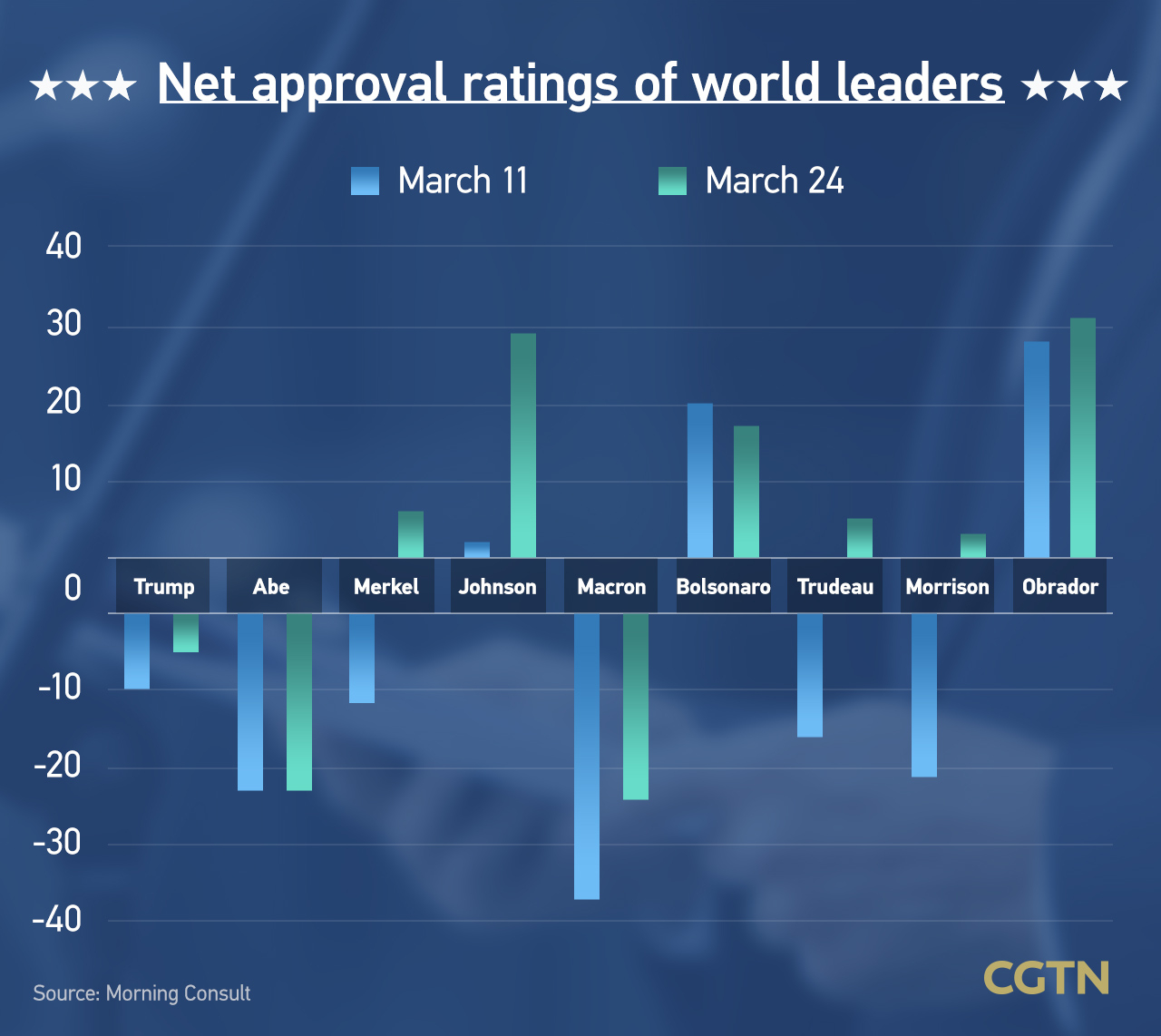 A polling tracker from FiveThirtyEight indicates that on February 29, the day the first coronavirus-related U.S. death was reported, 47.2 percent of Americans approved of Trump's handling of the crisis. On April 5, approval of the president's approach was up by just two points. In the same period, a tracker of overall job approval shows his rating ticking up 2.5 points.

"Trump has enjoyed a bit of a bump - and we shouldn't ignore that," Professor Bale told CGTN.

"If it's lower than the one some other leaders have experienced that could be explained by two things: first, his response, it could be argued, has been particularly inept and damaging; and second, US politics is particularly polarised right now - even more so than in most other countries."

Trump's divisiveness is reflected in a breakdown of the FiveThirtyEight tracker data: the president's approach is approved of by 86.2 percent of Republicans but just 19.8 percent of Democrats.

However, partisanship is far less evident when looking at approval for U.S. governors, who have been at the forefront of the fight against COVID-19.

Sentiment polling from Microsoft News, published on April 1, showed governors across the country received an average favorable rating of 72 percent for their handling of the crisis, 27 points higher than Trump's 45.

The polling shows Trump exceeding 60 percent approval in just two states, while 47 states rank their own governors at 60 percent or higher. 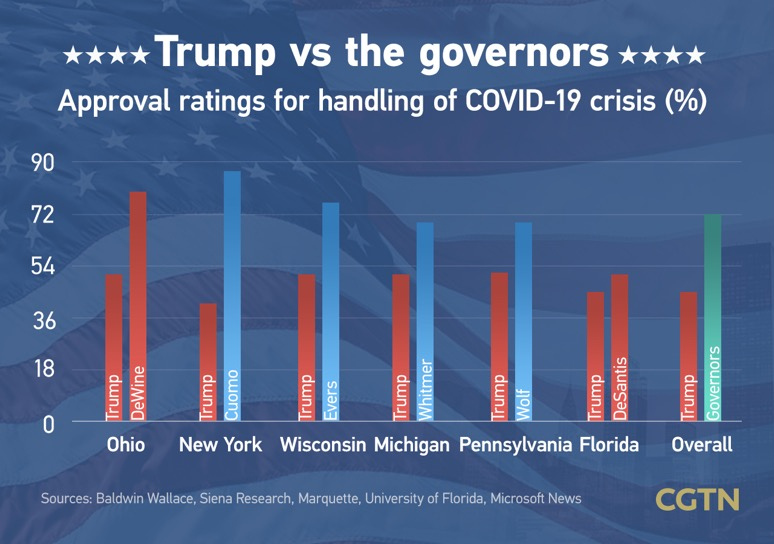 The swing state of Florida, where Trump-backer Ron de Santis' struggles could be an ominous sign for the president in November's general election, stands out.

The Public Opinion Research Lab at the University of North Florida found that 51 percent of Floridians approved of the Repubilcan governor's handling of the crisis in an April 3 poll, only slightly higher than the 45 percent who backed Trump's approach.

By contrast, New York's Democratic Governor Andrew Cuomo has near universal support. A Siena Research poll of New York voters last week put Cuomo's approval rating for his handling of the epidemic at a massive 87 percent, dwarfing the 41 percent of New Yorkers who approve of the president's response.

"At least 85 percent of voters from every region approve of his (Cuomo's) handling of the crisis, as do 95 percent of Democrats, 87 percent of independents and even 70 percent of Republicans," Siena College pollster Steven Greenberg said.

Some Republican governors are also receiving plaudits, with Mike DeWine's management of the crisis in Ohio, another swing state, approved of by 79.9 percent of the state's voters according to a Baldwin Wallace University poll in late March, compared to 51 percent who supported Trump's approach. 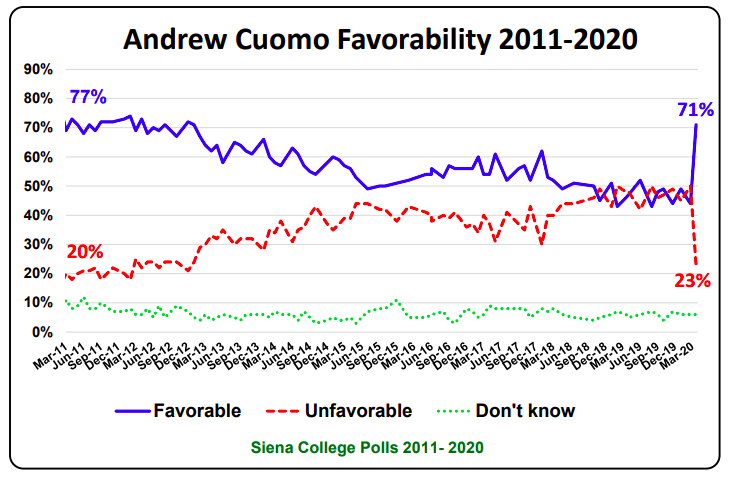 The U.S. has a long history of rallying around its leaders at a time of crisis: George W. Bush surpassed 89 percent average approval, according to RealClearPolitics data, in the wake of the 9/11 attacks and George H.W. Bush hit 89 percent with Gallup after the 1991 Gulf War.

The polling evidence from around the U.S. suggests that voters are still prepared to rally around a competent state leader at a time of crisis. But Trump has so far largely failed to capture that mood, with the latest ABC/Ipsos polling indicating approval for the president's response is weakening: It dropped from net +12 in mid-March to -5 at the beginning of April.

Ultimately, history suggests the surges in support for leaders like Johnson, Morrison and Cuomo are also likely to be soft. The younger Bush managed to sustain enough backing to narrowly defeat John Kerry in the 2004 presidential election, but the elder saw his ratings drop 60 points in a little over a year in the run up to losing the 1992 election to Bill Clinton.

"The dip is normally significantly more gradual than the spike but it almost always takes place," Bale cautioned. "How much it impacts on a leader's re-election chances therefore depends on how soon after the initial crisis has passed any election takes place.”