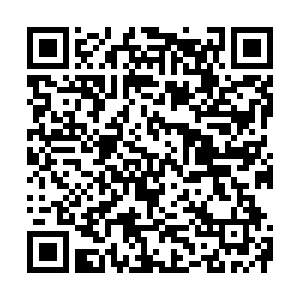 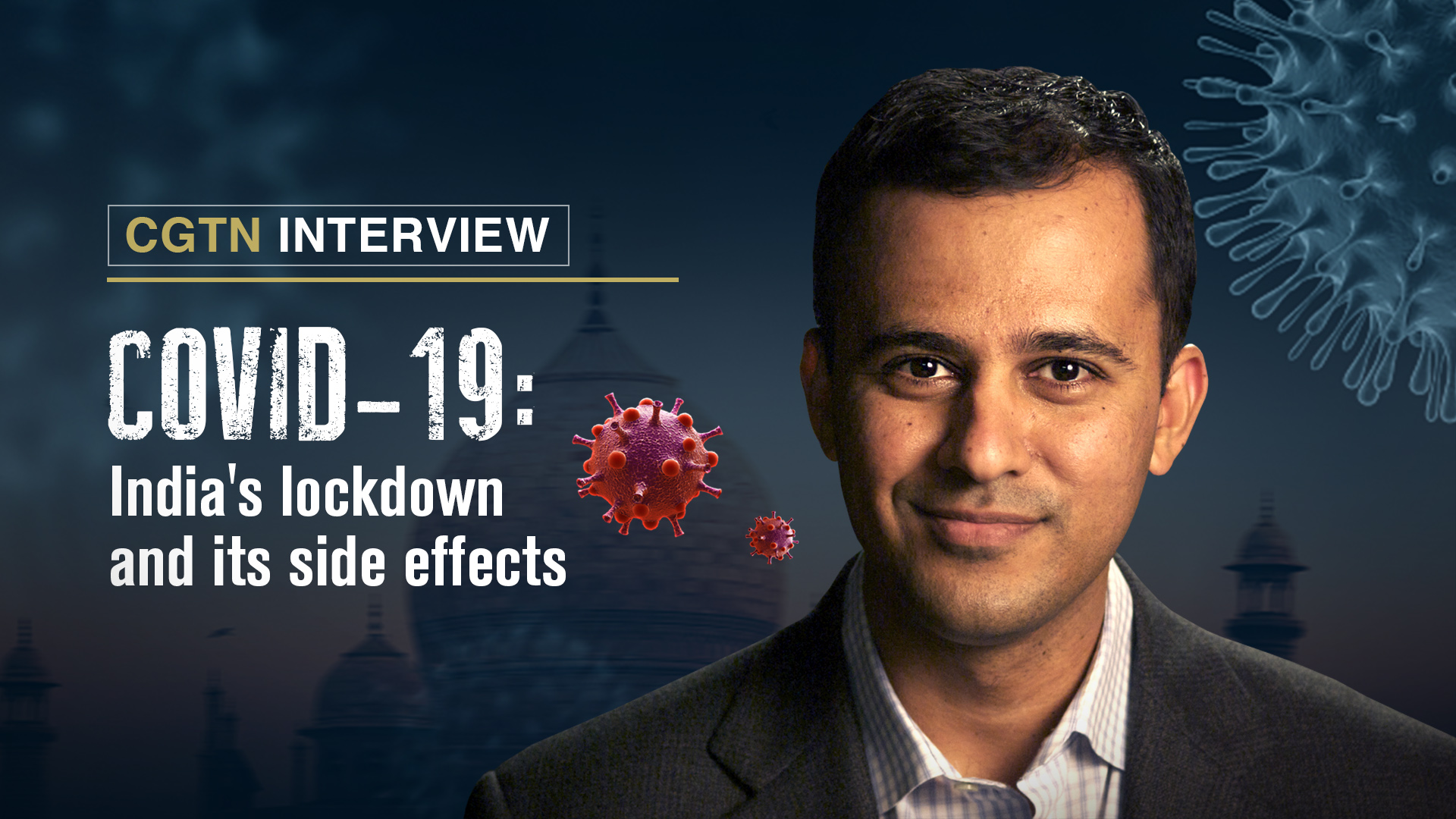 While India has managed to slow down the spread of COVID-19 through what is perhaps the world's largest nationwide lockdown, the socio-economic fallout of the decision on the South Asian country of 1.3 billion has been devastating with livelihoods of tens of millions of migrant workers threatened.

Indian Prime Minister Narendra Modi earlier this week announced a 270 billion U.S. dollars stimulus package, nearly 10 percent of the country's annual GDP, to kickstart the stalled economy while also hinting that the lockdown that began on March 25 will be extended beyond the current May 17 deadline, but with certain relaxations.

"The lockdown is only a postponing tool. It is not a permanent strategy for dealing with the virus," Dr. Ramanan Laxminarayan, director of the Washington-based Center for Disease Dynamics, Economics and Policy, told CGTN Digital on Thursday in an exclusive interview via Skype.

"So whether in India or nearly every other country, including probably New Zealand, which has no cases right now, there is no long-term way of escaping this disease until a vaccine arrives… As per the current projections, the vaccine will not be available at scale till 2021-end and possibly 2022. We are talking about a scenario where the virus will continue to spread unless we continue to remain in constant lockdown. Because the minute you lift the lockdown, the virus will spread again," explained Laxminarayan, who is also a Senior Research Scholar at Princeton University.

Referring to the socio-economic stress that the mainly poor Indians are facing, he remarked: "This is the saddest part of the whole thing. We've managed to contain the virus, but we've not managed to contain the side effects of the lockdown. And the side effects are at every level. It is at the high level of companies, the economy, it's about small, medium businesses, it is small traders, and it is migrant workers and farmers."

He, however, stressed that India's focus has been one of saving lives ahead of the economy. "In that spirit, let's make sure that no one else dies of other causes, such as hunger or other diseases besides COVID-19, and try to get rid of this epidemic as quickly as possible either through to a vaccine or to a stage where there is herd immunity. And once we get to that stage, then we can try to recover the economy and go back to life as normal, which will take a few years for sure." 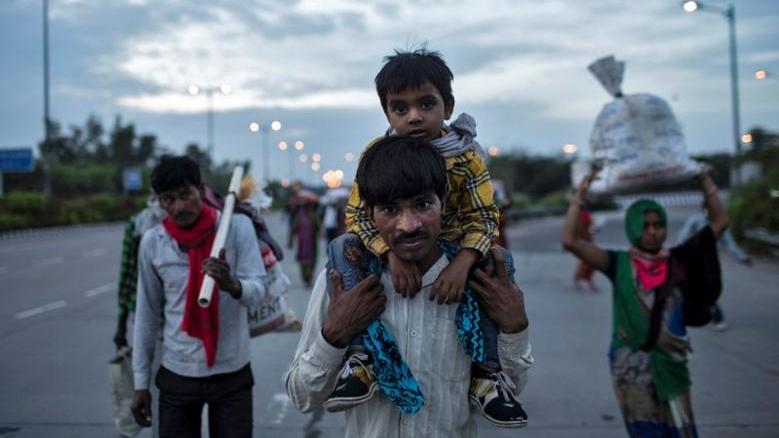 A migrant worker carries his son as they walk along a road with others to return to their village, during a nationwide lockdown, in New Delhi, India, March 26, 2020. /Reuters

A migrant worker carries his son as they walk along a road with others to return to their village, during a nationwide lockdown, in New Delhi, India, March 26, 2020. /Reuters

One of Laxminarayan's key works is the development of a large-scale computer model of the Indian population, which he claimed can be used to predict possible scenarios with the right data inputs.

Earlier in March, ahead of the lockdown, Laxminarayan predicted a worst-case scenario of roughly 60 percent of Indians, over 700 million, getting infected by COVID-19 at its peak, causing an alarm in the country. However, soon after the lockdown, he revised that estimate to about 200-300 million cases.

With more than 50-days into lockdown and the total COVID-19 cases in India hovering just a little over 82,000 (as of May 15), Laxminarayan still felt that over time the numbers would be closer to his later estimate.

"We are in a situation where the virus continues to spread. It has probably already spread far more than the 75,000 or 80,000 cases today because many people are asymptomatic, not everyone is picked up by the current screening and testing protocols. But I expect that we will reach, you know, the couple of hundred million cases over time. The lockdown only pushes that out some time into the future," he asserted on Thursday.

Explaining the revision of his estimates, Laxminarayan said: "We can make predictions prior to the lockdown to say what will happen in the absence of the lockdown. Because remember, there are two aspects of these models. One is the virus, and the other is human behavior. Human behavior is a more complex part. The virus is much simpler."

"If you're only modeling the virus behavior, that's much easier, and we can tell you this is what's going to happen. But once you have human behavior, you have lockdowns, you've government policy, you've travel restrictions, then it becomes much, much more difficult to have the model tell you anything meaningful at that point in time. So that's the situation we're at," he added.

Laxminarayan admitted that the required epidemiological data under the current circumstance when the entire world is in the grip of a global pandemic is extremely challenging.

"What we would need is transparency and data. And that is true not just for India, but every other country that data on testing should be in the public domain that you remove patient identification. But without that kind of epidemiological data, it is very hard to make meaningful predictions," he remarked. 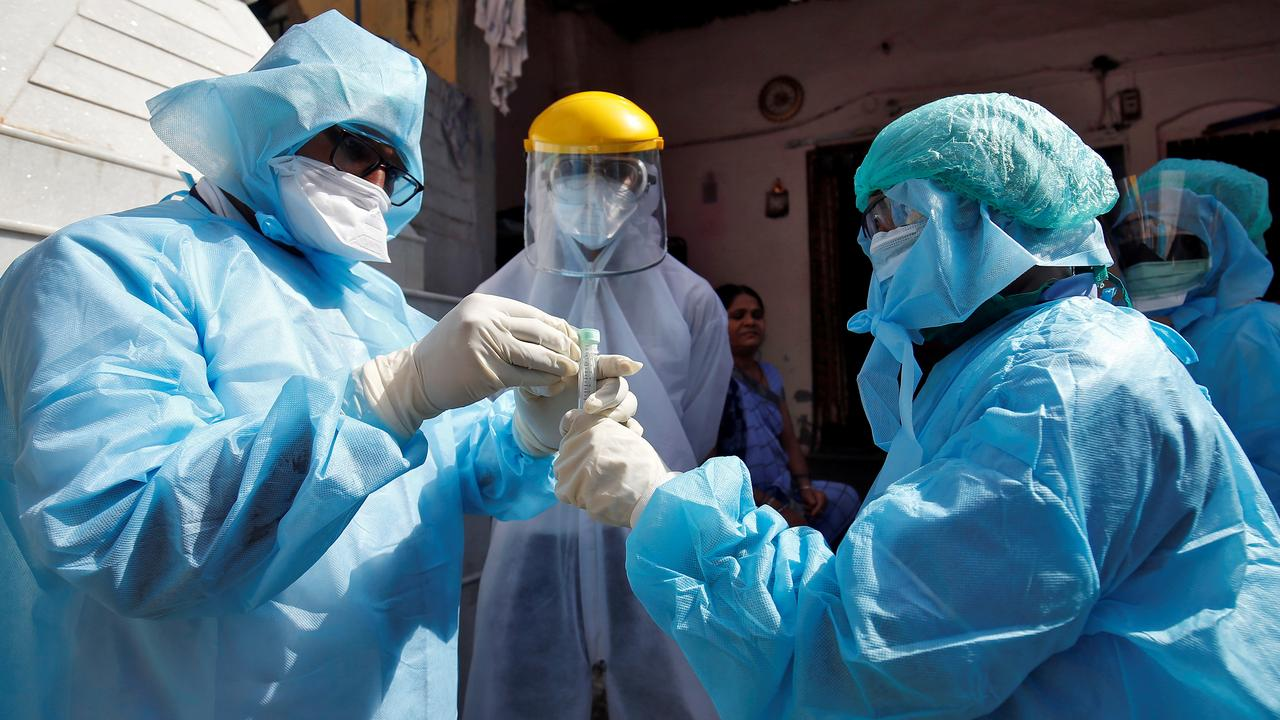 Doctors wearing protective gear seal a vial after taking a swab from a woman to test for COVID-19 at a residential area in Ahmedabad, India, April 9, 2020. /Reuters

Doctors wearing protective gear seal a vial after taking a swab from a woman to test for COVID-19 at a residential area in Ahmedabad, India, April 9, 2020. /Reuters

India has been criticized for relatively low COVID-19 tests, although the tests have picked up in recent days. On Thursday, Health Minister Dr. Harsh Vardhan announced that the country topped two million tests.

Asserting that aggressive testing isn't feasible for most countries, and much less for a country the size of India, Laxminarayan, however, felt that the need of the hour is to change the testing strategy to focus on reducing mortality.

"In the early stages of the epidemic, if you're trying to slow down the epidemic growth, then you try to test as many people as possible so that you can isolate and quarantine them. After that phase is passed and the virus is truly out of control in the sense that you can't locate everyone with the virus or you can't even locate maybe 20-30 percent of people with the virus, which is now true in India, then you refocus your testing to try to reduce mortality," he said.

"What we do need now is early identification of severe cases, particularly in elderly populations, people with comorbidity, that should really be the focus. You can't count every single case with COVID-19 going forward. That is not feasible in any country, in fact. It's not feasible in India, it's not feasible in the U.S. or Germany, which are much wealthier countries. So there needs to be a change in testing strategy," he added.

"So far, we are using the COVID testing, the RT-PCR (reverse transcriptase-polymerase chain reaction) to isolate, track, and contain. Going forward, it should be to identify high risk and reduce mortality. That's quite a change, but that is needed now," he asserted.

'Learnt a lot from China; time to fight the virus together'

Laxminarayan acknowledged that China's experience helped in India's COVID-19 strategy, including its lockdown decision, saying more relevant data from China could be crucial in the global fight against the pandemic.

"China is really the place from which we've learned a lot about the disease. Early stages and who progresses to severe disease, the role of potential immunity, and in terms of use of ventilators. Even the idea of lockdown came from China in that sense," he noted.

He said more relevant data from China could help in scientific modeling of the pandemic at a global scale. "We also need data from individuals to see how many people are being infected, secondary infections, where the transmission was happening. Some of this is in the journal publications. But a lot more data sharing would be helpful for all countries, including China, France, Italy, India and everyone."

"This is the time to actually fight this together rather than trying to fight independent battles against COVID-19, which is not going to be very productive. It is much more productive for the world to cooperate at this time," he remarked.