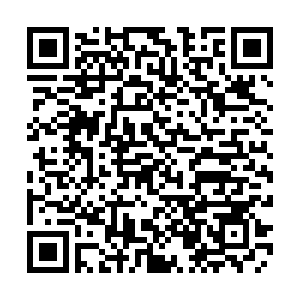 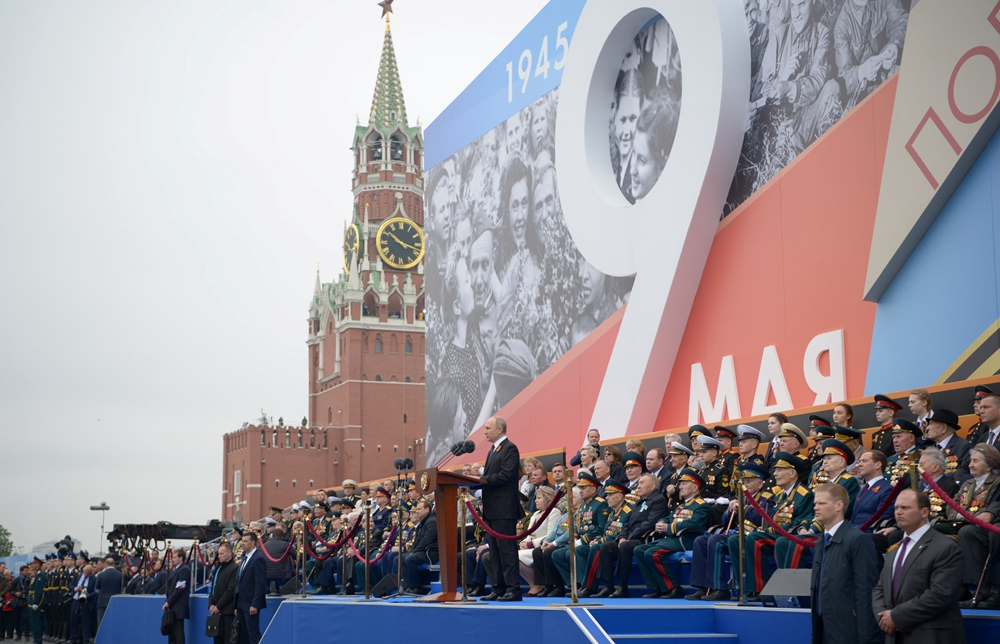 Two months ago, Russian President Vladimir Putin postponed the Victory Day parade celebrating the 75th anniversary of the World War II victory from its traditional date of May 9, in light of the COVID-19 pandemic.

Serving as another chance to make up for the "muted celebration" on May 9 — only 75 fighter jets and helicopters flew over its capital on that day – will the upcoming V-Day parade on Wednesday bring victory to Putin and Russia?

Highlights come with concerns and uncertainties

As a platform of the conventional show of military might and diplomatic skills, various pieces of military equipment and the attending foreign leaders will draw the world's attention.

Russia has invited troops from 19 countries, including China and India, to march at the rescheduled parade in Moscow. A tri-service contingent of the Indian armed forces is set to participate and China's domestically developed Y-20 large transport aircraft carrying 105 members of the Chinese People's Liberation Army honor guard landed in Moscow on June 13 for the upcoming parade. 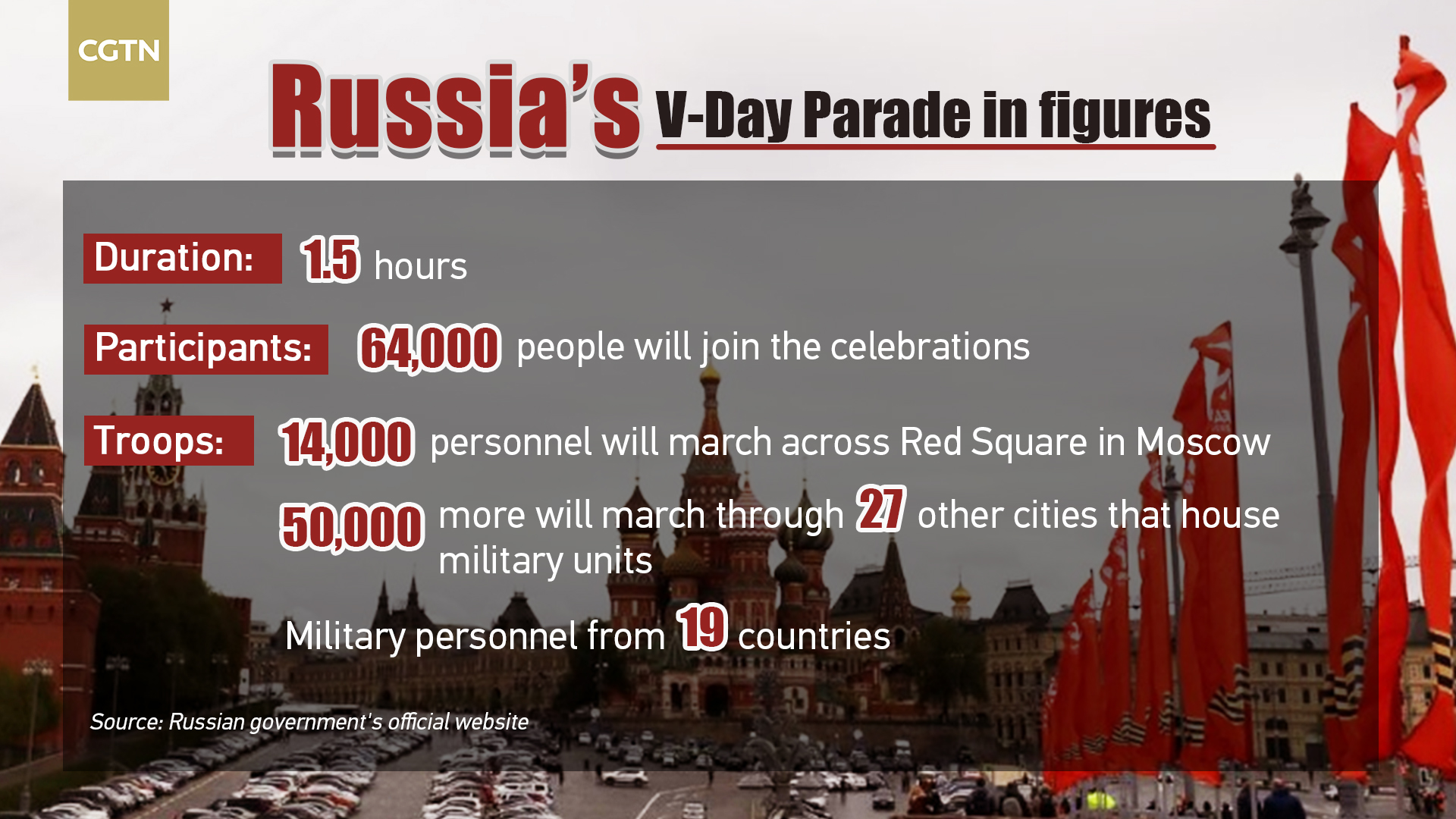 Putin, 67, will survey a display of modern military might involving about 14,000 troops, with more than 20 types of military hardware on show for the first time, including Tosochka flame-throwers, T-90M tanks and Buk-M3 surface-to-air missile systems.

Vintage vehicles such as the workhorse T-34 tank will also be on display and some troops will wear World War II uniforms.

Media reported that Indian Defense Minister Rajnath Singh and President of Belarus Alexander Lukashenko are expected to attend the ceremony, while the full list of guests will be published on the eve of the parade, and Putin will communicate with the guests on the sidelines, according Russia's TASS news agency. 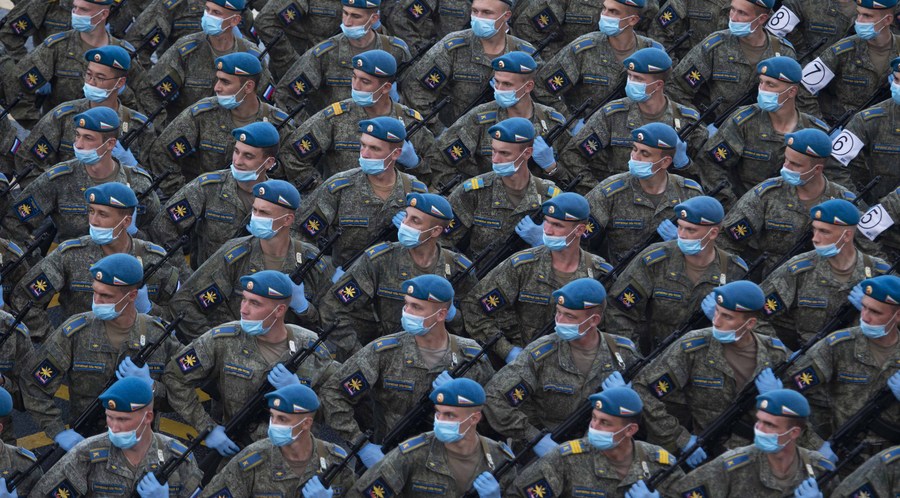 Meanwhile, with more than 8,000 recorded fatalities and around 580,000 confirmed COVID-19 infections, Russia has the pandemic's third largest caseload after the United States and Brazil.

Though Putin stressed that risks for all participants must be kept to a minimum, concerns still persist over the safety of holding such a massive event amid a global pandemic.

At least 20 Russian cities have already canceled or postponed their June 24 parades, leaving only 28 cities that plan to go ahead, mostly located in headquarters of military districts and "hero cities" of special significance to WWII events.

However, benefits win over risks in Putin's mind.

In power as president or prime minister for more than two decades, Putin personally reviews the parade every year, and its postponement, along with that of a nationwide vote on constitutional reforms that could extend his rule until 2036, was seen as disrupting his political agenda.

The parade will be Putin's first major appearance in public since the pandemic, after he attended an open-air flag-raising ceremony on June 12.

Meanwhile, a recent poll gave Putin his lowest approval rating in more than two decades, albeit a still high 59 percent, which is possibly the result of COVID-19 and the floundering economy. Moscow and other regions have observed lockdowns since late March. 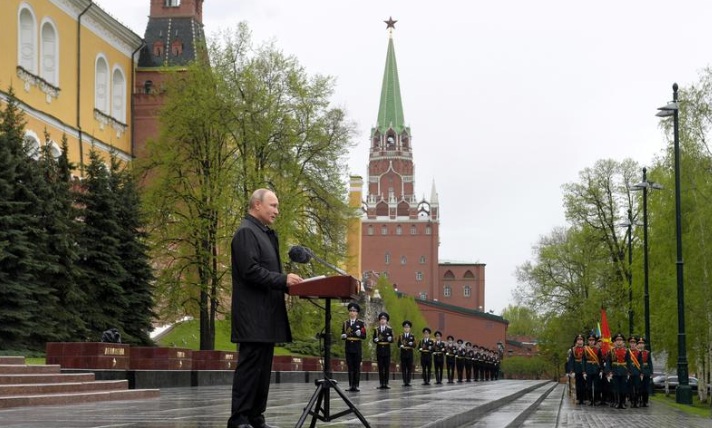 Russian President Vladimir Putin delivers a speech near the Tomb of the Unknown Soldier on Victory Day amid the COVID-19 pandemic in central Moscow, Russia, May 9, 2020. /Reuters

Russian President Vladimir Putin delivers a speech near the Tomb of the Unknown Soldier on Victory Day amid the COVID-19 pandemic in central Moscow, Russia, May 9, 2020. /Reuters

In such a case, a successful and grand parade will be a good opportunity to display the military strength, stimulate the sense of patriotism, urge unity around the whole country and release the sign of life returning to normal.

"We are united by our shared memory, hopes and aspirations, as well as a sense of shared responsibility for the present and the future. We know and strongly believe that when we stand together, we are invincible," said Putin in an address near the Tomb of the Unknown Soldier on Victory Day on May 9.

Highlighting Russia's presence in the international arena will be another obvious benefit.

On the eve of Victory Day, Putin sent congratulatory letters to many former Soviet republics, as well as to the leaders of Britain, the United States and France, suggesting the need to rekindle their nations' cooperation during World War II to solve today's problems.

Far more than a parade

Victory Day is Russia's most important secular holiday. This year's observance had been expected to be especially large because it marked the 75th anniversary, but a military parade at Moscow's Red Square and a mass procession called the Immortal Regiment were postponed as part of measures to stifle the spread of the coronavirus.

On July 26, the Immortal Regiment march, a tradition in which millions of people across Russia parade with portraits of their relatives who fought in World War II, will take place, as well as the traditional Navy parade at the country's main naval bases, which usually is held on the last Sunday of July.

Russia, most of the countries of the former Soviet Union, and Israel all celebrate the end of World War II on May 9.

What does VE day mean to countries across Europe?

Victory day reminds the world about the evils of fascism 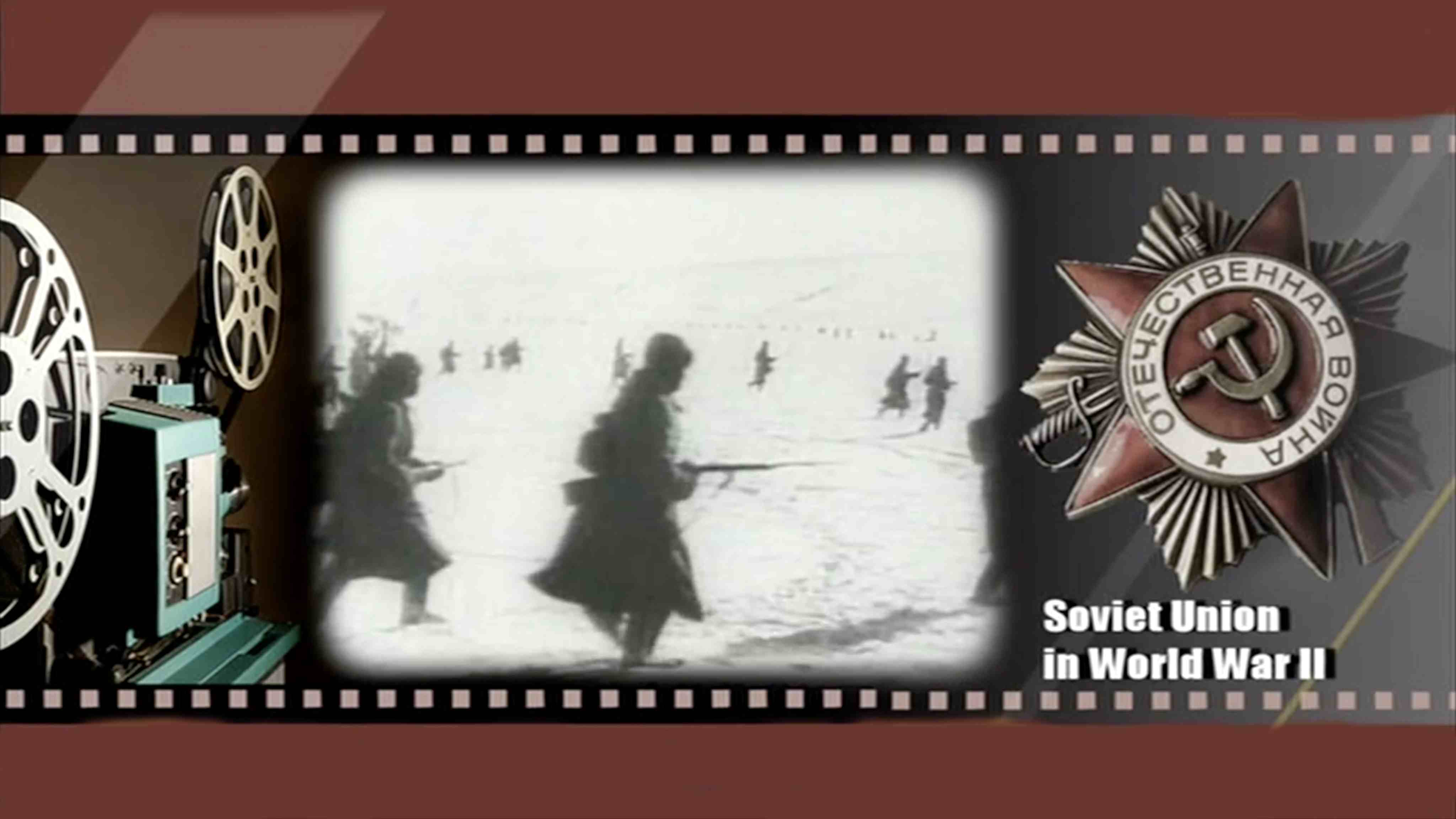 On June 22, 1941, millions of Axis troops attacked the Soviet Union in violation of the non-aggression agreement signed between Moscow and Nazi Germany.

On the night of May 8, 1945, Berlin time, which was the early hours of May 9, Moscow time, Nazi Germany signed an Act of Unconditional Surrender in a suburb of Berlin. The Soviet Union named the date "Victory Day" and decided to host festive military parades in Moscow's Red Square every year.

The parades stopped after the collapse of the Soviet Union in 1991, but were resumed in 1995.

It marked the end of the 1941-1945 Great Patriotic War of the Soviet Union, an integral part of World War II lasting from 1939 to 1945. The catastrophic war claimed the lives of about 27 million people from the Soviet Union, according to official statistics.

All of Russia's surviving World War II heroes are now over 90 years old.