Graphics: What has Beijing said about the key Sino-U.S. splits?
By Hu Yiwei 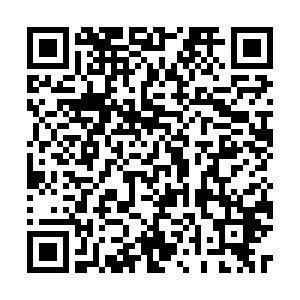 China and U.S. relations have unraveled at alarming speed over the course of the COVID-19 pandemic. Chinese State Councilor and Foreign Minister Wang Yi has said ties between the world's two largest economies are now at their lowest since 1979.

The words of China's Foreign Ministry spokespeople reflect the country's position on an issue at any given time. CGTN analyzed the questions raised at the ministry's daily briefings in July and visualized the most-frequently addressed factors connected to China-U.S. relations. 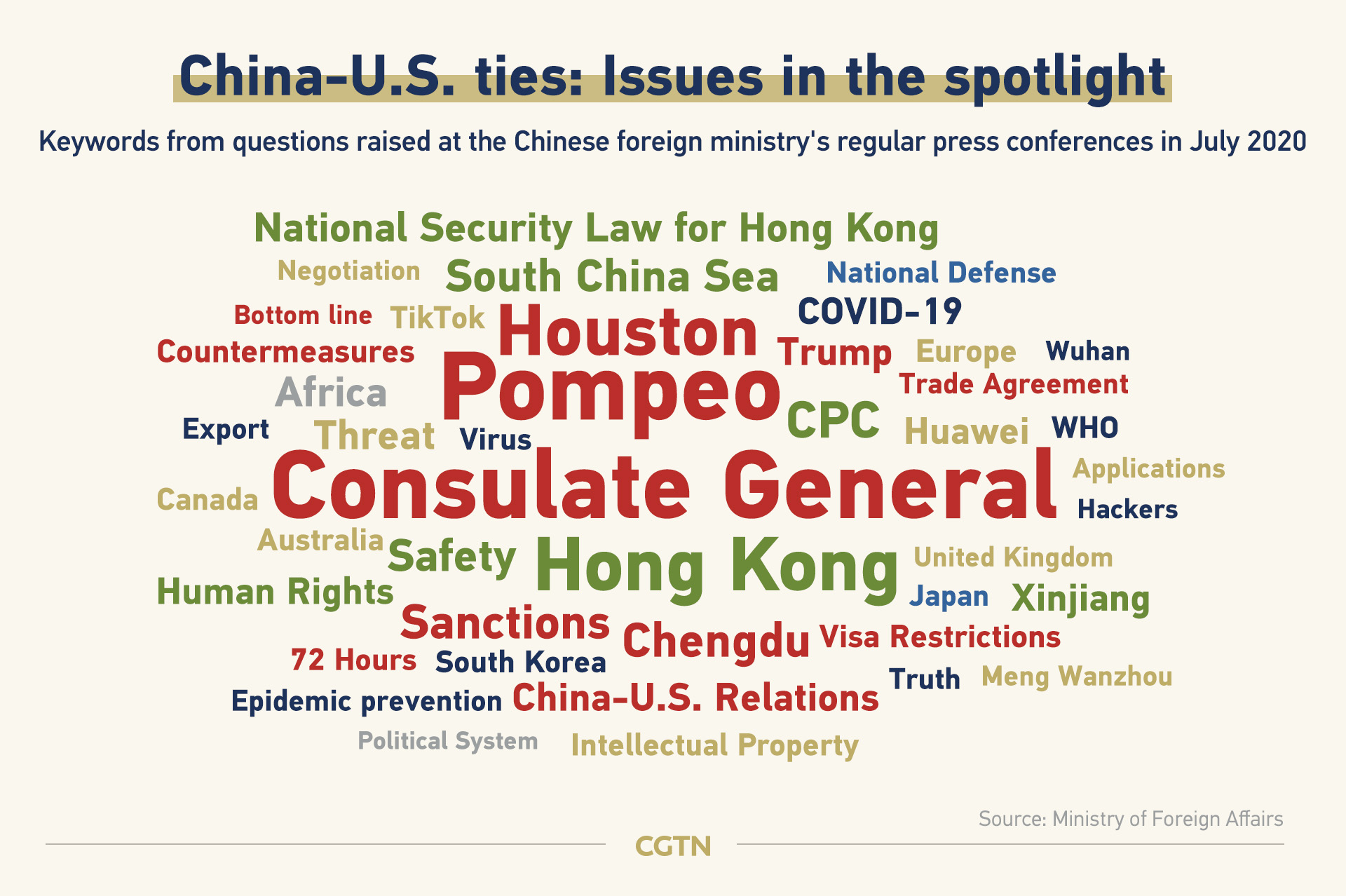 As the word cloud illustrates, bilateral relations deteriorated over issues ranging from the South China Sea to Xinjiang, coronavirus, Huawei and TikTok.

CGTN also analyzed the language used by Foreign Ministry spokespeople in response to questions about Washington's attacks and accusations. 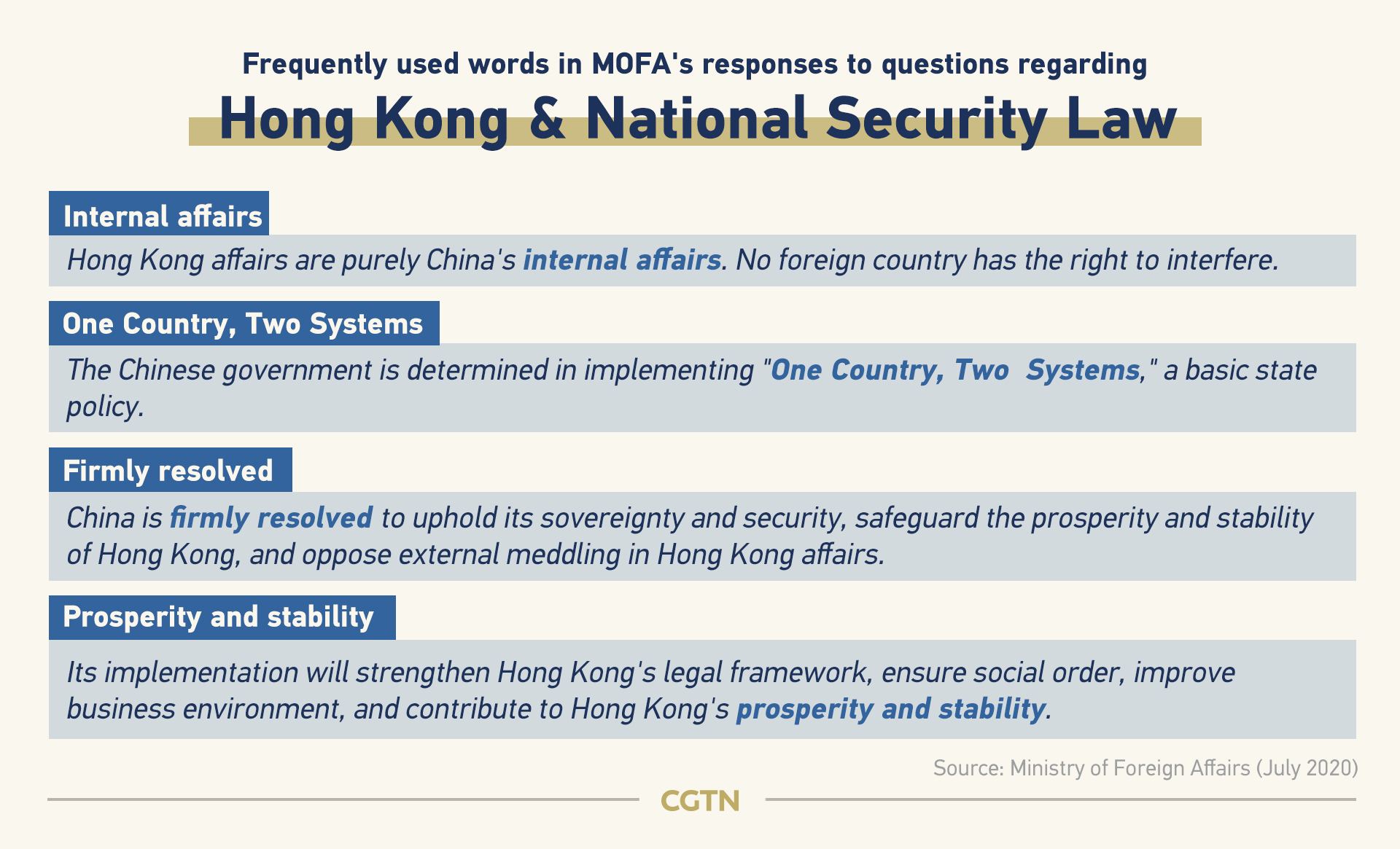 In their responses, the spokespeople repeatedly stressed that matters related to Hong Kong were China's "internal affairs" and remained determined to implement "One Country, Two Systems." 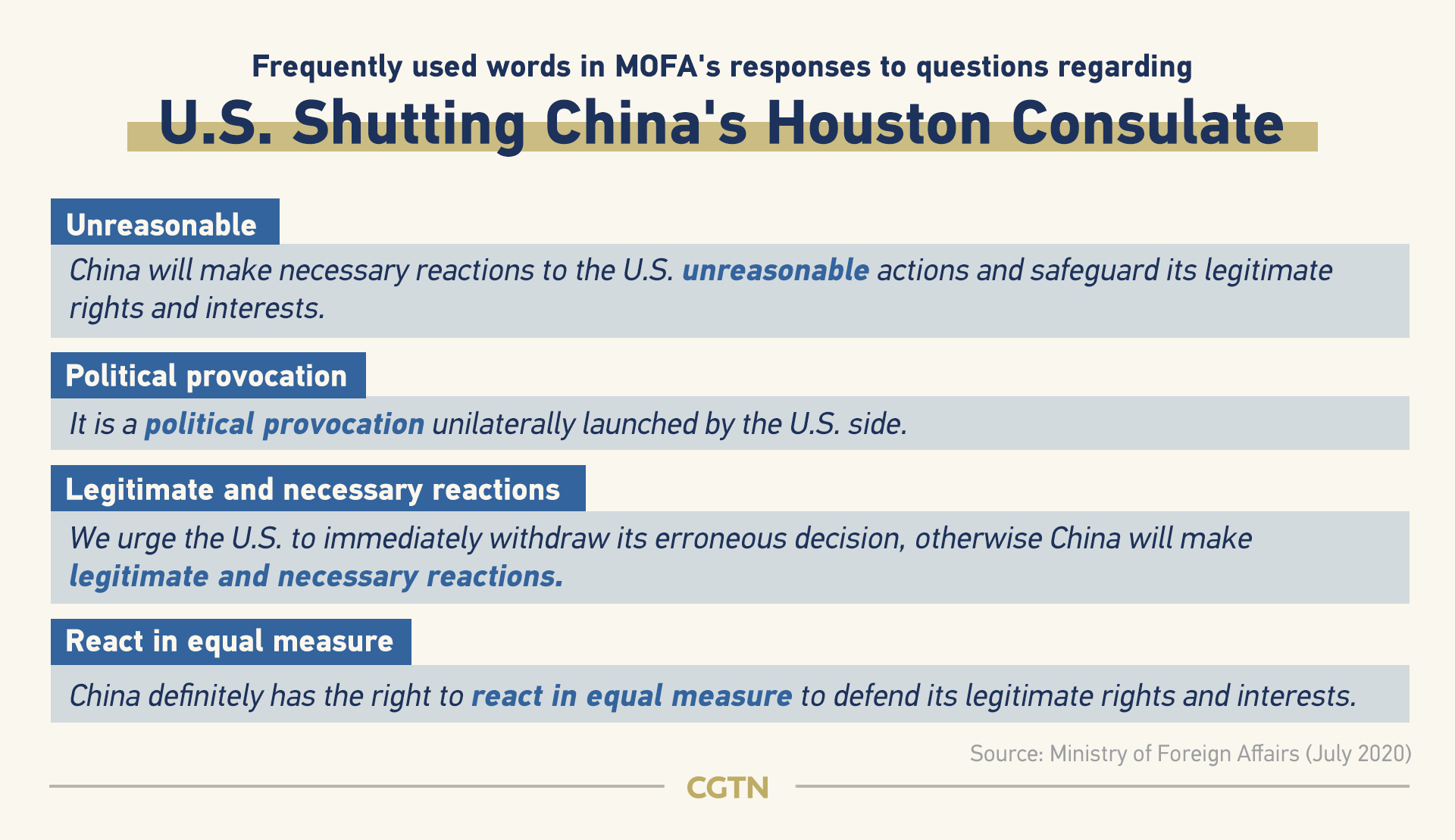 The Trump administration on July 21 ordered China's consulate general in Houston to close, a significant escalation of tensions in already hardening relations between the two countries.

The spokespeople called it "a political provocation" and stressed that China "has the right to react in equal measure." China later told the U.S. to shutter its consulate in Chengdu in 72 hours. 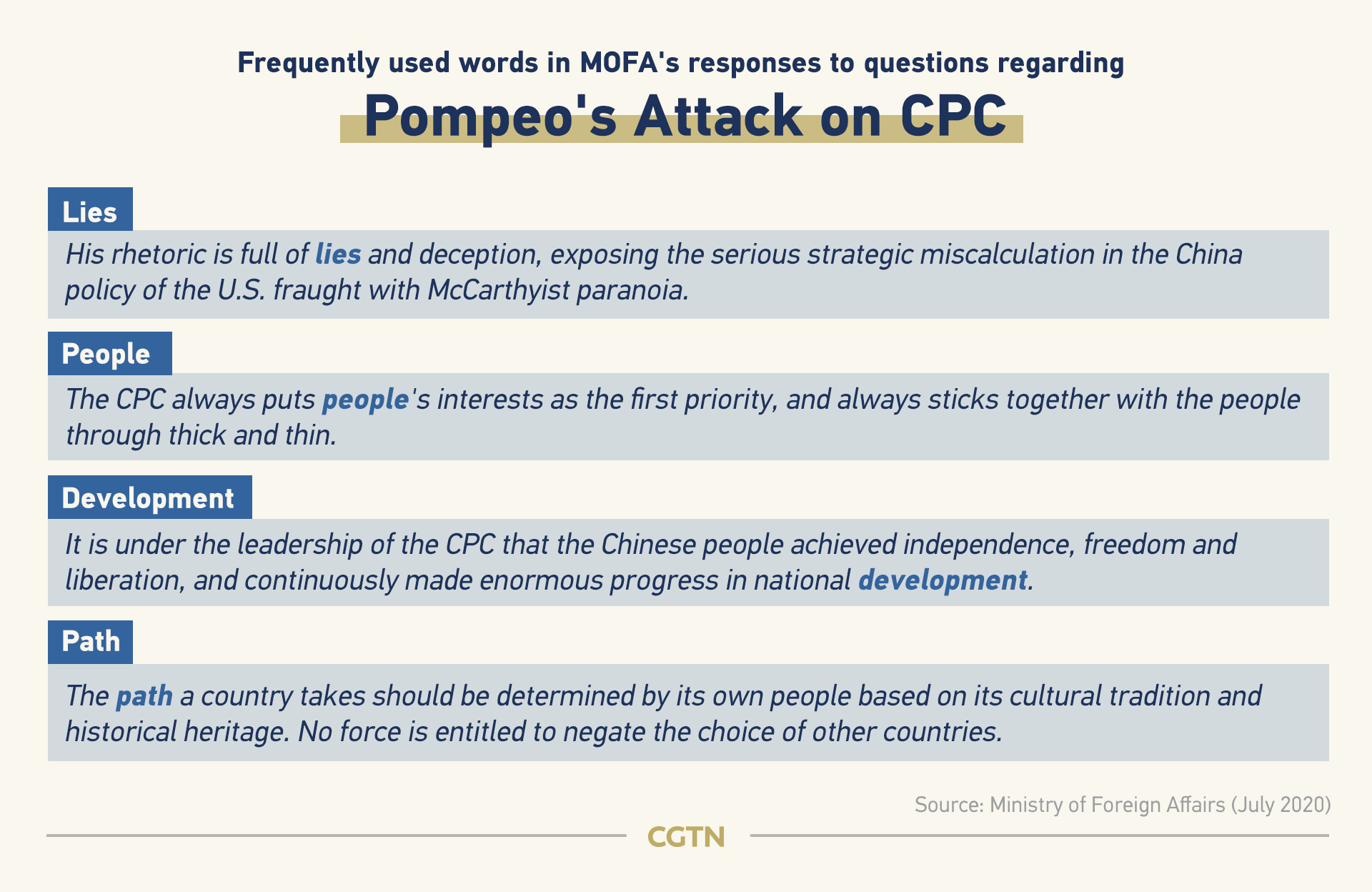 U.S. Secretary of State Mike Pompeo said U.S. engagement with China has failed in a speech delivered on July 23, and that Washington and its allies must use "more creative and assertive ways" to press the CPC to change its ways.

After Pompeo's address at the Richard Nixon Presidential Library, the Chinese Foreign Ministry said his "rhetoric is full of lies and deception," adding that "the path a country takes should be determined by its own people." 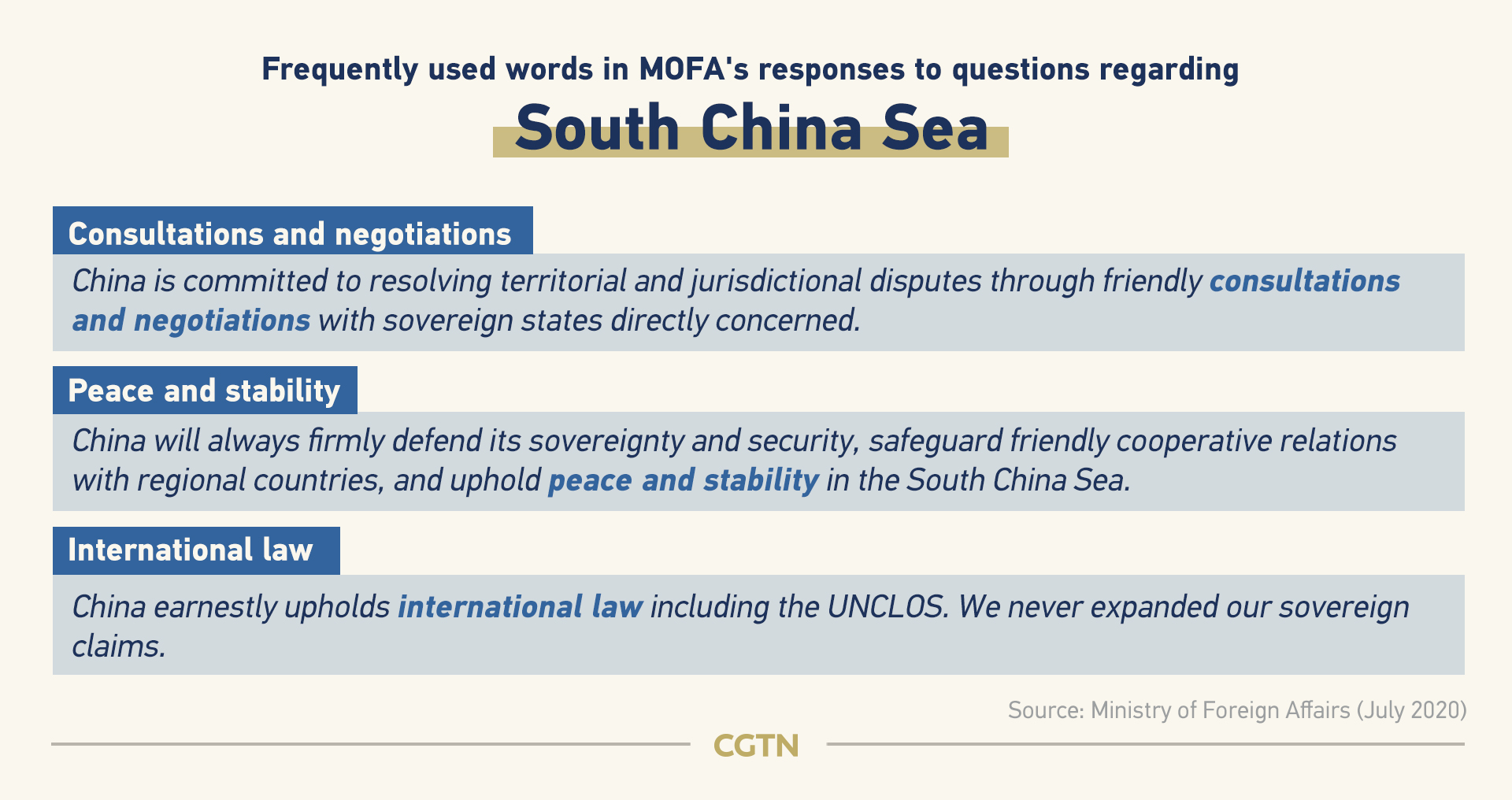 Pompeo also attacked China over the South China Sea, leading the Foreign Ministry to stress the country's commitment to upholding "peace and stability" and resolve any disputes "through friendly consultations and negotiations." 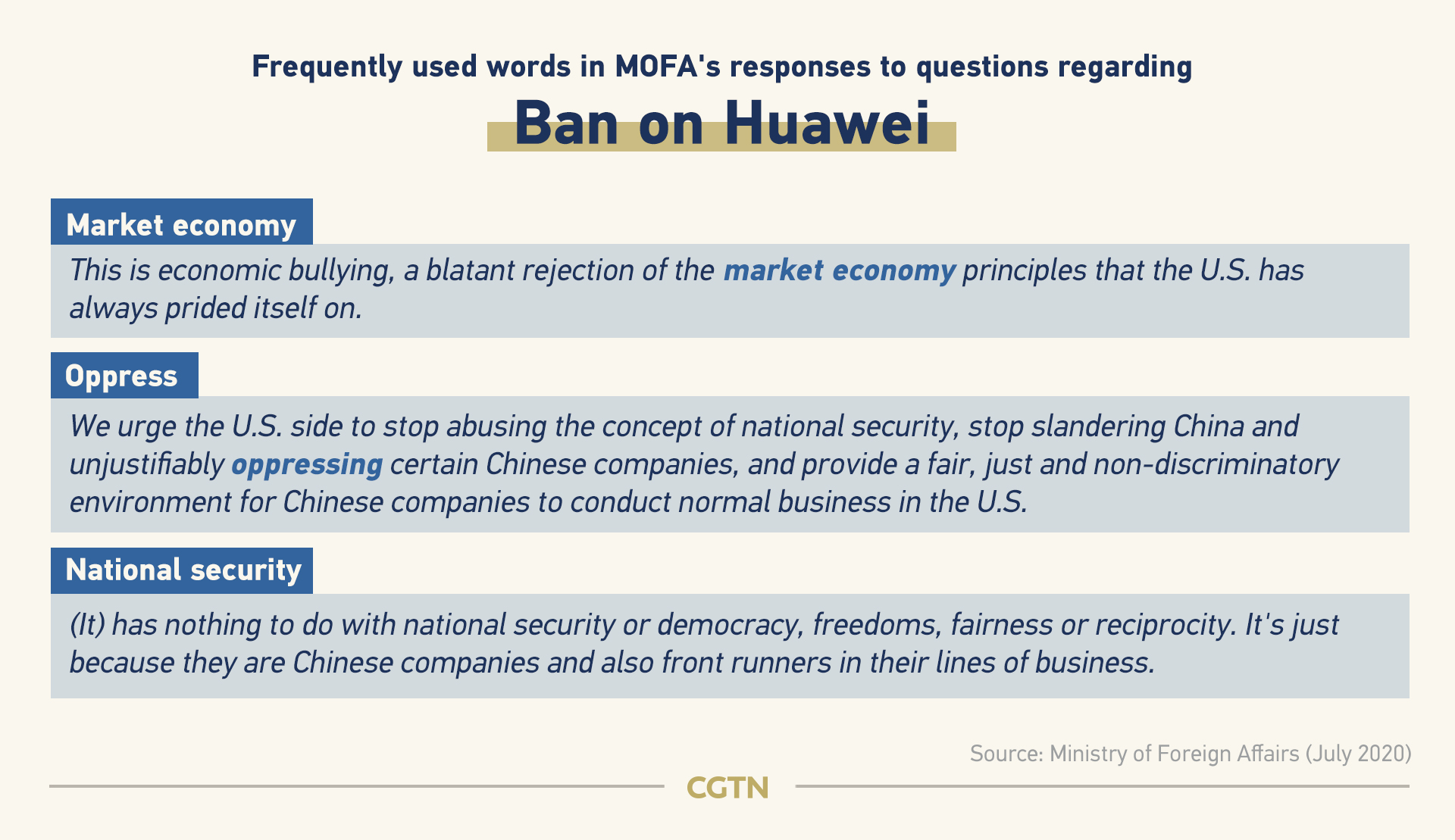 The Foreign Ministry reacted to the U.S. crackdown on Huawei by describing it as "economic bullying" and saying Washington was "unjustifiably oppressing Chinese companies." 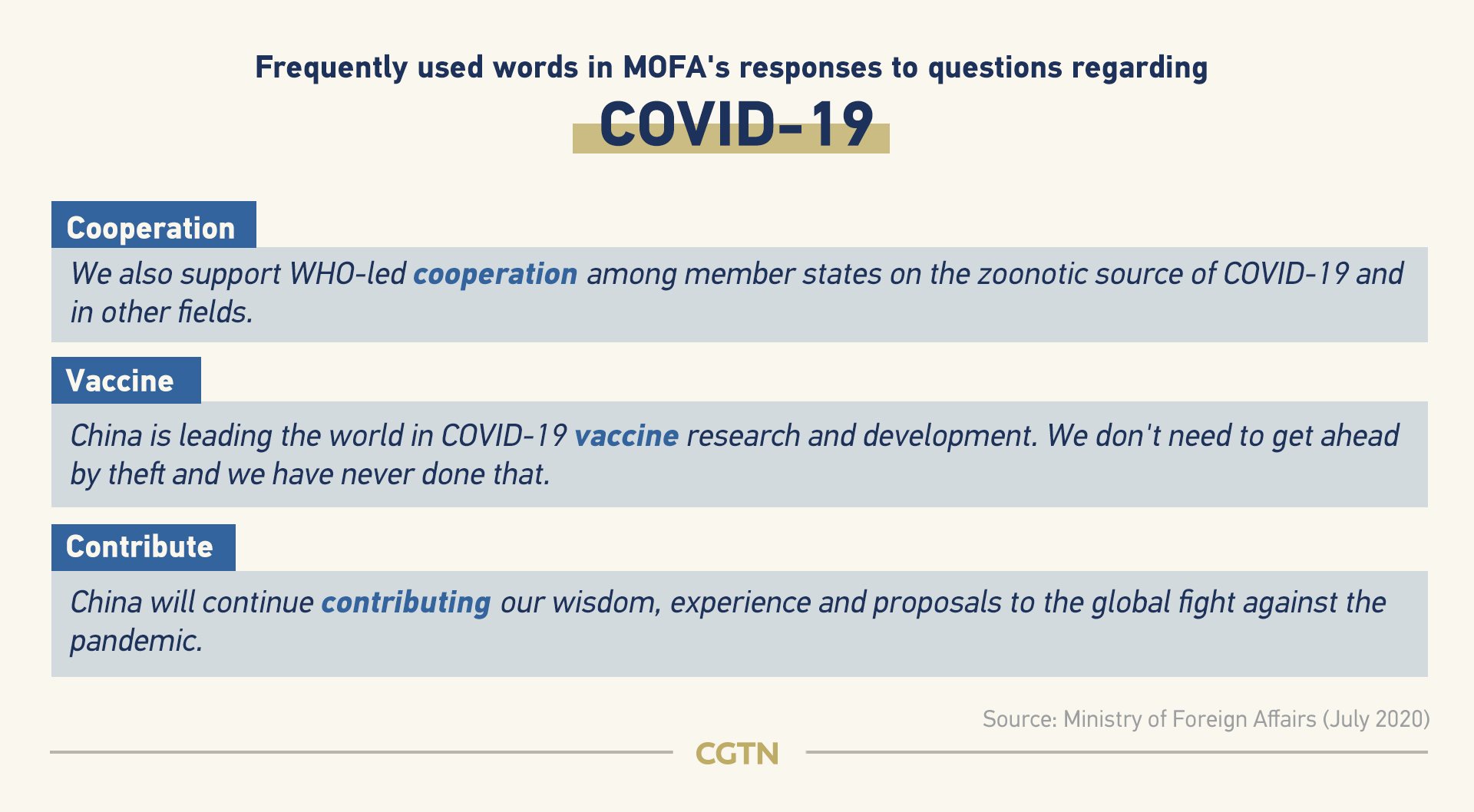 The COVID-19 pandemic has also drawn some sharp words from the United States. China has repeatedly stressed its faith in "WHO-led cooperation" to determine the zoonotic source of the virus that causes the disease, and vowed to "continue contributing our wisdom, experience and proposals to the global fight against the pandemic."

Overall, the spokespeople's comments suggest that Beijing is keen to tell Washington and the world that it wants to avoid confrontation, wants to "put the relations back on track" and wants respect in the relationship.

After weeks of escalation, Wang Yi told French Foreign Minister Jean-Yves Le Drian that China and the U.S. should engage in rational communication but China will respond firmly to power politics.

Wang said the motives behind the attacks on China are the need to lift electoral prospects and the desire to maintain unipolar hegemony. He warned that fallout from deteriorating China-U.S. relations would not only harm the interests of the two countries but lead to worldwide division.