Graphics: Did Biden or Trump win the battle of the conventions?
By Zhao Hong, John Goodrich 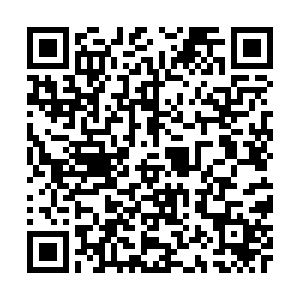 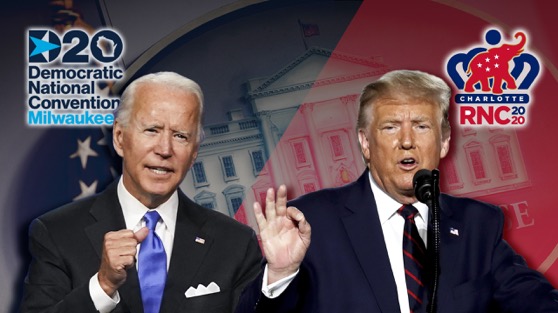 Convention season is over in the United States and the country is now set for a bruising two-month sprint to election day on November 3.

Donald Trump wrapped up the Republican National Convention on Thursday night, following on from Joe Biden's acceptance of the Democratic nomination at his party's event a week earlier.

How did Trump and Biden's speeches compare, who won the ratings and fundraising wars, and what did the conventions tell us about the remainder of the presidential race?

The two conventions were starkly different events with competing missions, best illustrated by the setting and content of the two candidates' acceptance speeches.

Biden's was delivered to a near-empty ballroom from a convention center close to his Delaware home; Trump spoke in front of a crowd of around 1,500 people from the South Lawn of the White House.

Whereas the Biden campaign sought to portray responsibility in a time of crisis by avoiding mass gatherings, the Republicans largely avoided talking about the pandemic at all – despite over 4,000 Americans dying from COVID-19 during the span of the four-day convention alone.

Trump's decision to speak in front of a mask-free crowd without social distancing measures in place reinforced the impression he wanted to put COVID-19 in the rearview mirror. A poll this week by the NORC Center for Public Affairs Research for the Associated Press suggested only 31 percent of Americans approve of his handling of the pandemic.

The president's most associated words when talking about COVID-19 were "vaccine" in an attempt to offer hope – and a pre-election vaccine announcement seems possible – and "China" in an attempt to shift blame. 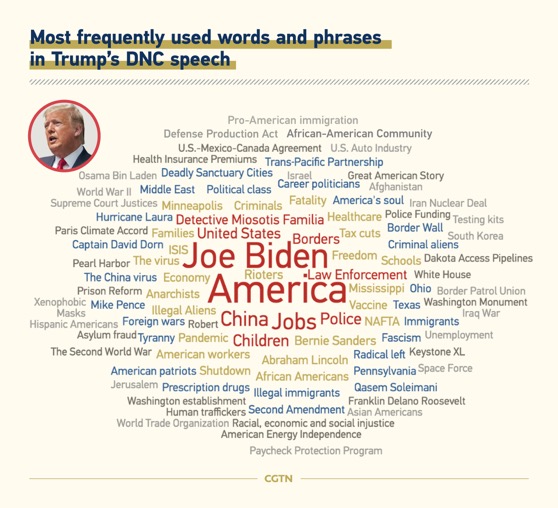 Trump's speech was 70 minutes long, repetitive and sometimes unstructured, perhaps reflecting the difficulty the campaign has had both in pinning down what the president wants to do if re-elected and how best to attack Biden.

The election is currently a referendum on the Republican's job performance. Trump used the word "Biden" 41 times during his speech, more than any term other than "America," an indication of his need to recast the race as a choice between the two candidacies rather than simply for or against his own.

However, the address echoed the mixed messages of earlier speakers. Sometimes Biden was a "weak" Trojan horse for the "radical left," at others he was a "career politician" and member of the "Washington establishment." 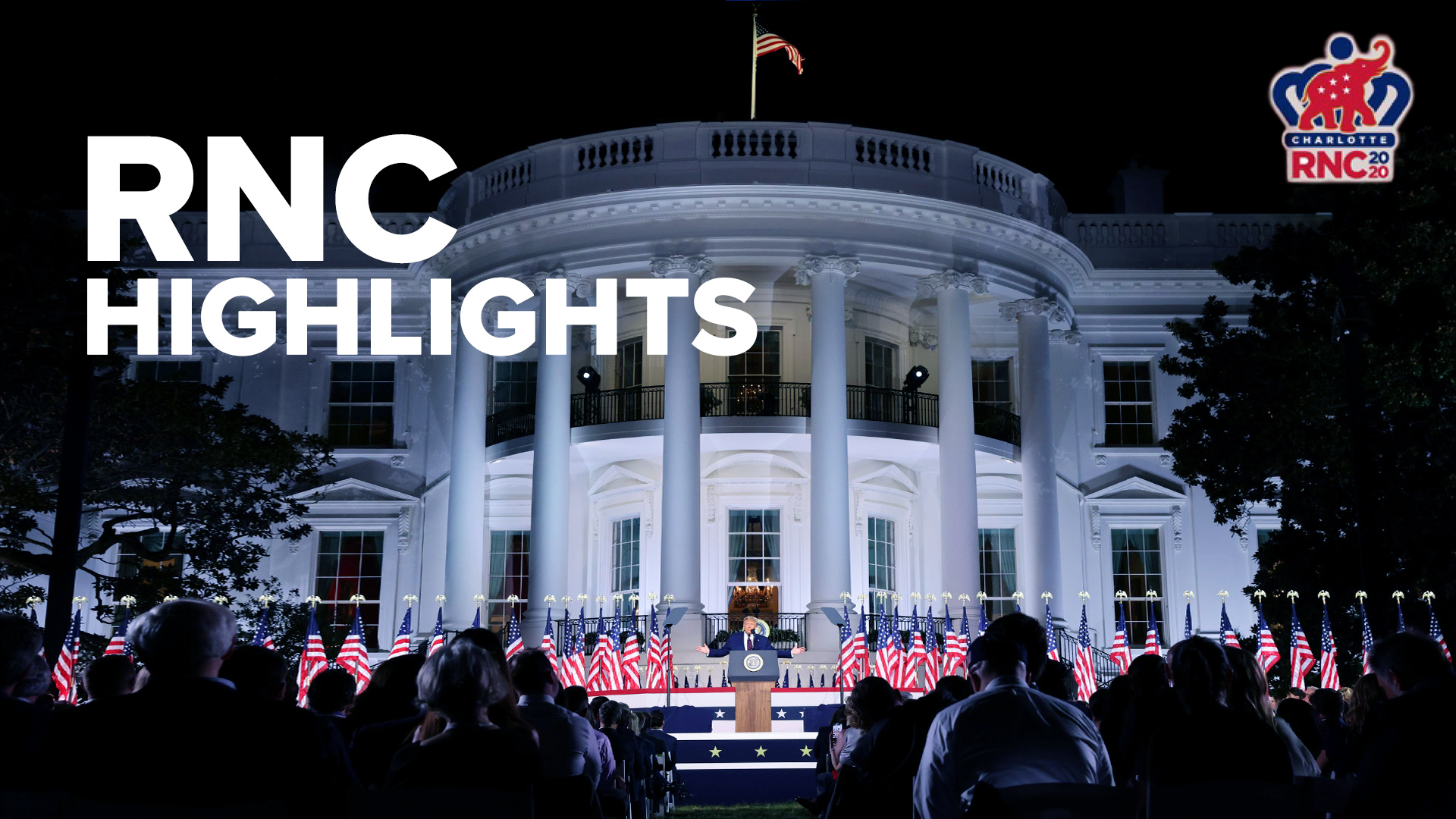 Before the pandemic hit, the Trump 2020 campaign was to be centered around the economy. The president still boasted about the pre-pandemic economy during his speech, but omitted to say it collapsed at a 31.7 percent annual rate in the second quarter and that the unemployment rate was 10.2 percent in July.

Trump has pivoted to a "law and order" message as protests continue in several "Democrat-run" cities, warning that "no one will be safe" under a President Biden, making several references in support of the "police" and frequently using language evoking fear, including "anarchists" and "rioters."

The setting of the speech was spectacular – if controversial, given the ethical questions over using the White House as a prop – but delivering remarks from a teleprompter in humid conditions led to what even Fox News host Chris Wallace described as a "surprisingly flat" speech. 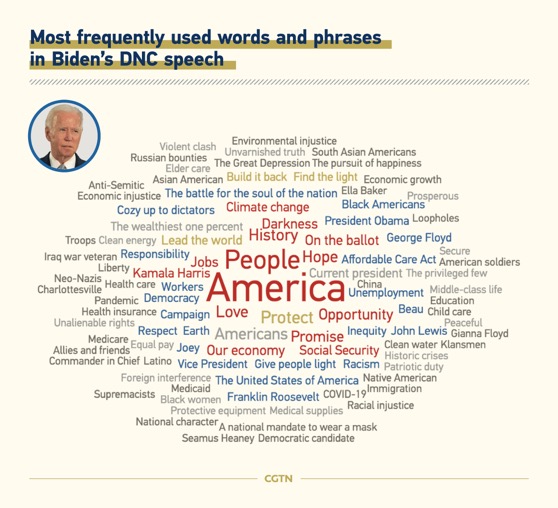 Biden's 24-minute speech was tightly written and, given questions over the former vice president's speaking abilities and propensity for gaffes, exceeded expectations.

The Democrat's case for election was cast in opposition to Trump, yet while he did repeatedly promise "light" rather than "darkness" he did not mention the president by name once during his speech.

While the 77-year-old made dire warnings about a second Trump term, the speech was also peppered with positive language including regular mentions of "hope," "love" and "opportunity." 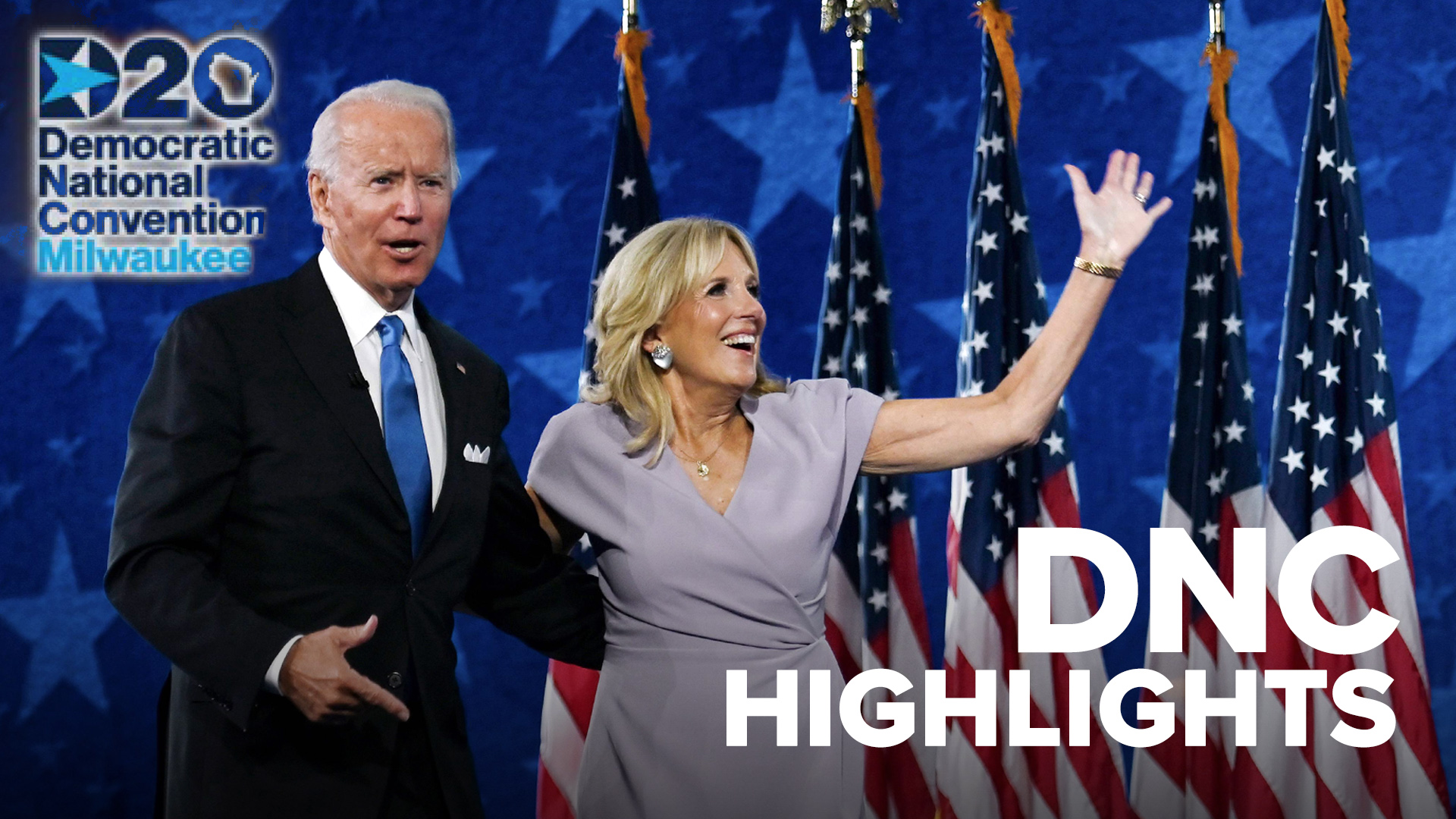 Biden was light on policy specifics, but touched on favored Democratic issues like climate change and healthcare. He also spoke in personal terms about his life, family and challenges, but there was no mention of Trump's "impeachment" despite the president's trial taking place just six months ago.

Whereas the Republicans chose not to mention Jacob Blake, the Black man shot seven times by police in Wisconsin last Sunday, Biden made several references to George Floyd, whose killing in Minnesota in May sparked a wave of protests against racial injustice.

The speech was delivered in the manner of a presidential address, straight to camera from a telepromter, conditions that probably helped Biden. Fox News' Wallace praised the speech as "enormously effective."

The identities of the Democratic and Republican speakers were indicative of the state of the two parties heading into the election.

The Republicans had 70 speakers across their four 150-minute broadcasts, while the Democrats had 54 over four 120-minute programs.

Both conventions included diverse lineups and featured everyday Americans talking about ways in which politics had impacted them for good or bad, and expressing support for the parties' core issues.

Given that most speeches were pre-recorded, there were fewer party functionaries and more personal stories than previous conventions.

However, the headline speakers revealed stark differences between the parties in this election cycle.

The Democrats had the Obamas and the Clintons, as well as progressives Bernie Sanders and Alexandria Ocasio-Cortez and sometime Republicans John Kasich and Colin Powell. The party also had celebrity appeal, with appearances by sports, music and Hollywood stars.

The big tent may come under strain once the voting is over, but Democrats are putting on a united front until November 3.

The Republicans attempted to broaden their appeal beyond the Trump base by featuring some locally-elected Democrats who are opposed to Biden and a diverse range of speakers, as well as giving platforms to possible future stars like Daniel Cameron and Nikki Haley. The party desperately needs to win back female and older voters who have drifted away from it since 2016.

However, there was little representation for establishment Republicans. Neither former President George W. Bush nor 2012 nominee Mitt Romney were involved. Proceedings were dominated by the Trump family: the president appeared every evening, and his wife, four of his children and two of his children's partners gave speeches.

The overall impression was of Democrats offering a broad anti-Trump option, and the Republicans attempting to broaden their appeal but dominated by the president and his family.

The ratings and the money

Trump regularly talks up his impact on the ratings of TV shows, but data from Nielsen suggests the Republican National Convention received fewer viewers than the Democratic event.

Even more galling for the president, who claimed in a tweet on Friday that "the Republicans blow the Dem Numbers away" on online views, 21.8 million people watched Biden's acceptance speech against 19.7 million who saw him accept the Republican nomination.

No official data is available for the number of people who streamed the conventions online. 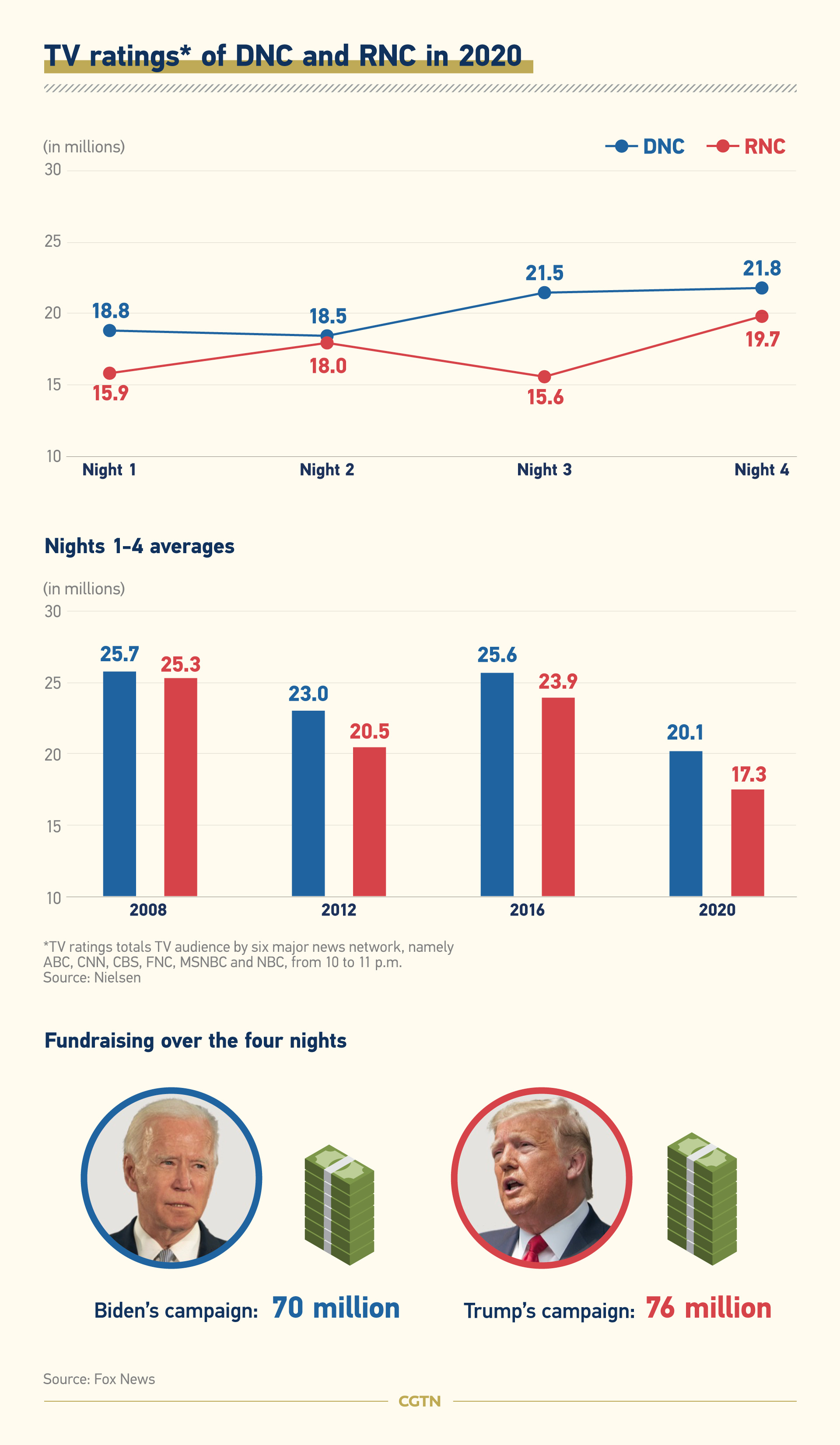 The Democrat's attracted around 2.5 million more TV viewers per night than the Republicans on average, with the biggest margin on the third night – when the vice presidential contenders spoke.

Around 21.5 million people tuned in to see Kamala Harris and Barack Obama give live addresses, but only 15.6 million watched Mike Pence speak.

The respective average viewing figures are down on the past three conventions, possibly a reflection of changes in viewing habits and the reduced appeal of largely pre-recorded events.

Conventions are traditionally opportunities to bring in big fundraising hauls, and in the money stakes – according to figures from the respective campaigns – the Republicans came out on top, raising 76 million U.S. dollars over four days against 70 million for the Democrats.

Federal Election Commission figures suggest Trump had a 21 million U.S. dollar cash-on-hand advantage at the end of July, though with the scale of donations increasing and advertising buys ramping up as election day nears those numbers are fluid. 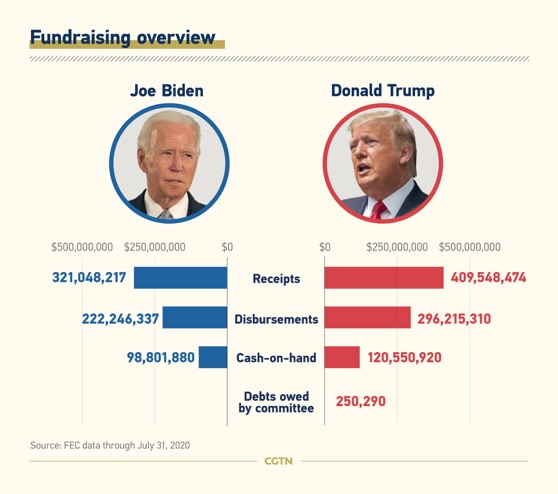 Polling data on a "convention bounce" for the Republicans won't be available for several days. Both Trump and Democratic nominee Hillary Clinton enjoyed post-convention boosts of four points in 2016, but in the wake of the Democratic event this year there was little evidence of movement.

Reception for the Democratic convention was broadly positive, so the lack of bounce for Biden – whose favorability ratings did tick up – may reflect a limited impact of virtual conventions, the increasingly polarized state of U.S. politics or just that there are relatively few undecided voters in 2020.

Biden continues to hold an average national polling lead of around seven points over Trump, according to RealClearPolitics.