Swing states: Wisconsin - Back in Democrats' pocket in 2020?
CGTN 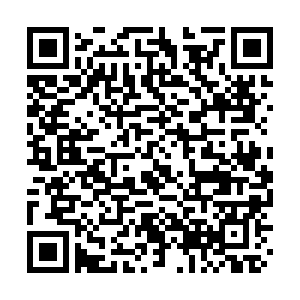 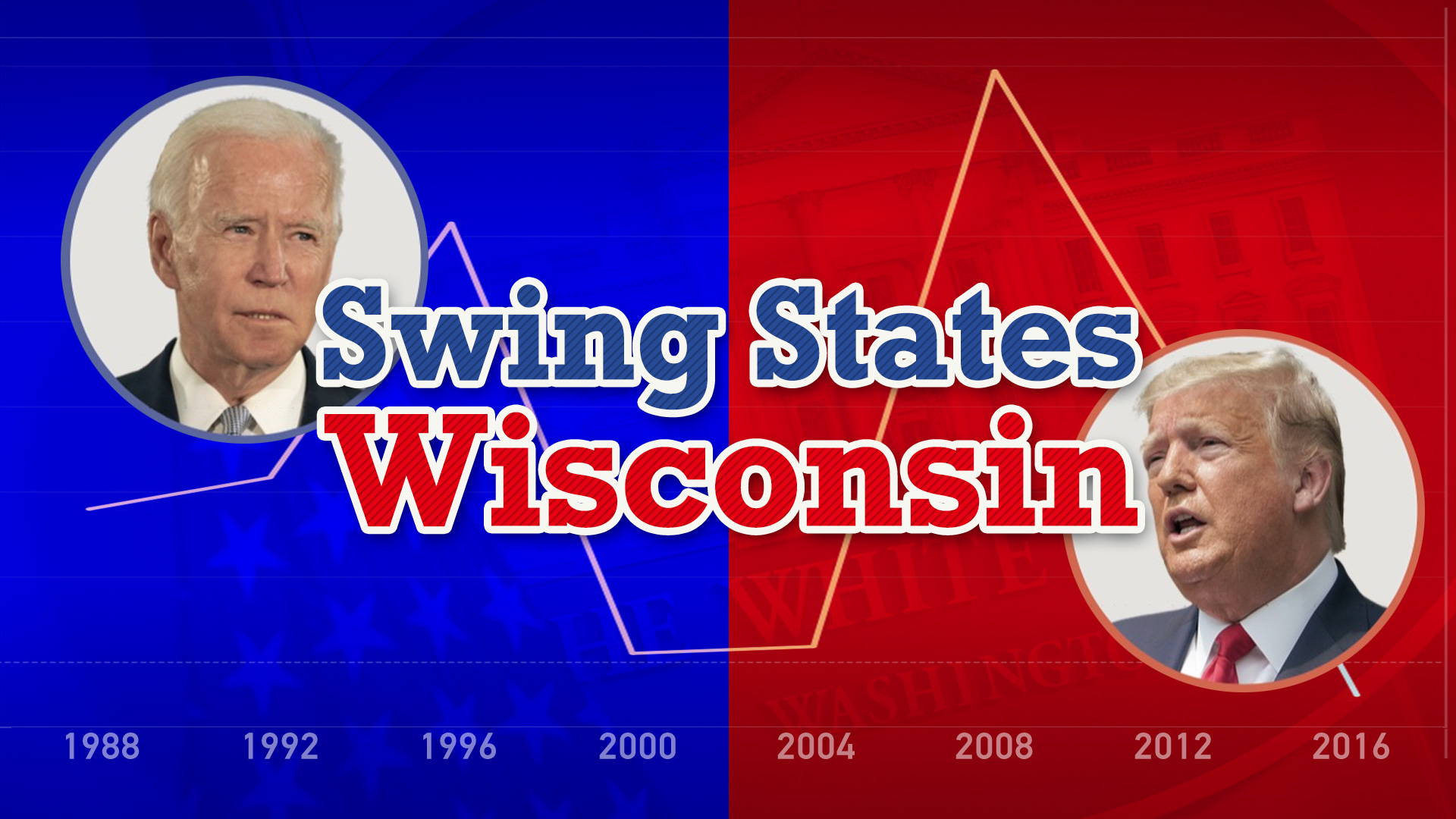 As a state that had been delivered to the blue camp for more than two decades, Wisconsin was once considered a reliable base for Democrats. But 2016 changed the story. With Donald Trump securing its 10 electoral votes in a narrow win against Hillary Clinton, Wisconsin has since become a fluid state.

Why does Wisconsin matter?

Along with Pennsylvania and Michigan, Wisconsin forms the three Midwestern "blue wall" states that Democrats managed to keep until 2016. Clinton's wholesale loss of the three states proved fatal for her bid to become president. The Biden campaign is now dead set on retaking the three states. 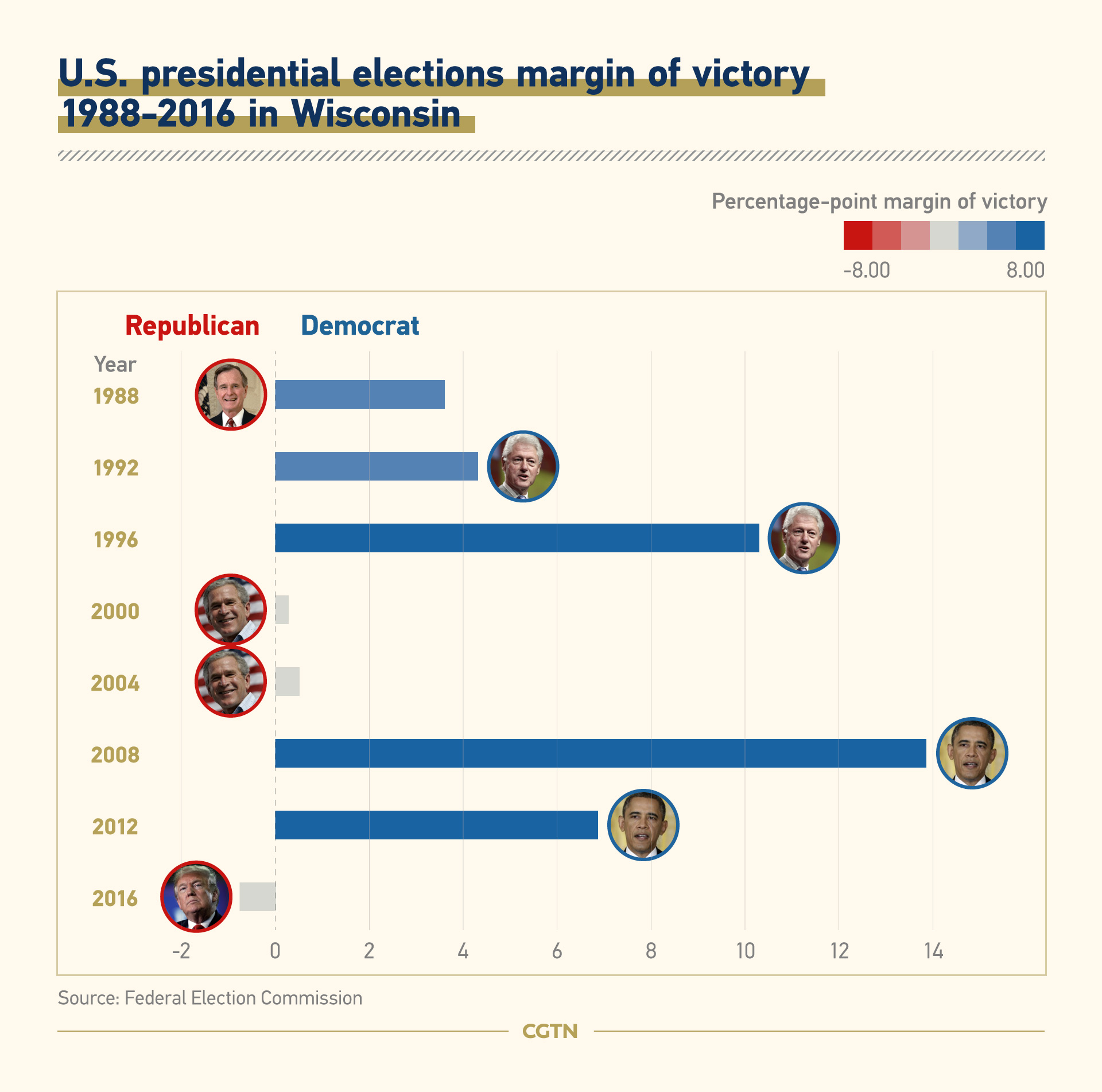 While Republicans control both chambers of Wisconsin's state legislature, recent strides made by Democrats in the state have shown signs of the 5.8-million population trending towards the blue camp. In a special election for a seat on the state's Supreme Court, liberal candidate Jill Karofsky defeated incumbent Daniel Kelly by more than 10 percentage points. In 2018, Tony Evers, a Democrat, also unseated former Republican Governor Scott Walker.

Who are the Wisconsin voters?

Wisconsin's population is predominantly white, with whites accounting for 81 percent of the demographic makeup. The decline of the manufacturing industry has led to job losses in the state, and one of the key factors that contributed to Clinton's 2016 loss was her failure to garner white working-class voters' support. Trump's emphasis on the economy largely contributed to his win that year.

In 2018's gubernatorial election, Evers was able to snatch youth and college graduates' votes which went to Walker in 2014, and that was largely because of Democrats' successful bid to keep a key piece of federal health legislation, the Affordable Care Act, from being repealed by Republicans. Through the health law, many people under 26 years old could stay on their parents' health insurance. If it was repealed and replaced, they risked losing that coverage.

Election 2020: How the Affordable Care Act is taking center stage 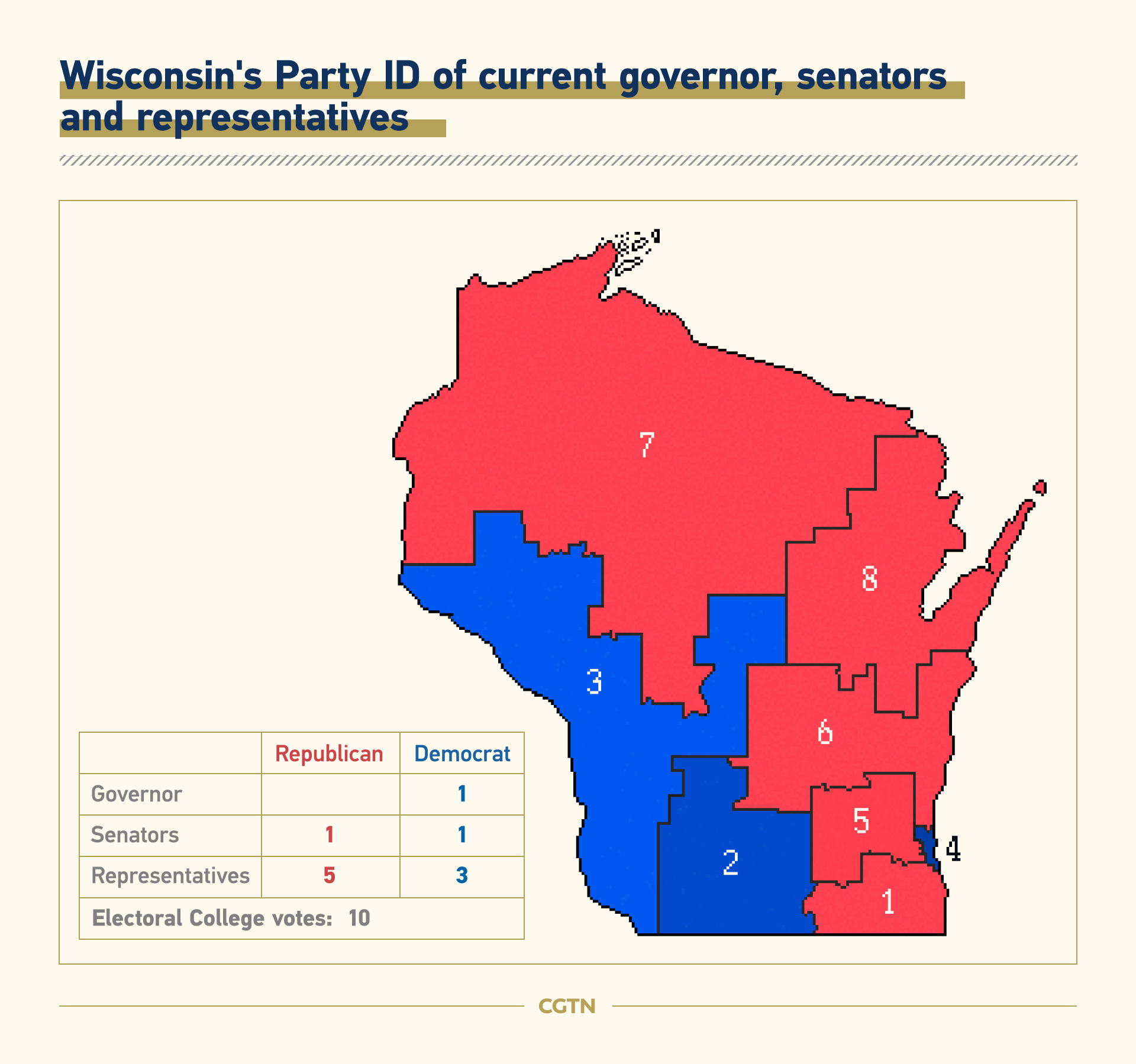 Recent polls in Wisconsin suggest white women and college graduates have become the two groups weakening Trump's lead among the state's white population, but whites with no college degree maintain strong support for the president.

After the party conventions, polls have indicated growing support among white voters for Trump, a key factor leading to the recent narrowing of Biden's lead among all likely voters in Wisconsin.

Though voters of color make up a small part of the state's electorate, their increasing disapproval of Trump is the main factor maintaining Biden's polling lead. 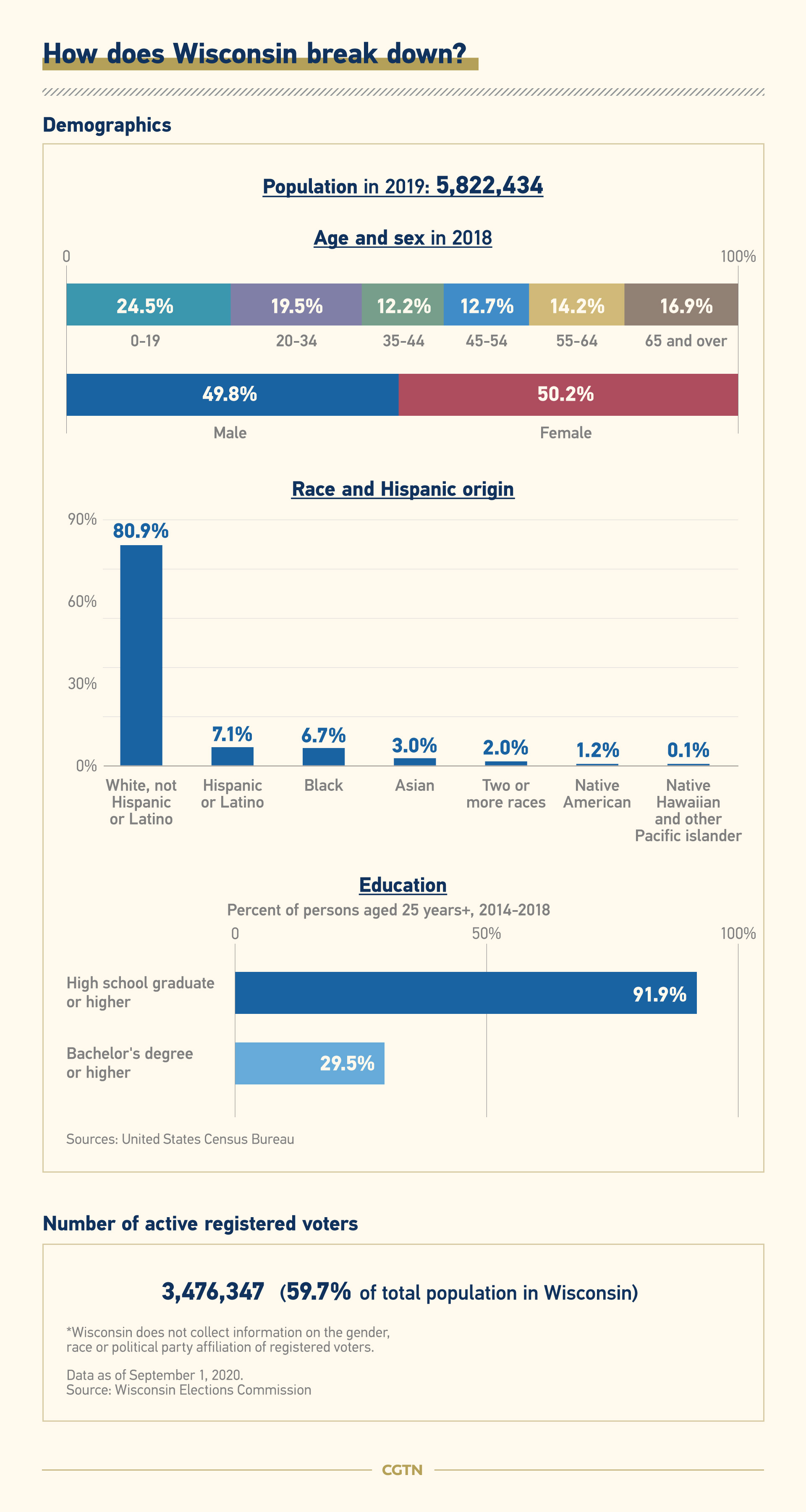 Trump's repeated attacks on mail-in voting may not serve him well in Wisconsin. As Republicans in the state have been known to use mail-in voting for many years, Trump's dismissal of it may end up suppressing his own base.

In April, Wisconsin became the first state to hold an in-person primary during the pandemic. Governor Evers had tried to postpone the primary and extend access to mail-in voting but failed. That primary exposed a slew of problems - a reduced number of polling locations, major staffing shortages and the limitations on mail-in voting, which ultimately led to people waiting in long lines before each voting station. All these have served as warnings ahead of the general election.

Over 100,000 people in Wisconsin have contracted COVID-19, and more than 1,250 people in the state have died from the disease. Many residents are blaming Trump for mishandling the pandemic. 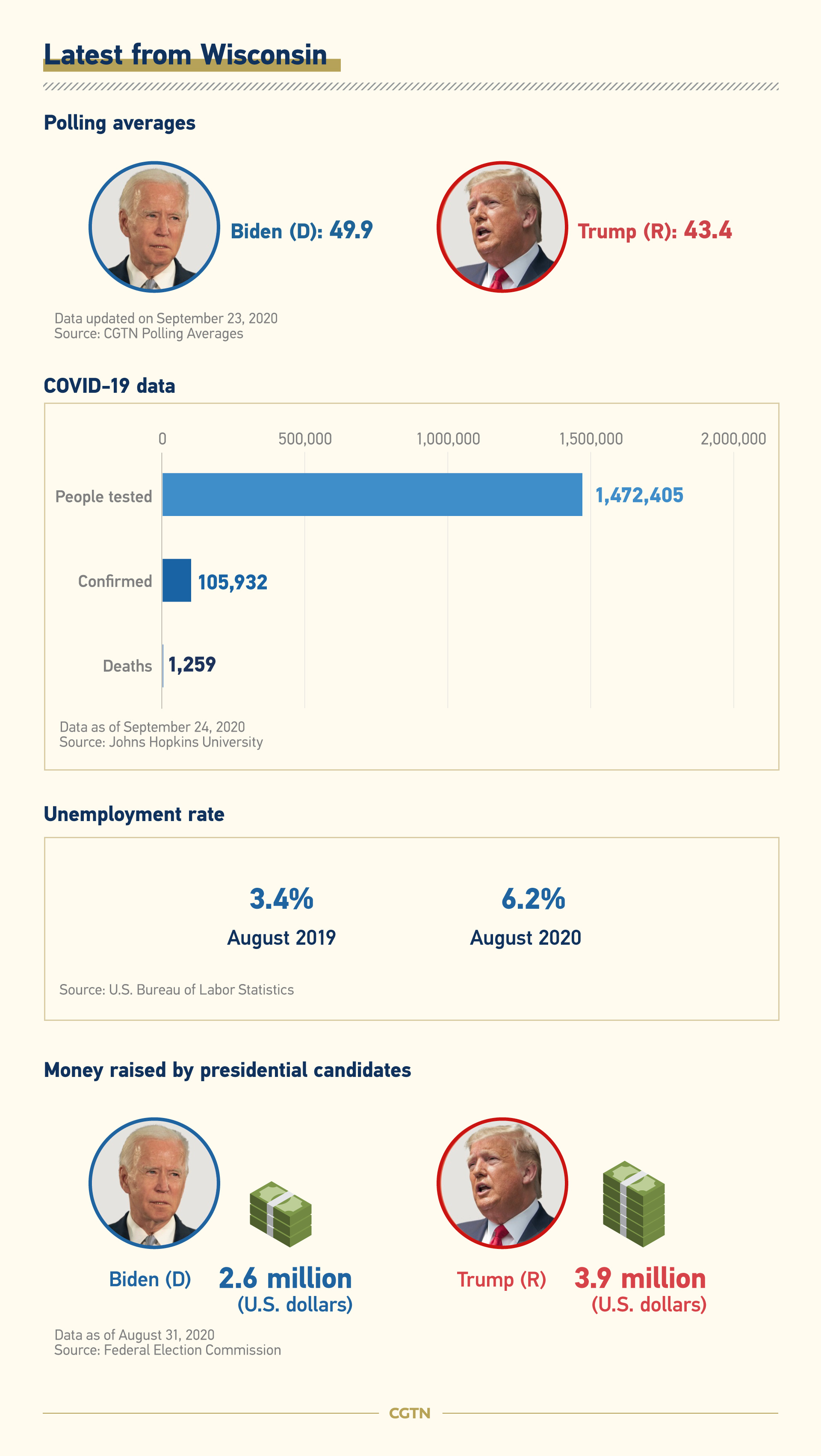 Racial justice and law and order

Nationally, the Black Lives Matter movement sparked by the police killing of George Floyd has become the dominant series of events enveloping the latter half of 2020, bringing the issues of racial justice and law and order into sharp focus.

In late August, the police shooting of yet another Black man, Jacob Blake, in Kenosha, Wisconsin, triggered a new wave of protests and unrest. In separate days after their respective conventions, both candidates traveled to the city with an entirely opposite emphasis.

Biden acknowledged there is systemic racism in the criminal justice system, but Trump rejected it. Biden spent about an hour with the Blake family, while Trump declined to meet them because they wanted lawyers present. Biden extended sympathies to the Black community and called for national unity, whereas Trump touted his program of Operation Legend and expressed empathy with police officers who he said have a dangerous job.

What kept the two on the same page was their denunciation of the looting and rioting during the demonstrations. While Biden had previously appeared reluctant to address the issue, at the Democratic Convention he made it unequivocal that lawlessness was not acceptable.

Still, Trump's apparently tougher stance towards the unrest is swaying some voters to his advantage, especially when support for the nationwide anti-racism protests has dipped and when Wisconsin residents had to witness the chaos at close range.

Biden successfully sent strong messages that demonstrated his determination to address racial justice, but his fear of alienating Democratic supporters may have left room for Trump to discourage Wisconsin's swing voters from casting their votes for the former vice president.