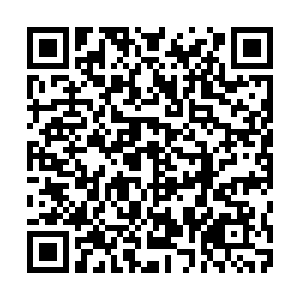 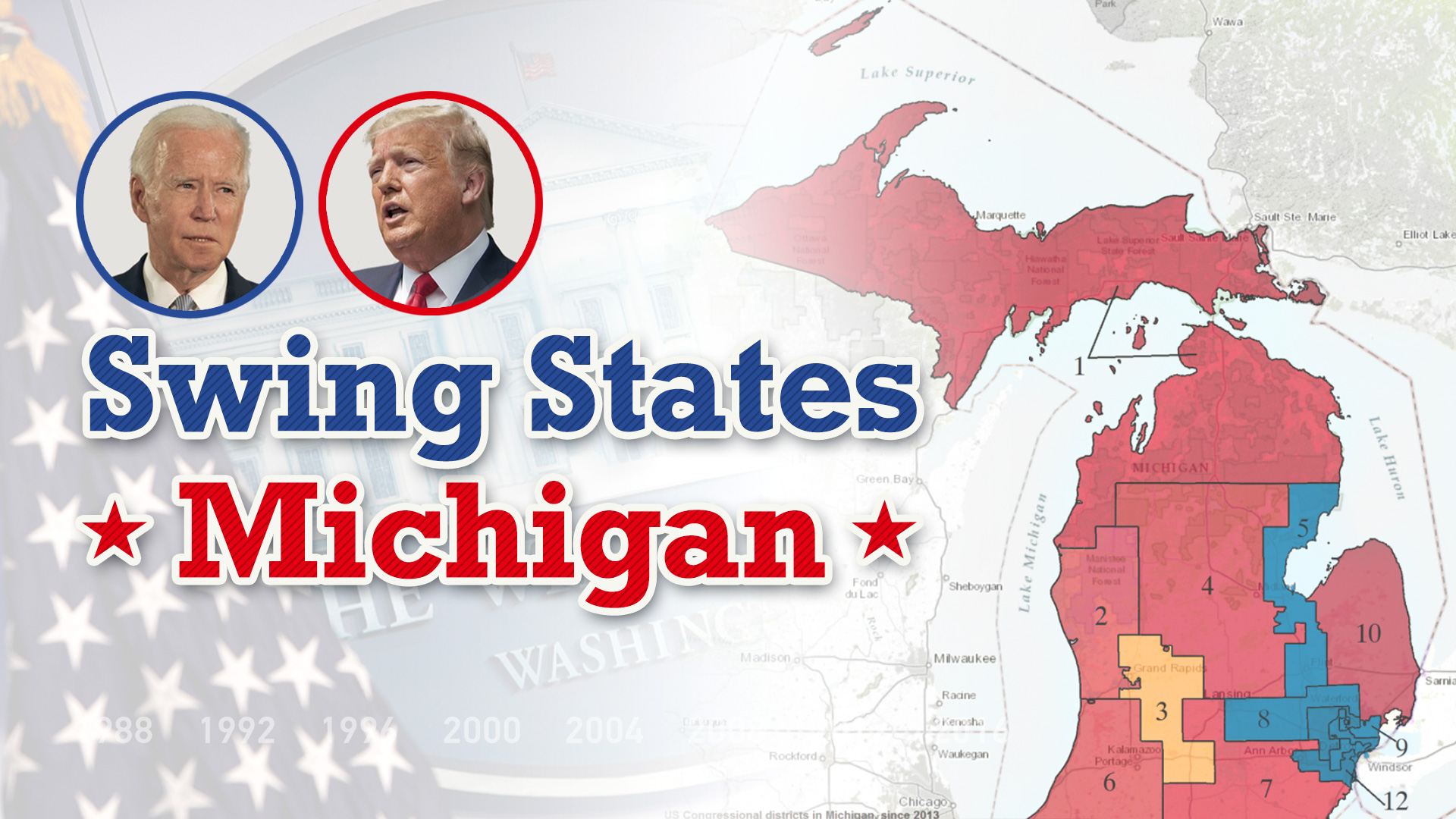 Donald Trump won Michigan's 16 Electoral College votes by fewer than 11,000 votes in 2016, ending a run of six consecutive Democratic presidential election victories in the Midwestern state, but recent trends indicate he faces an uphill battle to defeat challenger Joe Biden there in 2020.

Why does Michigan matter?

Michigan is the third brick in the Democratic Blue Wall, alongside Wisconsin and Pennsylvania, which crumbled in 2016 and put Trump in the White House. 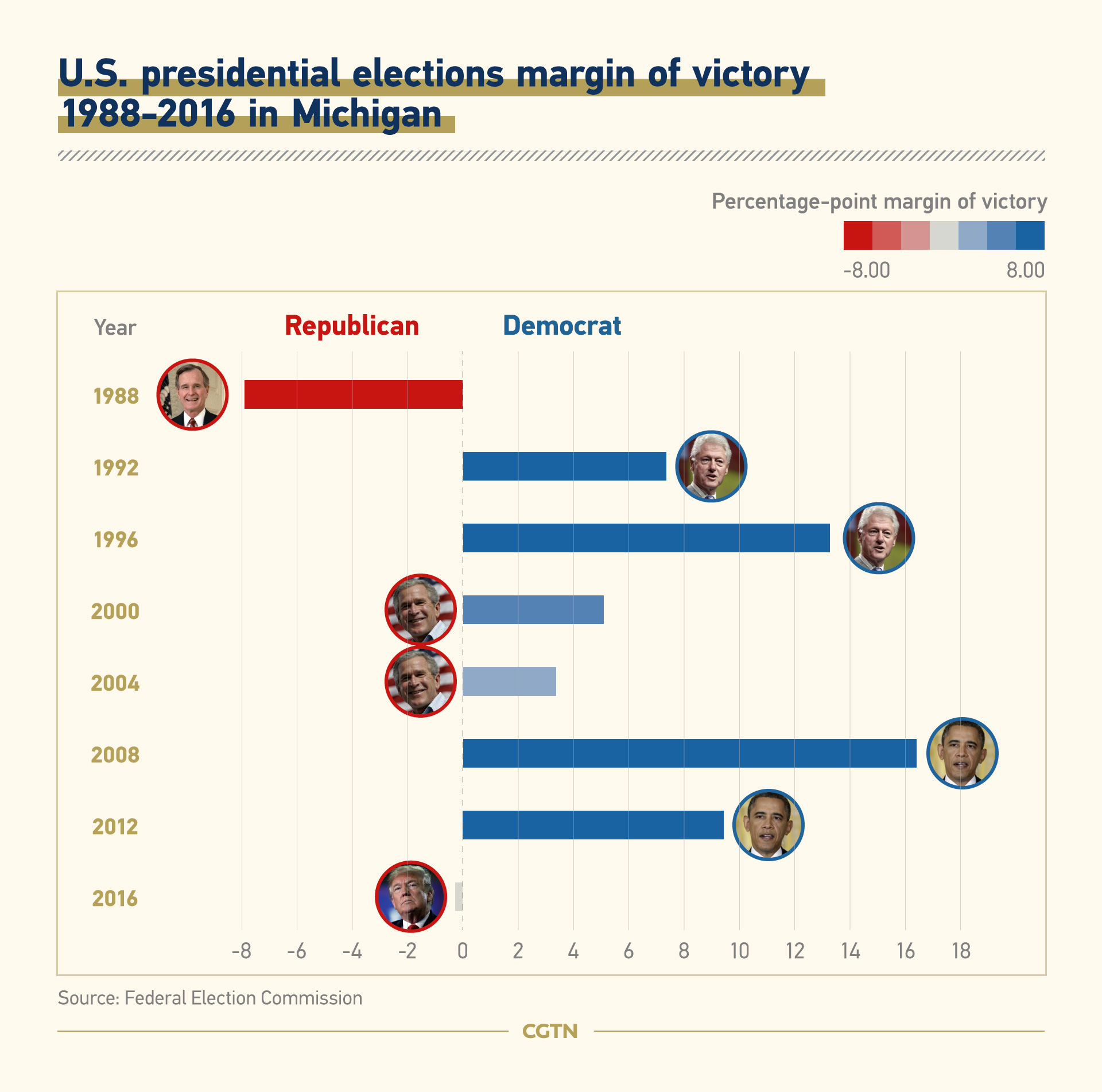 The president doesn't have to hang on to the state to win the Electoral College, but if he loses it he can't afford to drop more than one other battleground. Of the seven scenarios his campaign says could lead to a second term, only two don't include Michigan. For Biden, a Wolverine State victory would be a big step towards rebuilding the map which made Barack Obama president.

Michigan hadn't voted for a Republican in a presidential election since 1988 and George H.W. Bush. And four years after Obama won it by 10 points, while Hillary Clinton appeared to take victory in the state for granted in 2016. Unlike Clinton, Biden won the Democratic primary – Clinton had lost it to Bernie Sanders – and is in a better spot to appeal to blue-collar workers who flipped to Trump. 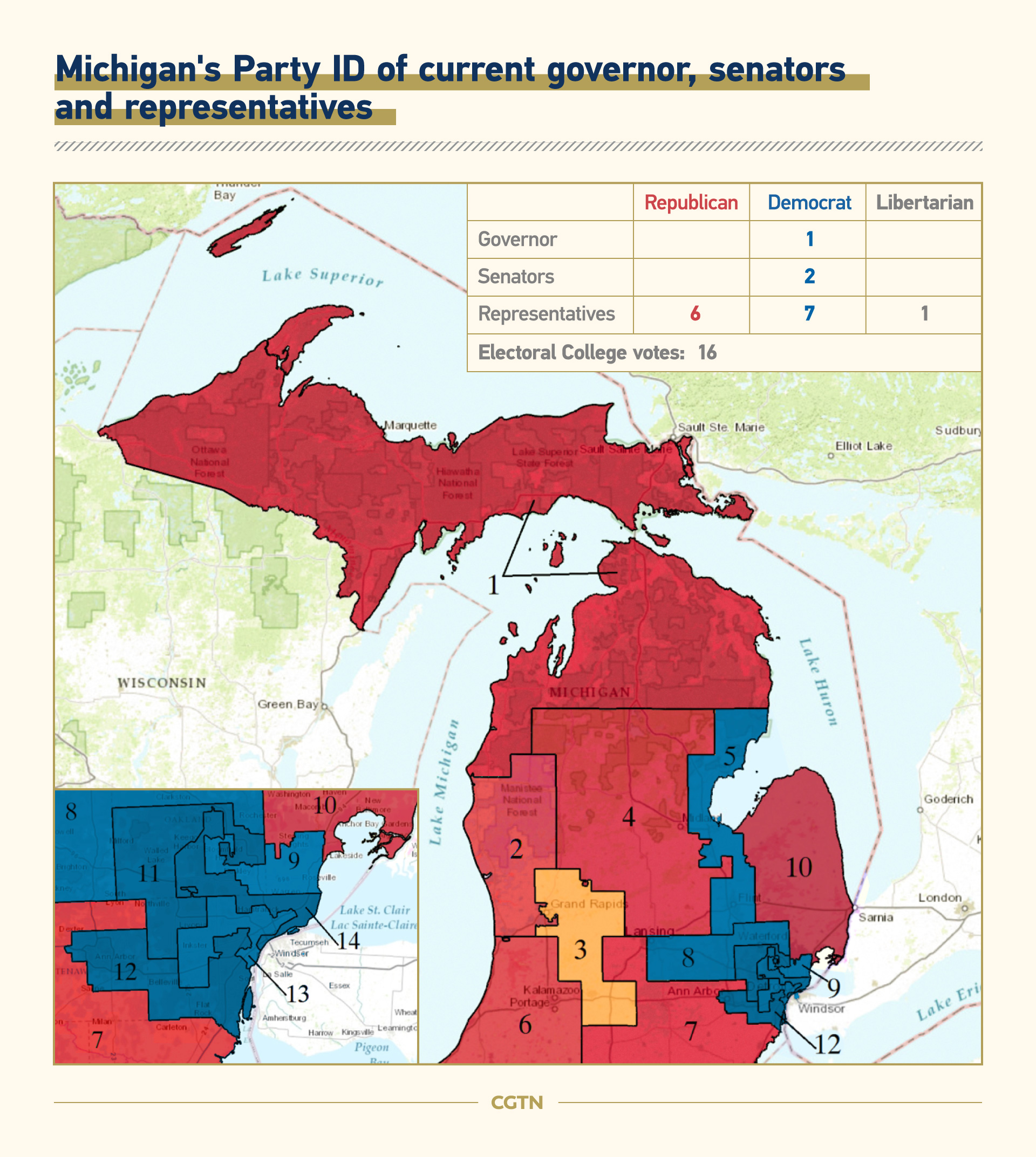 The 2018 midterms suggest momentum in the state is with the Democrats. The party won the governor's mansion, retained a Senate seat and gained two House of Representatives seats.

Who are the Michigan voters?

The majority of Michiganders are white, though there is a large Black population in cities like Detroit, and there are marginally more women than men. More than nine in 10 people aged over 25 have graduated high school, higher than the national average, but only 28.6 percent have a bachelor's degree or higher, around five points lower than the country as a whole.

Clinton lost ground across the state in 2016, winning 90,000 votes fewer than Obama in the traditional Democratic stronghold of Wayne County, which includes Detroit, and dropping by wide margins in less-populous rural areas. Trump gained voters in the suburbs and increased turnout in rural areas, while an unusually high proportion of votes (five percent) went to third party candidates. 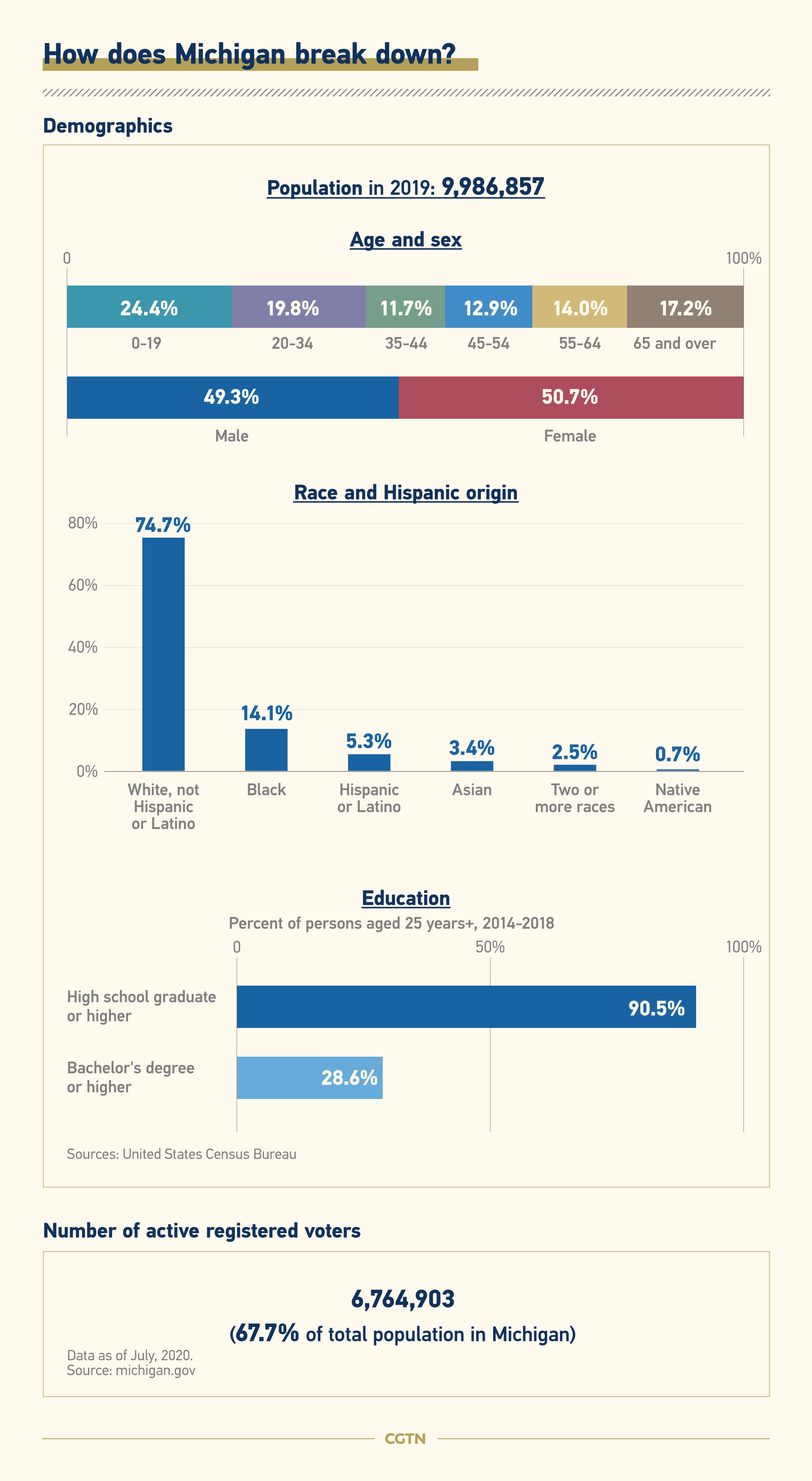 Turnout was higher among white voters in 2016 compared to 2012, but fewer Black and Latino voters went to the polls.

Biden will hope to turn out more urban and minority voters, repeat the 2018 Democratic success in the suburbs and peel off blue-collar workers. The president is trying to hammer home his "law and order" message and win back suburbanites while retaining high rural support.

Biden goes into the final six weeks of the election with a 6.8-point lead over Trump in Michigan, according to the latest CGTN average.

- Trade: Trump appealed to blue-collar workers in Michigan in 2016 by promising to bring jobs back from overseas and criticizing NAFTA, the trade deal with Mexico and Canada which he renegotiated. He accused the former vice president of being a "globalist sellout" during a mid-September rally in the state. Biden has stressed his background in support of workers during his campaign appearances in the state, and has talked up his role in supporting the auto industry as Obama's vice president in the wake of the financial crisis. 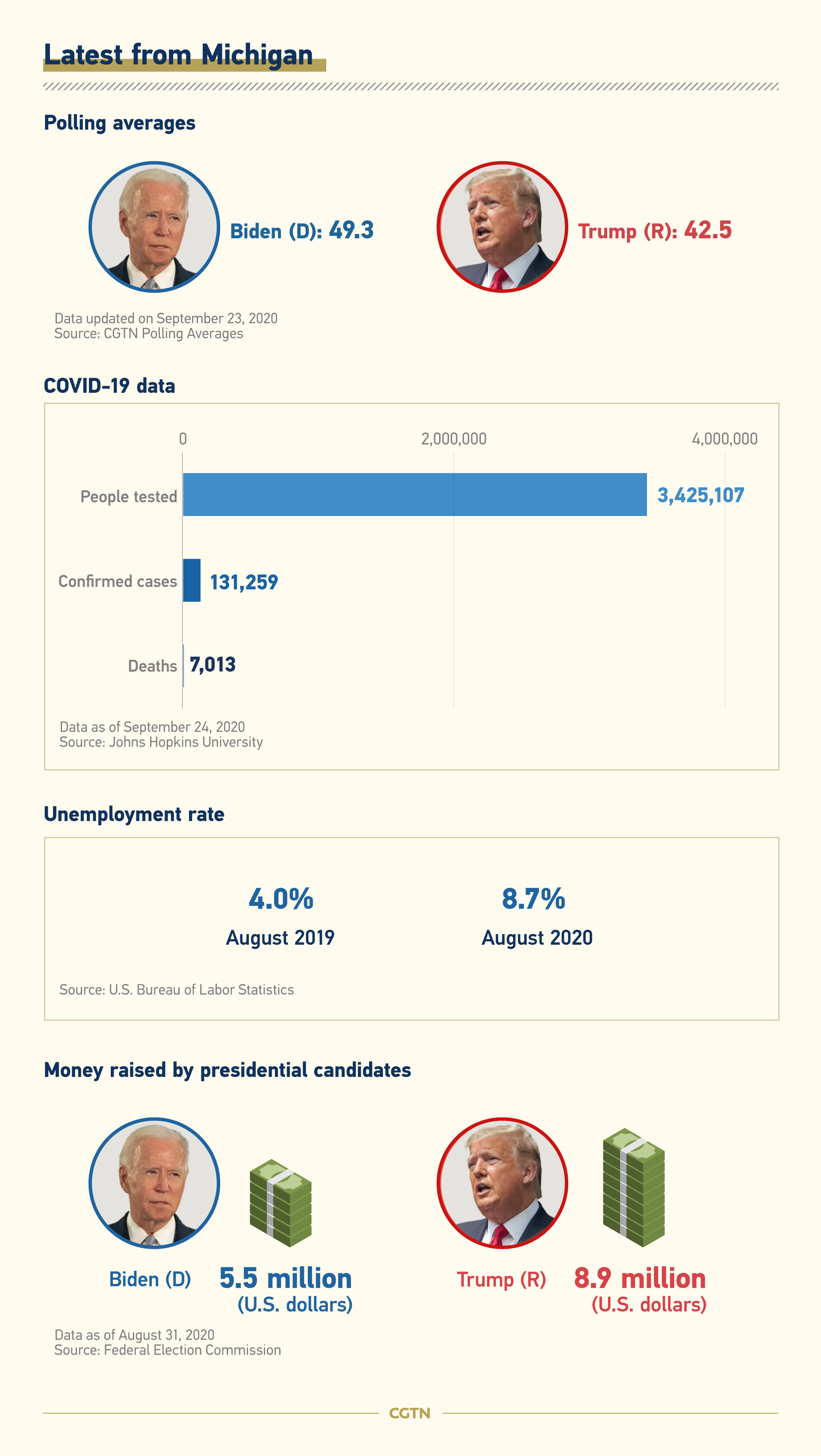 - Gretchen Whitmer: Whitmer, the governor who Trump dismissed as "that woman from Michigan" earlier this year, has been a thorn in the president's side and could be key to turning out voters. Polls indicate six in 10 Michiganders approve of her handling of the COVID-19 pandemic, according to a new Detroit News-WDIV-TV survey, heavily outperforming Trump, who has over 50 percent disapproval on his handling of the crisis in a string of polls. COVID-19 has killed over 7,000 people in Michigan, and could be a decisive electoral issue.

- Mail-in voting: More than one in every two American voters are expected to cast ballots by mail in 2020 as a result of COVID-19. Requests for absentee ballots are already at a record high in state, hitting 2.1 million on September 11. But Michigan struggled to process mail-in votes in August's primaries, with nearly 9,000 – almost the margin by which Trump won the state in 2016 – rejected because of delays or signature queries. If the final tallies are close, how effectively those votes are processed will be in the spotlight in November.