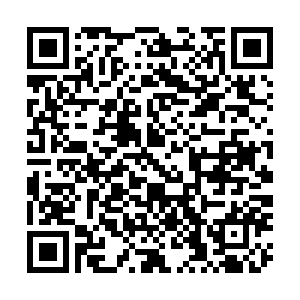 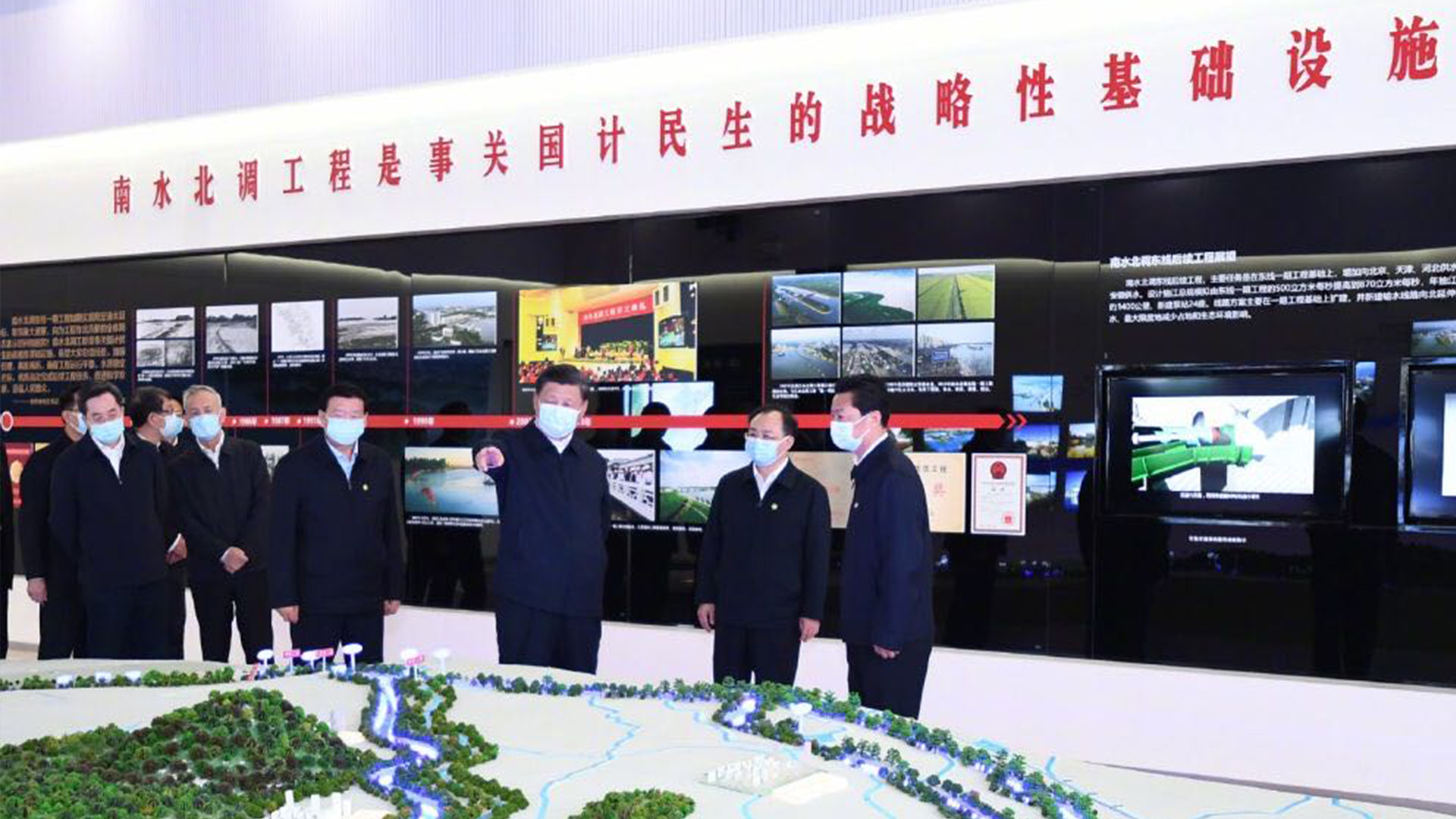 With the unveiling of a blueprint for China's development in the next 15 years, different regions are gearing up for their new roles in the country's new journey toward modernization.

Provinces and municipalities along the Yangtze River – China's longest river – have been given important roles to foster an innovation-driven, green development mode for the world's second-largest economy.

The blueprint – the Communist Party of China (CPC) Central Committee's proposals for formulating the 14th Five-Year Plan (2021-2025) for National Economic and Social Development and the Long-Range Objectives Through the Year 2035 – called for efforts to promote the development of the Yangtze River Economic Belt and the integration of the Yangtze River Delta and create innovation platforms and new growth poles in the regions.

The roles of the Yangtze River Economic Belt and the Yangtze River Delta in the country's overall development are high on the agenda of Chinese President Xi Jinping's ongoing tour in Shanghai Municipality and Jiangsu Province.

It is his first domestic inspection tour after the fifth plenary session of the 19th CPC Central Committee, at which the blueprint was adopted. 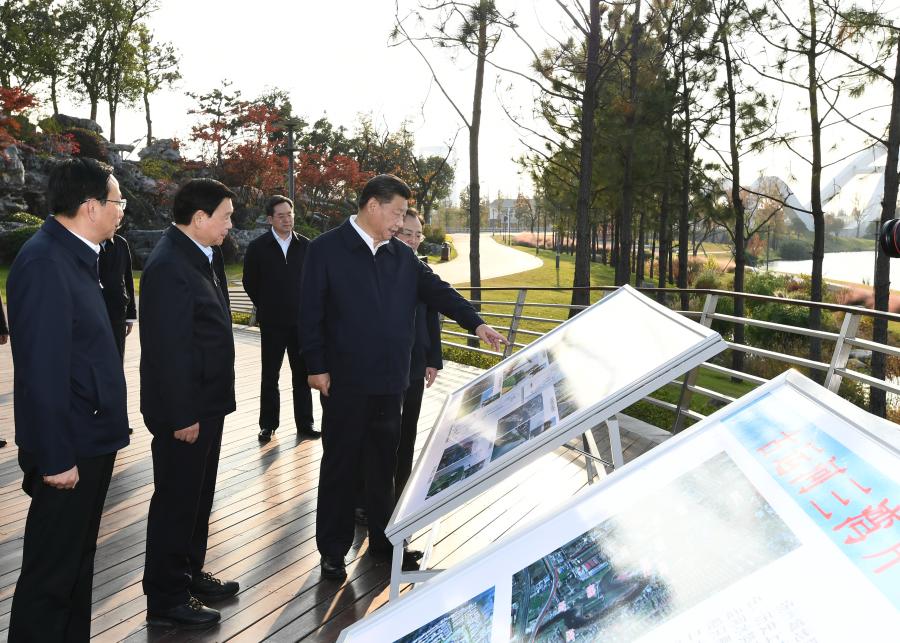 Xi, also general secretary of the CPC Central Committee, attended a grand gathering in Shanghai to celebrate the 30th anniversary of Pudong's development and opening-up on Thursday morning, encouraging the district to "carry the heaviest load" and "crack the hardest nut" in China's reform and modernization drive.

Pudong, located east of the Huangpu River in Shanghai, should strive to become a pioneer of reform and opening-up at a higher level and a vanguard in fully building a modern socialist country, he said in a speech.

The area should strengthen its role as an engine of innovation and make breakthroughs in key and core technologies, he stressed.

On the other hand, efforts should be made to improve Pudong's capabilities in global resource allocation so that it will better serve the establishment of a new development pattern, he added.

The area should play a leading role in the integrated development of the Yangtze River Delta region, he said. 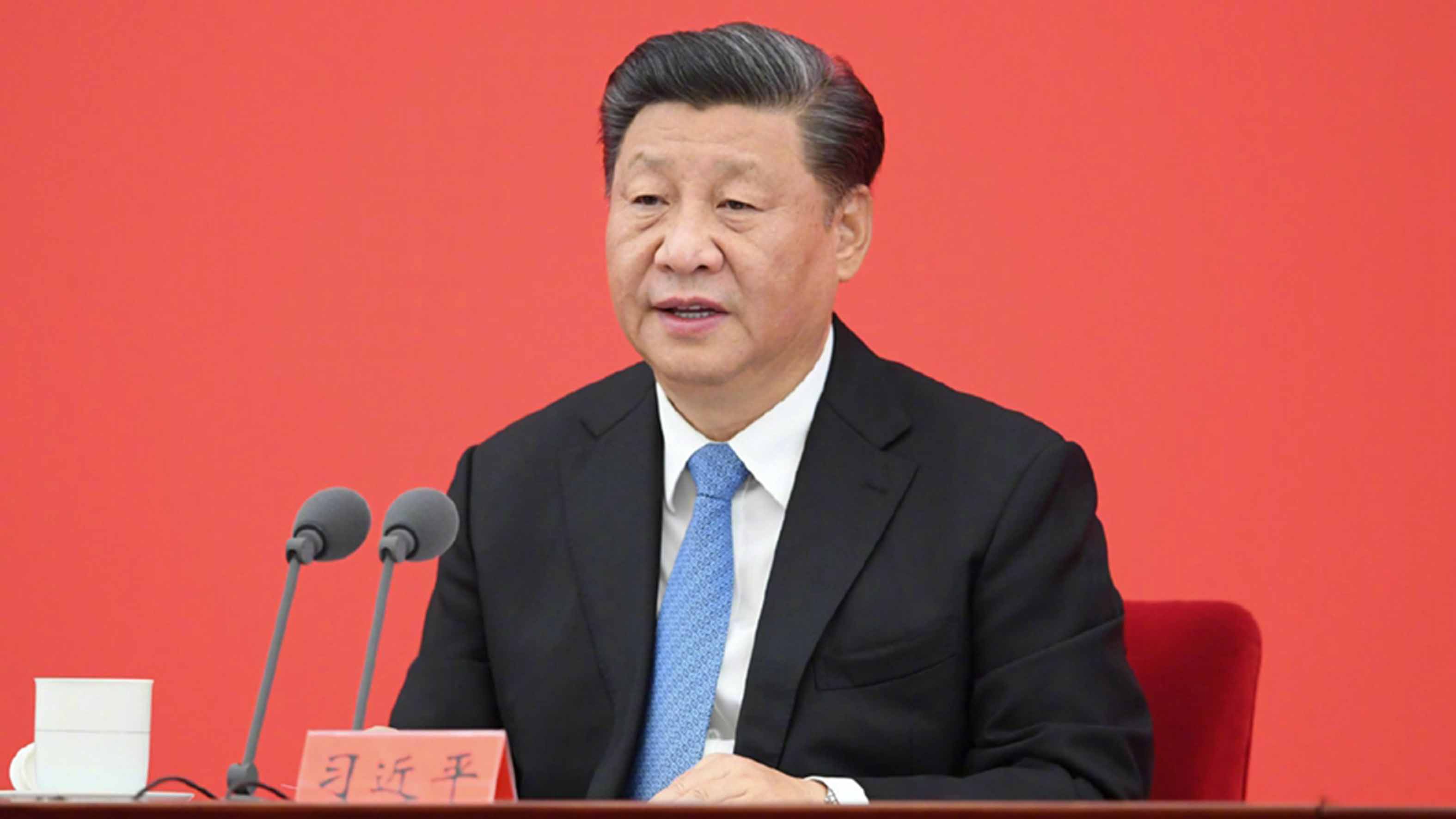 On Thursday afternoon, Xi visited Nantong in the neighboring province of Jiangsu. He first went to Binjiang, a riverside district in Nantong, where he inspected local efforts in improving the overall environment along the shoreline of the Yangtze River, as well as the enforcement of fishing ban policies.

Binjiang, bounded by mountains along the Yangtze River, is considered a "green corridor" of Nantong. It is a significant source of water for local urban development. Several projects to restore its ecosystem have been implemented since 2016.

Recalling his tour to the area in 1978, Xi hailed the great improvement in the environment during these years.

"Such a happy life is built by your own hands and worked out by everyone together," he said. 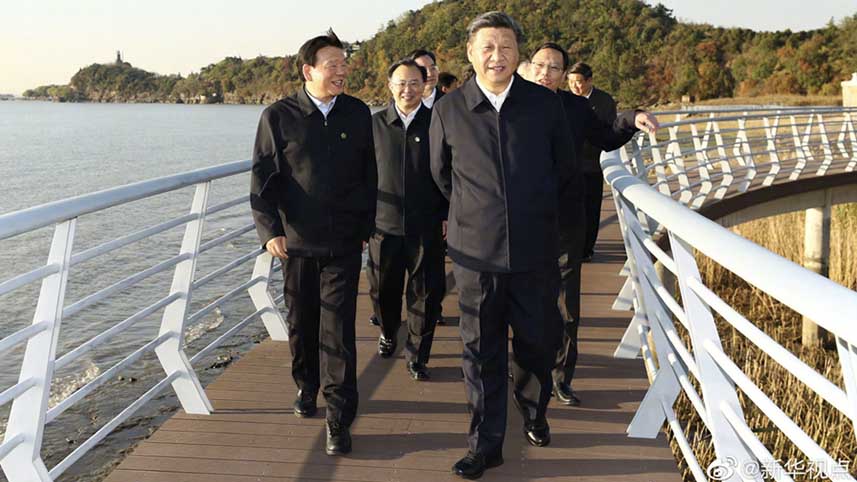 Xi then went to Nantong Museum, where he watched exhibits introducing Zhang Jian, a Chinese industrialist and educator in the late 19th century and early 20th century.

The museum, founded by Zhang in 1905, is the first public museum founded by Chinese.

Hailing Zhang as the sage and model of Chinese private entrepreneurs, Xi said that the museum should be built into a patriotic education base to inspire more people, especially young people. 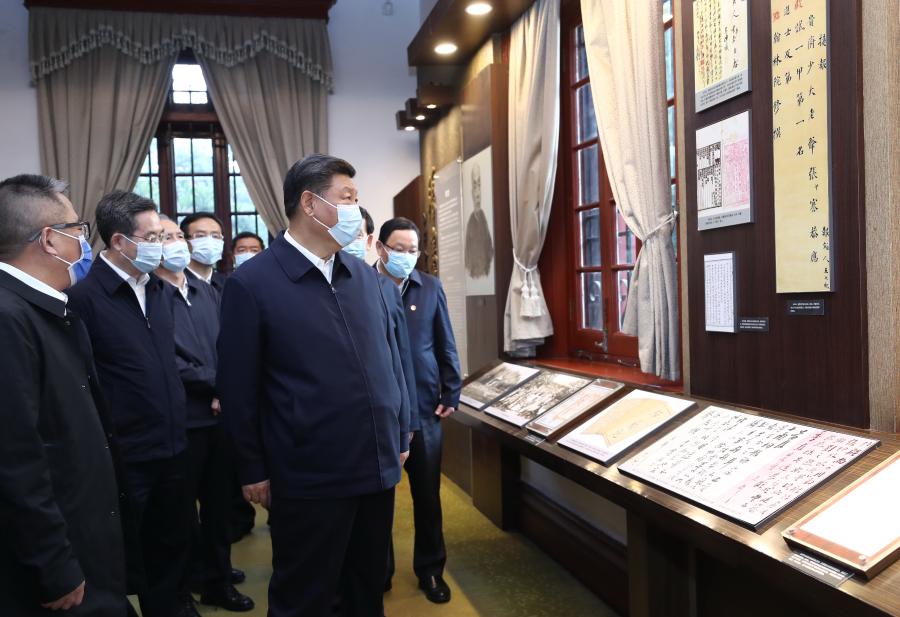 On Friday, Xi inspected Yangzhou City – the second stop of his tour in Jiangsu. Xi visited an ecological cultural park and the Jiangdu water conservancy project to learn about local efforts in environmental improvement as well as cultural protection and inheritance.

While visiting an ecological and cultural park in the Sanwan area, Xi learned about environmental remediation along the Grand Canal, as well as the protection, inheritance and use of its culture. He urged local authorities to integrate cultural and tourist activities along with the remediation. That, he said, would help shape the area's development and thus, better the livelihoods for local residents. 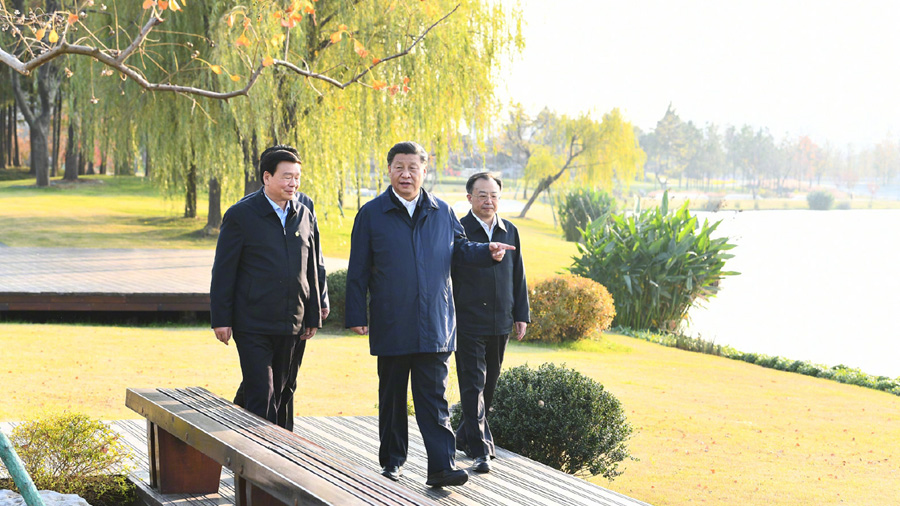 In Jiangdu, he learned about the operations of the country's south-to-north water diversion project as the district stands as the origin of the east route of this mega project.

China's densely-populated northern region has long suffered from acute water shortages, leading to groundwater overexploitation and river water diminishing. To optimize the allocation of water resources and quench the thirsty north, south-to-north water diversion projects, which began in 2002, have been built to channel water from the water-rich Yangtze River basins through eastern, middle and western routes to the dry areas in the north.

"China's water resources are richer in the south than in the north, so it must be adjusted scientifically," Xi told local officials during his visit. "However, people in the north shouldn't take it for granted just because we have this measure in place."

"We need to plan urban development according to the amount of water resources. Therefore, we should integrate the south-to-north water diversion project and on-site water conservation and work on them both," he continued.

According to official data, the eastern route and middle route have altogether diverted 29.4 billion cubic meters of water to arid areas in the north, benefiting more than 120 million people as of 2019, which turned into an industrial and agricultural boost for cities totaling almost 100 billion yuan per year. 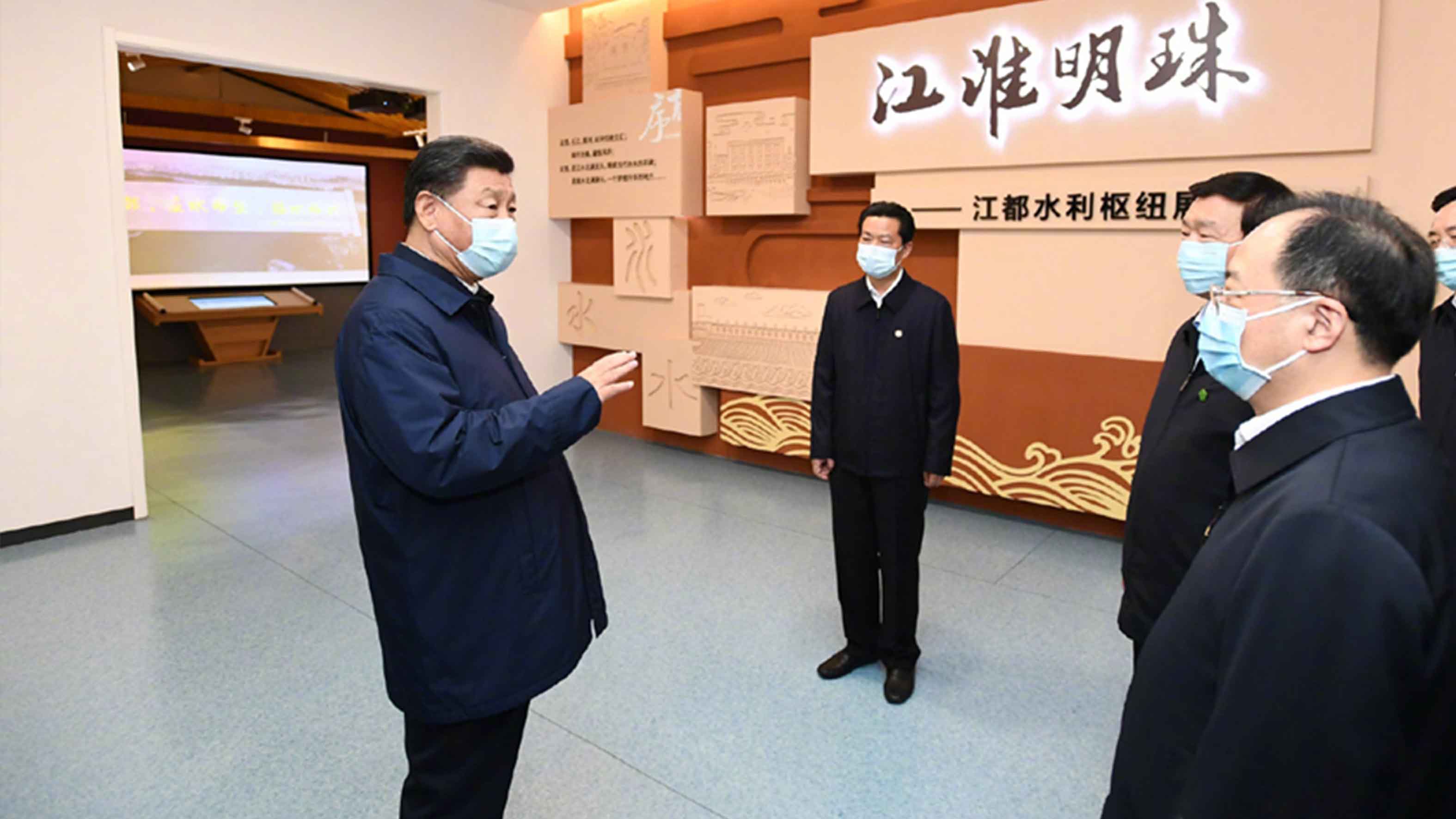 The Yangtze River Economic Belt consists of nine provinces – Sichuan, Guizhou, Yunnan, Hubei, Hunan, Jiangxi, Anhui, Jiangsu, and Zhejiang – and two municipalities – Chongqing and Shanghai. It covers roughly one-fifth of China's land and has a population of 600 million, generating more than 40 percent of the country's GDP.

In 2016, China released a development plan of the economic belt that emphasized the priority of ecological conservation and green development. 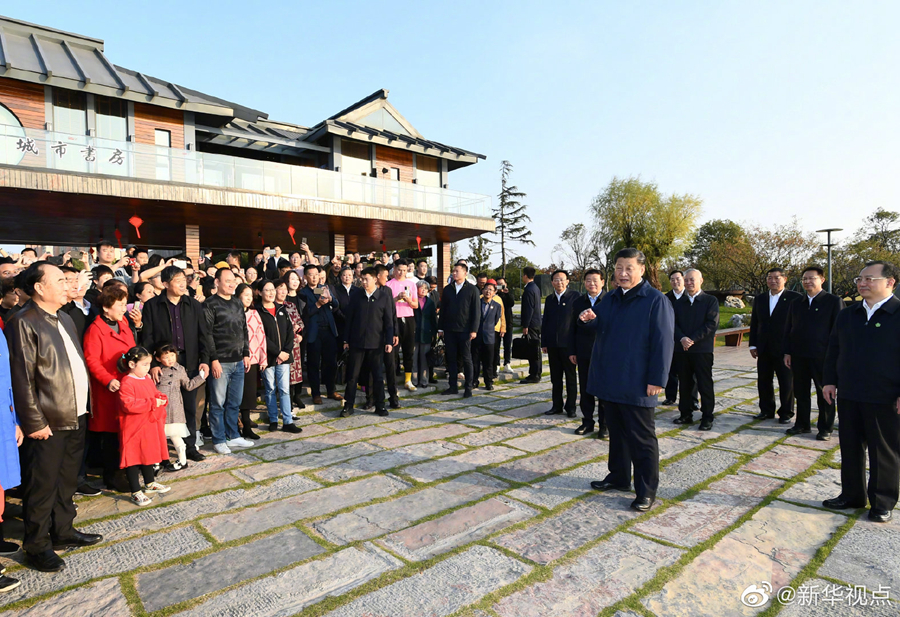 When addressing the opening ceremony of the first China International Import Expo in Shanghai in November 2018, Xi announced that the country would support the integrated development of the Yangtze River Delta region. An outline of the strategy was issued by the CPC Central Committee and the State Council the following year.

The outline, mapping development for a 358,000-square kilometers expanse that encompasses Jiangsu, Zhejiang and Anhui provinces and Shanghai Municipality, said the Yangtze River Delta boasts strategic significance in the country's modernization and further opening-up, which makes its regional integration crucial for leading the country's high-quality development and building a modern economic system.

Included in both strategies, Shanghai and Jiangsu are among the most developed regions in China. Shanghai tops the GDP ranking of Chinese cities, and Jiangsu has the second-highest GDP among Chinese provinces. They are not only at the forefront of the coordinated development along the Yangtze River but also pioneers that explore China's future in a changing world.