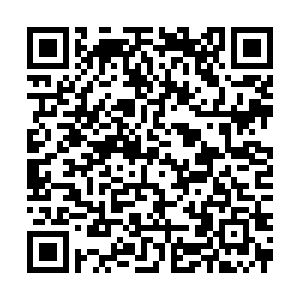 Donald Trump's defense team wrapped up its case against conviction at the former U.S. president's Senate impeachment trial on Friday, denying that their client's words incited riots at the U.S. Capitol on January 6 and going so far as to deny that the violence amounted to an insurrection.

The defense concluded its case in a little over three hours, and senators then questioned Democratic House impeachment managers and Trump's lawyers. If neither side calls witnesses, closing arguments and a verdict could come as soon as Saturday.

Trump was impeached on a charge of "incitement to insurrection" for his alleged role in provoking the Capitol riots on January 6, in which five people died.

Michael van der Veen, a personal injury lawyer and part of the Trump defense team, told senators that the impeachment case was a "politically motivated witch hunt… completely divorced from the facts, the evidence and the interests of the American people" and a "monstrous lie."

Van der Veen argued that given violent demonstrations at the Capitol were pre-planned, Trump could not be held responsible for inciting them. "To claim that the president in any way wished, desired or encouraged lawless or violent behavior is a preposterous and monstrous lie," he said. 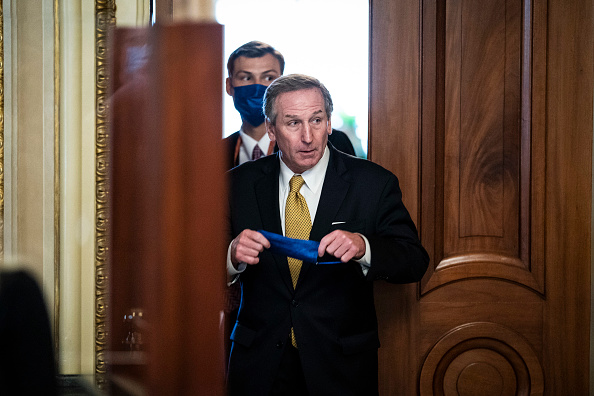 The lawyer insisted that the then president's call for supporters to "fight like hell" was common political rhetoric, before playing a video of Democrats using the word "fight" in speeches and accusing them of making a case against Trump that they themselves were guilty of.

However, the charge against Trump is that his words incited violence, which wasn't the case with the examples van der Veen used.

Meanwhile, Bruce Castor, another defense lawyer, told senators who lived through the breach of the Capitol, "clearly, there was no insurrection."

What did Trump know?

The question-and-answer session was dominated by the timeline of events on January 6 – chiefly what did Trump know about the rioting and when. The defense team refused to disclose information, claiming it was not available because House Democrats did not conduct an investigation.

Republican Trump skeptics Lisa Murkowski and Susan Collins asked, given his slow response to the events, when Trump knew that rioters had entered the Capitol: van der Veen simply said "there's been absolutely no investigation into that." 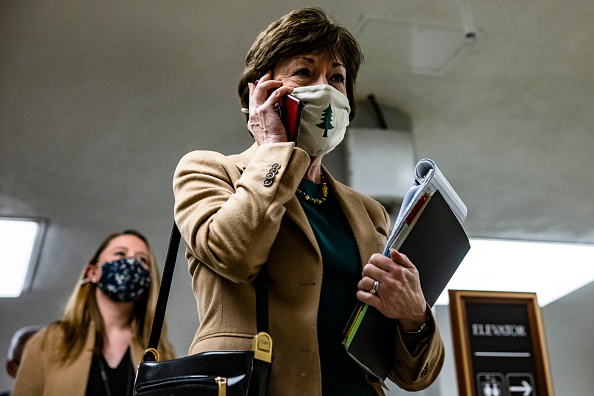 Senator Susan Collins walks through the Senate subway on her way to the fourth day of the Senate's second impeachment trial of former President Donald Trump at the U.S. Capitol in Washington, D.C., February 12, 2021. /Getty

Senator Susan Collins walks through the Senate subway on her way to the fourth day of the Senate's second impeachment trial of former President Donald Trump at the U.S. Capitol in Washington, D.C., February 12, 2021. /Getty

Collins and Mitt Romney, the former Republican presidential candidate, queried when Trump was aware that then Vice President Mike Pence had been evacuated. Trump tweeted criticism of Pence during the violence, when his vice president was still in potential danger.

Castor insisted, "at no point was the president informed the vice president was in any danger." But a Trump ally, Senator Tommy Tuberville, earlier told reporters that he informed the former president during the mayhem that Pence had been evacuated.

Jamie Raskin, the lead impeachment manager, told the defense team that "evidence is in the sole possession of their client." But Trump has refused to testify and other witnesses are not expected to be called, so clearing up questions over the then president's actions as the violence unfolded are unlikely to be resolved.

Defense gets in order

The defense team was pilloried after its first outing on Tuesday – reportedly including by a furious Trump – but on Friday even skeptics of the former president conceded that his lawyers had stepped up their game, even if the Q&A session didn't feature many straight answers.

"There was a better attempt at the second time," Republican Senator Lisa Murkowski told reporters. "But yeah, I didn't really feel it was responsive to our question." 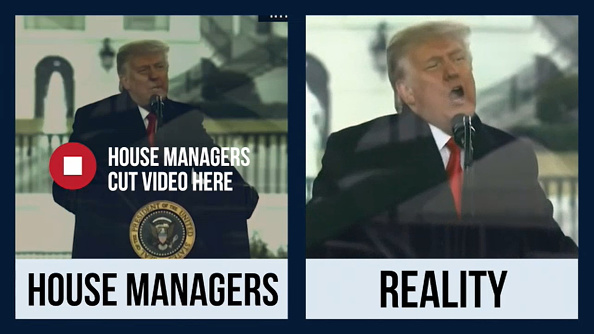 Video evidence is presented by former President Donald Trump's defense team on the fourth day of Trump's second impeachment trial at the U.S. Capitol on February 12, 2021 in Washington, D.C. /Getty

Video evidence is presented by former President Donald Trump's defense team on the fourth day of Trump's second impeachment trial at the U.S. Capitol on February 12, 2021 in Washington, D.C. /Getty

Trump's lawyers accused Democrats of taking the president's words out of context in video clips and of hypocrisy. Aping the prosecution, the defense turned to video montages to make their case. Clips featured Democrats praising the Black Lives Matter protests in 2020 interspersed with scenes of violence, as well as Democratic representatives questioning the results of past elections.

They also played clips of Trump speeches, showing him attacking Republicans as well as Democrats in front of large and adoring crowds – a possible reminder to senators that the former president still remains hugely popular with the base of the party.

Both sides will have the opportunity to hold a simple majority vote on calling witnesses on Saturday, but neither is expected to do so.

The House impeachment managers and the defense team will each have up to two hours to present closing arguments, with a vote on whether to convict or acquit Trump possible before the end of the day.

A two-thirds majority of the 100-person Senate is required for conviction, and while all 50 Democrats are expected to vote in favor it's unlikely the 17 Republican votes required will be found.

Five Republicans have consistently backed the constitutionality of the trial – Murkowski, Collins, Romney, Ben Sasse and Pat Toomey – and a sixth, Bill Cassidy, changed his mind to support it on Tuesday. However, Cassidy was seen holding a draft statement of acquittal on Friday.

With Trump still holding sway over the party, eyes are on retiring senators such as Richard Burr and Rob Portman for other votes to convict.

Mitch McConnell, the Republican leader in the Senate, would also probably have to side with the Democrats for a conviction to take place, but doing so would only inflame divisions within his party.