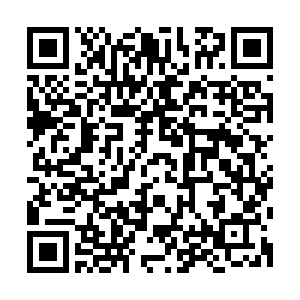 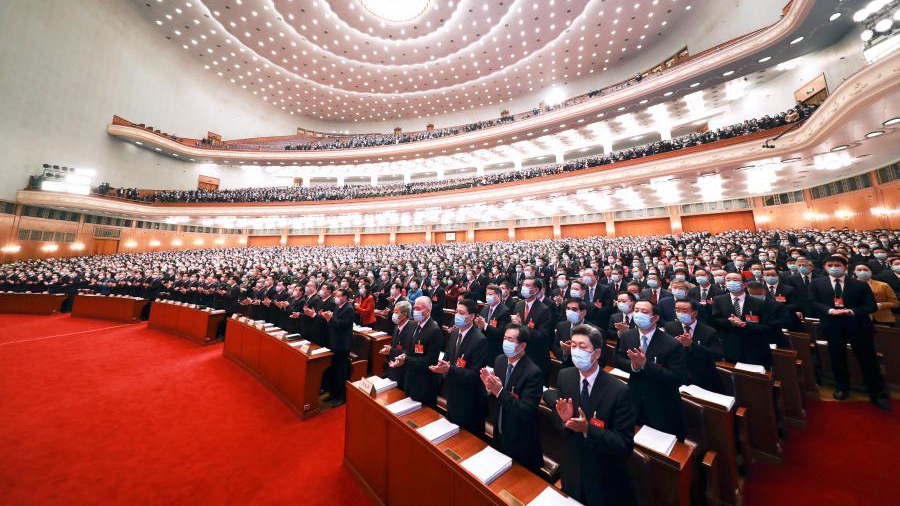 China has set a gross domestic product (GDP) growth target of over six percent for 2021 and outlined a plan to promote innovation, green development, and common prosperity in the next five years.

Addressing the country's annual legislative session, Premier Li Keqiang on Friday explained how China is going to tackle the numerous challenges it faces in a new development stage.

"China remains in an important period of strategic opportunity for development. Yet, there are changes in both the opportunities and challenges we face," Li said when delivering a government work report at the opening meeting of the fourth session of the 13th National People's Congress (NPC), China's top legislature. 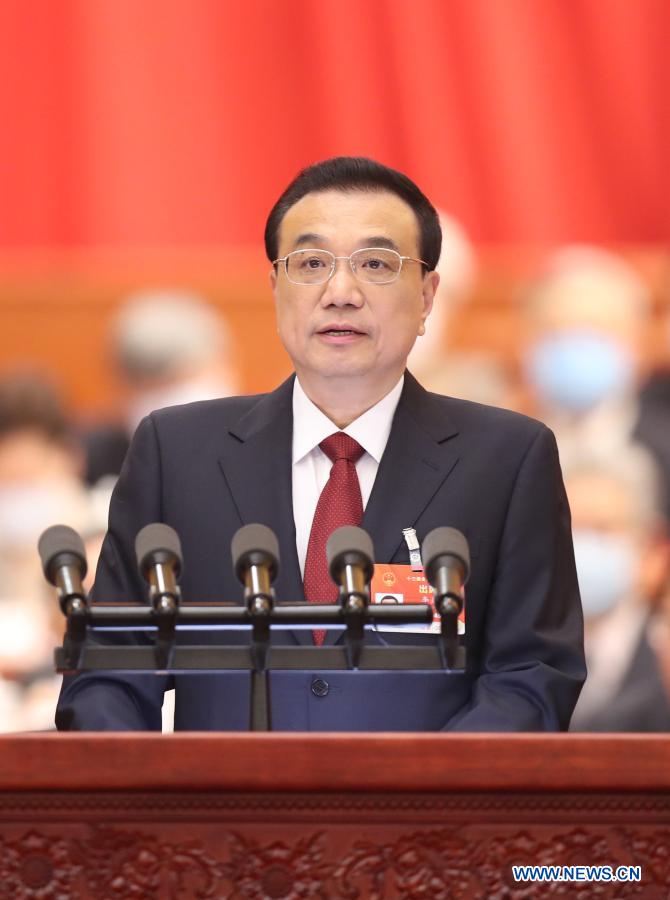 Chinese Premier Li Keqiang delivers a government work report at the opening meeting of the fourth session of the 13th National People's Congress at the Great Hall of the People in Beijing, March 5, 2021. /Xinhua

Chinese Premier Li Keqiang delivers a government work report at the opening meeting of the fourth session of the 13th National People's Congress at the Great Hall of the People in Beijing, March 5, 2021. /Xinhua

Describing 2020 as "an extraordinary year in the history of the People's Republic of China," the premier underscored China's "major strategic success" in fighting COVID-19 and the fact that it was the only major economy to achieve positive growth.

"We attained a complete victory in the fight against poverty, and we scored decisive achievements in securing a full victory in building a moderately prosperous society in all respects," Li said.

– A reduction of burden on market entities by over 2.6 trillion yuan ($402 billion);

– Lifting the remaining 5.51 million poor rural residents out of poverty. 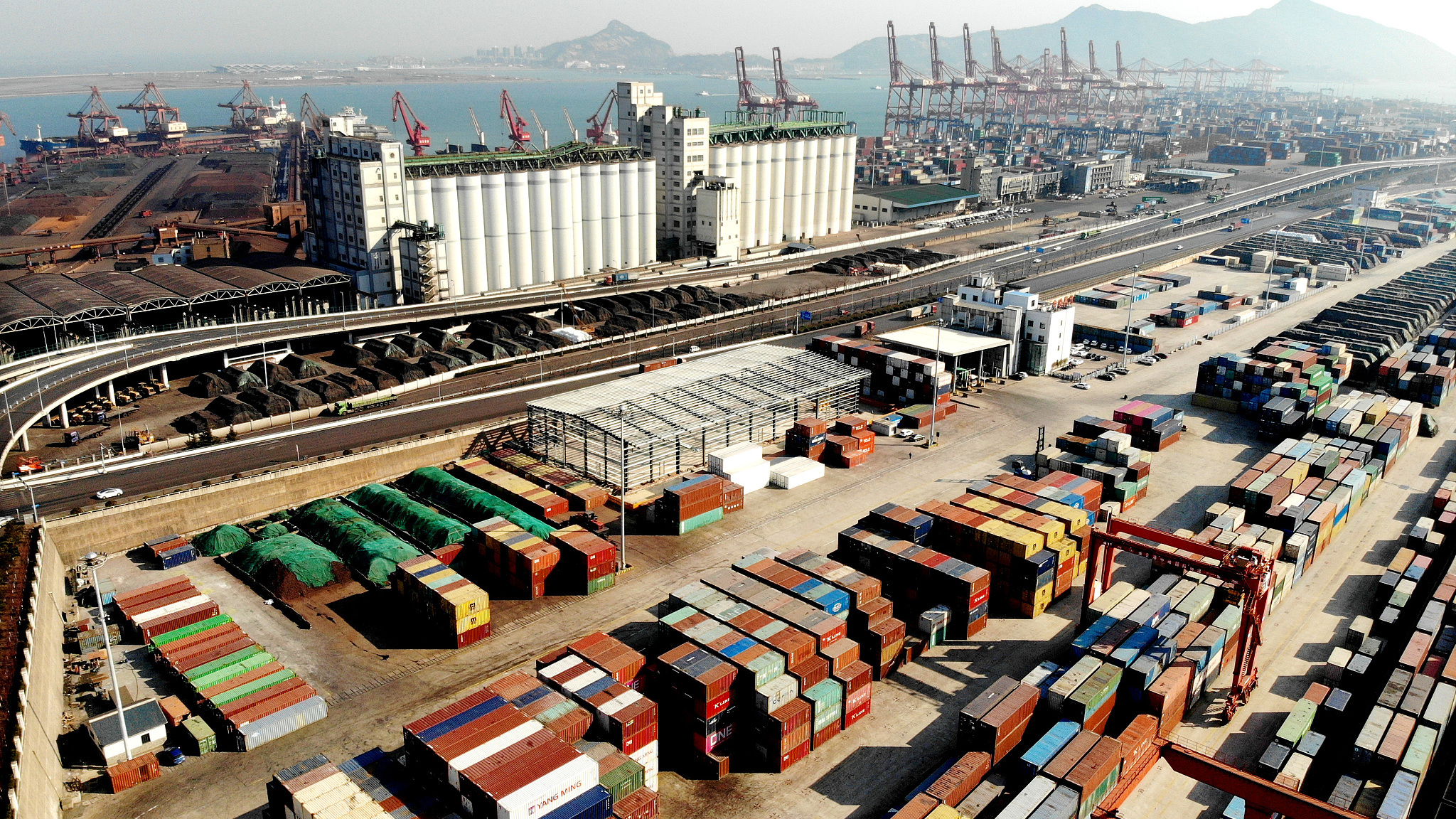 China has made "historic new achievements" in economic and social development in the 13th Five-Year Plan (FYP) period (2016-2020), Li said in his report.

The 14th FYP period (2021-2025) will be the first five years when China embarks on a new journey to build a modern socialist country in all respects, he stressed, before outlining the draft Outline for the 14th Five-Year Plan for Economic and Social Development and Long-Range Objectives through the Year 2035.

– An annual increase of R&D spending by more than seven percent;

– A raise of the average life expectancy by one year;

What inspires China to go green? 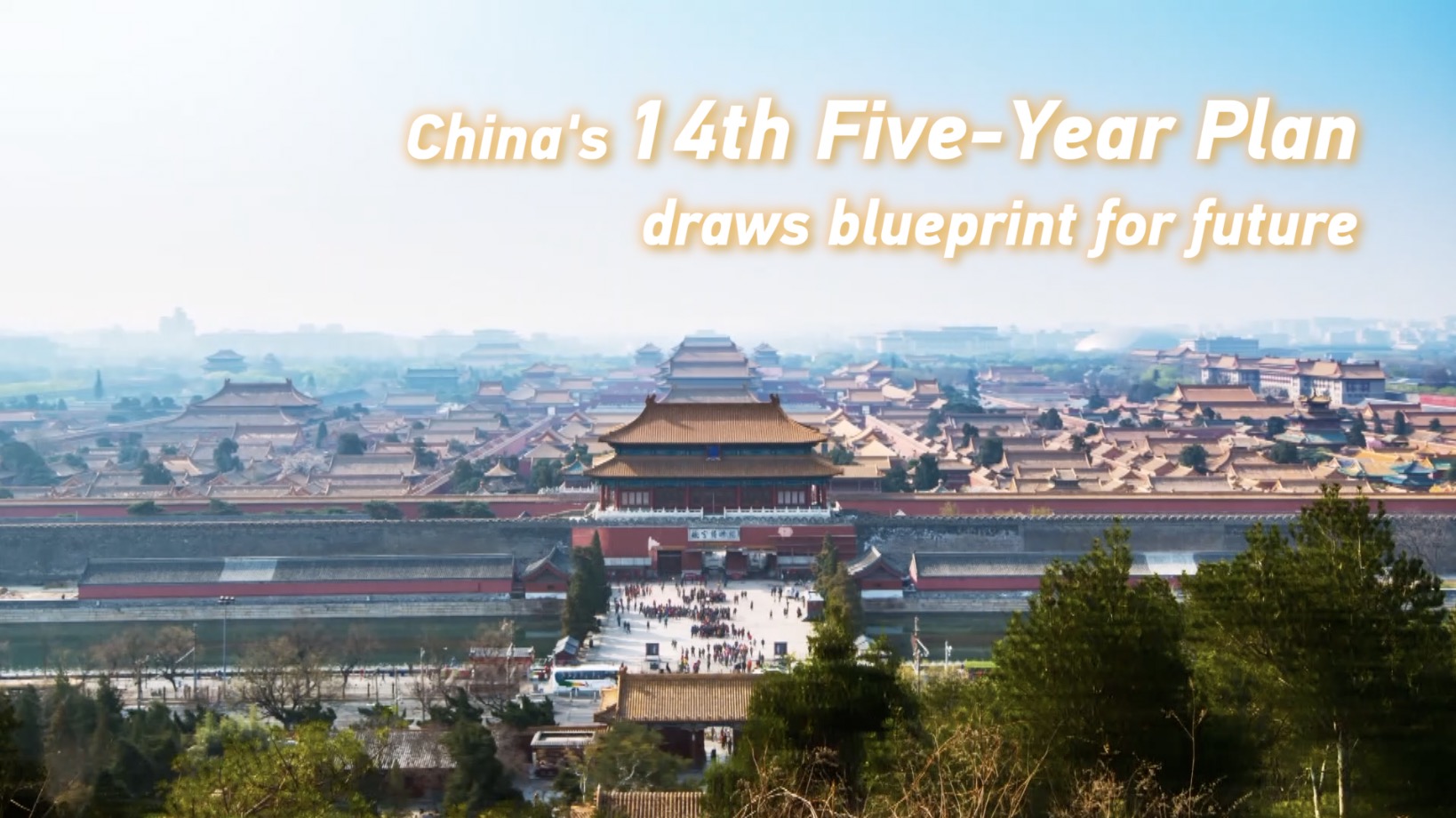 These targets are set to improve the quality of economic growth, pursue innovation-driven development, create a robust domestic market, promote green development and improve people's well-being, according to the premier.

"Innovation remains at the heart of China's modernization drive," he said. The country will strive to make major breakthroughs in core technologies in key fields and formulate and implement a ten-year action plan for basic research, he added.

In order to foster a new development pattern, China will give priority to domestic circulation and work to build a strong domestic market and turn the country into a "trader of quality," he said.

"We will leverage the flow of the domestic economy to make China a major magnet for global production factors and resources, thereby promoting positive interplay between domestic circulation and international circulation," Li explained.

The Chinese government will take various measures this year to ensure "a good start" for the country in the 14th FYP period, Li said.

Main projected targets for development in 2021:

– GDP growth of over six percent;

– A surveyed urban unemployment rate of around 5.5 percent;

– CPI increase of around three percent;

– Steady increases in both the volume and quality of imports and exports;

– A basic equilibrium in the balance of payments;

– A further improvement in the environment;

– A drop of around three percent in energy consumption per unit of GDP;

– A continued reduction in the discharge of major pollutants; 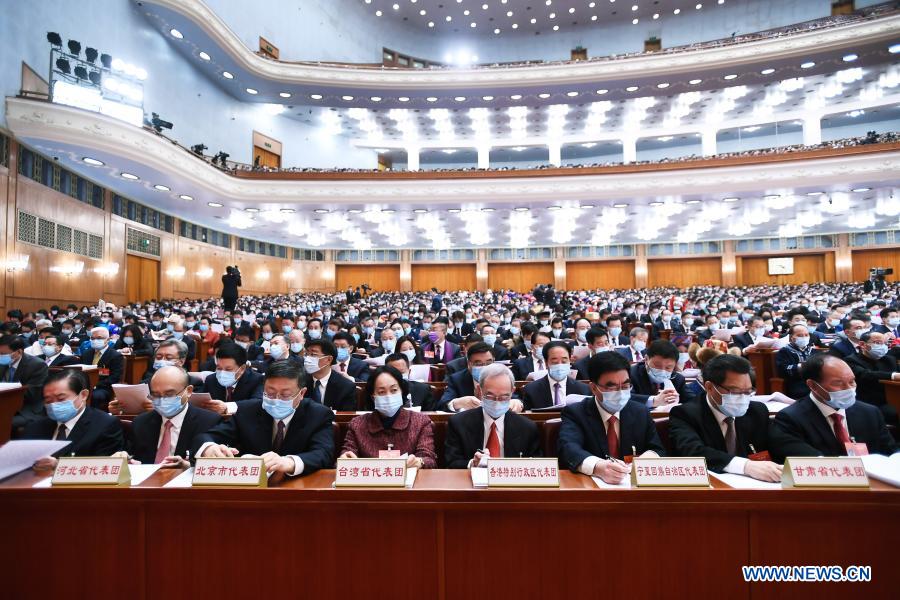 China did not set a specific GDP growth target in 2020 amid uncertainty regarding the pandemic, but Premier Li announced a growth target of over six percent this year.

"A target of over six percent will enable all of us to devote full energy to promoting reform, innovation, and high-quality development," Li said.

The government will continue to implement and improve tax reduction policies, he said, announcing that the value-added tax (VAT) threshold for small-scale taxpayers will be raised from 100,000 yuan ($15,450) to 150,000 yuan ($23,175) in monthly sales.

"We will keep our prudent monetary policy flexible and targeted and at a reasonable and appropriate level," he said.

China's annual defense budget will maintain single-digit growth for a sixth consecutive year by increasing 6.8 percent in 2021, according to a draft budget report.

This year's planned defense spending will be about 1.35 trillion yuan ($209 billion), read the draft submitted to the fourth session of the 13th NPC for deliberation.

China's defense budget is about one-quarter of the U.S. figure, which is 740.5 billion U.S. dollars for the 2021 fiscal year.

China lodges solemn representations with U.S. for its report on Chinese military

"We will improve the relevant systems and mechanisms of the two special administrative regions for enforcing the Constitution and the basic laws," he said. "We will ensure the implementation of the laws and enforcement mechanisms for the two regions to safeguard national security." 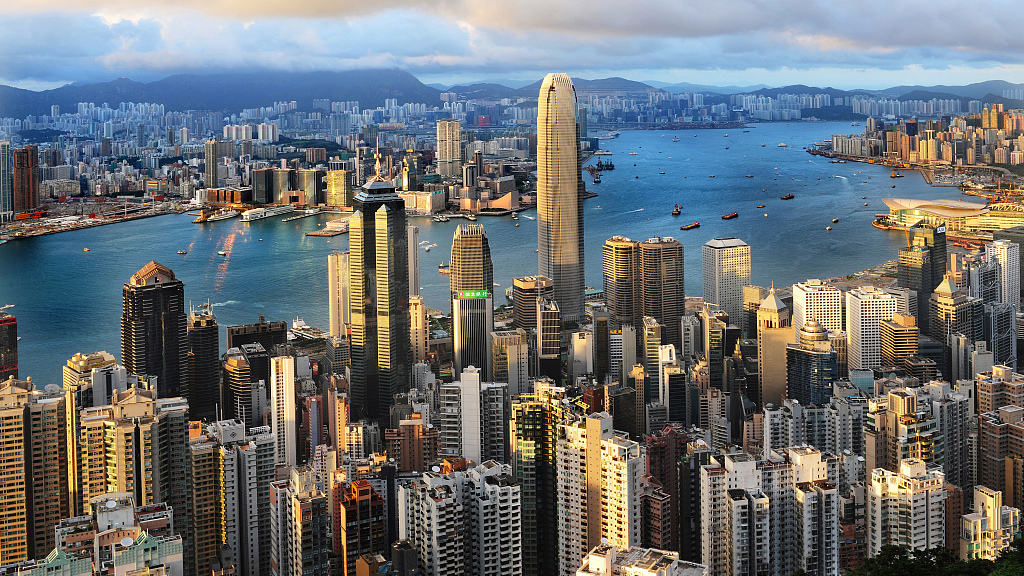 A draft decision on improving the electoral system of the Hong Kong Special Administrative Region (HKSAR) was submitted on Friday to the legislative session for deliberation.

In an explanatory speech on the draft, Wang Chen, vice chairman of the NPC Standing Committee, said the electoral system of the HKSAR should conform to "One Country, Two Systems," meet the realities in the HKSAR, and serve to ensure "patriots administering Hong Kong."

Patriots governing Hong Kong: What's the standard of being a patriot?

Commenting on the Taiwan question, Li reiterated commitment to the one-China principle and opposition to any separatist activity seeking "Taiwan Independence."

"We remain committed to the major principles and policies on work related to Taiwan, to the one-China principle and the 1992 Consensus, and to promoting the peaceful growth of relations across the Taiwan Straits and China's reunification," he said.

Despite the remarkable achievements in a highly challenging 2020, China still faces many challenges in the years to come, Li admitted.

"As COVID-19 continues to spread around the world, instability and uncertainty are mounting on the international landscape, and the global economy continues to face grave challenges," he underscored the unfavorable external environment.

"Domestically, there are still weak links in our work to control COVID-19," he continued, adding that the foundation for achieving economic recovery needs to be further consolidated.

As China strives to upgrade its economy, Li stressed that the country needs to improve its innovation capacity in key areas.

The premier also highlighted some local governments' "serious budgetary deficits" as well as the "formidable tasks" to forestall and defuse risks in the financial sector and other areas.

Addressing these challenges in its draft development plan, China is embarking on its new journey in a targeted approach.