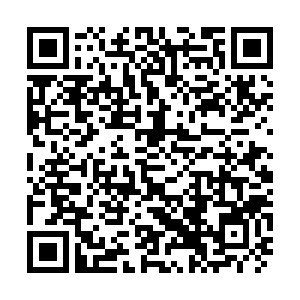 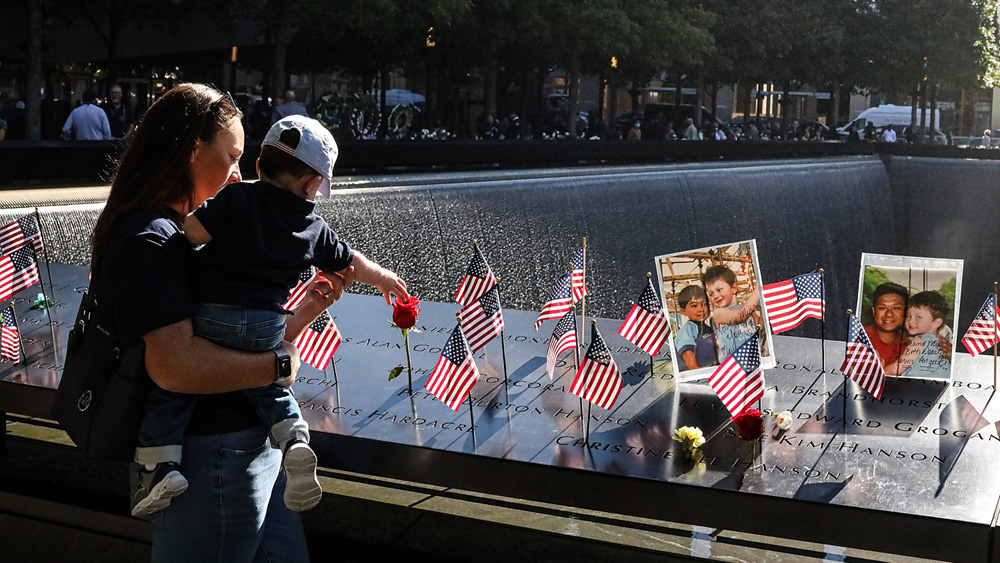 U.S. President Joe Biden commemorated the 20th anniversary of the September 11 attacks on the United States on Saturday with visits to each of the sites where hijacked planes crashed in 2001, honoring the victims of the devastating assault.

In the first of his wordless tributes, Biden stood in somber silence with former presidents Barack Obama and Bill Clinton at the New York City site where planes brought down the World Trade Center's twin towers.

The three leaders, flanked by Jill Biden, Michelle Obama and Hillary Clinton, shared a moment of silence with the crowd at 8:46 a.m. EDT to mark the time that the first plane hit, heads bowed. They listened as relatives read the names of those who died.

The Bidens then flew to Shanksville, Pennsylvania, before heading back to the Washington area to visit the Pentagon memorial.

On September 11, 2001, 19 terrorists hijacked four passenger jetliners, crashing two into the World Trade Center in New York City and another into the Pentagon in Virginia. A fourth plane crashed in a field in southern Pennsylvania. Terrorist group al-Qaeda claimed responsibility for the attacks, which killed nearly 3,000 people.

20 years after 9/11, what are the global counter-terrorism trends? 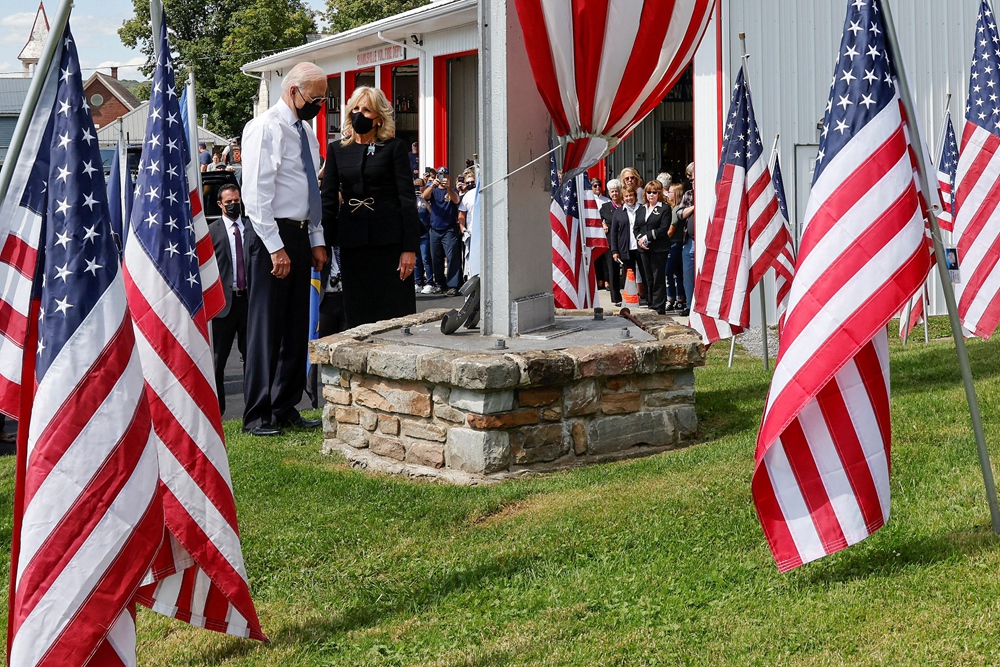 U.S. President Joe Biden pays his respects at a 9/11 memorial outside the Shanksville volunteer fire station on the 20th anniversary of the 9/11 attacks in Shanksville, Pennsylvania, U.S., September 11, 2021. /Reuters

U.S. President Joe Biden pays his respects at a 9/11 memorial outside the Shanksville volunteer fire station on the 20th anniversary of the 9/11 attacks in Shanksville, Pennsylvania, U.S., September 11, 2021. /Reuters

The FBI on Saturday released a newly declassified 16-page document related to logistical support provided to two of the Saudi hijackers in the run-up to the attacks, AP reported.

The document describes contacts the hijackers had with Saudi associates in the U.S. but offers no evidence the Saudi government was complicit in the plot, according to the report.

In a video posted on the eve of the anniversary, Biden urged Americans to show unity.

"To me, that's the central lesson of September 11. It's that at our most vulnerable, in the push and pull of all that makes us human, in the battle for the soul of America, unity is our greatest strength," Biden said in a six-minute message from the White House.

He made the remarks amid growing political division in the United States. "We also saw something all too rare: a true sense of national unity," Biden said, noting the heroism that was seen in the days following the attacks 20 years ago. 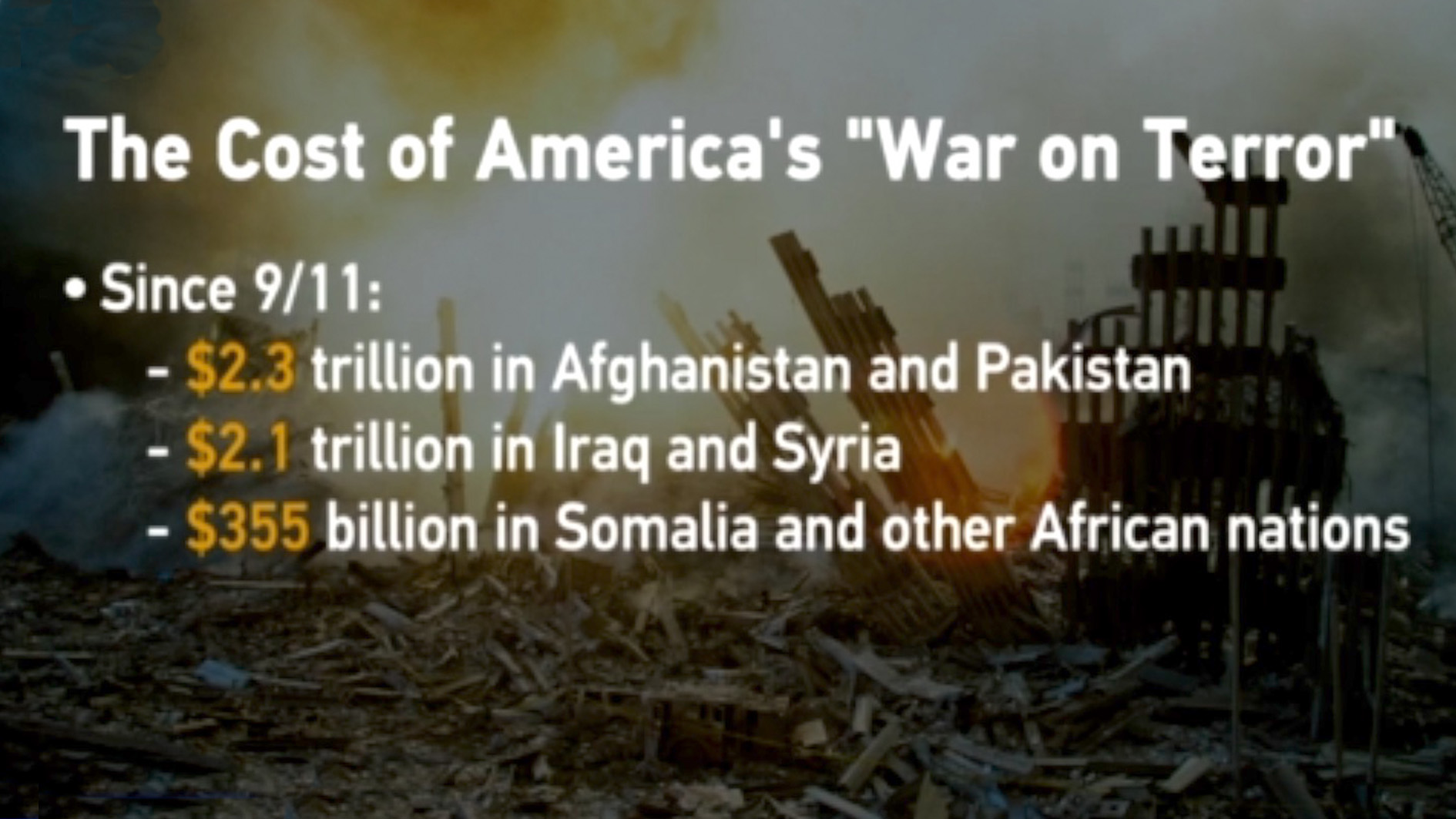 The anniversary comes after a chaotic withdrawal of U.S. troops from Afghanistan, which ended a 20-year war in the country and the longest one in U.S. history.

The war started on September 16, five days after the 9/11 attacks and lasted through four U.S. presidencies, costing the lives of about 2,500 soldiers and 71,000 civilians. It is estimated to have a price tag of more than $2 trillion.

The Taliban, which were overthrown by U.S.-led foreign troops in late 2001, came back to power in Afghanistan last month following a blitz against Western-backed government forces amid the U.S. pullout.

Analysis: Why does Biden insist on the Afghan withdrawal, 20 years after 9/11

9/11 was the start of another round of useless U.S. interventionism

In a speech marking the anniversary at the Flight 93 Memorial in Shanksville, former U.S. President George W. Bush on Saturday warned against domestic extremism, saying the country has seen "growing evidence that the dangers to our country can come not only across borders but from violence that gathers within."

"But in their disdain for pluralism, in their disregard for human life, in their determination to defile national symbols, they are children of the same foul spirit, and it is our continuing duty to confront them," he said. 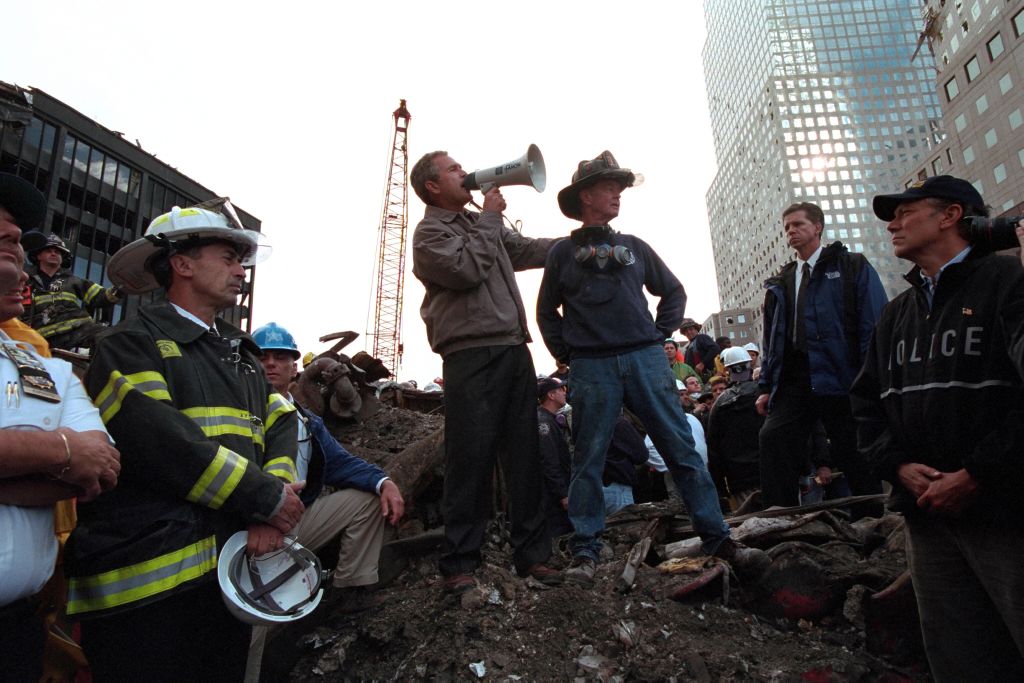 The former Republican president also lamented the division in the U.S., contrasting the current political climate to the spirit of unity that he said he observed in the wake of the 9/11 attacks.

"A malign force seems at work in our common life that turns every disagreement into an argument, and every argument into a clash of cultures. So much of our politics has become a naked appeal to anger, fear and resentment," Bush said. "That leaves us worried about our nation and our future together."

(Cover: A mourner and child view the names of victims on the memorial pools at the National September 11 Memorial & Museum during a commemoration ceremony for the 20th anniversary of the 9/11 attacks in New York, U.S., September 11, 2021. /CFP)