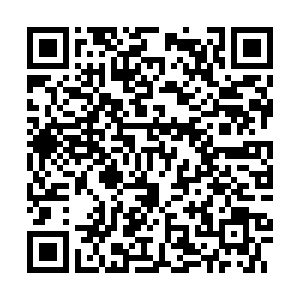 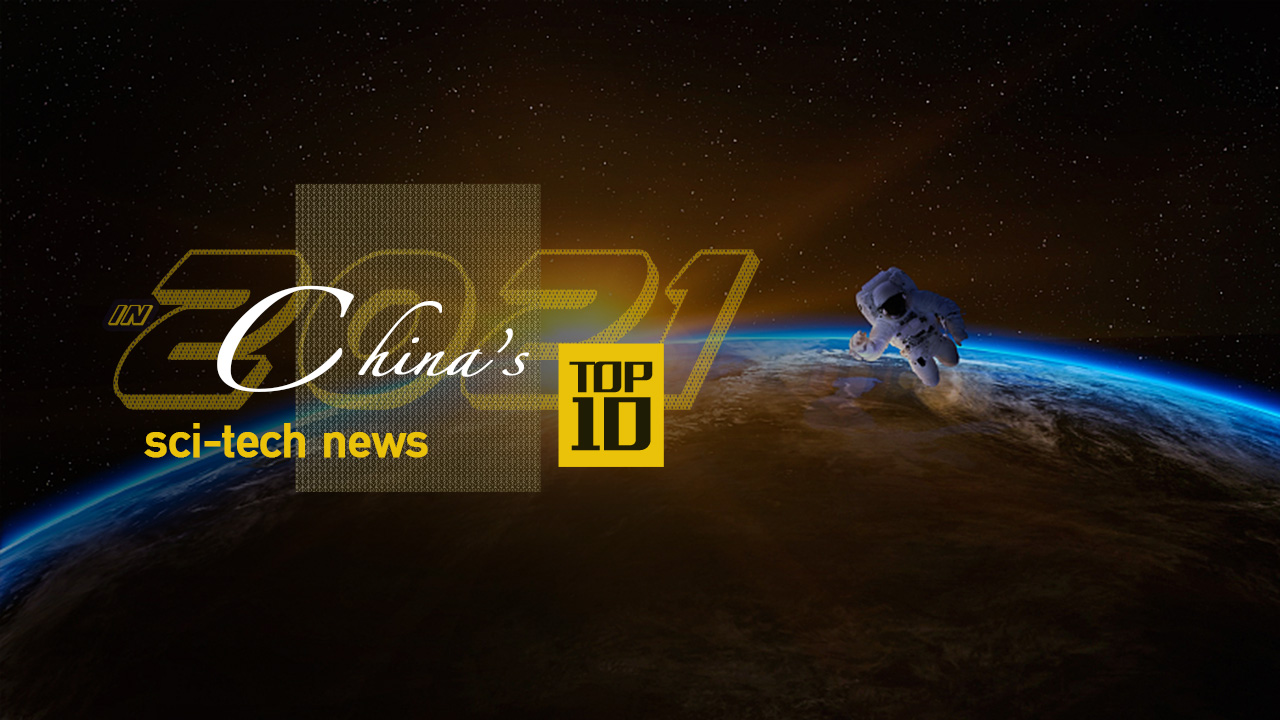 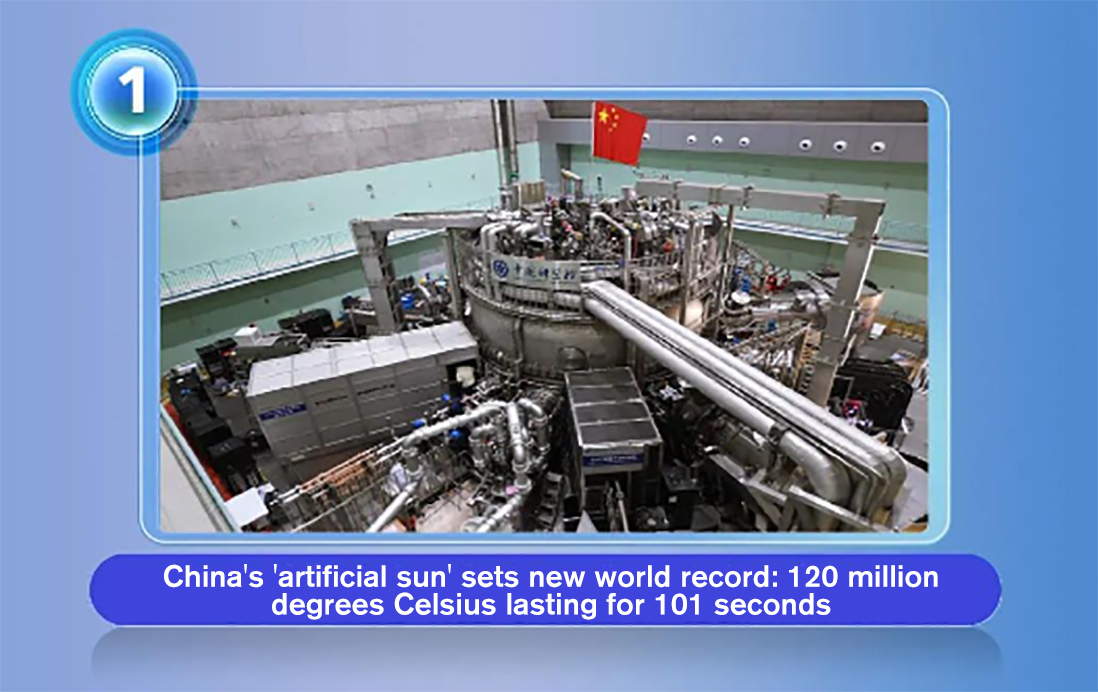 China's "artificial sun" nuclear fusion reactor in Hefei, capital of east China's Anhui Province, has set a new world record after running at the temperature of 120 million degrees Celsius for 101 seconds in May, laying the foundation for the country to build its own nuclear fusion energy station in the future. 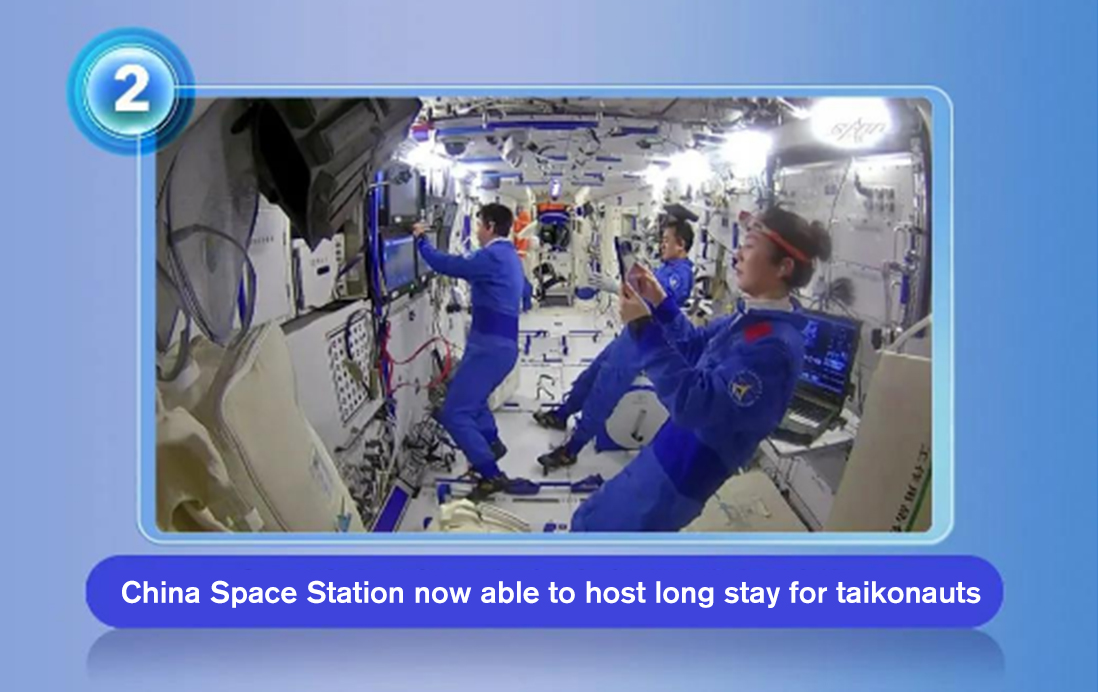 China's unfinished space station has welcomed two batches of taikonauts for months-long stay. The Shenzhou-12 crew, including three taikonauts, entered the space station's core module Tianhe in mid-June and lived there for three months till mid-September. The Shenzhou-13 crew of one female taikonaut and her two male colleagues, arrived at Tianhe in mid-October for a six-month mission. 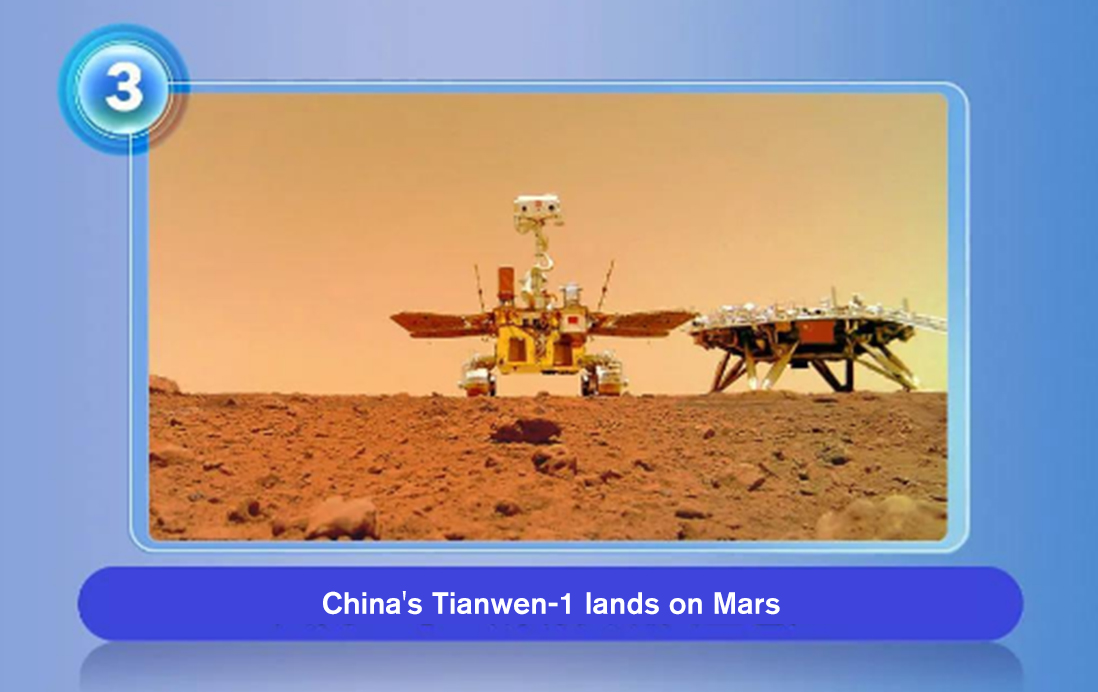 The rover of China's first Mars probe Tianwen-1 touched down on the red planet on May 15. It landed at a pre-selected landing zone in the southern part of an icy area of the planet known as Utopia Planitia.

China launched the Mars probe, which consists of an orbiter, a lander and a rover, on July 23 last year, aiming to complete orbiting, landing and roving in one mission. 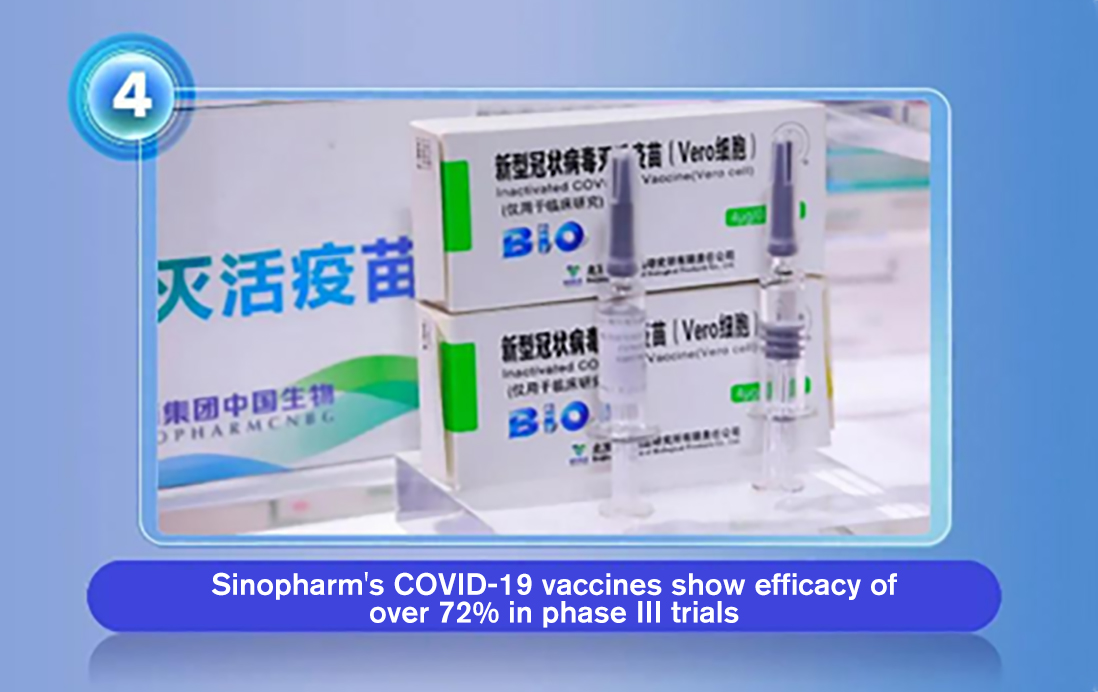 4. Sinopharm's COVID-19 vaccines show efficacy of over 72% in phase-III trials

Two COVID-19 vaccines developed by China's Sinopharm have shown an efficacy of over 72 percent in large-scale phase-3 clinical trials, according to a study published in The Journal of the American Medical Association in May.

It is the world's first published phase-3 study results of inactivated COVID-19 vaccines, according to the company. 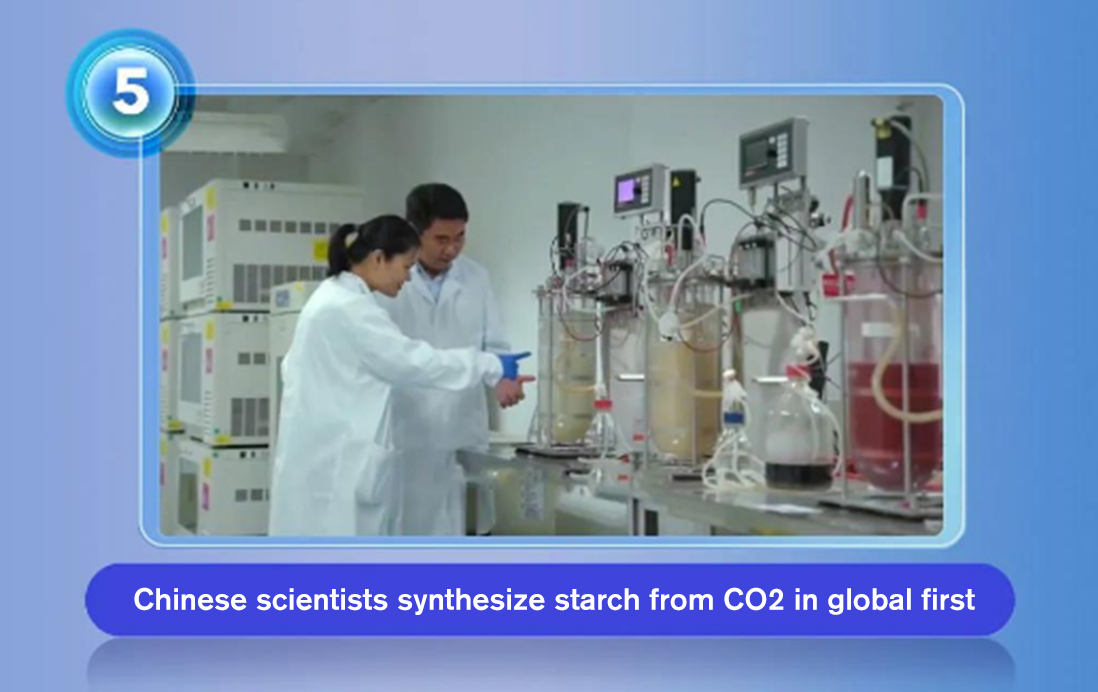 Chinese scientists have become the first in the world to develop an artificial method of synthesizing starch from carbon dioxide (CO2).

The study, published online in the journal Science in September, was conducted by Tianjin Institute of Industrial Biotechnology under the Chinese Academy of Sciences.

The new approach makes it possible to alter starch production from traditional agricultural planting to industrial manufacturing and opens up a new technical route for synthesizing complex molecules from CO2, according to the researchers. 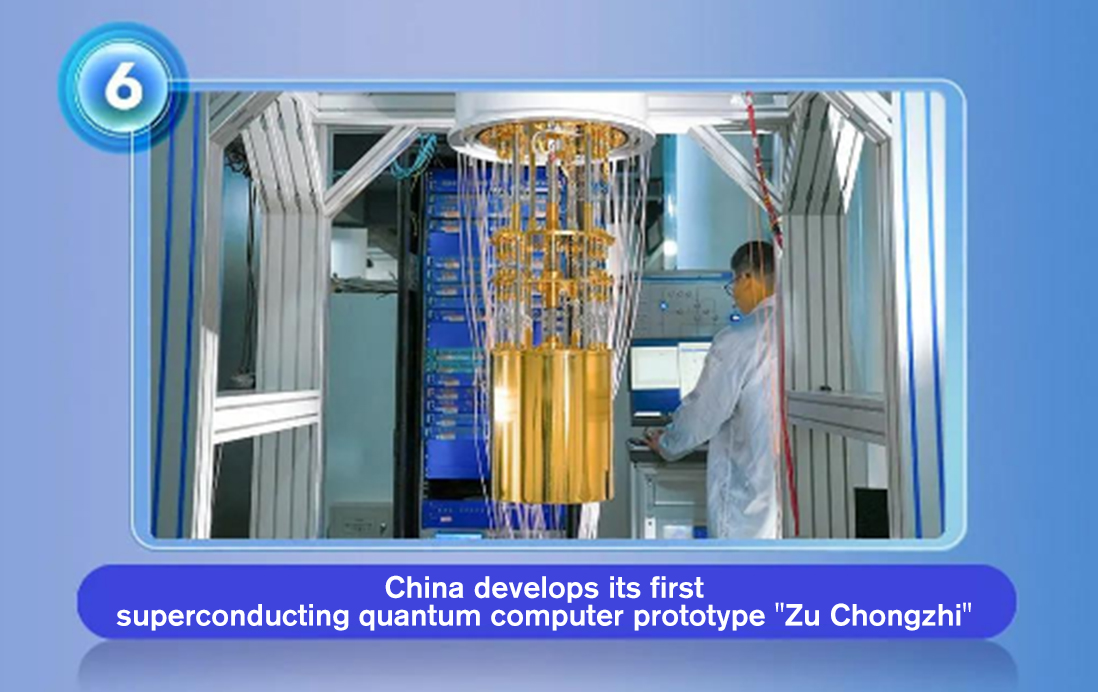 A group of researchers from the University of Science and Technology of China in China in May designed and made the country's first superconducting quantum computer prototype, named "Zu Chongzhi" after the accomplished Chinese mathematician from the fifth century.

The study, led by renowned Chinese quantum physicist Pan Jianwei, was published in the top scientific journal Science in May. 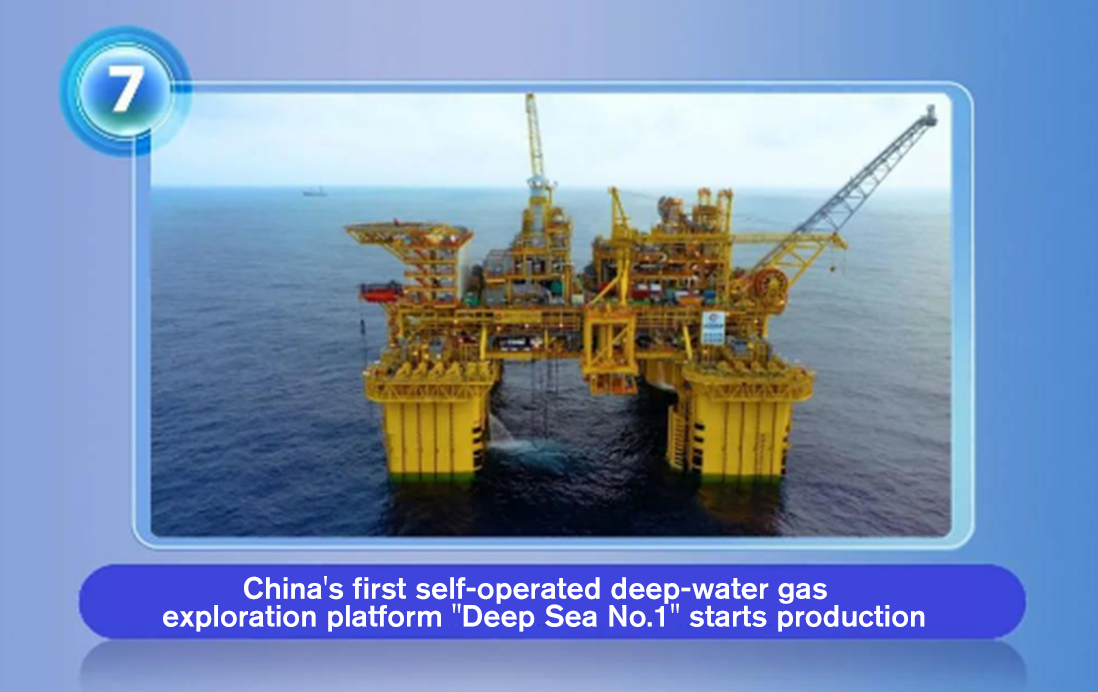 Located in south China's Hainan Province, it is expected to supply 3 billion cubic meters of deep-sea natural gas each year to Guangdong, Hainan and Hong Kong. 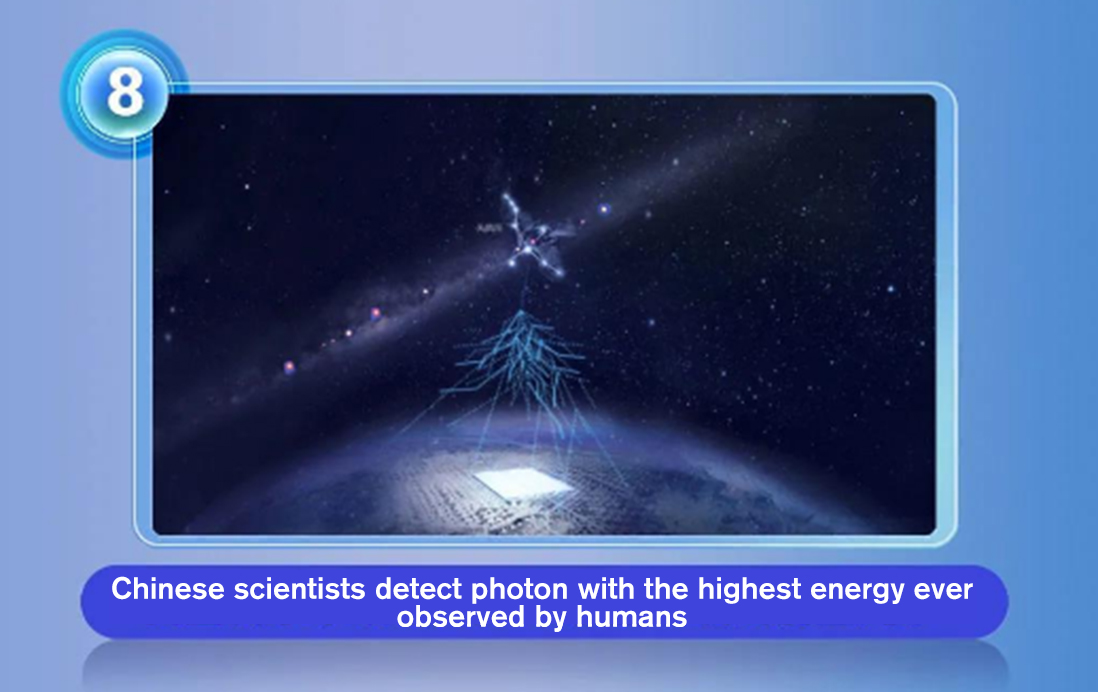 8. Chinese scientists detect photon with the highest energy ever observed by humans

Chinese scientists have detected photons with energies exceeding 1 Peta-electron volt (quadrillion electron-volts or PeV), 100 times more than the record high achieved by any man-made accelerator on Earth. One photon with an energy of 1.4 PeV was detected, the highest value ever observed by humans.

The finding was based on the observations of China's Large High Altitude Air Shower Observatory, one of the country's key national science and technology infrastructure facilities, which is under construction in Daocheng, southwest China's Sichuan Province.

The discovery was published in the journal Nature in May. 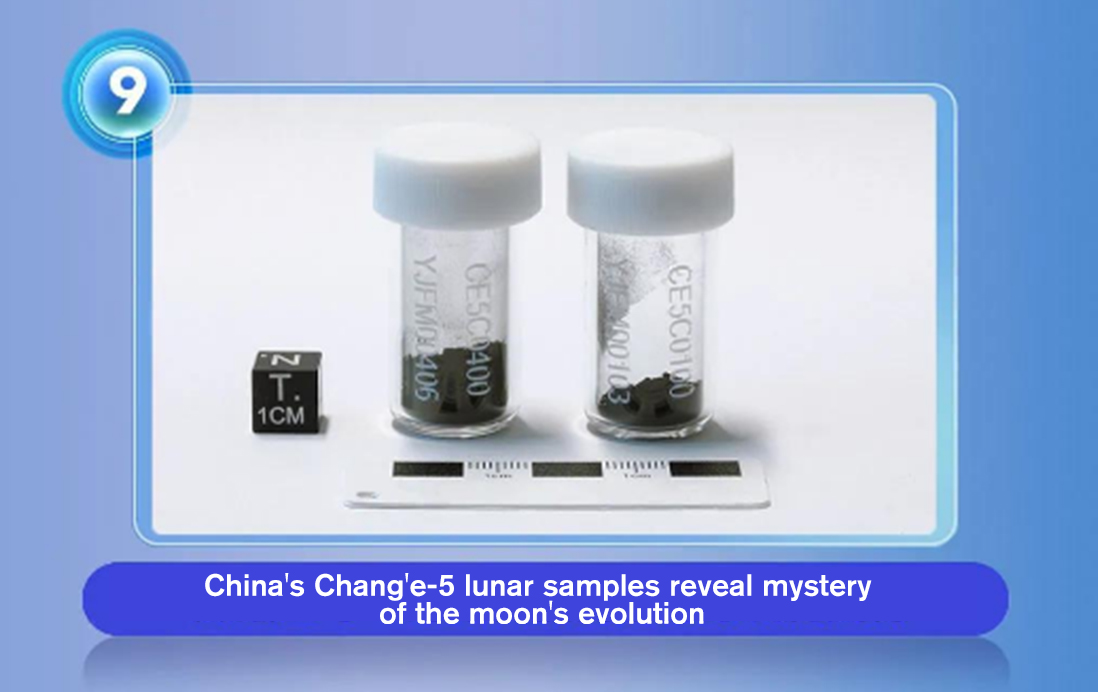 Chinese scientists have discovered that lunar volcanic activities existed about 800 million to 900 million years later than previously thought after analyzing lunar samples collected and brought back by the Chang'e-5 mission, suggesting the moon cooled down much more slowly.

Researchers from the Chinese Academy of Sciences' Institute of Geology and Geophysics presented their results in three papers published in Nature in October. 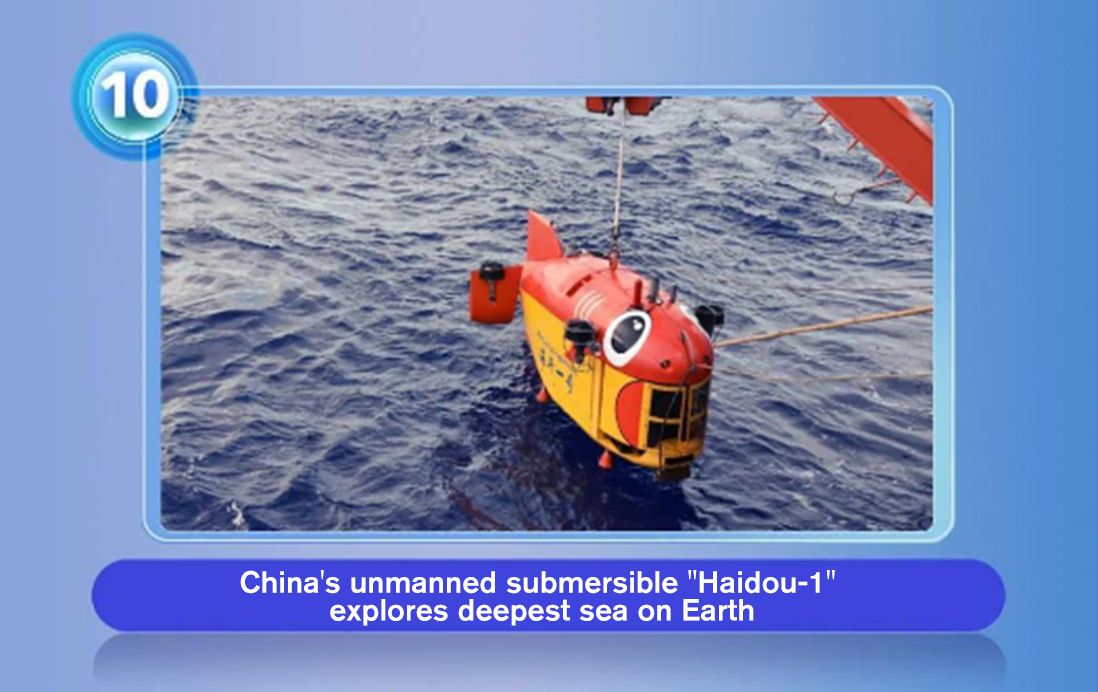 China's self-developed unmanned submersible "Haidou-1" has realized large-scale, full acoustic detection cruise and probe at Challenger Deep in Mariana Trench for the first time with a max diving depth of 10,908 meters and a consecutive working time of over eight hours.