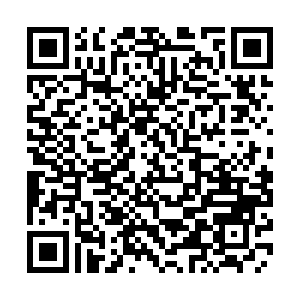 "What happened last night is the biggest and most recent example of what we all know," Sacramento Police Chief Kathy Lester told the media Sunday evening. "Gun violence is truly a crisis in our community, and it has increased not only here in Sacramento but across the nation."

In 2020, the most recent year for which complete data is available, there were 45,222 gun-related deaths in the U.S., according to the Centers for Disease Control and Prevention. Among them, 43 percent (19,384) were murders. 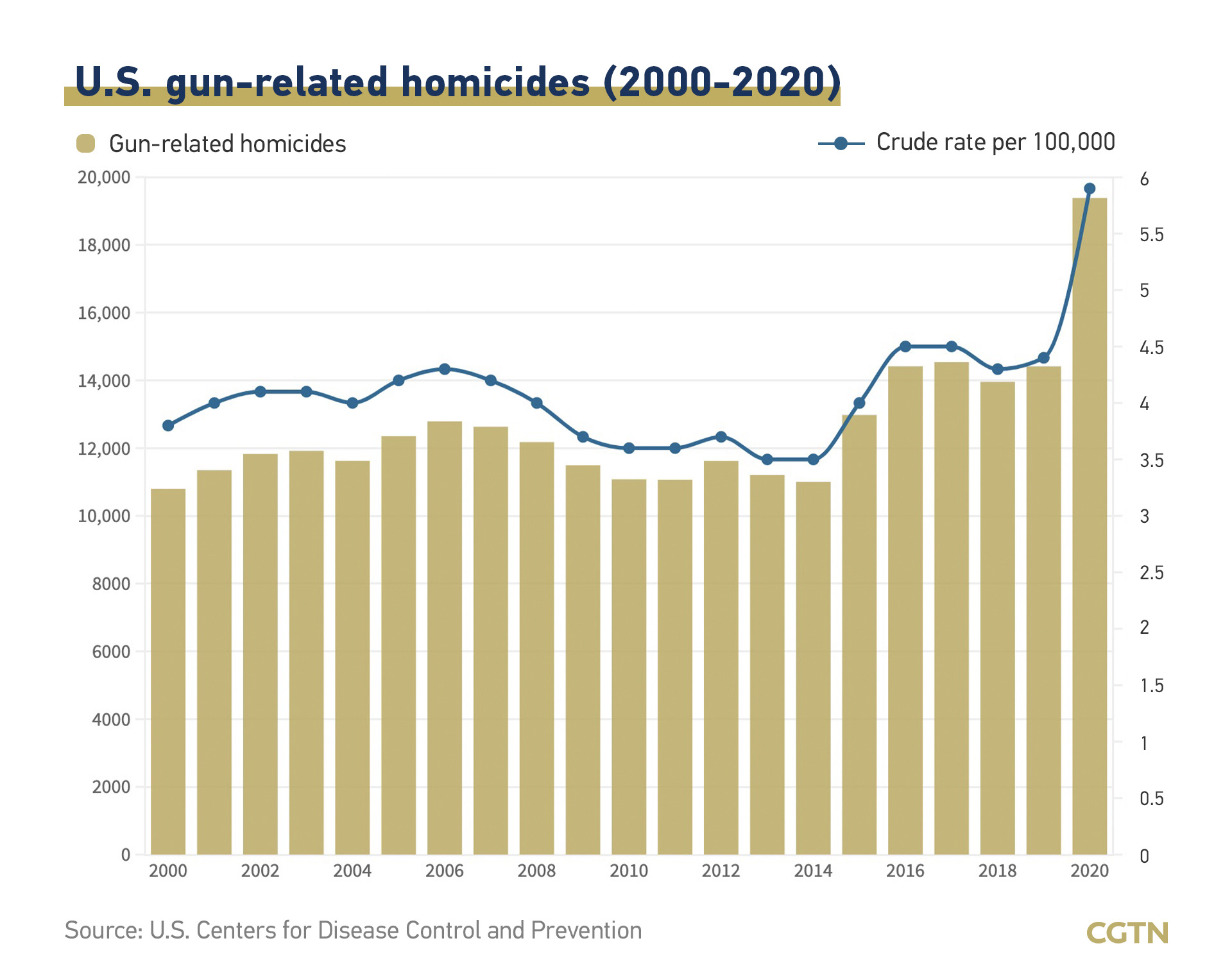 What happened in Sacramento last weekend would fall into the category of "active shooter incidents" by the FBI, defined as "one or more individuals actively engaged in killing or attempting to kill people in a populated area." The FBI data shows an increase between 2000 and 2020. There were 40 such shootings in 2020.

Using the definition from the Gun Violence Archives, which defines a mass shooting as four or more people shot or killed, excluding the shooter, there have been 120 mass shootings in the U.S. since the start of the year. 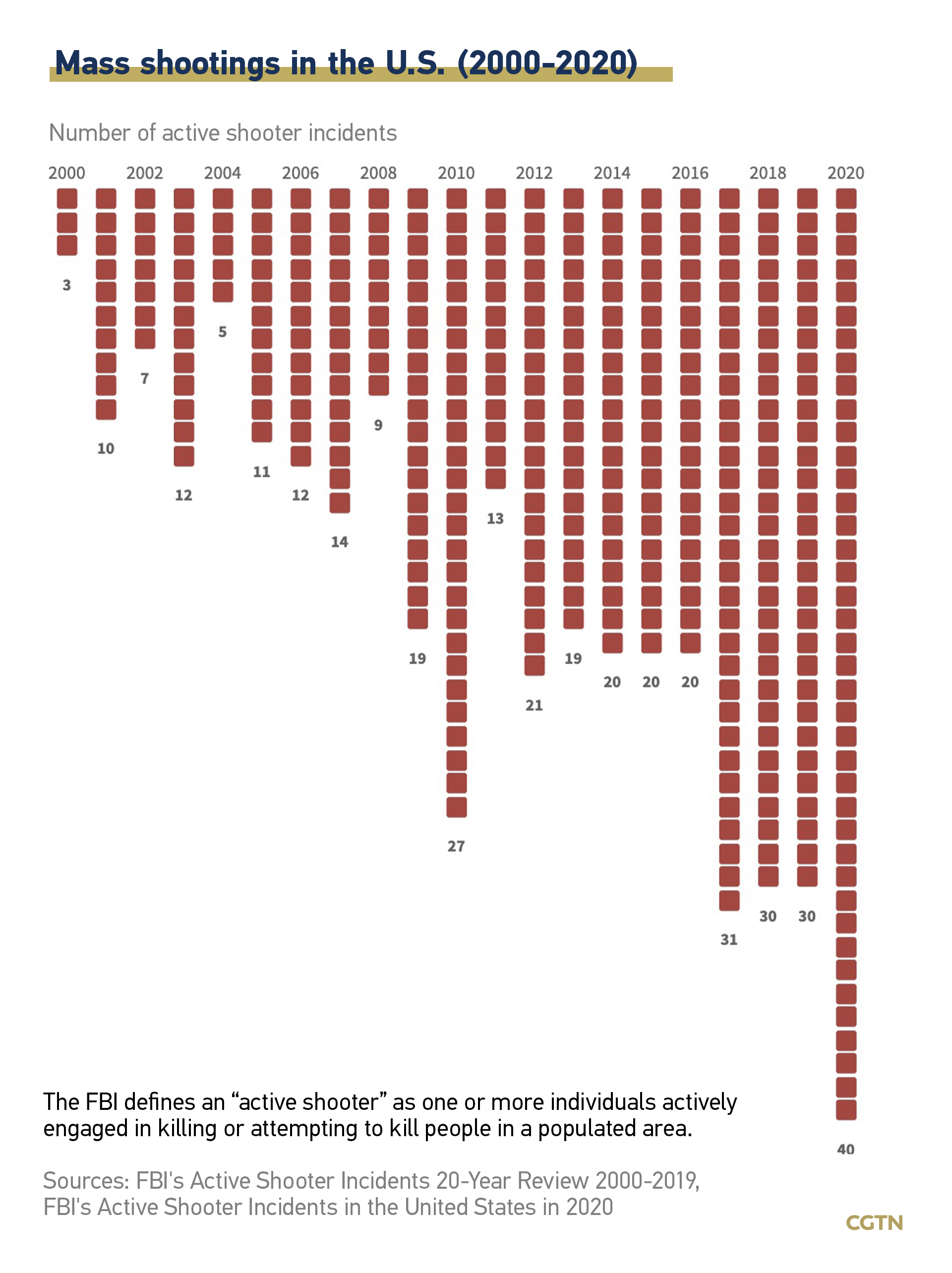 Federal data suggests that gun sales have risen in recent years, particularly during the COVID-19 pandemic. In 2020, the number of federal background checks for gun purchases jumped 40 percent from the year before. The trend has continued in 2021, according to the FBI's National Instant Criminal Background Check System.

Graphics: A run on guns in the U.S. 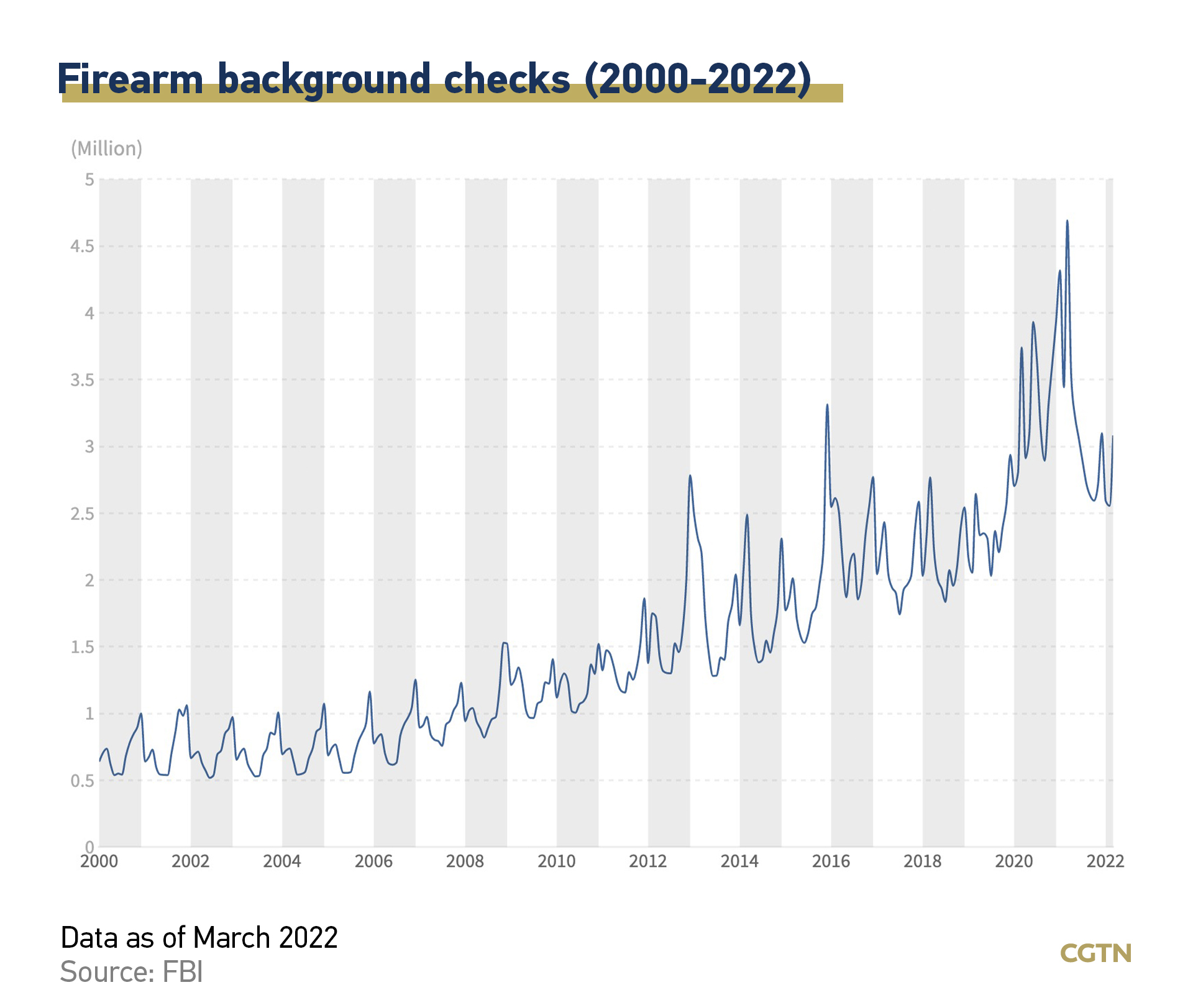 A Pew Research Center survey conducted in April 2021 found around half of Americans (48 percent) see gun violence as "a very big problem" in the country today. That's comparable to the share who say the same about illegal immigration (48 percent) and the coronavirus outbreak (47 percent). 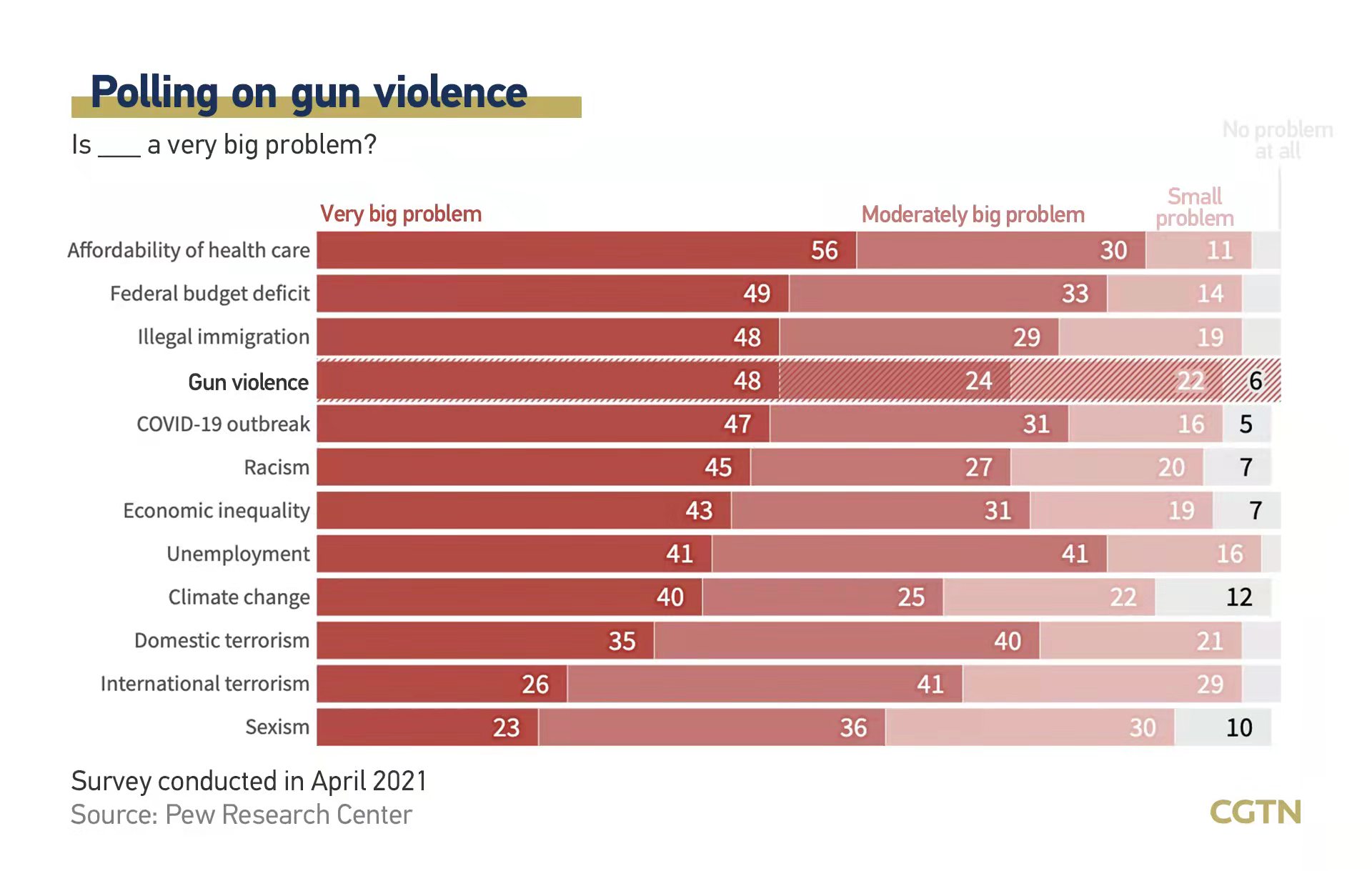 But roughly half of them (53 percent) favor stricter gun laws, according to a Pew Research Center's April 2021 survey. 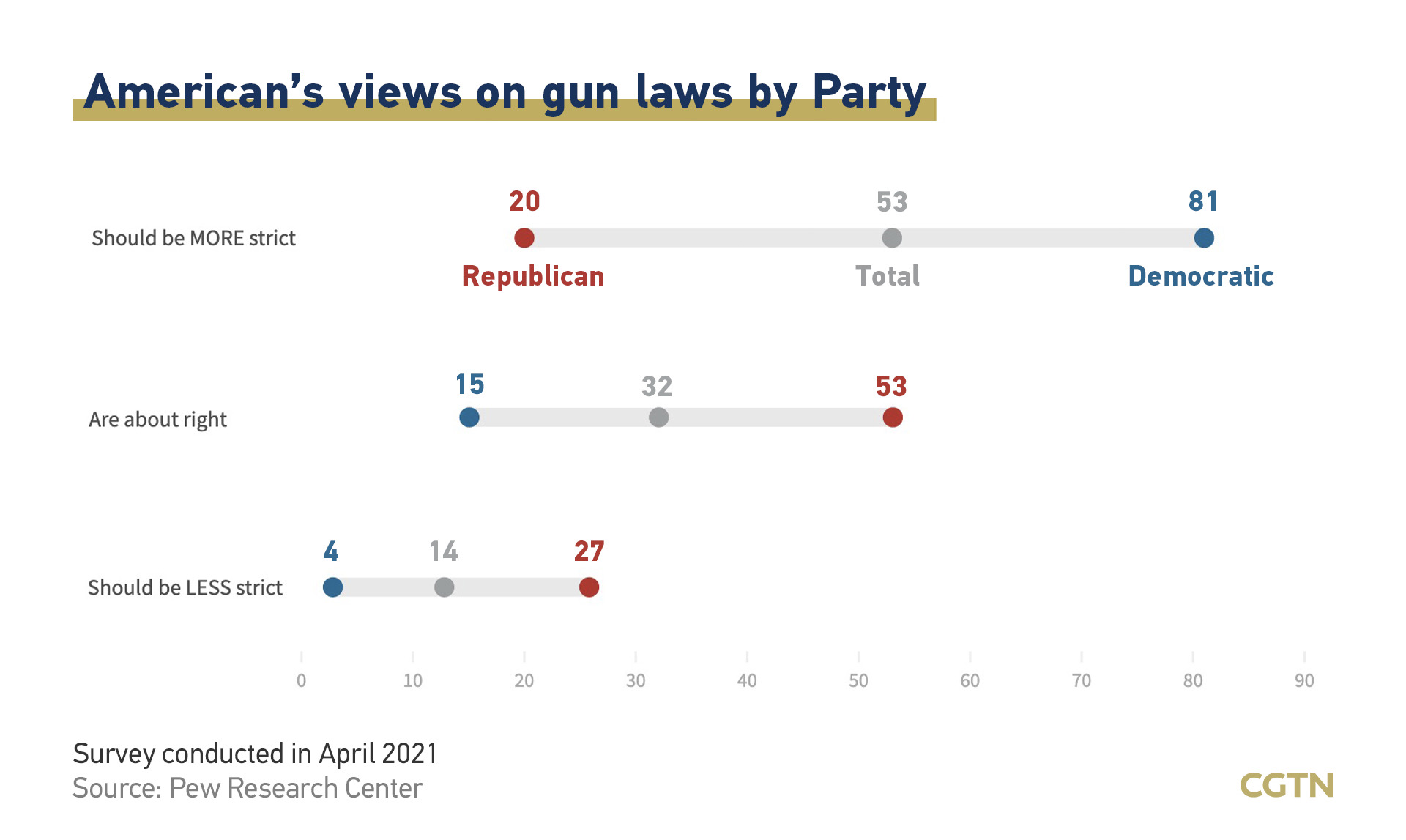 After the worst mass shooting in Sacramento history, U.S. President Joe Biden and gun control advocates across the country called for congressional action on gun control.

"We must do more than mourn; we must act," said Biden.

When he entered office last year, gun-control advocates hoped he and a Democratic-controlled Congress would kick start a new era of laws and regulations tightening access to firearms and reducing gun violence.

During his first joint address to Congress, the president said, "Gun violence has become an epidemic in America."

Graphics: How is Biden dealing with gun violence 'epidemic' since he took office?

But even as tragedies like the one in downtown Sacramento seemingly become frequent occurrences across the country, efforts to pass any concrete legislation through Congress stalled by serious political polarization.

Last year, the Democratic-controlled U.S. House passed two gun control measures backed by Biden, one that would require background checks on all gun sales and transfers, and another that would lengthen background checks from three days to up to 20. But lawmakers in the Senate, which is split evenly between Republicans and Democrats, didn't approve either measure.