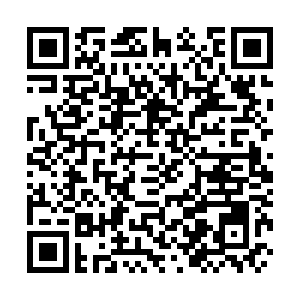 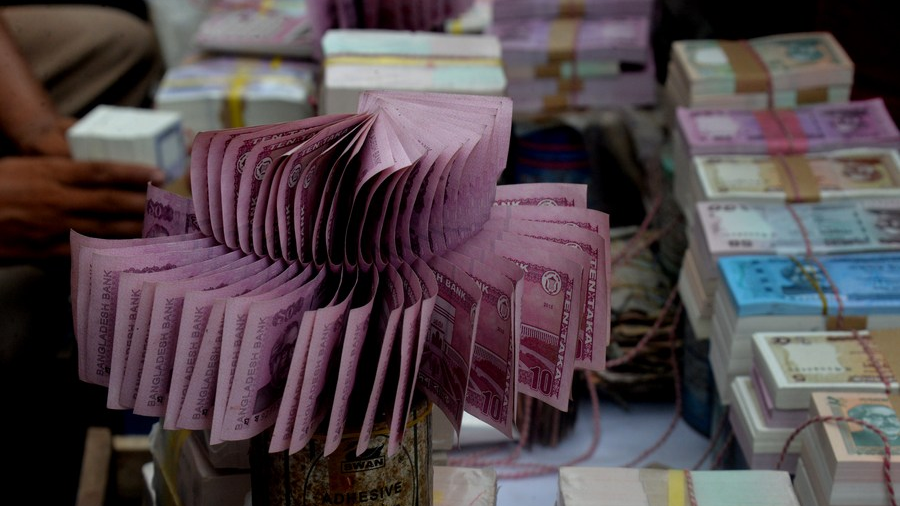 The photo shows bundles of notes of Bangladeshi currency taka at a footpath stall in Dhaka, Bangladesh, June 23, 2017. /Xinhua

The photo shows bundles of notes of Bangladeshi currency taka at a footpath stall in Dhaka, Bangladesh, June 23, 2017. /Xinhua

Bangladesh is moving to trade in local currencies with two of its largest trading partners – China and India – in a decision that could well prove to be a test case for the end of the U.S. dollar's dominance in global trade.

Last week, Bangladesh allowed its banks to maintain accounts in Chinese yuan for overseas transactions to reduce dependency on the U.S. dollar as the South Asian country grapples to contain its dwindling foreign reserves.

And according to media reports on Monday, India's top lender, State Bank of India, has asked exporters to trade with Bangladesh in rupee and taka warning against settling deals in the U.S. dollar to avoid exposure to Dhaka's falling reserves.

The developments come amid calls from the Shanghai Cooperation Organization (SCO) – which has both China and India as its members – for increasing the use of national currencies for trade among the member countries at its leadership summit in the Uzbek city of Samarkand last week. Bangladesh is not yet an SCO member but has applied for observer status in the Eurasian organization.

The South Asian country's $416-billion economy is facing severe stress due to rapidly increasing food and energy prices with the prolonged Russia-Ukraine conflict further widening its current account deficit. Bangladesh is facing a shortage of foreign currency due to higher import bills and a steep fall in the Bangladeshi taka's value against the U.S. dollar in recent months.

The country's foreign exchange reserves fell from $48 billion last year to $37 billion as of last Friday, which is sufficient for import cover for only five months, according to data from Bangladesh's central bank.

No wonder, Bangladesh wants to lower trade dependency on the U.S. dollar and it does not see a problem in dealing in local currencies, as the country's Commerce Minister Tipu Munshi asserted last week. Responding to a query at an event in Dhaka, Munshi said that Bangladesh's finance ministry is studying the issue and working on ways to implement local currency trade with its key trading partners.

Last week, the Bangladesh central bank allowed local banks to carry out overseas transactions in Chinese yuan. It is important to note that China-Bangladesh bilateral currency cooperation dates back to 2018 when Dhaka had authorized dealers to maintain a foreign currency clearing account with the central bank in the Chinese yuan.

The Bangladesh Bank's latest decision followed demands from major business chambers such as the Metropolitan Chamber of Commerce and Industries (MCCI) of introducing a second currency besides the U.S. dollar for international trading amid the surging taka-dollar exchange rate.

The MCCI proposed the Chinese yuan as Beijing happens to be Dhaka's largest trade partner and also the largest source of imports. The fact that China already has a Cross-Border Inter-Bank Payments System (CIPS) with the Chinese yuan as the trading currency was also a factor in Bangladesh's decision.

If Bangladesh creates a mechanism for bilateral trade in local currency with India – its second largest trade partner – as well, as recent reports indicate, it will go a long way in reducing the country's dependence on the U.S. dollar for international trade. 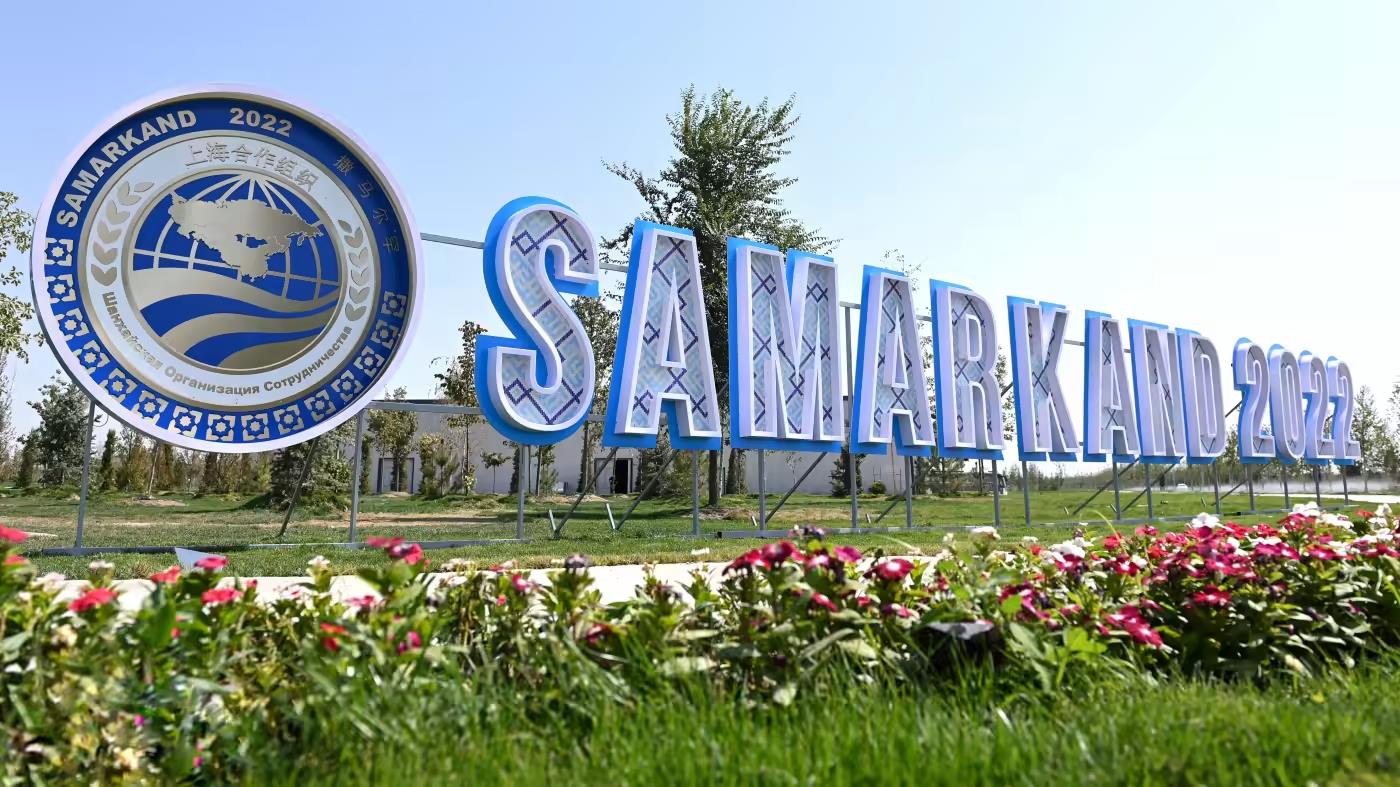 A signboard of the SCO Samarkand Summit is seen in Samarkand, Uzbekistan. /Foreign Ministry of Uzbekistan

A signboard of the SCO Samarkand Summit is seen in Samarkand, Uzbekistan. /Foreign Ministry of Uzbekistan

It is to be noted however that barring China and India, Bangladesh's trade volumes with other SCO members aren't quite significant and therefore some local trade and industry experts are apprehensive about the success of Dhaka's bilateral currency cooperation in the long run. They note that only a part of Bangladesh's international trade could be tackled in Chinese and Indian currencies and that bulk of it will still have to be paid in U.S. dollars.

To deal with this challenge, Bangladesh will need to increase its trade with other SCO countries, which are now increasingly looking to expand international trading in national currencies. The joint declaration released after last week's SCO Summit in Samarkand stated that the leaders "noted the adoption by the interested SCO member states of the road map on increasing the share of national currencies in mutual settlements and called for expansion of this practice."

The SCO prides itself as the world's largest international organization and currently comprises nine member states: China, India, Russia, Kazakhstan, Kyrgyzstan, Pakistan, Tajikistan, Uzbekistan and Iran. Afghanistan, Belarus and Mongolia have observer status while there are nine dialogue partners including Türkiye, Sri Lanka, Cambodia, Azerbaijan, Nepal, Armenia, Egypt, Qatar and Saudi Arabia. According to the Samarkand Declaration adopted by the member states at the last week's SCO Summit, Kuwait, UAE, Maldives, Myanmar and Bahrain will soon be granted the status of dialogue partners.

The nine full members of SCO now represent 25 percent of the world's land area, 42 percent of the world's population and contribute 25 percent to the world's GDP. The Eurasian bloc has seen increasing global trade influence since its establishment in 2001, with its share of global trade rising from 5.4 percent in 2001 to 17.5 percent in 2020, according to China's customs data. The global trade value of SCO member states has grown from just $667 billion (not including India and Pakistan who became members in 2017, and Iran which was included as a member in last week's SCO Summit) in 2001 to a remarkable $6.06 trillion (excluding Iran) in 2020.

With a renewed focus on international trading in national currencies, the SCO can create a potential market for other countries to trade with SCO member countries in their currencies or a mutually-accepted single currency such as the Chinese yuan. This will have a severe impact on the U.S. dollar which has enjoyed the status of the world's leading reserve currency for decades.

If Bangladesh successfully negotiates its ongoing financial distress and overcomes its dollar dependence by trading in local currencies with two of its largest trading partners and perhaps even beyond, it will encourage many other countries to do the same. That could very well be the beginning of the end of dollar dominance in global trade.

Why is Iran proposing a single currency for SCO region?

SCO chief: E-commerce could be a catalyst for gender equality