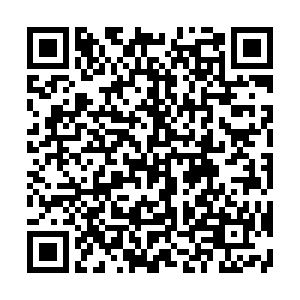 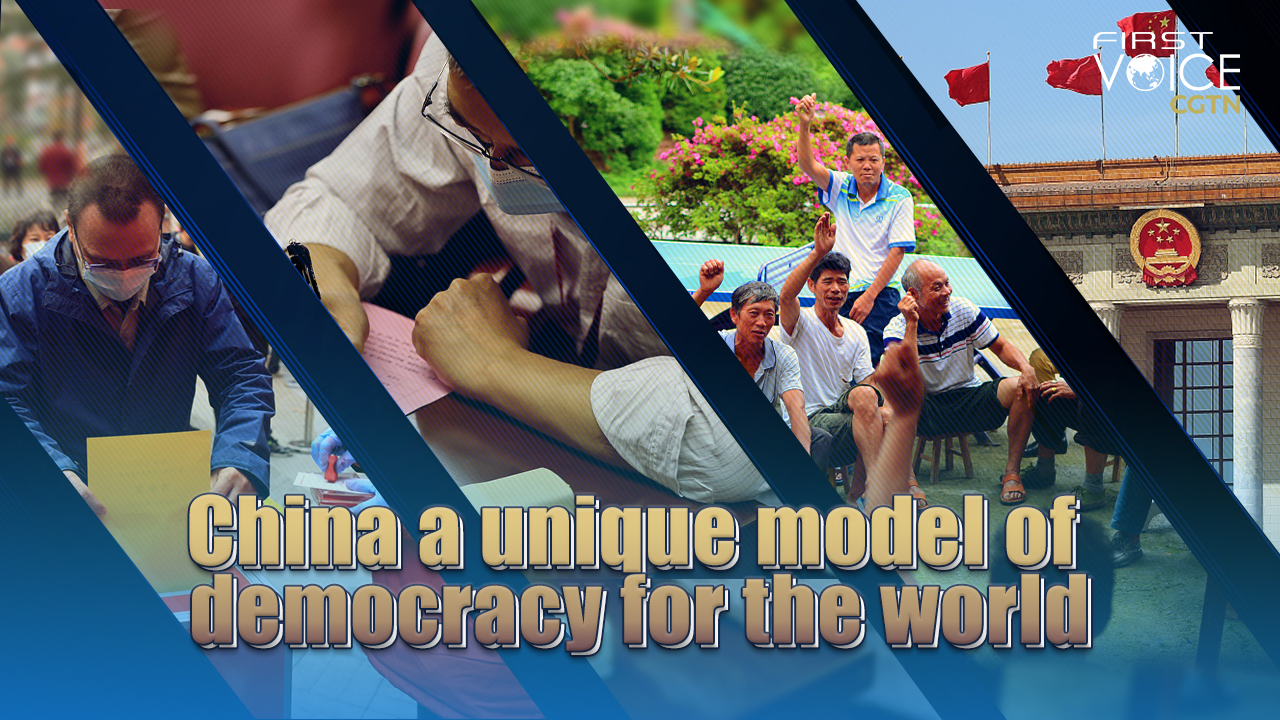 China a unique model of democracy for the world.mp3

Editor's note: Over the past decade, China has made great accomplishments while navigating through a tumultuous global environment. As the 20th Communist Party of China National Congress approaches, CGTN First Voice has prepared a 10-part series titled "The China Path: A Panoramic Decoding" to take you through the landmarks and watershed events over the past ten years and decode the secret of China's development. This is the last part of the series, focusing on China's model of democracy.

'Discuss issues over tea': the quintessence of people's democracy

In the West, people like to chat or talk business in cafes or barrooms; while in China, especially in the countryside, the typical place for such activities is the teahouse. For many years, rural farmers would head straight to the teahouse after waking up in the morning to learn about major global events. This is more of a political-culture tradition than a lifestyle.

In his play Teahouse, Lao She unveiled the mental crisis of the Chinese amid social upheavals in the late Qing Dynasty through the depiction of the Beijing residents' daily lives. The sign posted on the wall of the teahouse, "Do Not Discuss State Affairs," underscored that the teahouse was always the place where Chinese "discuss state affairs."

Many teahouses in Linhuan Town of the Suixi County in Huaibei, Anhui Province open when the day just starts. For six centuries, the tea-drinking tradition there has passed down the generations. Today, the teahouses where people used to "discuss issues over tea" have transformed into "the people's congress delegates' consultation rooms" where delegates at the county and township levels talk to members of the electorate monthly on the consultation day.

"This is a practice of the whole-process people's democracy at the grassroots level," said He Weijun, former chairman of the Linhuan Town People's Congress.

60-year-old Linhuan Village resident Liu Jinhua is a frequent visitor of teahouses. He loves to chat with his village folks about the township and village affairs, large and small. "In the teahouse, we feel free to say whatever is on our minds," he said. For over 10 years, Zhang Yunxiao, a villager in his 70s, remains a "fixture" to teahouses, attending almost every delegates' consultation session as long as he is free to join in. He said he felt his voice had mattered when his suggestions were taken.

Over the past five years, issues of common concern to the public such as road building and street lamp repairs were all addressed through the "discuss issues over tea" mechanism. The report also shows that each teahouse has a mediation room designated for the resolution of disputes in the people's daily lives. In recent years, teahouse mediators across Linhuan Town have mediated over 1,500 disputes, achieving a success rate of 95 percent.

The most notable feature of China's democracy is the direct participation of ordinary people. This, among the different types of democracies in the world, is what is known as "participatory democracy" where the main participants of political decisions are the people rather than political parties and their representatives. 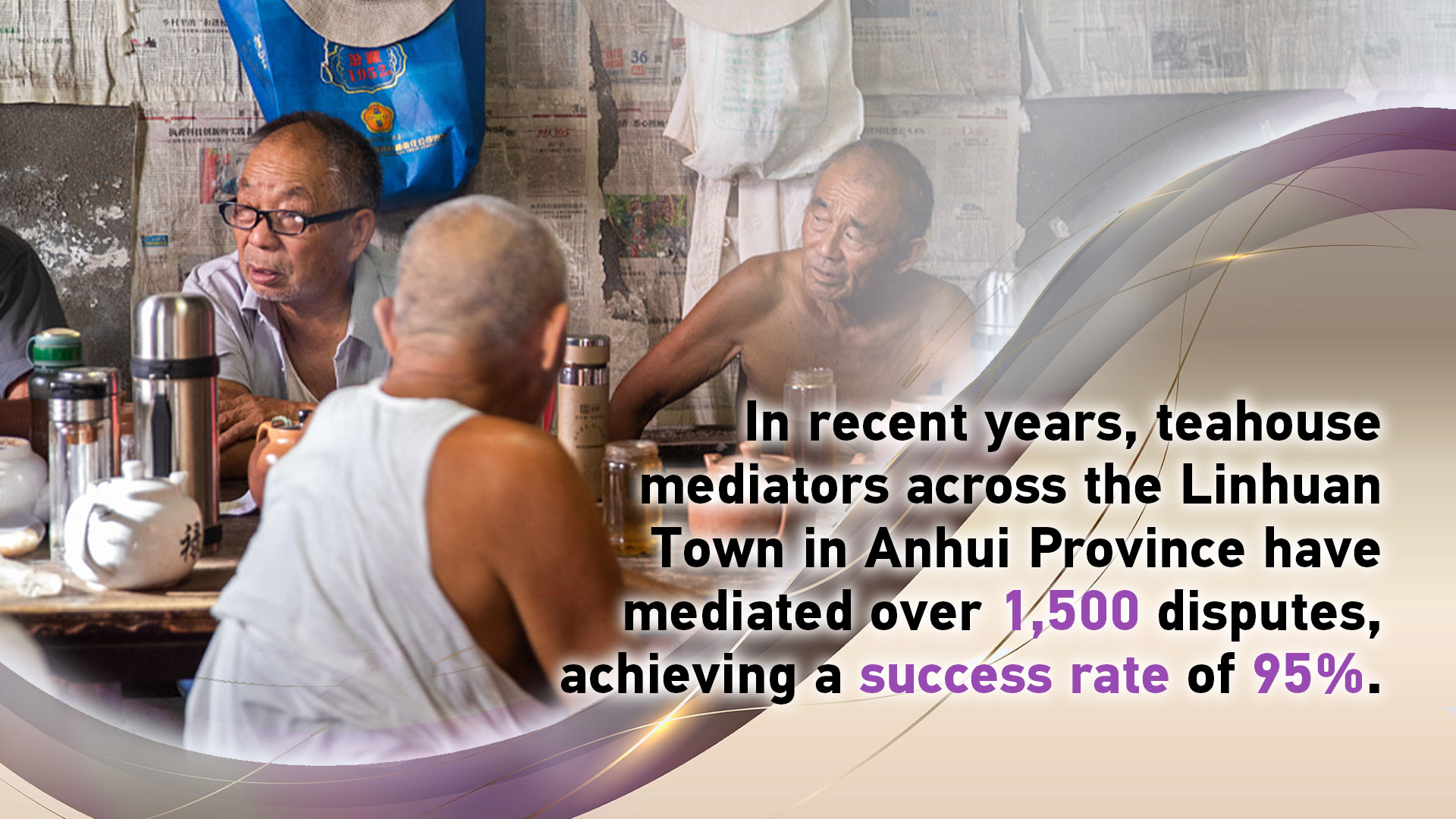 For Dong Yang, head of Linhuan Town, democracy is not only about elections. It is fulfilled to its greatest potential when the people participate in social governance by a diversity of means. Presently, officials of the local government regularly walk into teahouses to listen to people's opinions. "Practicing people's democracy is the only way to channel the people's wisdom and strength into our work," said Dong.

Chinese President Xi Jinping offered a unique insight on democracy. He said, "Under China's socialist system, whenever a problem occurs, those concerned should always hold deliberations in good faith. Matters involving many people are discussed by all those involved; to reach the greatest common ground based on the wishes and needs of the whole of society is the essence of people's democracy."

What does it mean by "whenever a problem occurs, those concerned should always hold deliberations in good faith; matters involving many people are discussed by all those involved" and "reach the greatest common ground based on the wishes and needs of the whole of society?"

To understand the real "essence of people's democracy," one must understand China's democratic consultation, which is the most notable and a unique feature of China's participatory democracy.

China's democracy is an integration of two major democratic models – electoral democracy and consultative democracy. While the former is realized through the electoral and representative mechanisms of the National Congress of the Chinese Communist Party and the National People's Congress (NPC), the latter is an important model where different sectors within the people, under the leadership of the Communist Party of China (CPC) and through extensive consultations, work to reach consensus over the making and implementation of decisions on major issues concerning reform, development and stability, and on matters bearing on the vital interests of the people.

In China, it is required that the decision-making process can be initiated only when consensus is reached on a matter through consultation. This is a distinctive feature and advantage of China's socialist democratic politics.

Meanwhile, dedicated channels through which netizens could air their thoughts were set up on the Internet to integrate the opinions of the people into top-level policy design. For instance, An estimate of 1.018 million pieces of advice were received through online channels before the CPC made proposals on formulating the 14th Five-Year Plan for National Economic and Social Development. 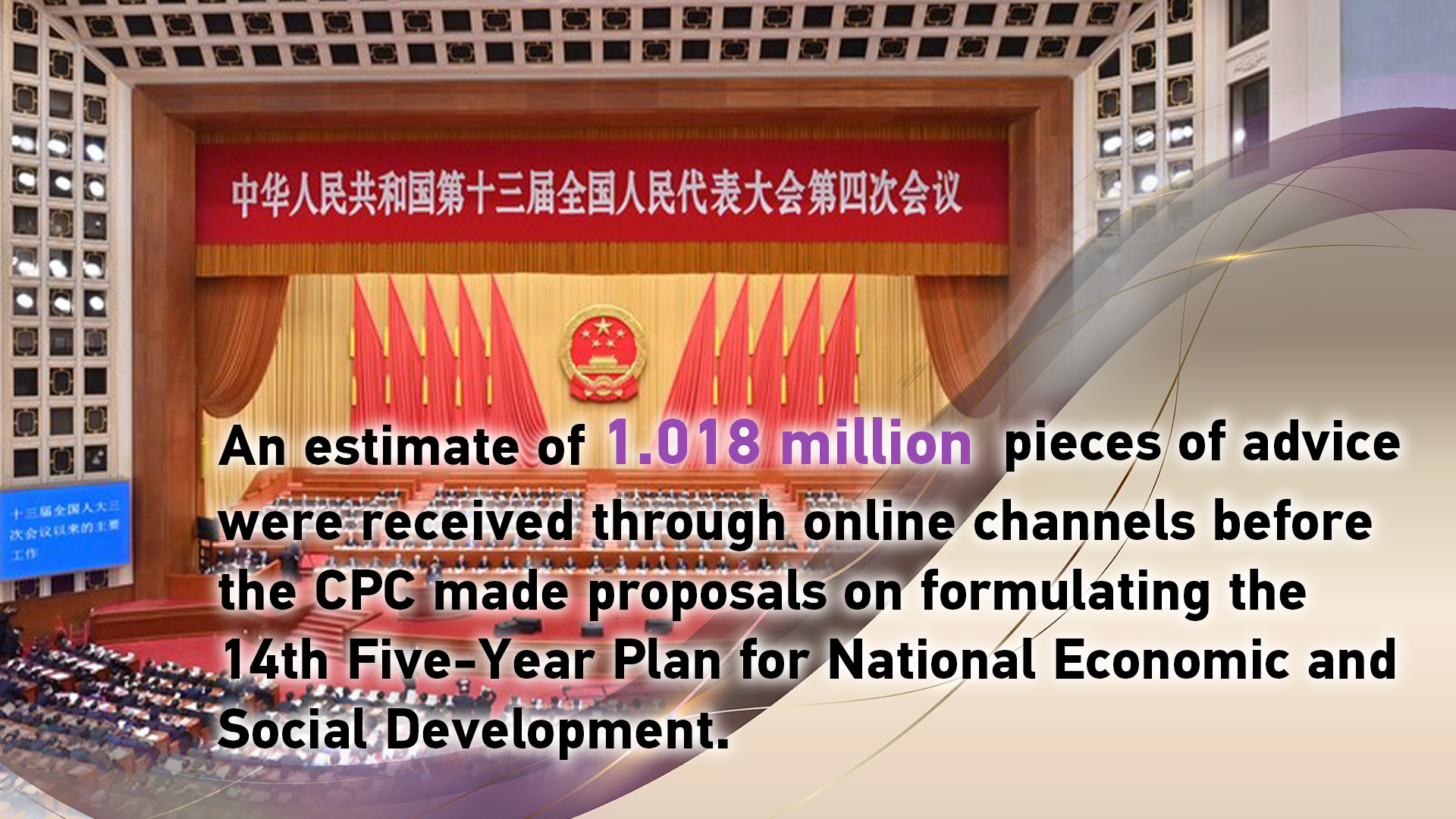 Opinions and suggestions gathered by these means were of great importance for the CPC Central Committee to finalize the "proposals." Therefore, China's democracy, with democratic consultation, is a model that allows the extensive participation of the people in the whole decision-making process.

At a ceremony marking the 65th anniversary of the the Chinese People's Political Consultative Conference on September 21, 2014, President Xi insightfully noted that if the people merely have the right to vote but no right of extensive participation, in other words, if they are only awakened at election time but go into hibernation afterwards, then this kind of democracy will only be a formalistic one.

China's democracy is a whole-process democracy, which allows the people to exercise their democratic rights in all aspects, including the selection of officials, decision-making, legislation, management and supervision, etc.

For instance, all Beijing residents knows they can reach the government for help when experiencing difficulties or problems in public life by calling the "12345" hotline from anywhere and anytime.

In his speech at a ceremony marking the centenary of the CPC, President Xi said, "we will… practice a people-centered philosophy of development" and "develop whole-process people's democracy." The idea that the people are the masters of their country lies at the very heart of China's success.

China's democracy: a unique model for the world

Democracy is a value shared by all humanity. But is China a democracy? History has given us the answer.

The founding of the People's Republic of China in 1949 signified that a quarter of the world's population had stood up and marked the ultimate transformation of the country from the rule of feudal autocracy, which had been in existence for several thousand years, to a people's democracy. 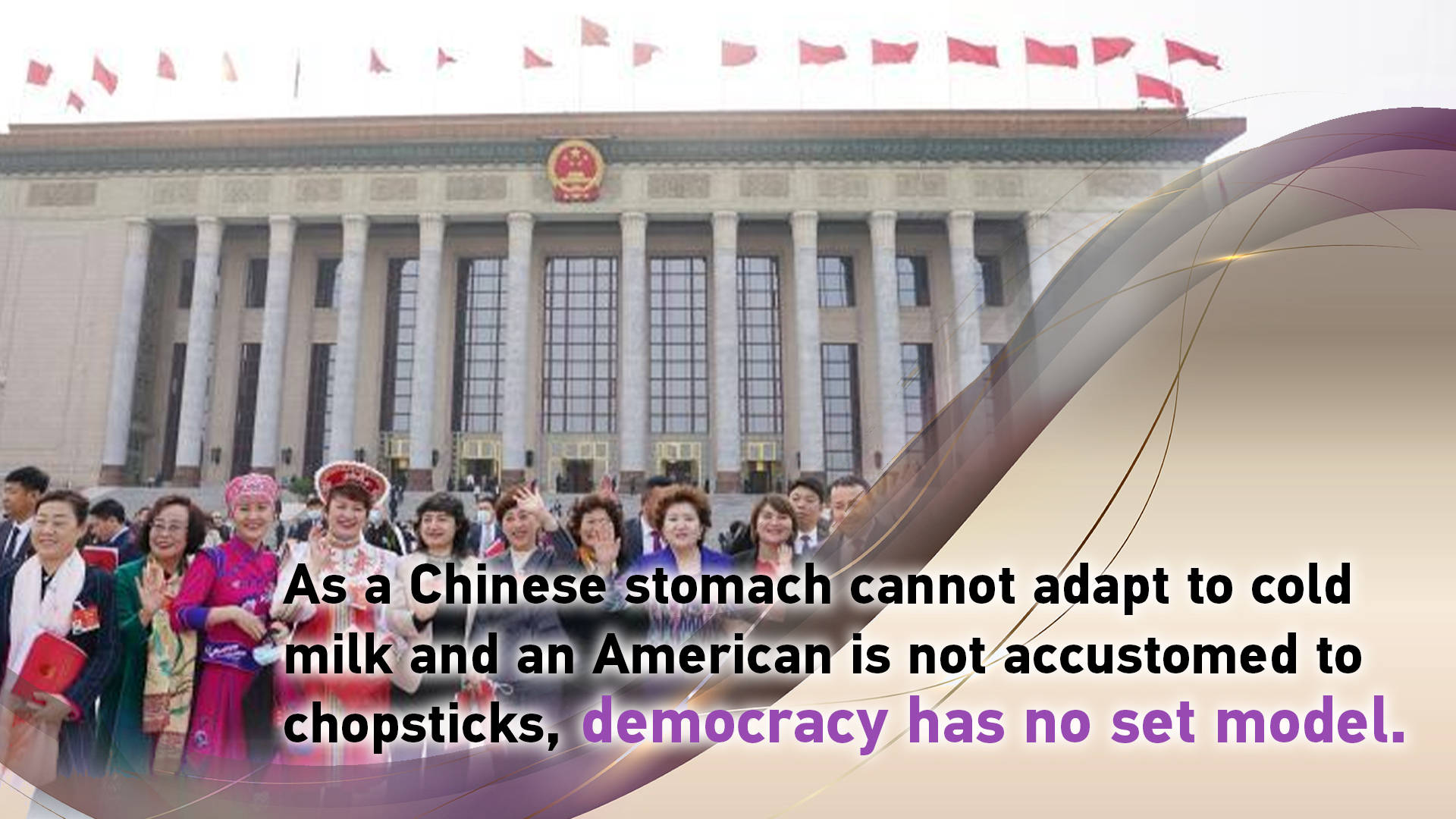 When the Chinese people, led by the CPC, were fighting bloody battles for people's democracy, where were those countries that accuse China of being undemocratic? They sided with the dictatorial reactionary government and never did anything in support of Chinese people's struggle for democracy.

Not only so, they even supplied dollars and weapons for the reactionaries to slaughter the Chinese people. Such countries and their politicians are in absolutely no position to talk about China's democracy. Those who are most entitled to do so are the 1.4 billion Chinese people.

As a Chinese stomach cannot adapt to cold milk and an American is not accustomed to chopsticks, democracy has no set model. China's whole-process democracy, with its unique charm, is practical on the Chinese soil. It ensures people are the masters of their country and their own destinies. China stands tall as a unique model of democracy for the world.

(Contributed by Li Junru, former vice president of the Party School of the CPC Central Committee)

Part nine: No person left behind in achieving common prosperity